Hirst and Hix light up Waterloo

The food at most art gallery and museum in-house restaurants tends to be mediocre bordering on abysmal. Club sandwiches that you wouldn’t want to be seen dead with and Caesar salads almost as old as Rome itself are usually the order of the day. Pharmacy 2 shows that doesn’t have to be the case. This joint venture between enfant terrible artist Damien Hirst and serial restaurateur Mark Hix is the in-house restaurant at Hirst’s Newport Street Gallery and stays open for dinner after the gallery has closed.

It’s oddly located in a mostly residential area, but it’s a short walk from Waterloo, Lambeth North and Vauxhall stations. If you know how to use Google Maps on your phone, then you’ll be fine. Like the original Pharmacy, long since closed, Pharmacy 2 is decorated like an actual chemists with pill bottles, medicine packets, bandages and other pharmaceutical paraphernalia and insignia lining the walls and bar. It’s a strikingly playful interior, especially when you spy trains on the elevated track across the street through the stained glass window – the flickering lights indicative of the bustling metropolis beyond. 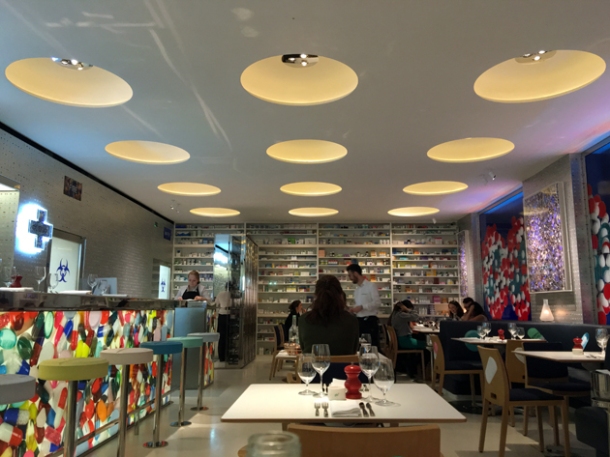 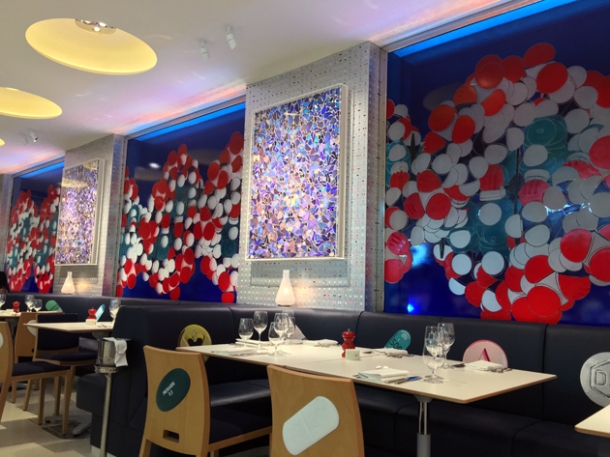 Are those ball-and-stick molecular models accurate? 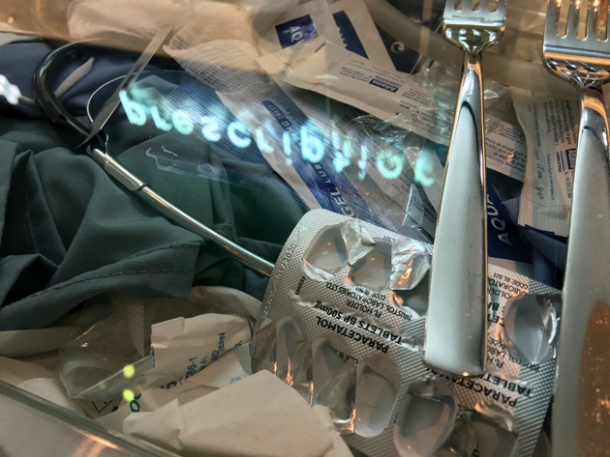 I mewed into the void. And the void mewed back. 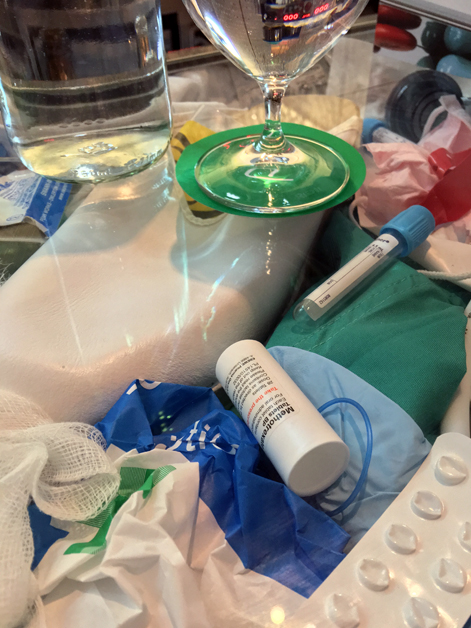 I guess the advantage of being located on the first floor away from street level is that no one will mistake it for an actual chemists.

Pharmacy 2’s menu (which has changed around once a month so far) isn’t as adventurous, sticking mostly to comfort food classics – I suppose the conceit of Pharmacy 2 is that the food here cures you or some such subliminal marketing puff. It all seems faintly ridiculous at first glance, but I came to like the place in spite of myself. This was no doubt helped along by the charmingly friendly staff.

Cuttlefish croquettes had a moderately crisp crumb coating free of excess oil, but the inky black filling was little different from mushrooms. At least the dipping mayo on the side was umami and mildly peppery. 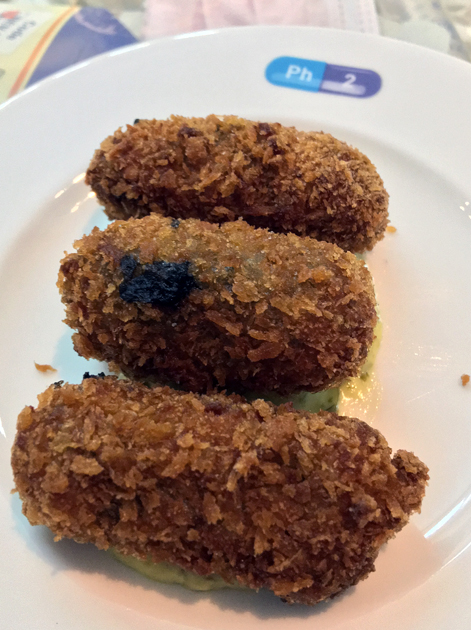 The Physical Impossibilities of Death in the Mind of Someone Living

Although the menu consists mostly of dishes that shouldn’t faze all but the most UKIPpy of grandfathers, there are a couple of more challenging dishes. The Hunan spiced pork arrives as a chewy, meaty pattie dotted with crisp peppery herbs. It’s served submerged in a broth dominated by ginger and sharp, peppery celery. The strong and uncompromising flavours won’t be to everyone’s taste, but I appreciated its distinctiveness. 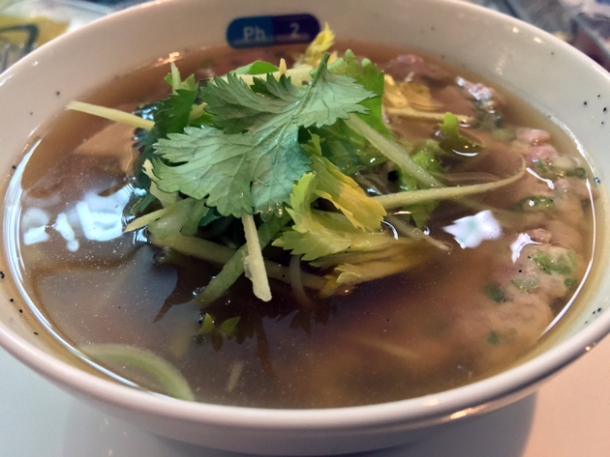 Beautiful Inside My Head Forever

Pharmacy 2’s lamb pie is a pot pie, but the quantity of pastry, specifically the comparative lack of it, shouldn’t dissuade you from ordering it. The buttery crust had a light beery oomph with a bit of bone, sadly bereft of bone marrow, sticking out of the centre. The lamb chunks bobbing about in broth underneath the pastry crust were merely okay, outclassed by firm offally kidneys and reasonably rich sweetbreads. Although the latter could’ve been more sumptuous, this was still a very pleasing pie – especially when taken with a side of light, fluffy, mildly mustardish mash. 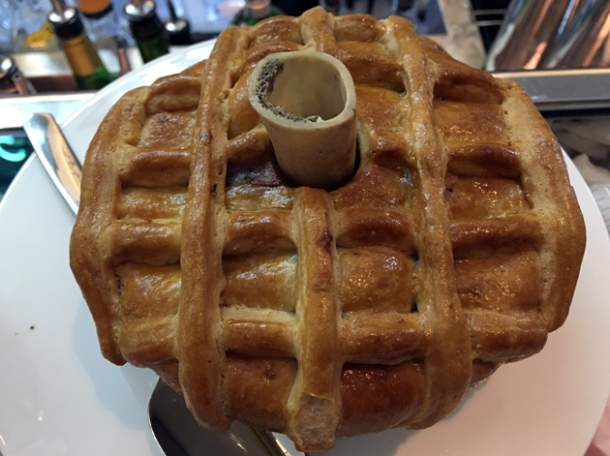 Away from the Flock 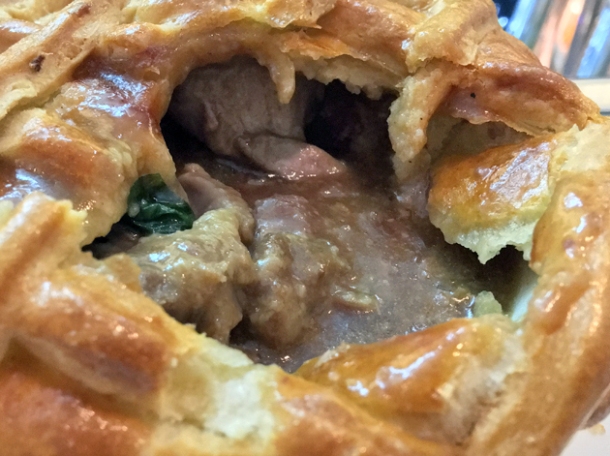 Coincidentally, the Jolly Giant and I discussed the semantics and classifications of pie before I had this meal. Are pot pies and pies that use a potato topping instead of pastry, like cottage pies, really pies at all?

A side of buttered kale hearts were pleasingly bitter and moreish. 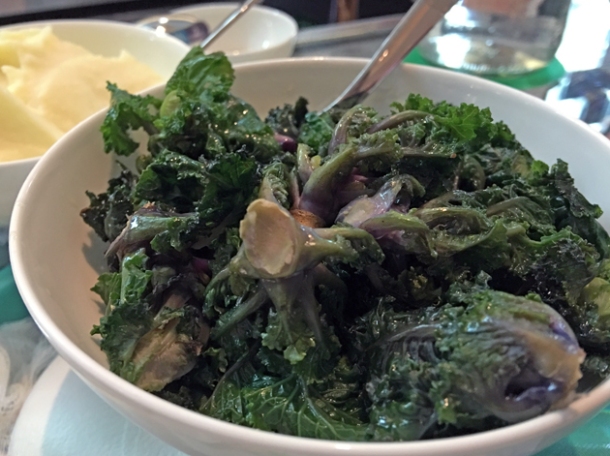 Poached rhubarb was tender, but surprisingly bland. It was left to the excellent saffron ice cream to save this dessert – smooth, elastic and unmistakably flavoured. 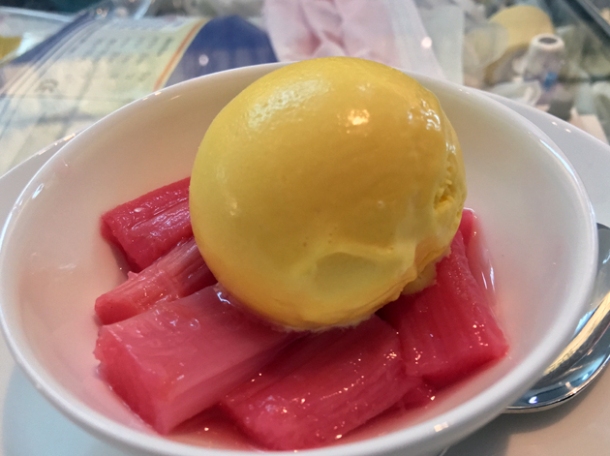 Kingdom of the crystal skull.

The crispy prawn kale could so easily have been a retread of the buttered kale hearts from my first meal, but it was different. Crisply delicate leaves were garnished with a dusting of crushed prawn shells for a subtle hit of salt and umami. It’s like the imitation crispy seaweed you get in Chinese takeaways, but better. 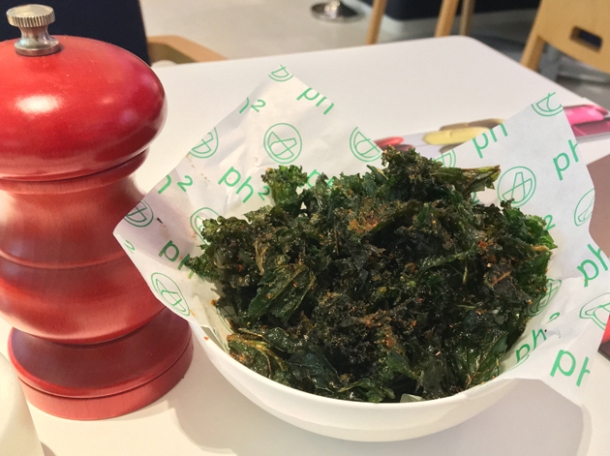 Steak tartare was tender, but didn’t have enough chew. The lackadaisical capers and only moderately rich egg yolk were also disappointing, making for an underwhelming meaty starter. 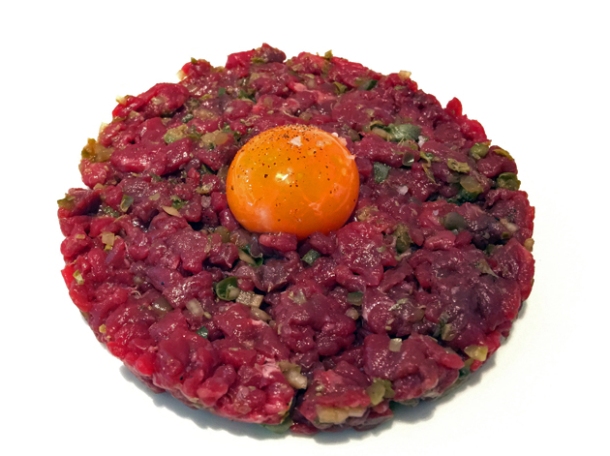 Although the poultry chunks in the duck curry had only a mild earthiness that faded quickly, this was still a satisfying if by-the-numbers curry thanks to the cumulative tingliness of the madras-style sauce (also available in a mild variant) as well as the firmness of the meat and the medium grained rice. The apple pakora served on the side was only modestly sweet and a tad too oily, yet retained a measure of pleasing crispness. 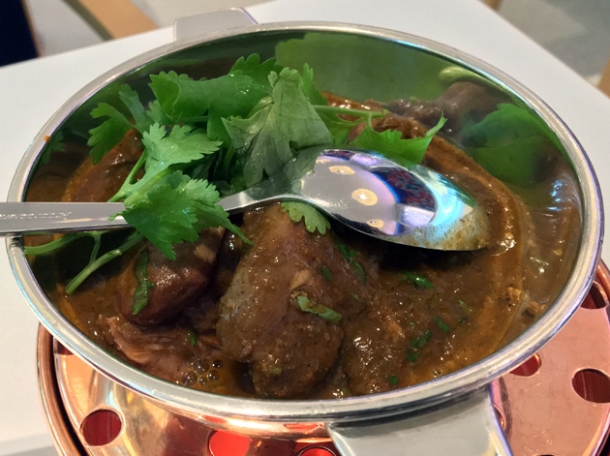 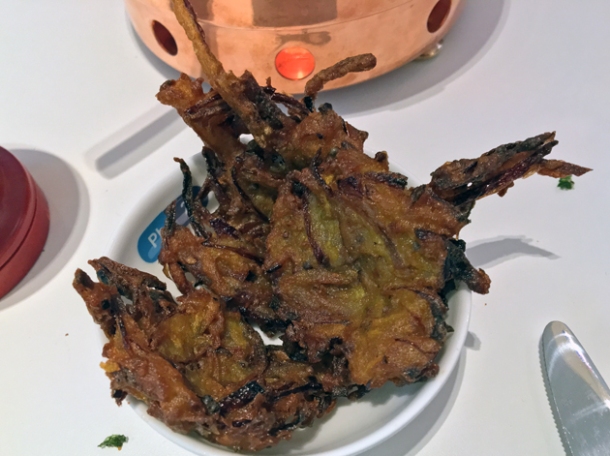 The dessert portions are all small, allowing you to pick and mix. Bread and butter pudding was top notch with a delicate squidginess and a light buttery custardishness. The honeycomb and chocolate mousse was less successful. The soft and light mousse only had a mild bittersweetness and just a vague hint of crunchiness from the minuscule amount of crushed honeycomb garnish. 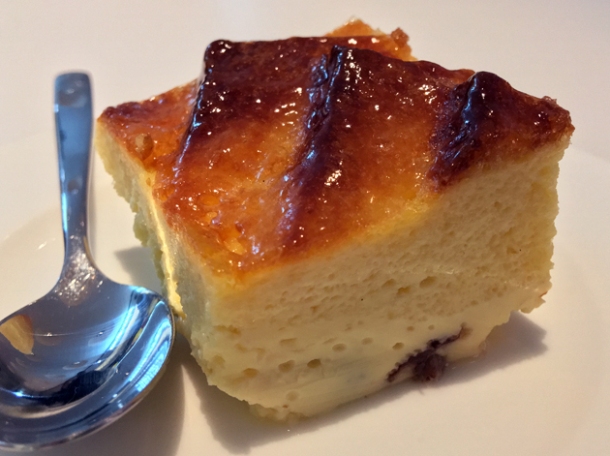 Yes, I used two made-up -ness adjectives to describe this pudding. I don’t much care. 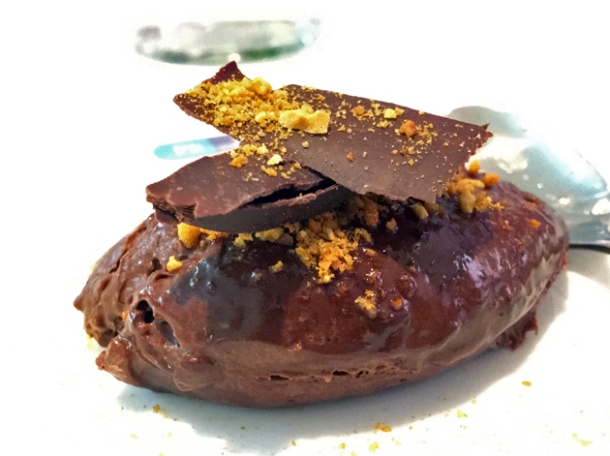 If you’re going to do a honeycomb dessert, either exceed the standard set by Wild Honey or stay at home.

As a non-pisshead I’ve had a lot of rubbish Virgin Mary mocktails, but Pharmacy 2’s Bloody Shame isn’t one of them. This tingly concoction actually tasted of tomato, chilli and Worcestershire sauce. That might sound like a backhanded compliment, but it’s no mean feat for a booze-free Bloody Mary. 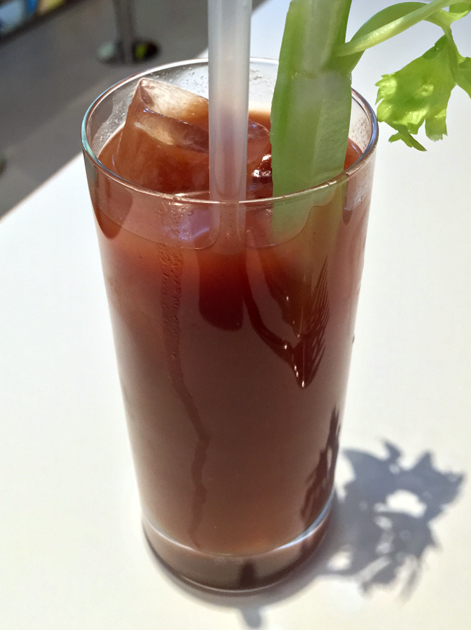 Nothing to be ashamed of.

I’ve had plenty of pig and cow chitterlings (or intestines if you’re not into cutesy names), but never cod chitterlings until now. The fish innards were more akin to pig chitterlings than Japanese squid innards, my only other point of comparison. Soft, mildly salty and fried just so, they were subdued and subtle, even when taken with the accompanying chorizo, rather than punchy and forthright. 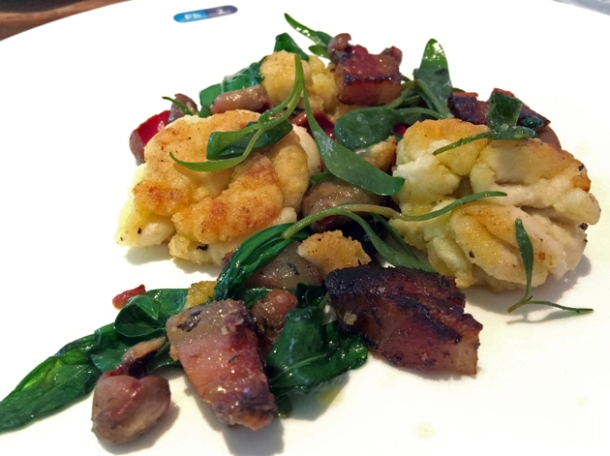 Grilled chorizo as a solo act tasted much as I expected – meaty with a little piquant oiliness that was enhanced by the Romaesco sauce. 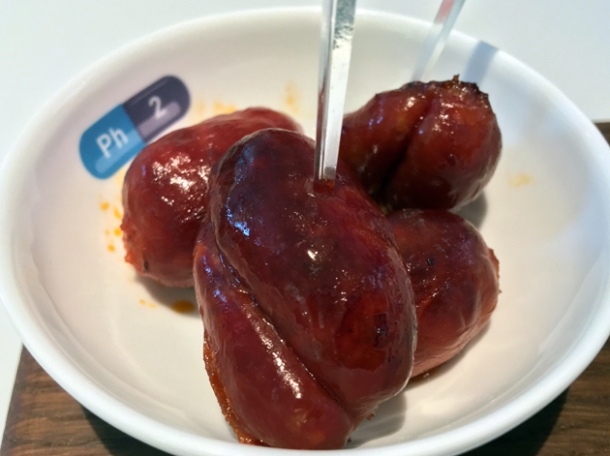 Chorizo turned up again as an accompaniment to big chuffing scallops. The molluscs had a firm bite and a delicate inner texture. Most of the evocative sea salt flavour came not from the white flesh, but from the orange coral roe instead. The sea kale left me unmoved, while the chorizo tended to overpower the scallops and were best taken separately. Although not perfect, this dish was still enjoyable. 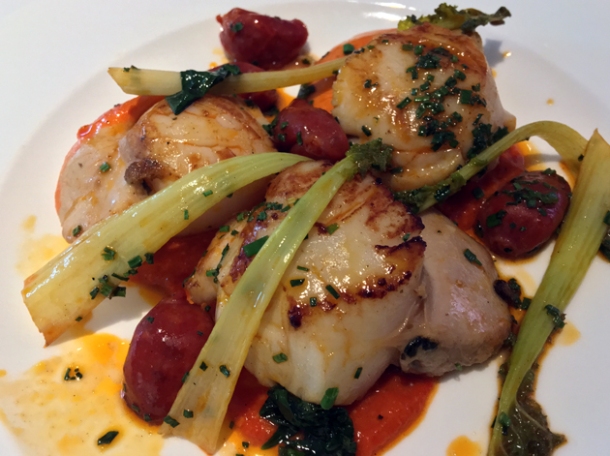 Scallop anatomy is fascinatingly intricate. To a layman at least.

Disappointingly, the chips weren’t chips at all but fries. At least the thin potato stalks were consistently crisp and golden with a mild fruity sweetness. 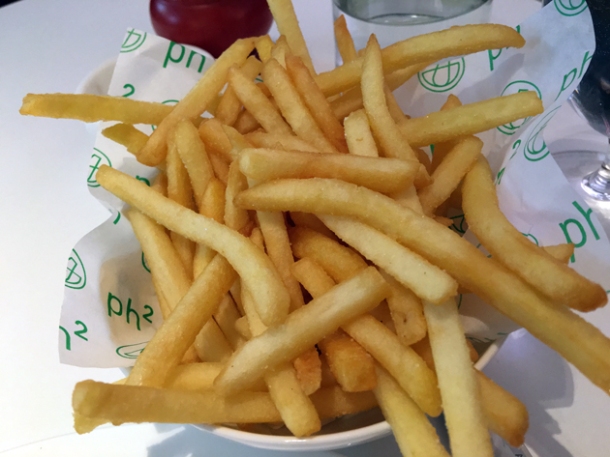 I Want to Spend the Rest of my Life Everywhere, with Everyone

The light sponge of the upside down pineapple cake had a cumulatively strong taste of the fruit from both the preserved pineapple pieces studding the cake and a flavoured syrup. It had a retro charm that was almost matched by the timeless quality of the creme brûlée, but here the kitchen fell down a little. The crust was crisp and didn’t stick to my gums, while the custard was creamy and eggy, but lacking in vanilla flavour despite the copious amount of vanilla seeds present. It’s still more than good enough to be worth ordering and savouring though. 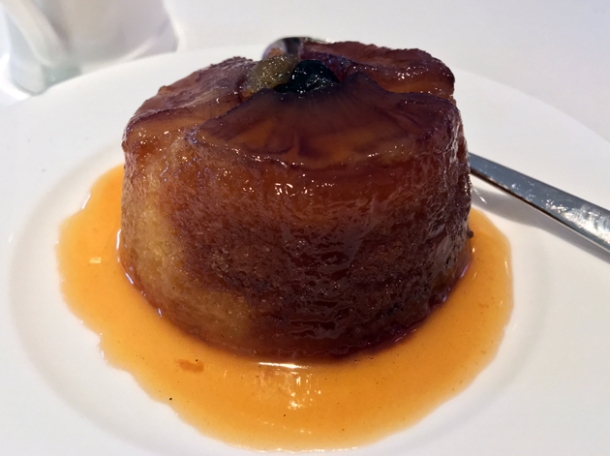 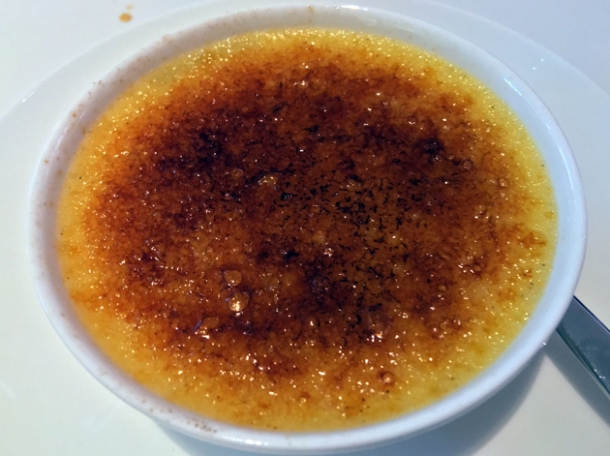 One of the more unusual dishes on Pharmacy 2’s menu is the brik, a dosa-esque pastry shell filled with a rich and runny duck egg yolk. Although this Tunisian dish’s reputation among Magrebophiles is somewhat overinflated, it’s still pleasing and the version here compares very well to the briks I had in Tunisia itself a few years ago prior to the revolution. From the yolk and the crisp, light and buttery pastry to the chunky harissa, which was actually piquant, it was a light yet satisfying starter. 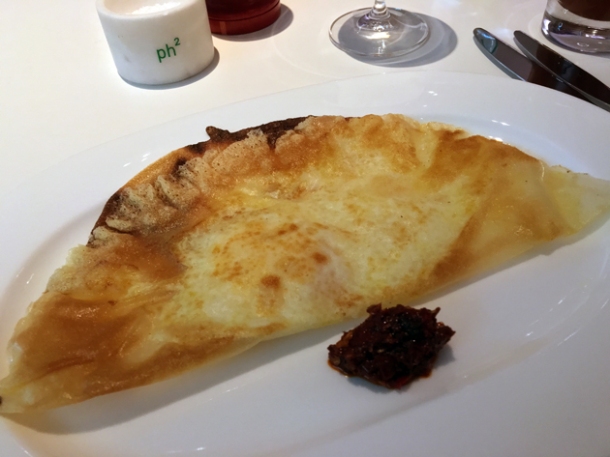 Fisherman’s Spelt was very paella-like, but with fluffy, bisque-infused spelt taking the place of rice. The carefully budgeted for selection of seafood varied in quality. The two curled scrolls of squid were firm, while the trio of mussels ranged from briney to funky. The singular scallop was firm and meaty if a touch muted, while the two bits of monkfish were oddly and disappointingly detexturised into borderline mush. The supply chain bean counters have muddled what could’ve been a superlative dish. 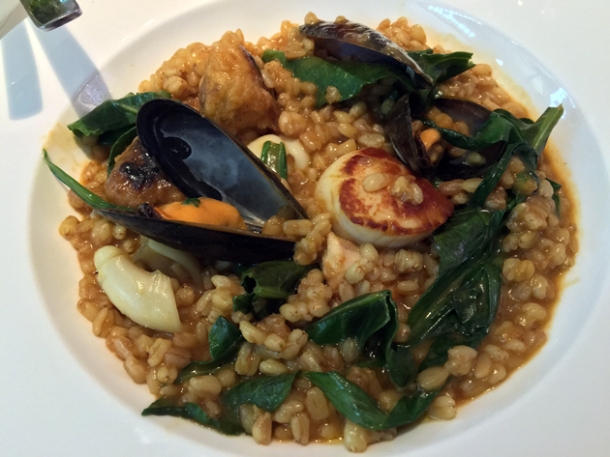 Like a paella, but without the Pavlovian memory of your parents being conned into buying a time share on the Costa del Sol. A timeshare sweetened by a free portable radio. An AM portable radio. The beasts.

At least the lettuce and herb salad was crisp and light with a fruity, peppery and vinegary dressing. 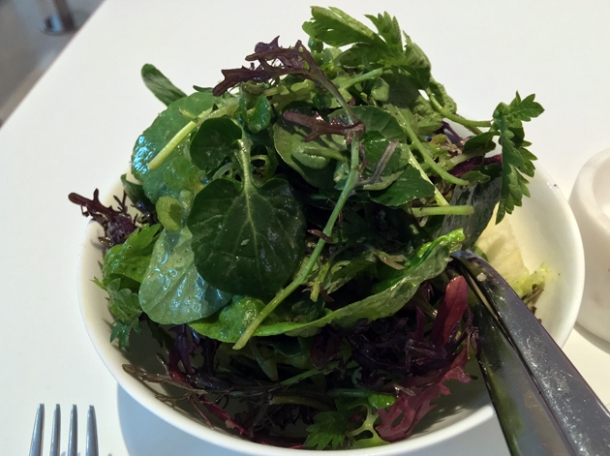 Absinthe jelly is not a dessert for those of you with a dainty composition. Despite its delicate, quivering texture, it was stridently astringent and boozy – almost like cough medicine. It’s very much an acquired taste – I’m glad I had it, but I wouldn’t order it again. 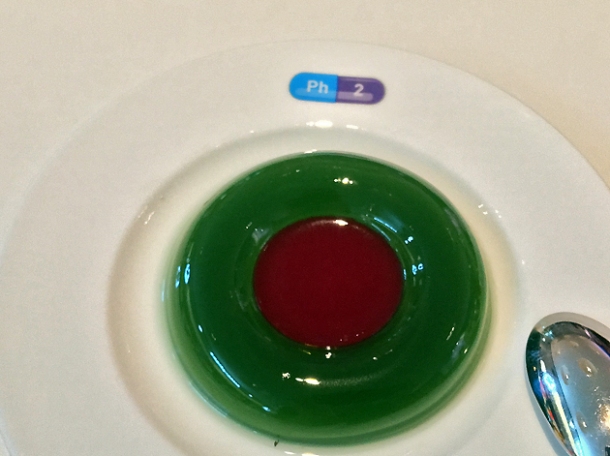 As a non-drinker, I’ve never had absinthe before. If this is what it’s supposed to taste like, then I’m not sure I see the appeal

Raspberry and white chocolate cheesecake was moderately creamy and had the sharp sweetness typical of raspberry, but the minimal biscuit base and underwhelming white chocolate made me glad that this wasn’t my one and only dessert here. 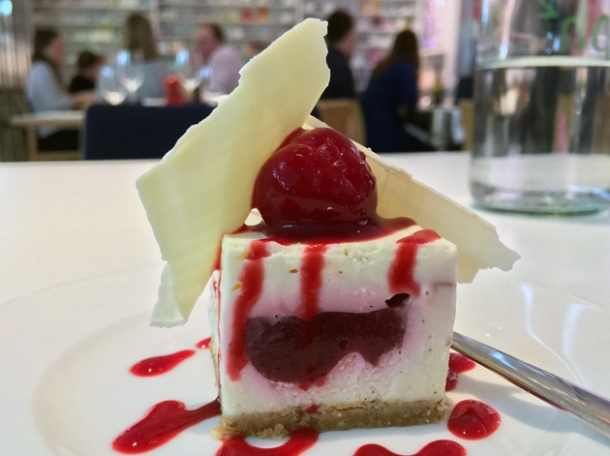 Pharmacy 2’s crowd-pleasing comfort food menu and Hix’s involvement suggest a prototype for a franchise template to improve the quality of gallery/museum catering. Hirst’s involvement seems to preclude anything so mundane and prosaic though, suggesting ‘worthier’ aspirations of becoming a singular dining destination in its own right.

While local Southwarkers and tourists in the many nearby hotels should definitely make their way to Pharmacy 2, there’s little reason for Londoners from farther afield to do so – unless you happen to be in this part of town or just want to admire the decor. Despite the consummate charm of both the staff and the interior’s appearance, the menu just isn’t exemplary enough to deserve your regular devotion and cash.
What to order: Hunan spiced pork; Lamb pie; Mash; Buttered kale hearts; Brik; Bread and butter pudding