The successor to Newman Street Tavern

I rarely get upset when a restaurant closes, no matter how good it was. At the risk of sounding trite, nothing in this life lasts forever. Even so, I was mortified to hear that Newman Street Tavern, an elegant restaurant serving reliably well-crafted French-ish dishes, was closing to be replaced by a vaguely Australian-themed restaurant from the same owners. My scepticism wasn’t assuaged by the maître d’s incredulous explanation that the change was made to appeal to ‘feminine’ diners wanting lighter dishes – needlessly gendered approaches to anything are patronising to say the least.

Dickie Fitz is, if nothing else, an attractive place. The vaguely country club decor of Newman Street Tavern has been jettisoned in favour of a light and airy interior vaguely art deco in style. The front door leads directly into the dining room, but a thick curtain keeps the draft out. Beware of the last-ditch no-reservations bar seating though – it can be uncomfortable if you’re a short arse.

The beef tartare was an odd dish with minimal texture and only a mild hint of capers. Mini egg yolks, possibly quail in origin, were rich and runny but this couldn’t totally compensate for the non-presence of the chilled and formless raw beef or for the odd and needless presence of lotus root and radishes. A poor start. 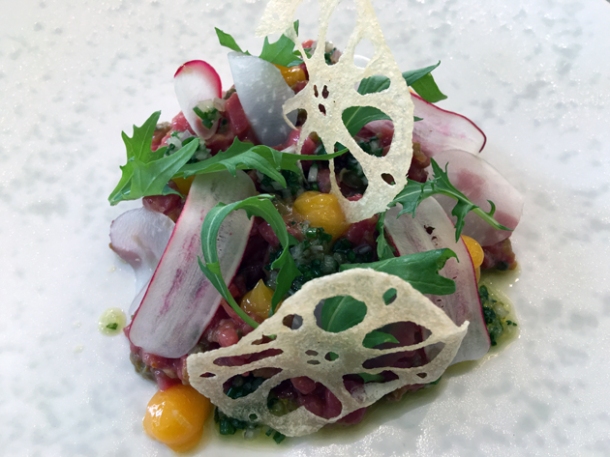 Firm and meaty barramundi had a bouncy bite to it as well as a salmon-like funk. The fish was served with taut cabbage and yieldingly soft daikon, but the puddle of dashi was far too tame though with barely any umami.

I’ve never encountered kale hearts before, but I’m instantly a fan of Dickie Fitz’s version – firm and bitter with a buttery quality.

Why have I not had these before?

Soft and squidgy Lamingtons, on the other hand, were a disappointing letdown given their vaunted Antipodean fame. A vague chocolate flavour was outweighed by the heavy dusting of dessicated coconut. It’s similar to a Tunnock’s Snowball, but with squidgy sponge in the place of marshmallow and, outside of Australia at least, without the old school charm.

A far better dessert was the yielding panna cotta in the shape of a roll. The gentle but still distinctly herby and tart taste of kaffir lime was neatly complimented by the tart and sweet apple sorbet. The sorbet managed to be refreshingly cool without being bone chillingly icy.

Cauliflower gyoza were much more like tortellini, both in shape and texture. The oddly airy, but bland ricotta-like filling and thin slices of underwhelming cauliflower let the garnish of nutty pine nuts and gently sweet raisins take centre stage. Given how sharp and creamy the best cauliflower dishes can be, these haphazard tortellini were a real disappointment. 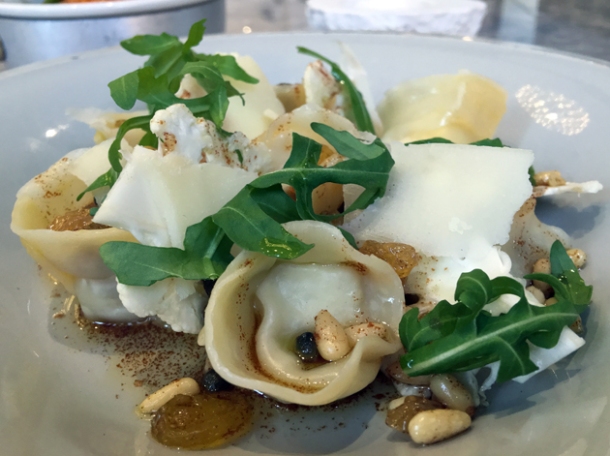 Green beans were a tad too soft, but dressed in a mildly piquant sambal-style sauce dotted with crisp and nutty almond shavings. A firmer bite would have been better, but this was still a good side. 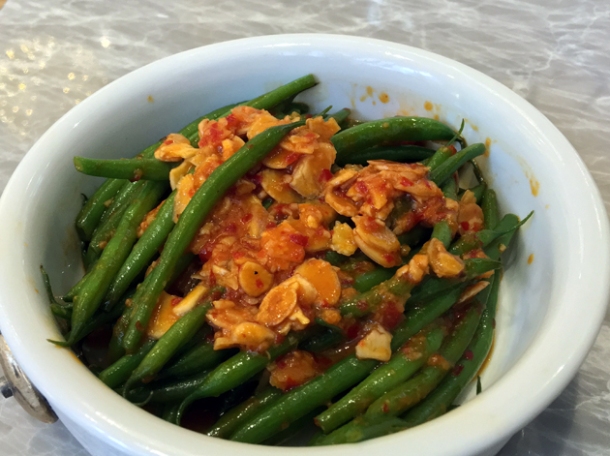 Although light, the lemon tart had too little pastry and a one-dimensional tartness that left me wanting. 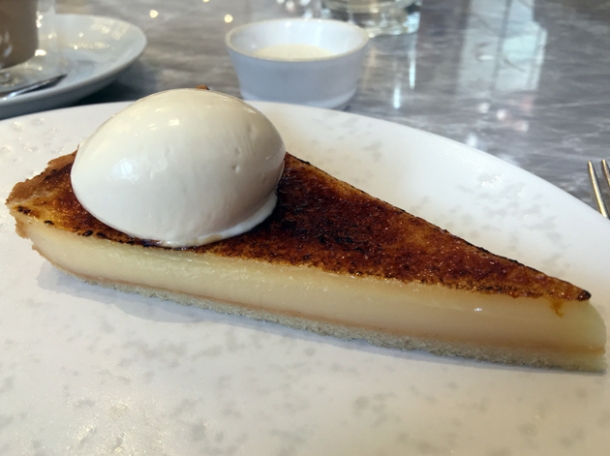 This tart was too tart – and I like tart tarts.

The flat white was a tad watery and lacking in character, but it did have a thin silky head and packed a caffeinated wallop that kept me going through the afternoon and into the evening.

Do they have coffee in Westeros?

The tuna tataki managed to retain the meaty tang of that fish despite being a little too chilled. Assorted vegetables added a sweet herby tang, while the avocado puree was surprisingly complimentary to both the tuna and the mirin-infused broth. As an umami fish dish, this tuna tataki starter was imperfect but still more punchy than the barramundi main.

To the person at the other table who asked, no this is not gammon.

A slab of pork belly was suitably meaty, but its lack of character wasn’t helped by the hard and unrendered streak of fat. With the belly flopping, it was left to the tart fennel kimchi, lightly spiced with ginger, to restore some honour to this dish. The meaty broth took on the flavours of the kimchi quickly, ensuring this dish wasn’t a complete loss.

This isn’t gammon either.

Rubbing chicken salt into my wounds.

Smooth and sweet burnt marshmallow was almost like ice cream in its softness. The chocolate fondant matched the marshmallow in smoothness and gooeyness, but it tasted of little. Powerfully nutty and salty peanut bound these two blobs of softness together. It was almost too bold, but the underwhelming flavour profile of the fondant and marshmallow meant thats its presence, in the end, was a welcome one and made this dessert a moderate success rather than a middling failure.

Why can’t I have a dessert in the shape of a free-standing Stay Puft Marshmallow Man?

Dickie Fitz’s flat whites may not be the best of its kind, but this brew was consistent in staying much the same as it was before.

The lobster short soup may be oddly named, but it was also far better than I expected following the disappointing cauliflower gyoza. The highly umami soup was thin with a soy sauce-like colour to it, but had an intense bisque-like taste to it. This was just as well as the chunky lobster meat filling of the gyoza-like dumplings tasted more of ginger than lobster itself. Aromatic herbs scattered on top added another layer of flavour. The balance between soup and dumpling was tilted too much in favour of the former, but this dish did ultimately deliver its promised seaside flavour.

Less a soup, almost a sauce.

Lamb chops were moist and gently earthy with a lightly crisp crust. The minty sauce on the side wasn’t really necessary, as it could overwhelm the natural meaty funk of the chops. It can’t hope to match the meaty delights of the lamb sometimes available at The Newman Arms or Pitt Cue, but it’s nonetheless a respectable rendition. 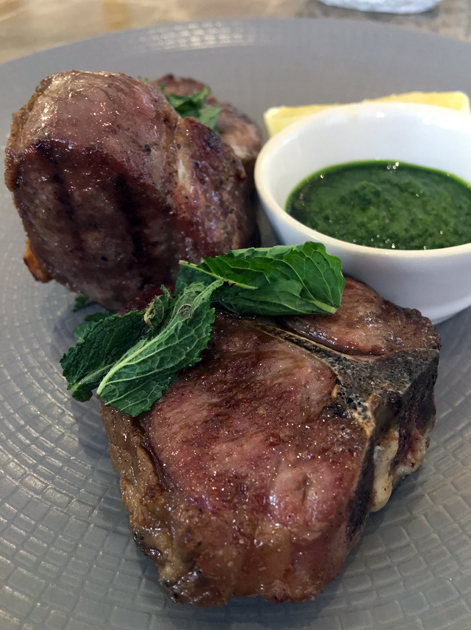 The kitchen clearly likes playing around with umami as a bowlful of cabbage was carpet bombed with parmesan, delivering a knock out punch of umami. If the lamb chops were a subtle and understated costume drama, then this side was a summer blockbuster. 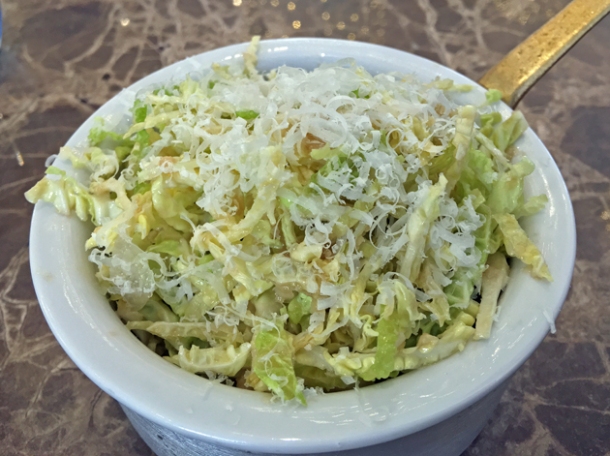 Dickie Fitz’s dessert and pastry chef clearly knows how to make a good sorbet. The coconut variety was smooth, unmistakably flavoured and delivered a clean after taste which made it a good accompaniment for the banana bread sticky toffee pudding. Although not the bold combination of fruity, tangy viscosity and hearty stodge that I was expecting, it was still gently sweet and tinged with ginger. 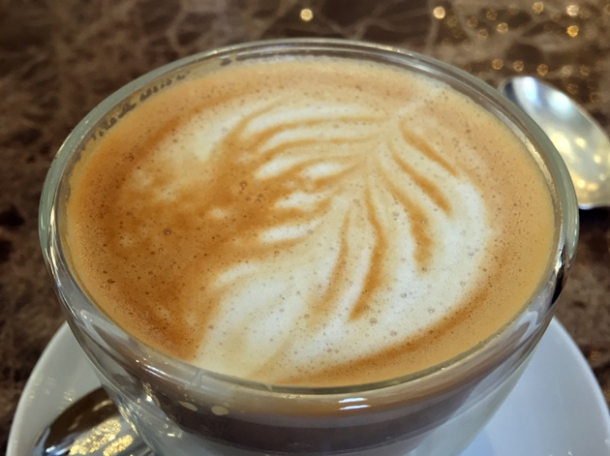 Turning over a new leaf.

The good news is that the pork itself was moist and milky with a modest gaminess that would’ve fooled me into thinking that it was a meat other than pork if I didn’t know better. It was also lean. The bad news is that the skin was disappointingly soft and floppy. It bore no resemblance whatsoever to the crisp crackling you’d get from, for example, Le Bab’s pig head or from a classic Segovian-style roast suckling pig. It was a crushing disappointment as good crackling can elevate a merely satisfactory roast suckling pig into an excellent one. 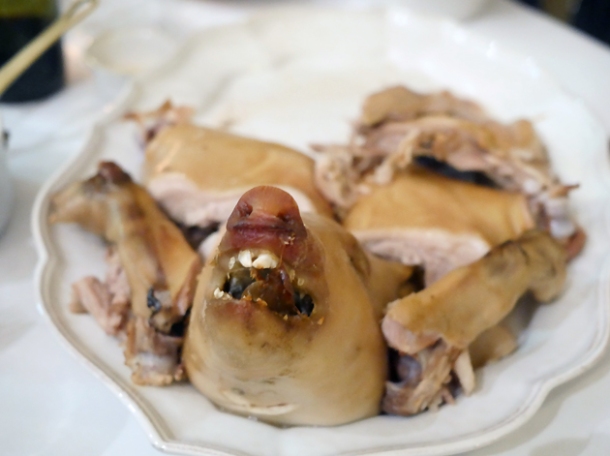 Porcine photos for your pleasure.

You’ll be impressed by this only if you’ve never had roast suckling pig before.

Starters included arancini/suppli-esque mac and cheese balls. I found myself unenthused by the mediocre pasta and substandard cheese, but at least the deep-fried morsels were crisp and free from excess oil. 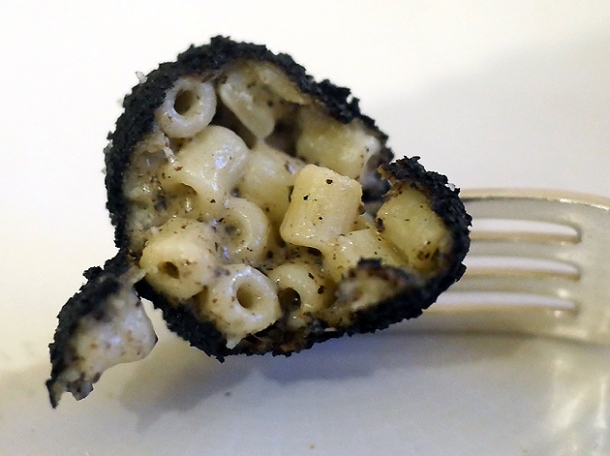 The green beans with almonds and a modestly piquant sauce was unchanged from the first time I had it, while crisp and cool crudites were served with a dip that resembled an inoffensive creme fraiche trying to do an impression of tzatziki. Gyoza actually looked like gyoza this time with suitably crimped skins of modest thickness, although the tame lobster and prawn filling wouldn’t pass muster in most Japanese restaurants or most dim sum restaurants for that matter.

Sides of a modestly creamy and fluffy mash, lightly buttered and salted greens and a green salad were nothing to write home about.

Mash at a mash-up restaurant.

This review’s procrastination was brought to you, in part, by the consumption of far too much ice cream.

Dessert, such as it was, came once again in the form of lamingtons. Although no better than before, at least they were no worse. 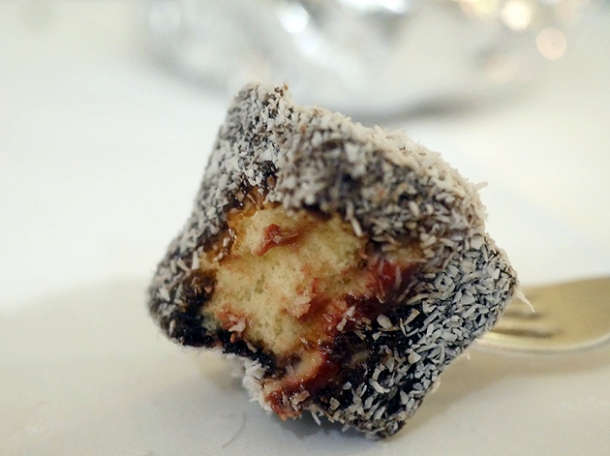 Dickie Fitz is far from bad, due in large part to its attractive decor and generally friendly, efficient service. But it’s an unworthy successor to Newman Street Tavern with a ridiculous gendered conceit and an uneven menu that’s only intermittently satisfying and never really good enough to match, never mind exceed, The Providores and Tapa Room – the benchmark for this genre. It’s not Australian, but if you’re hungry in Fitzrovia then you’re much better off at the French-esque Piquet.

Reservations: highly recommended the closer you get to the weekend

Average cost for one person including soft drinks and service charge: £45-50 approx.