The sweet life. Keep it sweet. A sweet deal. Sweet as honey. Sweet as pie. Our understandable preoccupation with sweetness and sweet foods is so deeply ingrained that the word itself has become a synonym for all that is desirable and good in the English language. But this has also blinded us, in much of the Anglophone world at least, to the lip-pursing charms of sharp, bitter, tangy and sour flavours. The charms of those grown-up flavours hasn’t been lost on the kitchen at Little Duck The Picklery though, the third restaurant from the people behind Duck Soup and Rawduck.

Even if its ever-changing menu didn’t have this emphasis on fermented and pickled ingredients, Little Duck The Picklery would still have an identity distinct from its older siblings thanks to it interior, brimming with charm and warmth. From the cosy window-side booths to the counter seating around a produce-laden slab that’s part prep space and part semi-communal table, it almost feels like the homely venue of a supper club rather than a restaurant mere minutes away from Dalston’s main thoroughfare.

A drink of kombucha or drinking vinegar sounds like just the sort of beverage that a stereotypical Dalstonite would favour. Despite tasting much like a chilled and somewhat watered down chip dressing, the drinking vinegar didn’t taste as ridiculous as it sounds. Light yet tangy and thirst quenching, it’s almost like a funky, gnarly apple juice. It’s very much an acquired taste and I liked it. 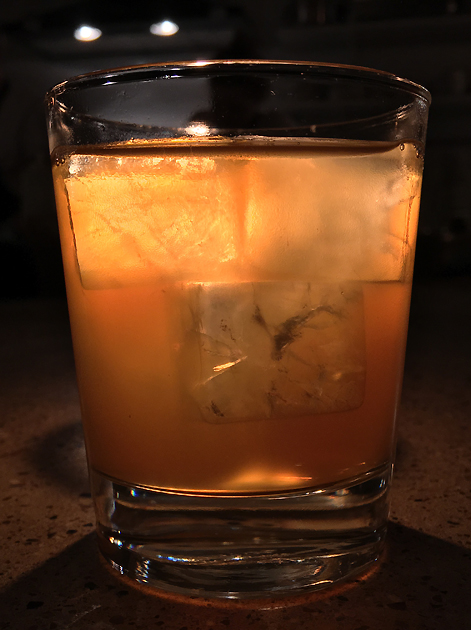 A choice of pickles are available, changing almost daily. The thick, dense, smooth and slippery slices of ‘meat’ radish had a light tanginess with sweet and woody tinges to it. It’s well worth having. 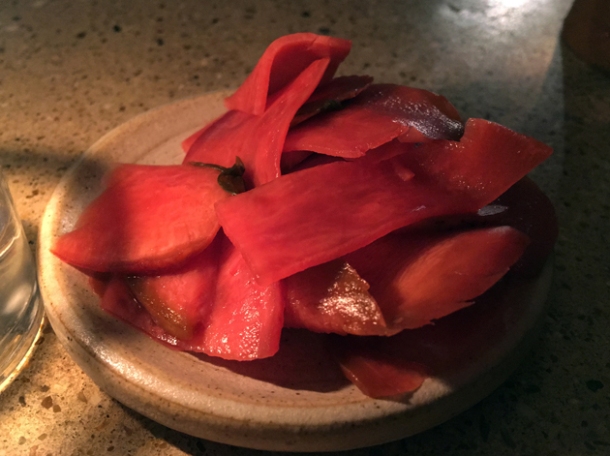 Gently tenderised chunks of potato and sheafs of artichoke came dressed with a generous fistful of dill and a lightly peppery olive oil. All this meshed surprisingly well with the salty, milky moistness of the light feta-esque brined cheese. Few dishes anywhere are as soul-soothingly satisfying as this. 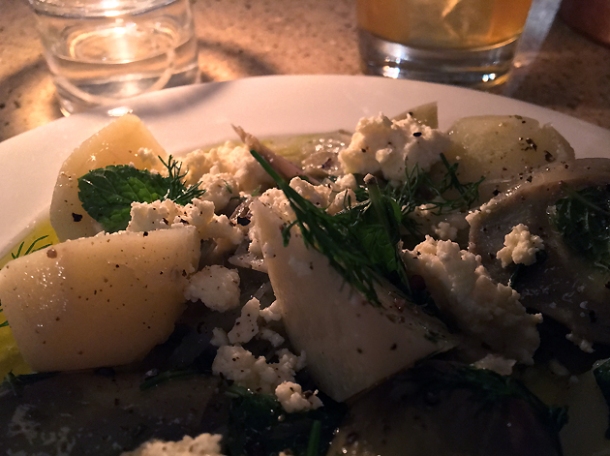 All kinds of salty cheese have passed through my lips.

Tripe with pancetta and chickpeas seems like the very antithesis of the more wellness-friendly (*shudder*) artichokes and cheese, but both feel perfectly at home in The Little Duck Picklery’s Mediterraneanish oeuvre. Pork and chickpeas is a tried-and-true pairing, but it was done especially well here. The pancetta weren’t shy and polite cubes of dainty meat, but unapologetically fatty chunks of quivering saltiness. The pork’s salty unctuousness made it feel like a natural partner for the nutty, creamy, graininess of the chickpeas.

The tripe had been sliced too thinly to appreciate its wrinkly texture – easily the best thing about tripe – but the sticky, profoundly slurpable sauce more than made up for this, binding everything together. If the artichokes and cheese was the equivalent of a soft peck on the cheek and gently ruffled hair, then this was a full-throated snog with tongues probing every which way. Or that might just be me. 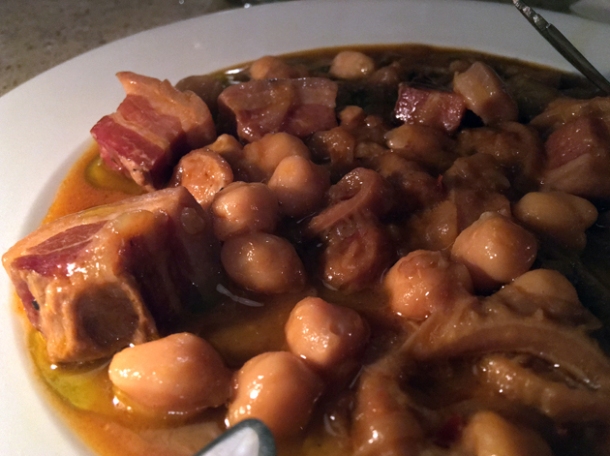 Has someone alerted the Tripe Marketing Board?

Each one of my doorstop slices of brawn had its rich, dense meatiness interspersed with chunks of sumptuous fat and pistachio. Although the latter had little effect, the fattiness was not only sumptuously enjoyable in its own right but neatly counterbalanced by a profoundly fruity zestiness. It was also as if the brawn had placed under a grater and juicer while a plump orange was zested, peeled and smashed, the porky treat wallowing in squirts of mandarin-like juice and peel. If there’s a finer brawn or terrine in this city, then I’ve yet to eat it. 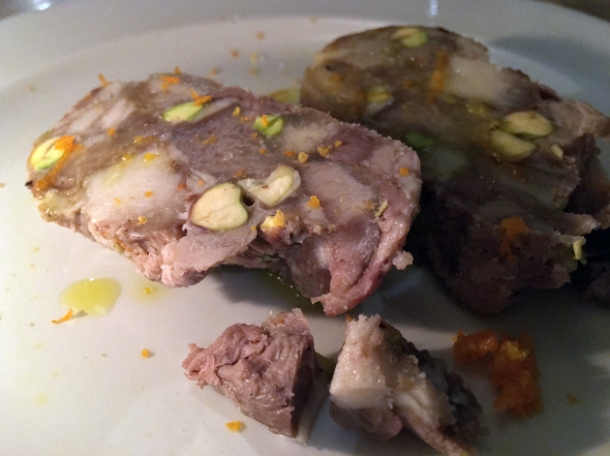 A slice of almond tart saw dense, buttery and tightly crumbed pastry filled with a moist and nutty filling. A seam of what I’m pretty sure was quince added a sharp, tangy sweetness that was neatly counterbalanced by the light sourness of dense clotted cream served on the side. Elegantly delicious. 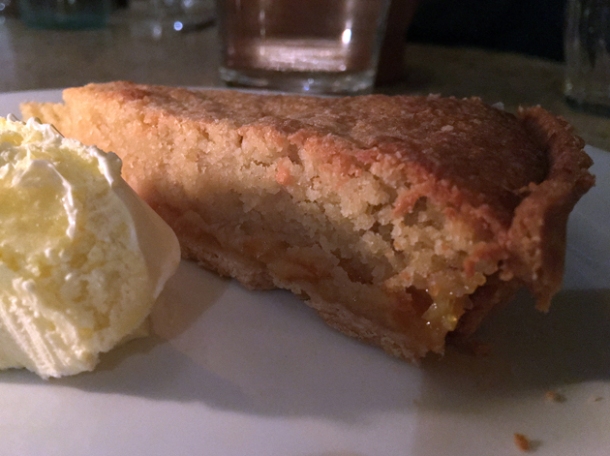 The drinking vinegar was much the same as it was before. Divisive yet drinkable and memorable. 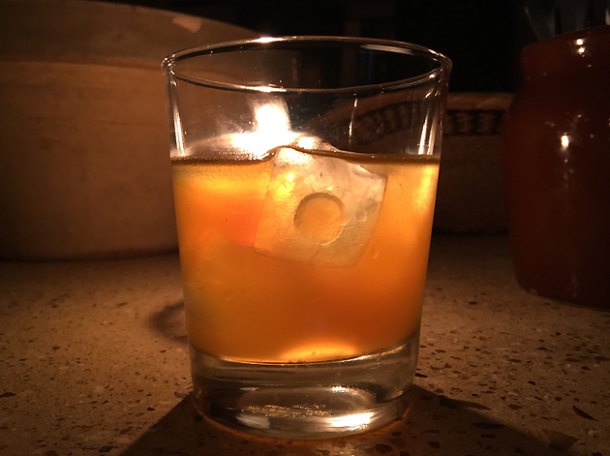 Wee radishes had a yieldingly firm bite with an initial earthiness and gentle sweetness that gave way to a delicate sharpness. Accompanying slices of far funkier beetroot were an apt partner. 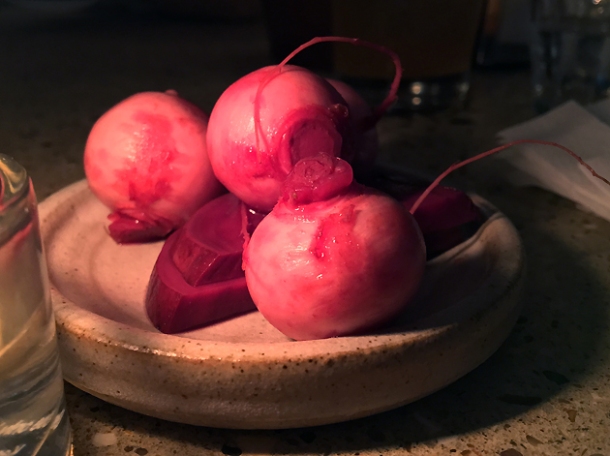 A selection of sharp and bitter leaves, including radicchio, came dressed in a sweet and distinctly walnut flavoured vinaigrette dotted with extant bits of nut. If more salads were this boldly flavoured and well-balanced, then perhaps there’d be fewer salad-dodgers. 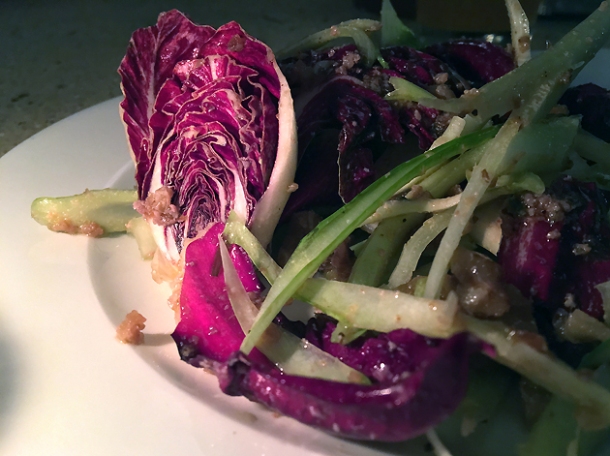 What’s that? You want to eat at the local branch of Tortilla around the corner? Don’t be radicchio.

Salted cod sounds hearty and stodgy, but the reality was a far lighter and more nuanced dish. Meaty, gently chewy strips of cured fish were served as a crudo, doused in a mildly sweet olive oil. It was neither the oil or the tame chilli flakes that packed a wallop though, but the distinct fruity sweetness of mandarin. This crudo proved to be both a tongue pleaser and an adept palate cleanser. 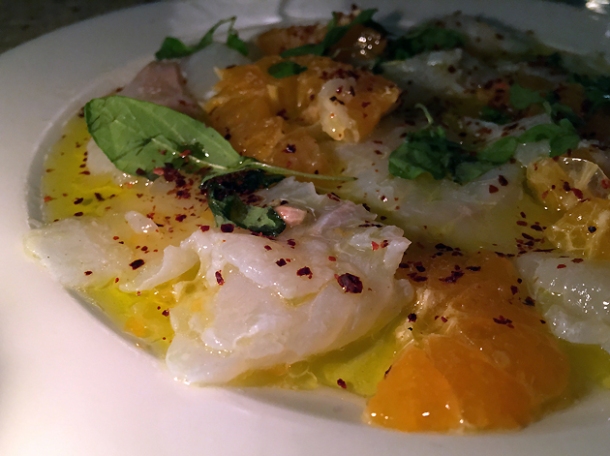 I almost called this dish a ‘ceviche’, but then I slapped myself straight.

Yieldingly tender medallions of lamb cooked rare weren’t just gently earthy, but had a meaty tang too. I’d be very surprised indeed if this meat hadn’t come from an animal that had not only lived well, but had been slaughtered and butchered in the very recent past. The lamb wasn’t the only expertly-cooked thing on this plate – pickled onions had been charred, not only to emphasise their distinct sharpness but their musky sweetness too. Thick, moreishly creamy and refreshing labneh-like yoghurt sliced through the the richness of the lamb and onions effortlessly. Few dishes can make me sigh with contentment as much as this one. 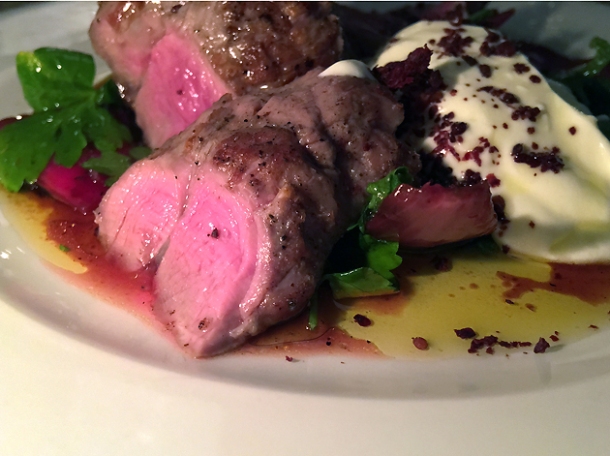 Sorry Mangal 2, but this may just be the best lamb dish in Dalston.

Slices of cuttlefish, cooked just-so to provide a firm bite and a tender follow-through, were joined by the occasional springy tentacle and slices of sporadically sharp, umami tomatoes. Both the tomatoes and the chilli flakes were quite tame, but the pleasingly tangy, sharp and umami capers were more than capable of picking up the slack. Although disappointingly unbalanced, this cuttlefish dish still had much to offer. 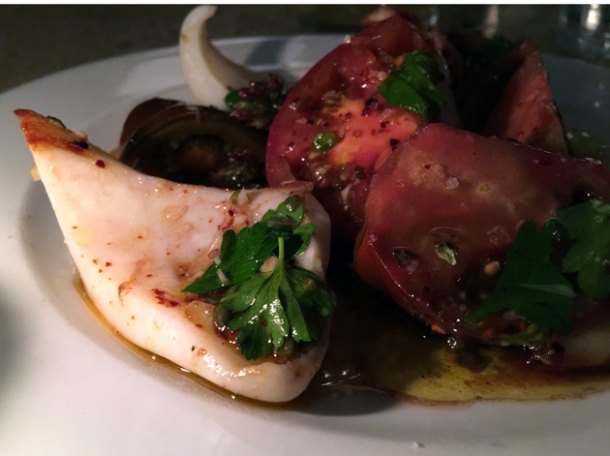 The pastry in the prune and ricotta tart was surprisingly functional compared to the far more accomplished and refined effort used in the almond and quince tart. The syrupy sweetness of prunes occasionally punctuated the ricotta filling which managed to be thick, creamy and milky, yet light and lifting too. A bolder and/or more frequent prune presence would’ve better justified a repeat appearance of the delightful clotted cream. Another unbalanced dish then, but this dessert, like the cuttlefish, was hardly a dud. 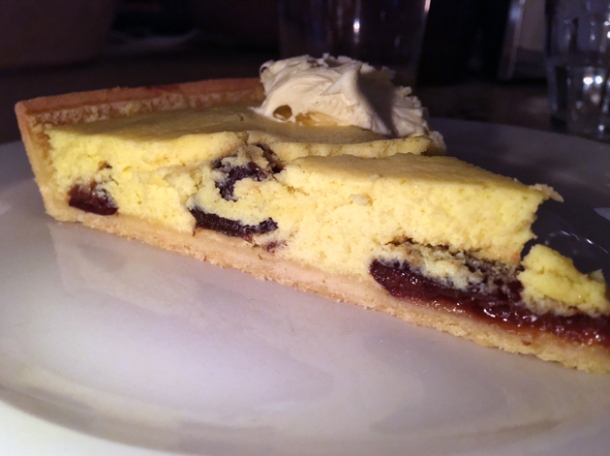 Apologies for the iffy photo, folks.

Despite looking like a glass of weaponised Vimto, this purple drinking vinegar was actually made from beetroot. Unlike the others that I’ve tried though, this one was almost undrinkable. Its earthy pungency was overpowering with a persistently unpleasant, malingering after taste that clung to the back of my throat and wouldn’t let go. 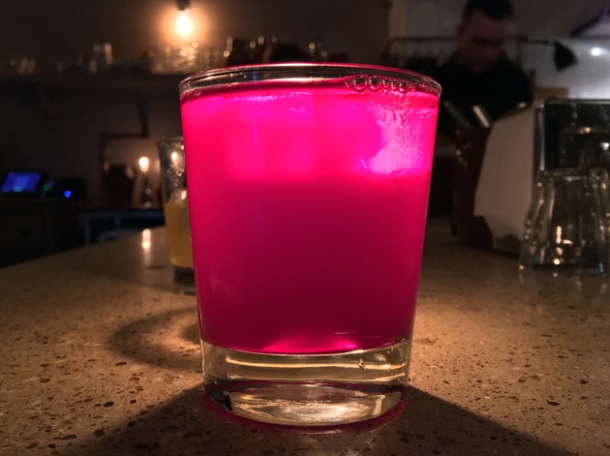 The donkey punch of drinking vinegars.

Another drinking vinegar was more akin to the more sedate efforts from previous meals, while a third resembled a funky pear juice. Both were far more preferable alternatives to the beetroot. 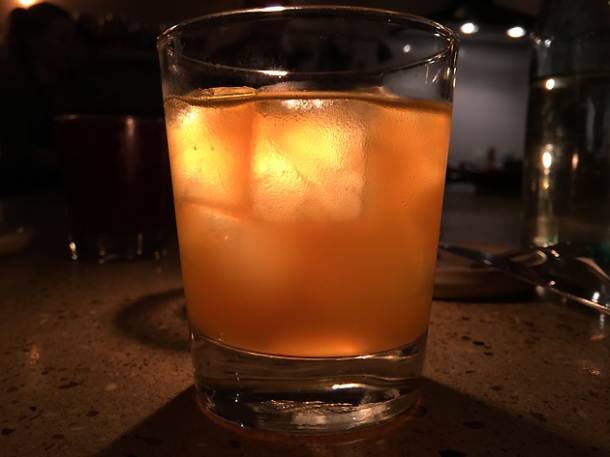 The non-alcoholic drinks at Little Duck The Picklery are definitely not boring. 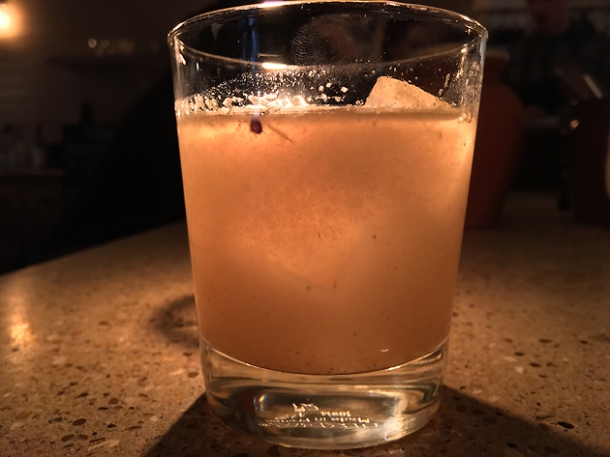 Few dare utter the name of the sacred Klingon ceremony known only as ‘kombucha’.

Yieldingly tender chunks of pickled daikon had a tart heat and crispness akin to the gari or pickled ginger that often comes with sushi. It was a pleasing tongue tingler as was the kimchi. This kimchi was very much the kitchen’s own take on this Korean classic though, with a taste more akin to mustard greens and peppery celery than the sour and hot versions you’d find in most of London’s Korean restaurants. 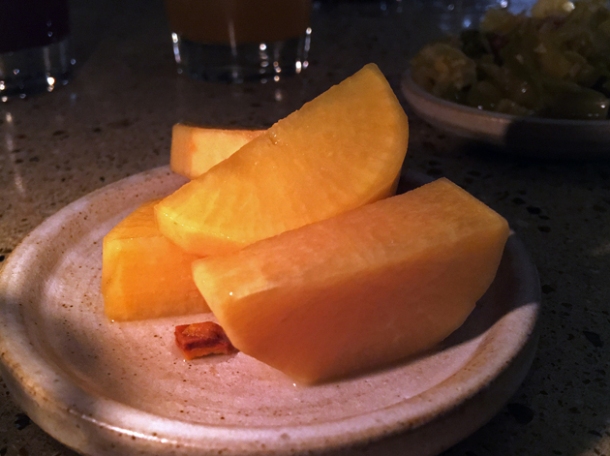 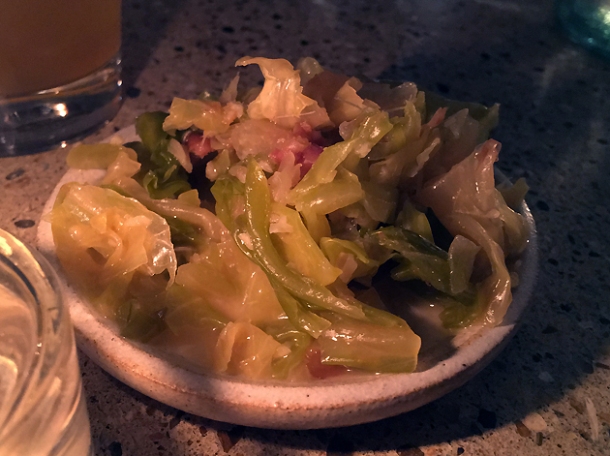 Not your Korean expat’s kimchi.

Sweet and gently tenderised cubes of baked squash may have been the headline ingredient in this dish, but the other elements were just as notable if not more so. The chewy sourdough pieces had been soaked through with a herby, umami dressing. The whole lot was topped with shavings of parmesan – the proper stuff too, not knock-off sawdust – resplendent with a deep woody umami that bound everything together and elevated it to new heights. 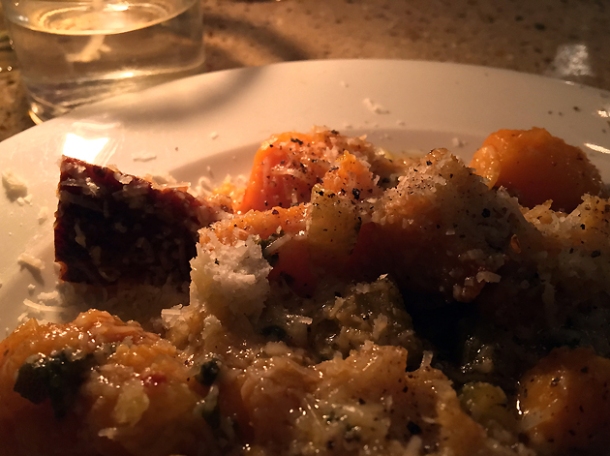 Overheard – ‘Can I order it without parmesan?’
Only if you have a legitimate medical reason or if you’re a moron.

It’s worth taking your chances with a slice of Little Duck The Picklery’s ever-changing seasonal pie. On this occasion, the thin yet dense and buttery shortcrust pastry came filled with gamey pheasant. It was joined by charred, almost jerk-like bacon and sweet celeriac. Everything was bound together by a sticky umami gravy, the whole lot spilling seductively out of the pie crust like your lover’s bits popping out in the back of a minicab. 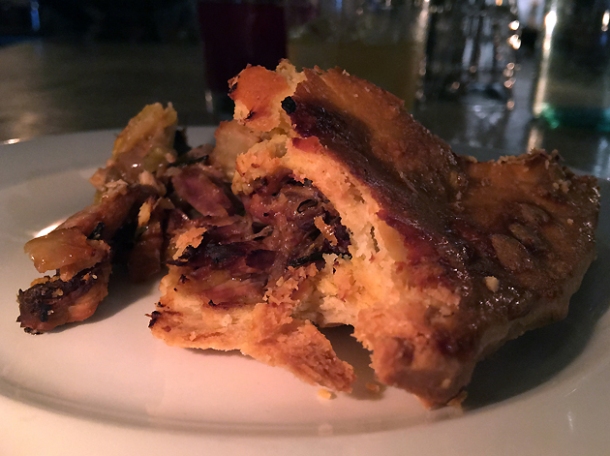 What a very pheasant experience.

Generous helpings of duck ragu and shaved parmesan clung tightly to thick and wide ribbons of just-cooked pappardelle. This was no finely-minced ragu though, but a sticky, lightly bitter balm dotted with small-to-medium sized chunks of meaty, sinewy duck. Its earthiness was neatly matched by the deep umami of the parmesan. If there was ever the culinary equivalent of a warm, snuggly duvet then this is it. 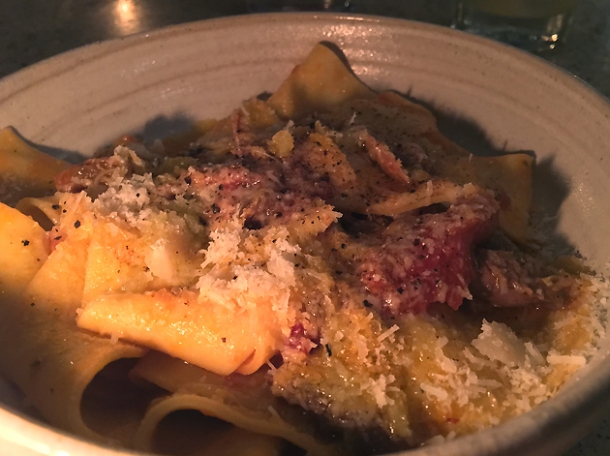 Buckwheat custard served at room temperature sounds vaguely Japanese-y, but the actual pudding felt quite British with a remarkably vanilla-like sweetness and aroma to it. Thin yet still creamy, it contrasted reasonably well with the tart sweetness of the quince slices. The fibrousness of the quince was somewhat offputting in its excessive chewiness though, possibly explaining why it’s so often poached or reduced to a pulp elsewhere. Still, this was a pleasing pudding overall and still infinitely preferable to some unimaginative molten chocolate confection. 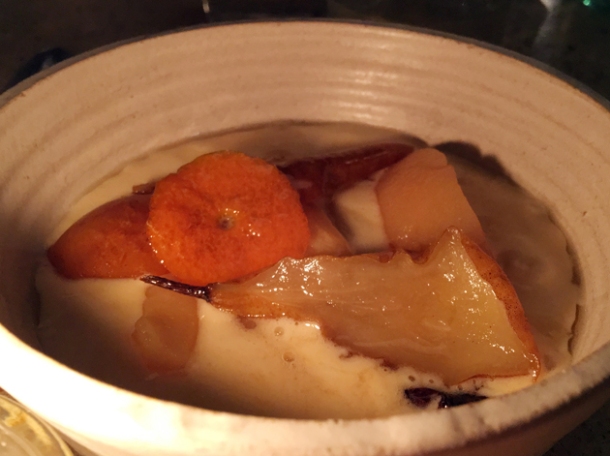 Despite some initial fears of gimmickry or a Garlic and Shots-style sensory overload, eating at Little Duck The Picklery turned out to be a thoroughly joyful affair. Pickling and fermenting are, of course, the food preservation methods of choice for enduring long, hard and unfruitful winters. And yet, here, they impart a grace and lightness to dishes that evoke the warmth of summer. The almost uninterrupted series of simple yet sophisticated dishes, sometimes based around pickled or fermented ingredients, were executed with quiet aplomb and deft skill. While the pickled and fermented elements never quite reached the same level as, say, Japan’s superlative oeuvre of pickles, they’re still far more accomplished than the conceptually similar yet far rougher fare at Rök. Given the track record of its sister restaurants, Duck Soup and Rawduck, I shouldn’t ever have doubted the kitchen at Little Duck The Picklery. And neither should you.

Average cost for one person including soft drinks and service charge: £35-45 approx. (£60 if you push the boat out)