You couldn’t pay me to eat here again.

People like to sneer at hipsterish restaurants and bars in Shoreditch and Dalston. They’re seen by many as faddy, shallow trend-chasing establishment serving up fare that’s incomprehensible and inedible to ‘normal’ folk. I have little time for such half-baked nonsense, preferring to judge each establishment on its merits.

Tacos del 74 is a case in point. Located on Dalston’s main drag with another branch in Clapton, this glorified bar is superficially attractive with a neon-lit bar area, cheapish drinks and the almost complete lack of any credible alternative Mexican eateries near-by. The service on my first visit left much to be desired. The friendly but overworked waitress took five minutes to seat me and 15 minutes to bring over a menu, while the rest of the curt and monosyllabic staff were studiously engaged in busy work or welcoming their mates. My table, covered in detritus from the last occupant, went uncleaned.

Then there’s the gutter trash food.

Although thick and chunky, the guacamole tasted mostly of lemon juice and umami tomatoes, rather than of actual avocados. The overindulgent portion of somewhat stodgy tortilla chips didn’t impress either, but this guacamole turned out to be one of the least offensive dishes of this entire first meal.

The slapdash fried tortilla used as the base of the brisket tostada displayed the same stodgy, overly crunchy problems as the tortilla chips accompanying the guacamole. This was nothing compared to the ‘brisket’ topping though, which consisted of heavily slated refried beans with vanishingly little beef. Not even the morass of cheap lettuce and sour cream was enough to counterbalance the face-shrinking saltiness of the so-called brisket. 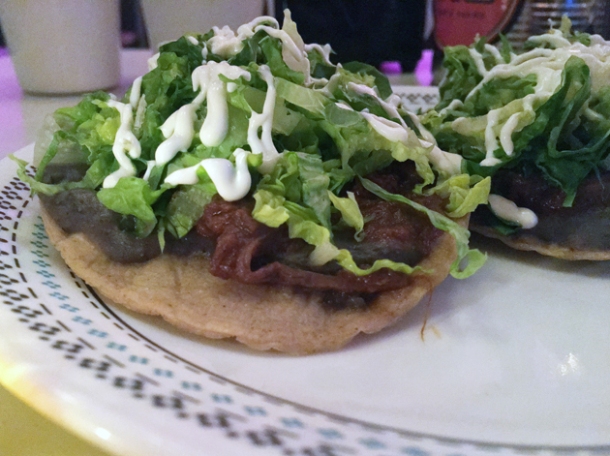 The oily, flabby and lifeless quesadilla looked more like a congealed omelette than a stuffed tortilla. The mystery cheese inside was devoid of charm and character – I’ve had supermarket pizzas with more edible cheese. 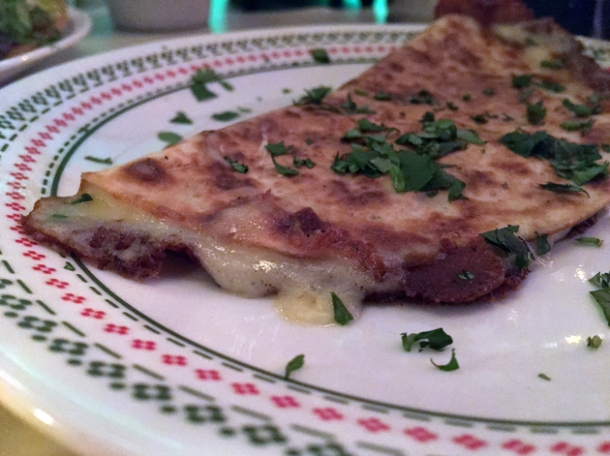 What am I doing with my life.

The tortillas used in all the tacos this time around were oddly bland and unmemorable, but this was preferable to the dumpster fire effort used in the plain quesadilla above.

Bitty, lifeless bits of battered fish resembled the scraps from a McDonald’s fillet-o-fish, a resemblance only strengthened by the tartar-like sauce. The sharp vegetable garnish was the only redeeming feature here.

A similar pattern emerged in the other tacos. Drab scabs of chicken were livened up by tart pickles and a sharp and sweet sauce. The only vegetarian option saw oddly crispy bits of nearly unidentifiable cauliflower joined by sharp radishes and a tart, peppy sauce. 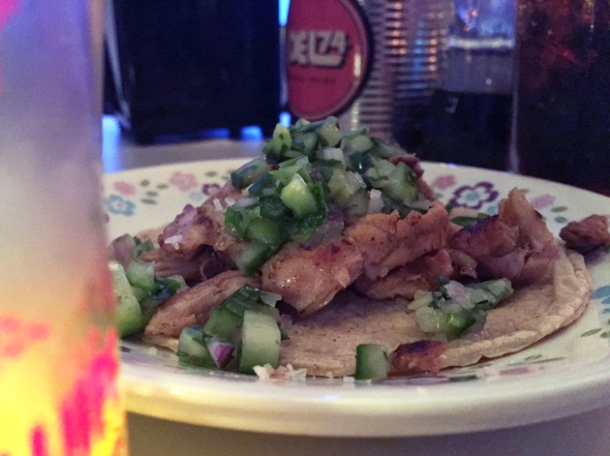 Until I came here, I had always argued that Dalston and Shoreditch were actually some of the friendliest places you’d find in London. Especially when compared to Soho, Mayfair and Clapham.

This review’s procrastination was brought to you, in part, by Big L.

Given the disastrous nature of my first meal at Tacos Del 74, I returned only reluctantly. The service this around was, on the whole, a lot more friendly and attentive – although that’s not as significant a accomplishment as it should’ve been given that the place was only 1/4 full this time, at best, rather than stuffed to the rafters.

The tortillas used in the tacos this time around were of better quality. Their nuttiness seemed oddly artificial though and they were far too fragile, breaking apart easily. The tacos’ hot sauces served on the side, curiously absent from my first meal, did pack a tingly punch albeit a one-dimensional one.

The cochinita pibil tacos were a stunning accomplishment in blandness with even the pickled onions tasting of abject nothingness. 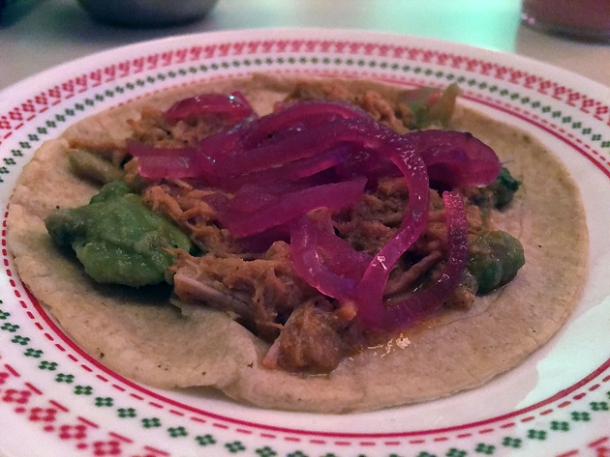 Scraping the bottom of the pork barrel.

‘Steak’ tacos barely deserved the name. An overdose of pepper couldn’t disguise the cheapness of the beef – each bitty scab of grey representing regret and wasted opportunity. The gently sweated onions provided some respite with their modest tartness. 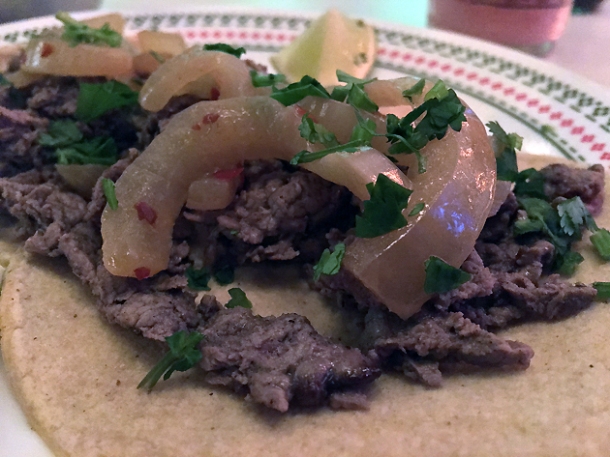 Flecks of over-salted chicken were not only a waste of my time and calories, but of an animal’s life. Even the cucumber and onion slices were drab and lifeless.

Pork ribeye, presumably taken from a pig’s loin, shows up in Tacos del 74’s most expensive taco. Although the chunks of pork were big enough to appreciate their tenderness, this was only partial compensation for their offensively dull taste. The garnish of modestly umami tomatoes and somewhat sharp onions was too little, too late. 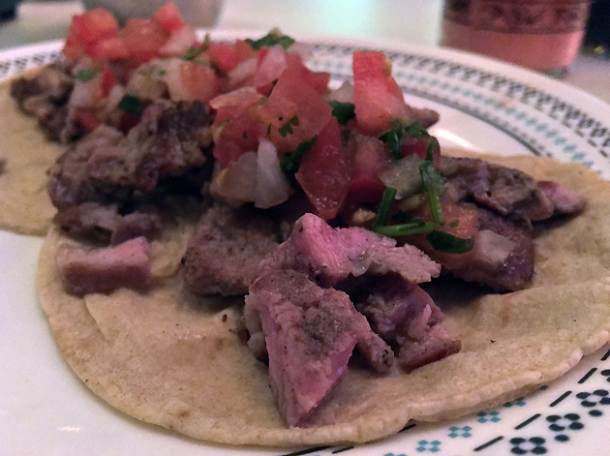 Sand in my ribeye.

As with the tacos, the tortilla in the steak quesadilla was less offensive this time around. Reasonably soft and supple, it came filled with the same derisory scabs of ‘steak’ that appeared in the steak tacos. The gooey cheese was by far the most edible and successful element here, even though it failed to reach the same heady heights as the distinctive Oaxacan-style cheese used in Santo Remedio‘s quesadillas. 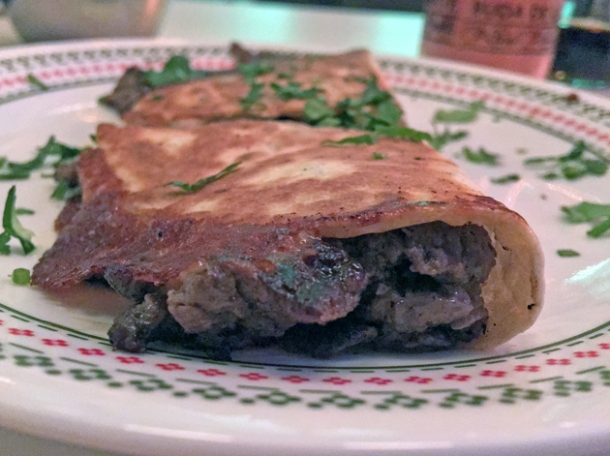 Tacos Del 74 is deeply special, but for all the wrong reasons. It’s so rare to encounter such wretchedly deplorable food in a restaurant, Mexican or otherwise, that its continued existence is almost inexplicable. Its sorry presence in our reality isn’t due to a Lovecraftian distortion in our space-time continuum though. I suspect its existence is due to something much more mundane – despite its name, Tacos del 74 is more of a bar than a restaurant. The majority of the other patrons, on both my visits, were drinking rather than eating. For once, the crowd had the right idea.

Drink here if you must. But don’t let your drunkenness lure you into eating Tacos Del 74’s atrociously rank food.

Reservations: only taken for groups of five or more

Average cost for one person including soft drinks: £35 approx.