I’m deeply sceptical about the entire idea of brunch. It’s the original naff restaurant marketing gimmick – add some muesli and eggs to get a whole new meal! Charge extra for some mediocre coffee! While Rawduck didn’t change my mind about this bastard relative of the elevenses, I’m still mightily impressed with this restaurant for other reasons.

Rawduck is the East End spin-off of Duck Soup, one of my favourite Soho restaurants of 2011. Although 8 Hoxton Square, another Soho to east London transplant, failed to impress me, Rawduck fared far better by starting off with the template of its parent and then striking out into new areas on its own terms. While Duck Soup’s menu has a vaguely Italian feel to it, Rawduck defies categorisation. Besides differing weekday, Saturday and Sunday brunch menus, the dinnertime menu takes inspiration from the Middle East, Japan and Italy yet surprisingly doesn’t fall apart under the weight of its own ambition. 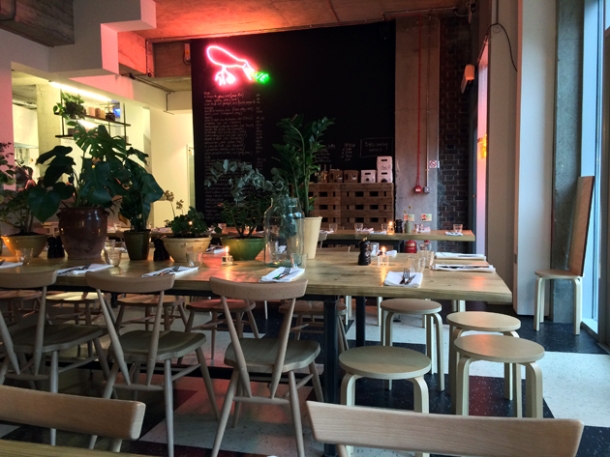 Eating with Bleeding Gums Murphy is always a child-like experience as he is overly impressed with even the slightest act of kindness by the front of house staff, no matter where we eat. Even he was unimpressed with Rawduck’s service though. Although smoulderingly sultry, the servers took what seemed like hours to get anything done from bringing us our menus to settling the bill. The efficiency of the service did gradually increase over the course of my visits, but it was a painful process to endure.

We started off sharing the sage and anchovy broken eggs. The fried eggs were suitably rich and runny, although I could’ve done with a little more of both the sage and the evocatively salty anchovies.

Bleeding Gums Murphy and I also shared a whole bream baked with salt and fennel and then served with aioli on the side. The limp aioli didn’t really add much, but its presence was hardly missed. The flaky, delicate yet meaty flesh is easily good enough on its own yet was made all the more delectable by the dusting of large, crunchy salt crystals. Throw in a crisp, refreshing, spicy salad of mint, chilli and celery and you have a cracking pescatarian Sunday roast.

Salt of the earth.

Just a short walk from Banh Mi Hoi An.

For dessert, Bleeding Gums went for the saffron buttermilk pudding with toasted almonds and pistachios. The texture was somewhere in between a posset and a rice pudding. It didn’t taste much of either saffron or buttermilk, but the crunchy nutty crust make up for this to an extent.

The lychees in jasmine tea was simpler and worked better. The firm fruits were served in a mild tasting but evocatively scented jasmine tea that instantly reminded me of the tea houses of Taiwan. 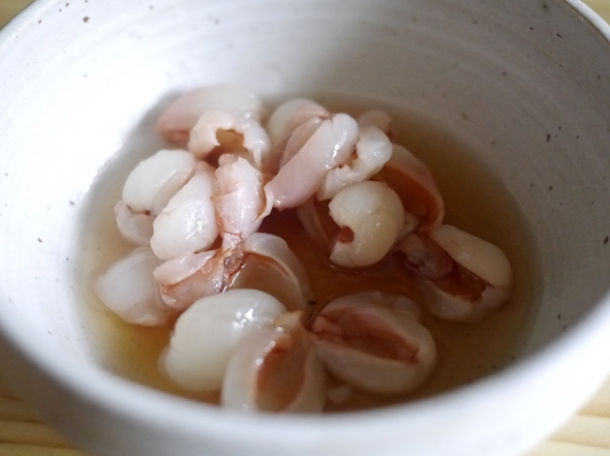 I’m always complaining that most restaurants and bars serve ho-hum soft drinks, but that doesn’t apply here. The rhubarb soda was sweet, creamy and mildly tart with slices of actual rhubarb bobbing in the drink.

I repeated my eggs and fish brunch pattern for a second time, this time without a dining companion. Firm broad beans provided a nice contrast in texture to the fluffiness and runniness of broken eggs, but while the morcilla was suitably soft, salty and fatty in its own right, an even more decadent English black pudding would’ve added that extra level of richness that would’ve made this dish really sing.

How many frying pans have they got in that kitchen?

I had few complaints about the hot smoked trout. The glossy thin slices and flakes of mildly smoky fish unsurprisingly tasted a lot like salmon. The accompaniment of coconut yoghurt didn’t taste especially tropical, but did provide a refreshing counterpoint to the relative richness of the fish and the texture of the freekeh. This processed wheat cereal from the Arabic world was similar in taste and texture to rolled oats, but wasn’t too heavy or hearty and was surprisingly complimentary to the trout. All in all, a light yet satisfying dish.

If there’s one soft drink on Rawduck’s menu that’s undrinkable, it’s the apple vinegar and maple soda. It tasted almost entirely of sharp vinegar which is just as unpleasant as it sounds.

A far better whistle wetter is the iced cedron. This lightly sweet tea-like drink was smooth and sharply refreshing. I could drink it all day. 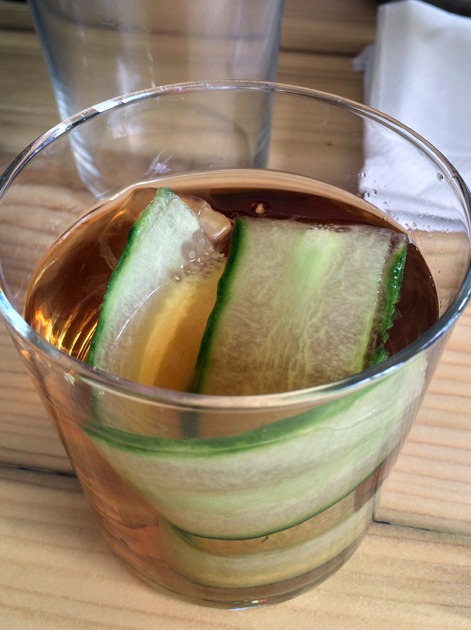 I want to make this at home.

I had no complaints about the hunk of carrot cake – nutty, moist, slightly sweet and topped with a smudge of creamy frosting. Classic.

Brunch at Rawduck is a perfectly amiable but things get really interesting at dinner time. For starters, Rawduck has a small but almost perfectly formed charcuterie selection that sets the standard for all charcuterie boards to come. Dry, waxy slices of cured Lonza Affumicata have subtle grassy, woody hints. The show is stolen by the Salsiccia Stagionata though – although hard looking, these slices of sausage are surprisingly yielding and have a sumptuous flavour that’s buttery at first, then peppery. Simply divine.

From Italy, with love. 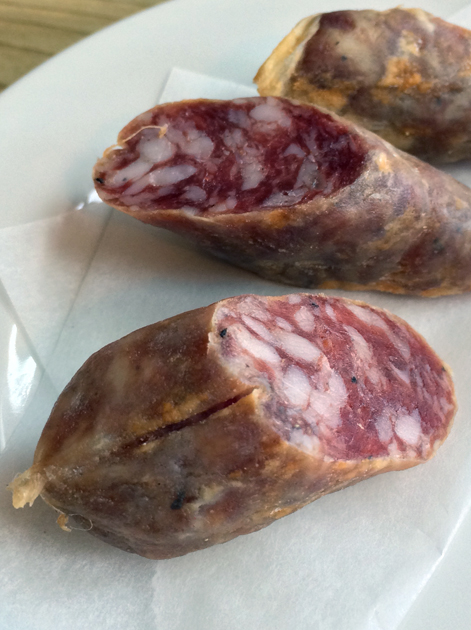 Oh my. Where have you been all my life?

Rawduck also has some fine pickled vegetables to go around. The kimchi was surprisingly good – tart, sharp and ginger-ish. It’s better than the kimchi I’ve had in some Korean restaurants. 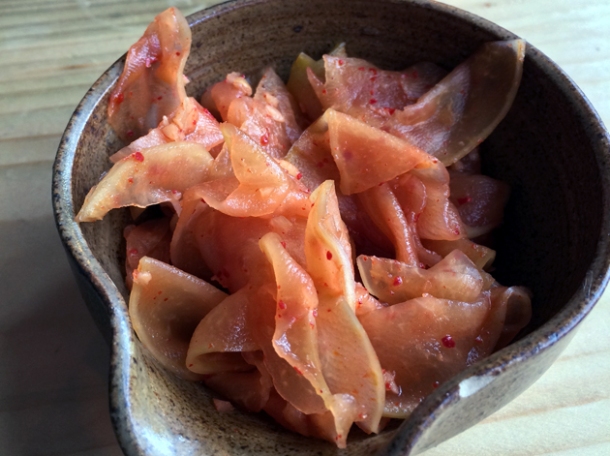 I need a wider jaw.

Anchovy and thyme pressed toasts with parmesan may sound like a gussied-up cheese on toast, but it’s posh cheese on toast that’s definitely worth having. Chewy toast topped with woody parmesan gives way to the salty tang of anchovy – it’s an odd sounding, but delicious combination.

A cheese toastie, but not as you know it.

Unsurprisingly, given the restaurant’s name, a dish of raw duck is available. The small, slightly chewy cubes of meat were reminiscent of venison tartare and mixed in with an unusual but highly effective combination of chilli and mandarin. The gently spicy heat and distinctive citrusy sweetness complimented each other very well, producing a sharp, tingly dish that I couldn’t shove down my gullet fast enough. I could’ve done without the useless rice cracker though.

Cold roast lamb sounds like a mistake, but the cool, generously thick slices make a dish that’s perfect for satiating your hunger in hot weather. It’s filling without being too hearty or stodgy – the earthy meat was so fresh that it practically bleated and its tenderness contrasted nicely with the mildly buttery, moderately firm broad means. A generous dusting of za’tar, an Arabic blend of spices, added an exceptionally lip smacking blend of nutty spiciness to the meat. Counterbalancing that was a hefty dollop of thick, smooth and creamy yoghurt. If there was ever a non-barbecue dish made for summer, then this would be it.

If that’s not summery enough for you, then the salad of firm and sweet cabbage leaves with crisp, sharp slices of watermelon radish and sprigs of dill should do the trick. The mass of vegetables was covered in a mildly creamy, herby dressing that wasn’t too overpowering or sickly.

Called a coleslaw on the menu, but it’s far better than any bog-standard coleslaw.

Affogato is a simple, almost boring dessert but the version here is one of the best and shows how it should be done. The distinctive taste of the smooth, thick, soft and not too icy cardamom ice cream neatly complimented the rounded bitterness of the espresso producing a cool treat. It strongly reminded me of Jordanian-style Turkish coffee – cardamom in coffee is almost ubiquitous over there – and it’s such an obvious combination that I’m surprised it hasn’t been done in an affogato before.

The only cured meat that I didn’t try from my previous dinner at Rawduck was the prosciutto. There were no surprises here – the thin slices of pig were mildly fatty with musky earthiness. 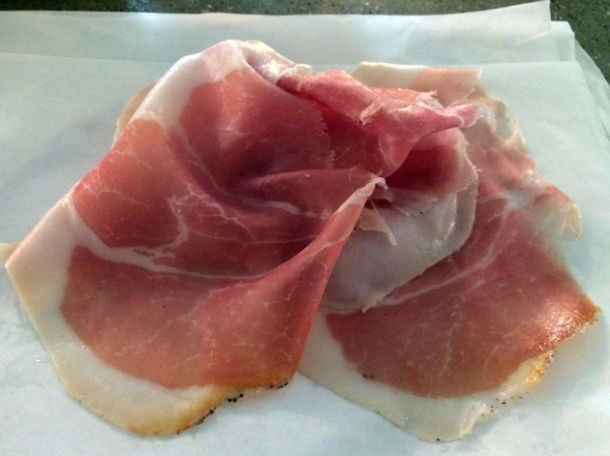 The cured meat for all ills.

Rawduck’s charcuterie may be second to none, but its selection of cheeses is merely competent. The Napoleon, a hard sheep’s cheese from France, had a mildly nutty and woody flavour – much like a tame, immature Comté only without that cheese’s depth of flavour. 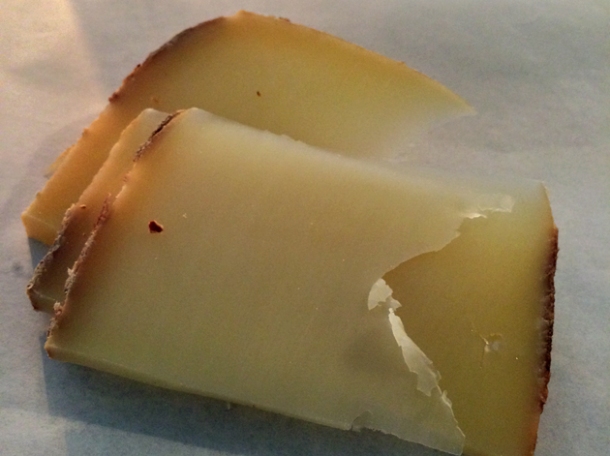 I don’t usually like goat’s cheeses, but the Rove des Garrigues served here is tolerable. Soft, elastic and slightly viscous, the usual goaty earthiness is here quite muted and not at all overpowering which probably won’t suit goat’s cheese fans but this made it much more edible for me.

The Tsukemono, or impatient pickles, are aptly named as they unsurprisingly arrive very quickly once ordered. The crisp, sour and briney cucumber slices are accompanied by a few shreds of seaweed for added saltiness. 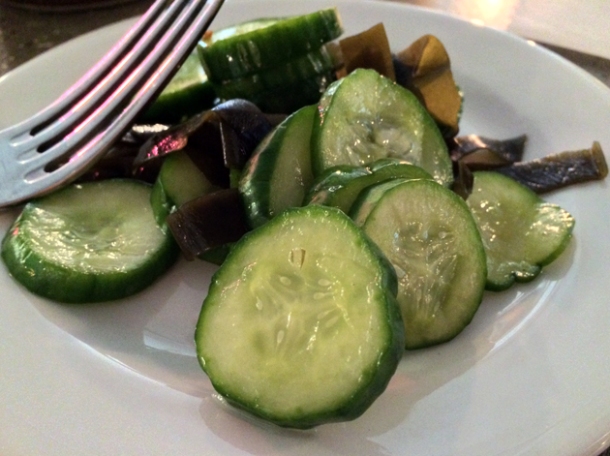 Why can’t all cucumbers taste this good?

Rawduck’s buttermilk fried chicken reminded me more of a chicken karaage. The whole chunks of grease-free chicken had a very thin coating, not really a batter, that had subtle ginger hints to it. It was the sauce that packed the real wallop though – punchy, sharp, acidic and spicy. Made from fermented soya, I initially mistook its kick for alcohol and it really made the fried chicken sing. It’s what Sriracha sauce wants to be when it grows up.

Duck Soup can rustle up a cracking duck dish and while the braised rabbit here didn’t reach quite the same heady heights, it was still good. The strips of meat were a little too tender for my liking, but it was still gamey and complimented nicely by buttery courgette pieces and tender morsels of rice-like pasta in a thin yet moreish broth. The broth was so good in fact, that I picked up the plate and slurped up every last drop. Homely and satisfying. 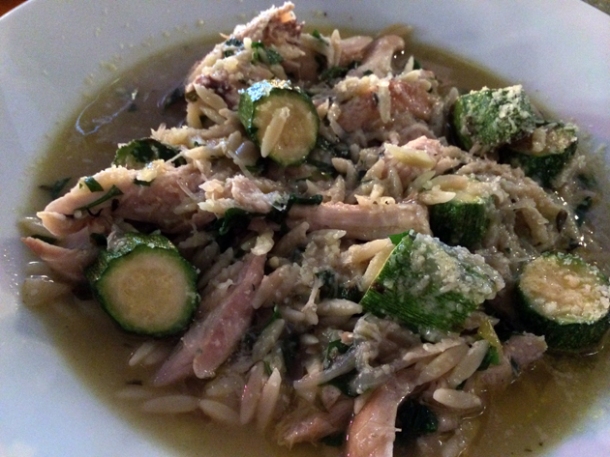 The lemon pie had a curiously thick and chewy crust – somewhat similar to an Eccles cake which is a bad thing as I don’t like Eccles cake. I found the pastry a chore to chew through. The exceedingly sharp and zesty lemon filling was too strong and sharp, but it was offset by the clotted cream. Although thinner and more milky than I was expecting, it suited the pie better than a thicker, creamier version would have. Overall though I wasn’t a fan of this dessert – the sharp filling and stodgy crust made it a chore and not a pleasure.

Pie in my face.

A lot of people will be put off by Rawduck’s odd, varied menu or its communal tables or, most shallow of all, its Hackney location. That’s a shame, but it makes room for the rest of us to enjoy the skilfully designed and executed dishes. It’s not perfect, but I would still eat at Rawduck again in a heart beat.

Average cost for one person including soft drinks: £35 approx. (£50-60 if you go full hog mental like I did at dinner time)