We do a lot of things that our ancestors would find regressively, inexplicably primitive. In the past (and right now in the developing world while we’re at it), living in a field without running water, electricity or plumbing would be considered poverty. In the modern West, we call it camping and subject our children to it. Foraging arguably falls into the same category – scouring the wilderness for ingredients may turn up the freshest greens, but it seems terribly inefficient and inconsistent to the layman observer.

If chef Simon Rogan is best known for anything, other than having his Cumbrian restaurant L’Enclume appear in The Trip, then it’s for his dedication to foraging. While foraging isn’t explicitly stated to be in use at the kitchen of Fera at Claridge’s, his newest restaurant, the menu is allegedly all about seasonal ingredients. Then again, it’d be hard to find a restaurant in London that claims it isn’t about seasonality – it’s the latest fad.

Larder stocking philosophies aside, the successor to Gordon Ramsay’s old digs in Mayfair has a vaguely art deco look to it that’s not too daring, so it won’t offend any of the moneyed locals. The sharply dressed army of staff are a welcoming and highly efficient bunch – one bod offered to fetch me something to read as I waited for The Euro Hedgie to arrive which was a nice touch.

For some reason there’s a fossilised tree in the middle of the room. How very Lord of the Rings.

Although an a la carte menu is available, eating at Fera is all about the tasting menus. The Hedgie and I went for the full 12 course option which takes around three hours to chow through, but a cheaper and shorter six course option is available too.

The amuse bouche started off slowly, gradually becoming more interesting and piquing my interest for the courses to come. Pea flour wafers topped with a salt cod mousse tasted like a herby, salty crisp that was quickly forgotten. A morsel of mackerel, caviar and cream was so delicate that I managed to accidentally crush it in between my fingers, although I wasn’t missing much judging from The Hedgie’s nonchalant facial expression. 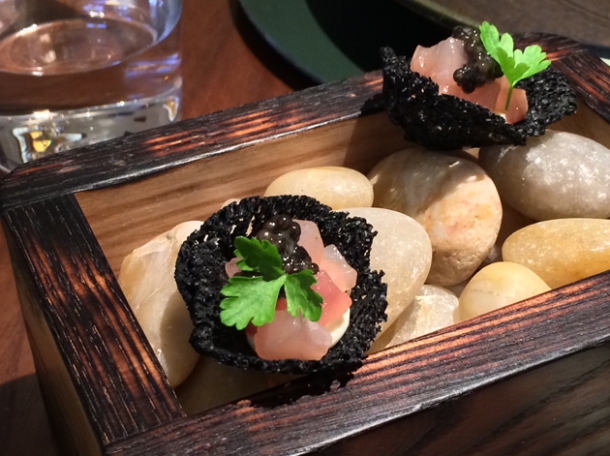 Slipped through my fingers.

More successful was the stewed rabbit with lovage. The plop of moist, moreish meat with a crunchy exterior and a herby hit could well have worked as a larger dish. The same could also be said of the lightly crunchy puff of barley topped with smoked eel which was lightly salty and strongly smoky. My favourite had to be the fried chicken skin though – the crispy, garlicky, meaty morsel was reminiscent of the rich stock of a Jewish chicken soup, but in a bite-sized crunch. 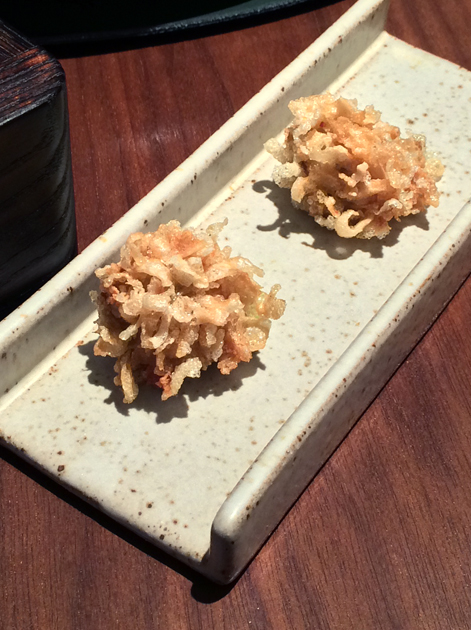 Show me a bit of skin.

A sea of potato with a peekaboo of meat in the middle resembled a piece of abstract expressionist art. It tasted even better than it looked – the fluffy, airy potato purée complimented the small, dense, lightly meaty cubes of duck hearts well. The hearts tasted almost like pig kidneys. As good as this dish was, it’s a good thing that it’s merely one small part of a larger tasting menu – it would quickly become monotonous as a larger dish in its own right.

Heart of the matter.

I’m always surprised when kitchens opt to use solely the head meat of a crab, considering the claw is where the flavour and texture is at. The mildly herby glop of green on top livened it up somewhat, but it was the taut, thick, salty seaweed that was the most interesting part of this dish. Naturally, that meant the few sprigs of seaweed were few and far between.

The hunk of bread that arrived unexpectedly on our table had a very boozy kick to it. The slab of carbs proved to be a good way to shovelling coarse, coleslaw-esque ‘bone marrow butter’ and thin yet tangy gravy into my mouth. 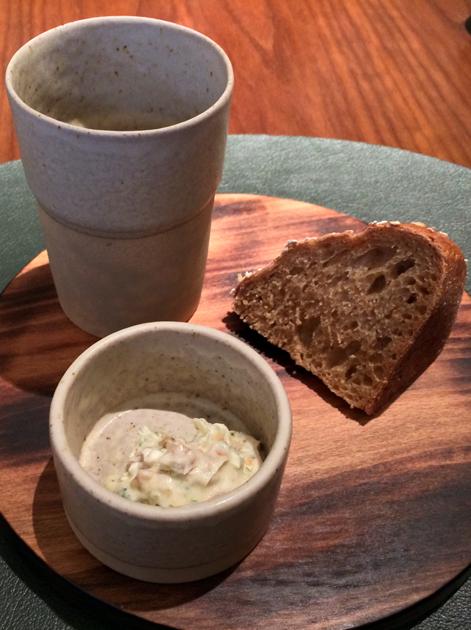 The oddest looking, and tasting, butter I’ve had in a while.

It was hard to appreciate the texture of the cubes of raw beef due to their small size but their meatiness was complimented well by the creaminess of a smoked broccoli cream. However, this was all negated by the other accompaniment of apple juice – its sharp acidity overwhelmed the rest of the dish. It’s somewhat reminiscent of yukhoe, a Korean version of steak tartare, but far less delectable.

The asparagus wasn’t terribly impressive either. Although the texture of the green spears was just right, the dominant flavours of sweet onions and a touch of cream faded quickly into the background.

Things started picking up with the prawns. The fresh zingy crustaceans had an extra layer of moreishness to them thanks to a daubing of pork fat, while the herby greens were lightly crisp and peppery.

Salads usually get short shrift in many restaurants, but not here. The mixture of numerous leaves varying from smoky, mild, crisp and soft provided a multitude of distractions for my mouth, as did the dusting of nutty sunflower seeds. The dressing of truffle custard was mildly creamy, but otherwise far from the decadent mixture of rich flavours its name would suggest.

It’s a shame I couldn’t fit the salad bowl into frame. It was quite something.

Both the Hedgie and I regard plaice as one of the least interesting fishes available, and Fera’s version did little to change our minds. Aside from a slightly crisp crust, the bland fish and its equally uninteresting smorgasbord of accompaniments are barely worth mentioning.

I’m not sure this is my kinda plaice.

Thankfully, the final savoury course was more impressive. Cooked rare, the chunk of hogget was dense and salty with a delicate richness that I wasn’t expecting from sheep meat. The tender, lightly offally pickled tongue was a good match for the hogget, as were the crisp turnips.

Poached pears are a fine dining cliche and I was expecting some clever twist to justify their inclusion in the first dessert. No such twist was forth coming though – chunks of mildly earthy fruit topped by a baked yoghurt that was so airy and light that it was almost like a mousse. I almost mistook the dusting of muscavado sugar for a biscuit crumb – it was that large grained and crunchy. Although far from bad, this dessert merely looked stunning, but tasted generic enough that it could’ve been served almost anywhere.

More unusual, but no more successful was a dessert of beetroot. The meringue-esque beetroot wafer was allegedly paired with buttermilk, licorice and apple, these accompaniments were hard to make out over the dominant earthiness of the beetroot. Monotonous and a little unpleasant.

I wonder what the choice of reading material would’ve been? The FT? Horse and Hound? Razzle?

The final dessert of chamomile milkshake arrived in a vaguely hourglass-shaped beaker, although the thin liquid only occupied the upper portion of the vessel. This meant there was little of it to enjoy which was a shame as the thin, milky, mildly herby brew was quite pleasing. The same couldn’t be said for the accompanying chocolate-flavoured rice cake – it was chewy and tasted of little.

Given both the high prices and the level of hype surrounding Rogan and Fera, I am shocked by the quality of the food. While few dishes were actually awful, the majority were just not up to scratch, lacking the ambitious, skilled, playful and clever combinations of textures and flavours that I was expecting. There were a few highlights, such as the hogget, but even many of these were merely okay and succeeded by not being as underwhelming as everything else rather than truly excelling in their own right. Given the far superior cooking available at similarly priced fine dining restaurants such as Gauthier and The Clove Club, it’ll be an icy day in hell before I willingly eat at Fera again.

Total cost for one person including drinks: £150-175 approx.

8 thoughts on “Fera at Claridge’s review – come back Gordon Ramsay, all is forgiven”