Most new restaurants launch in a blaze of publicity glory with press releases spamming inboxes, repetitively woolly social media chatter, oversubscribed launch parties, a Ryanair-style rush for reservations and fawning coverage from all the usual suspects. Plaquemine Lock, the new gastropub from one of the bods behind Soho’s highly-regarded Bocca di Lupo, has quite notably avoided most of this. Apart from fairly regular updates on Instagram, Plaquemine Lock has been taken a far more low-key approach. There’s been a barely publicised soft launch (which, like most soft launches, I avoid) and that’s about it.

My pet theory for this softly-softly approach is that Plaquemine Lock is deliberately downplaying expectations as it is aiming to be, first and foremost, a neighbourhood pub and eatery for the locals. That theory is backed up by the unusual for a restaurant, but very pub-like reservations system – you can only make advance bookings in-person at the bar.

All this would just be an exercise in restauranteur navel-gazing though if the Louisianan Creole and Cajun food isn’t up to scratch. Here, Plaquemine Lock turned out to have a decidedly mixed record.

I’m not a fan of the murals in the dining area.

Gumbo can take an infinite variety of forms. The version here, available in either a small cup or a much larger bowl, was thick and peppery. Dotted with coarse and meaty sausage, moist chicken on the bone and crisp spring onions, it was a moderately moreish slurp let down only by the lacklustre prawns. Given its merely satisfactory charms, a cup should be more than enough for most. 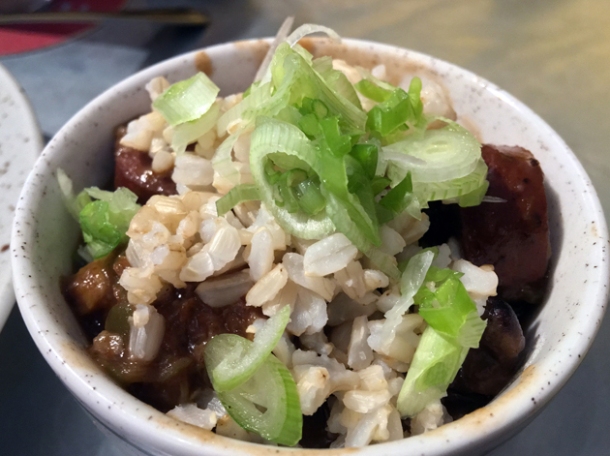 Don’t go jumbo on gumbo. Leave room for other dishes.

The so-so prawns made a repeat appearance in the shrimp and grits, but I didn’t mind given the superlative quality of the grits. It was a beautiful thing in the mouth – grainy and coarse, while also creamy, lightly sweet and nutty. The sweet creaminess meshed beautifully with a gentle yet complex herby bitterness and a hint of astringency with the tang of what tasted like citrus peel. This is easily the best version of grits I’ve ever had in London – especially compared to the laughable version at Red Rooster. 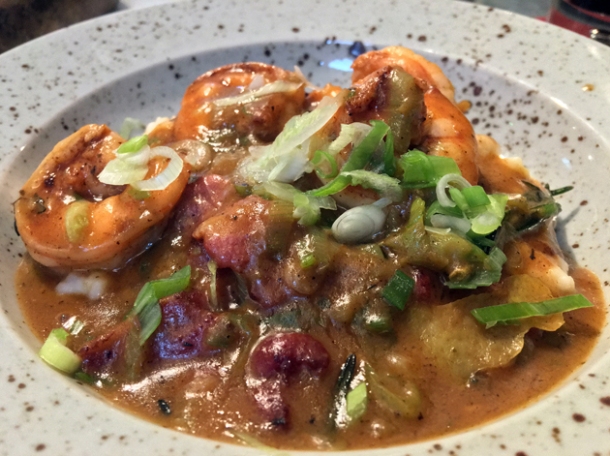 Interestingly, there’s no jambalaya on the menu.

Smoked boudin sausage was served at room temperature with mustard and fleshy okra. Texturally, it was a delight – coarse, grainy and flecked with rice. Somewhat smoky, it was otherwise lacking in flavour and leaned a little too heavily on the warmth of the mustard in that department. It was far from bad and I’d have it again, but it’s not going to dislodge French-style boudin sausages from my affections.

Plaquemine Lock doesn’t exactly sit on Regent’s Canal. Cross the road outside the pub and you’ll be overlooking the canal. 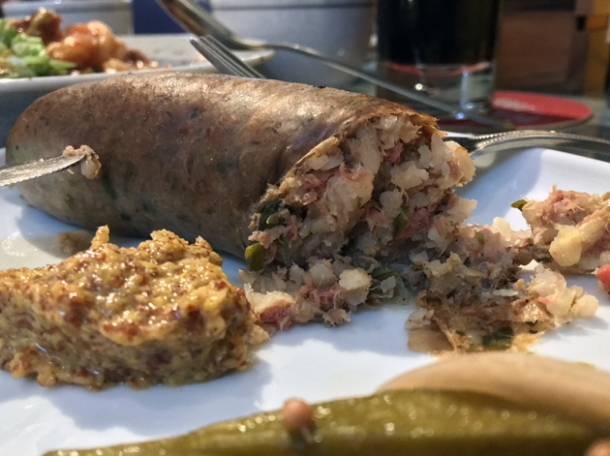 This review’s procrastination was brought to you, in part, by Sigrid.

Any lingering disappointment with the smoked boudin was washed away by the pecan pie. Crunchy and nutty with a malty sweetness probably derived from a dark brown sugar, it was made even better with a tinge of popcorn-like caramelisation. The slice of pie was truly delightful, which made the crunchy ice crystals in the lightly boozy ice cream all the more disappointing. Given that the bod behind Plaquemine Lock is also involved with the top-notch Gelupo, this lapse in the ice cream arts is all the more puzzling.

You can have your pie and eat it too.

The crawfish pie wasn’t what I expected at all, resembling a deep-fried Cornish pasty. The stodgy pastry was even more uninviting than a packed Central line train during a heatwave. The bitty filling was admittedly musky and earthy, but the mere thought of that bludgeon-like pastry bumbling its way into my mouth just fills me with dread.

Encased in soft and floppy batter, the fried green tomatoes were pleasingly sour and tangy. These qualities were oddly muted when the fried green tomatoes were used as a base for serving up chilled shrimp remoulade. Decidedly tepid both in temperature and taste, the prawns were easily drowned out by the creamy sweetness of the marie rose-style sauce. 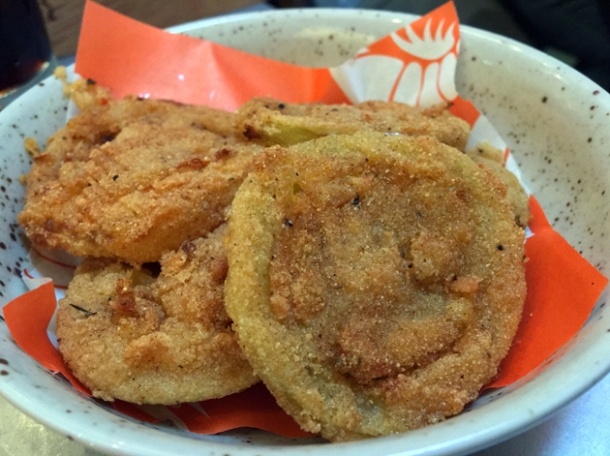 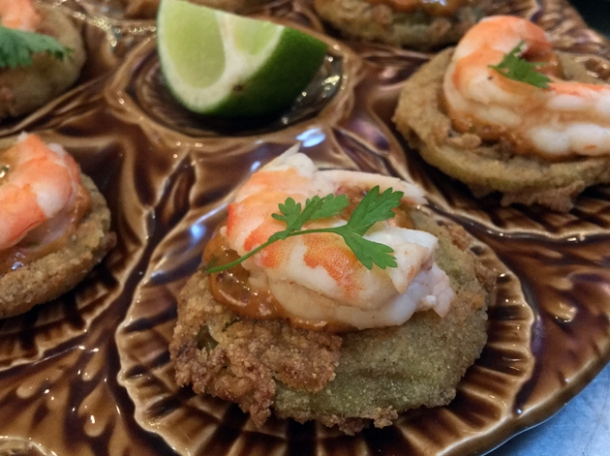 Brown has to be the least attractive colour possible for a plate.

The very soft and squishy bread doesn’t seem especially French, but it was pleasing enough as well as a capable holder and source of carbs in the Peacemaker sandwich. The fleshy, battered and deep-fried oysters are the most eye-catching fillings in this sandwich and they did, initially at least, have a strident salty earthiness. This faded quickly though, leaving it to the crunchy, malty and peppery batter, the creamy mayo and the salty, lightly smoky bacon to pick up the slack. Despite the flash-in-the-pan nature of the oysters, this was still a satisfying sandwich. With more consistently flavoursome oysters, it’d be a firecracker.

Whether or not you like the chilled strawberry and cream pie will largely depend on how much you like jam. The thin, uninteresting pastry and light, airy cream stay out of the way, letting the sugary sweet jam-like fruit filling take centre stage. As someone who didn’t grow up with jam and has thus never developed a fondness for it, I was left unmoved by this dessert.

A disinterest in jam. If there’s one thing that will alienate readers, it’s probably that. Not my general disdain for chicken, my love of andouillette or my liking of sweet potato. Jam.

Baron Greenback joined me for my third meal at Plaquemine Lock, in part so I could jaw my way through more of the menu without having to consume so much food myself in one sitting that my elasticated velour pants would snap and break. We started off by sharing the sandwich filled with roast beef ‘debris’ or ‘scabby little flakes’ as they’re known in the Queen’s English. While the squishy and pillowy bread was as comforting as it was before, the scabby little flakes struggled to stand out against the creamy mayo.

To be fair, the scabby little flakes were at least moist rather than bone dry. Which was small consolation.

Baron Greenback insisted on ordering the deep-fried pork boudin balls. The crisp exterior gave way to reveal, as expected, a coarse and grainy interior that was texturally interesting but failed to pack any taste at all. I’d have been disappointed, except I didn’t really expect any better in the first place which precludes disappointment.

Oddly, the batter used in the fried chicken wasn’t identical to the batter used to coat the oysters in the Peacemaker sandwich. It was more supple, but also plainer. It was still pleasing enough, especially with the moist, lightly unctuous chicken underneath. The spotlight was stolen by the pickled watermelon accompaniment though – its sweet musky tanginess was odd, distinctive and very addictive.

There’s a semi-private function/dining room off to the side of the bar.

Grilled mullet was meaty and moist, yet light. The sweet corn was fine, but I’d have gladly traded it for more of the batterless fried green tomatoes which proved to be even sharper and tangier than the battered versions from my previous meals.

Again with the brown plates.

Tenderised okra served in a tomato sauce was a bit one-note in its fleshy umami, but it worked well enough thanks to its small-ish portion size.

Buttered grits as a side dish was lovely, even if, quite inevitably, it wasn’t as superlative as the version in the shrimp and grits main. Creamy, nutty and coarse – it’s like polenta, but for people afraid of looking too middle class.

Yes, I made a class joke while reviewing a restaurant/pub in Islington. Deal with it.

Doberge cake turned out to be a rather bland and uninteresting rum cake. The pecan pie was just as good it was before, if not a little better as the ice cream was a little smoother this time. Although not totally free of crunchy ice crystals, it was still an improvement. 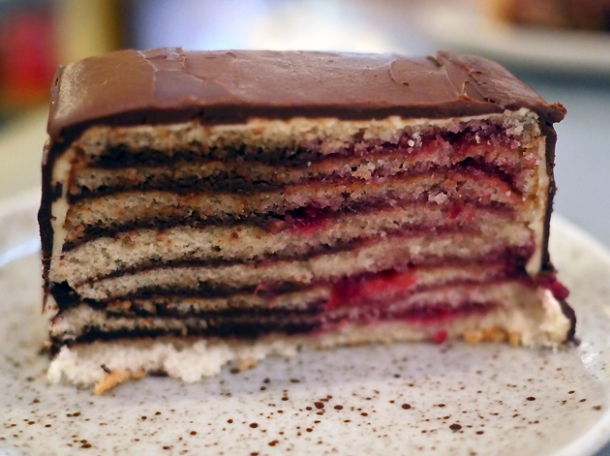 Given the promise shown by the battered, deep-fried oysters in the Peacemaker sandwich, I was willing to give some of the other cooked oysters a chance. That turned out to be a mistake. A half dozen cooked Link-style saw the plump and briney oysters reduced to a delivery mechanism for a one-note spicy sauce. A half dozen cooked Rockefeller-style was even less impressive with an indistinguishable and undistinguished melange of spinach, herbs, butter and breadcrumbs bludgeoning the oysters into oblivion. 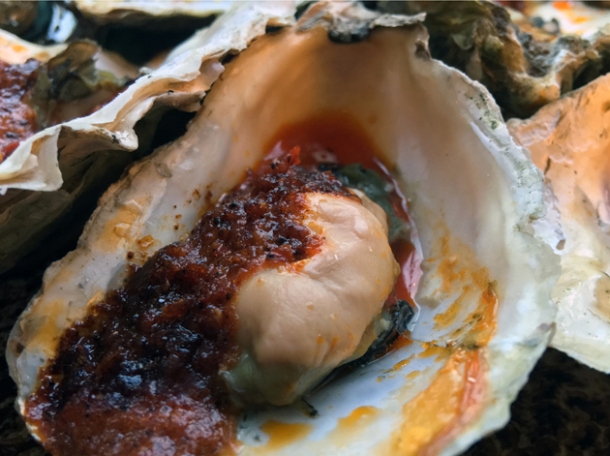 Leave it all behind.

Stuffed crawfish bisque saw the use of only the heads, but the earthy head gunk is one of the best parts of almost any crustacean so that’s not necessarily a bad thing. Clean tasting body flesh would’ve not only added a bit of variation in taste and texture, but would also have helped the crawfish outweigh the accompanying rice and tomatoey bisque. It would also have helped justify the relatively high price, given that around 500g of boiled crawfish is available for around the same price as the bisque. This dish isn’t bad, but it’s not great either.

An Étouffée in everything but name.

Bittersweet, smooth and reasonably rich chocolate ice cream proved to be the Plaquemine Lock ice cream that I could embrace wholeheartedly. The ‘spiced’ pecans were no such thing, but they fulfilled their nutty contrast role more than well enough that I could overlook this.

The cooking at Plaquemine Lock certainly pleased a gaggle of visiting Louisianians during one of my visits. I enjoyed all my meals at this canalside-ish gastropub, with a few dishes hitting all the right notes. However, the majority of the cooking here tended to be far less exemplary and often ended up merely satisfactory. Plaquemine Lock is therefore not quite good enough to travel across town for, but if you’re in the Islington area, especially if you’re a local, then it’s certainly worthy of your time and custom.

What to skip: Crawfish pie; Link and Rockefeller oysters

Reservations: can only be made in person at the bar. Highly recommended the closer you get to the weekend.

Average cost for one, including soft drinks: £35-45 approx. (will escalate quickly if you order booze and lots of oysters)