I try to avoid mentioning celebrity chefs when writing about their restaurants. Apart from trying to avoid the cult of personality that most newspapers trip over themselves to indulge in, I just don’t think it matters to the experience for the diner at the end of the day. I’ll make a brief exception for Marcus Samuelsson, the executive chef behind Red Rooster at The Curtain. This Shoreditch outpost of the original Red Rooster, an American-ish soul food restaurant in New York, has an even more eclectic menu reflecting Samuelsson’s unusual Ethiopian-Swedish-American background.

Eclectic menus can work well, but Red Rooster’s dizzying slate triggered my bullshit klaxon with its seeming lack of focus. This apparent absence of restraint and direction was mirrored in the frenetic mish-mash of vaguely Harlem-themed paraphernalia lining the basement dining room. Despite the clear expense put into it, the decor skirts too closely to theme park territory for my liking. And despite having two floors to play with, the ground floor dining room is devoted to a separate, but related taco restaurant called Tienda Roosteria. Getting one new restaurant right is hard enough. Adding another into the mix is playing with fire.

The result was an almost unending litany of mediocrity and failure including the most pitiably, repulsively awful meal I’ve had this year. That dinner may even qualify as one of the worst meals I’ve ever had in London (outside of an airport) in six years of reviewing restaurants in the capital.

It wasn’t pretty. Very little of it, once I dug beneath the veneer of superficial attractiveness, was pretty.

This one isn’t the unutterably awful meal of the year. That one is coming.

My first meal at Red Rooster actually started quite promisingly. Good cornbread is hard to find in London, which made Red Rooster’s version all the more appreciated. Moist and tightly crumbed with a sweet nuttiness, it puts the vast majority of the capital’s other cornbreads in the shade. The tomato chutney was prune-like in its sweet tartness, while the unexpected caramelised nuttiness of the butter proved surprisingly addictive. Both were potent enough that slathering them on top of the cornbread amounted to the savoury equivalent of overegging the pudding, but they were enjoyable in moderation. 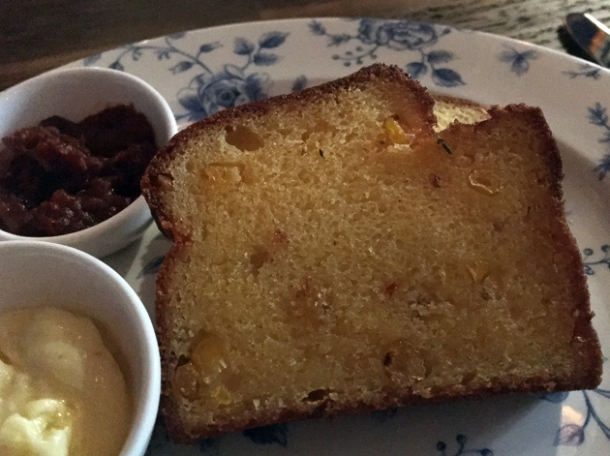 One of the few unquestionably good dishes at Red Rooster.

I was rather unfussed when I first encountered the somewhat odd combination of fried chicken and waffles a few years ago in New York. The version here was satisfactory enough – moist chicken battered in a crunchy then supple coating, sitting atop a soft and fluffy waffle that wasn’t too thick. I still don’t see what the fuss is all about, but this straightforward meat-and-carb combo was inoffensive enough.

It’s rare that a restaurant turning down the lights will totally thwart my photography attempts. This wasn’t one of those occasions.

It’s an odd kitchen that somehow manages to rustle up a half-decent troupe of prawns and then plonks them on a bed of mangled and malformed grits. The prawns were firm and reasonably zingy – some were butterflied, some not. The bland, watery grits were deeply disappointing though. It’s a very sad puddle of grits that’s reliant on a garnish of basil and a dribbling of umami tomato sauce for character. 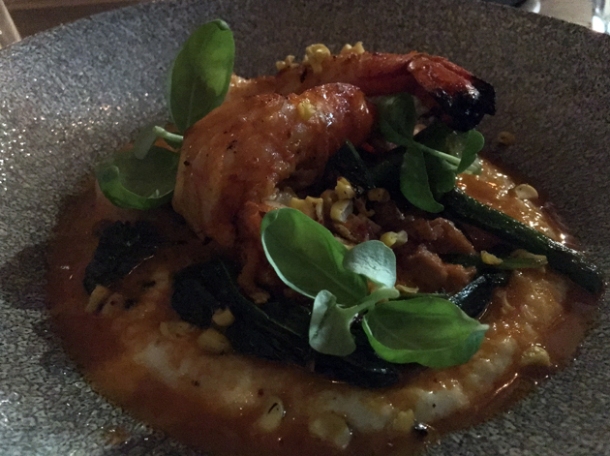 The creamy, gently tenderised selection of vegetables in the succotash helped wash away some of the disappointment brought on by the grits. 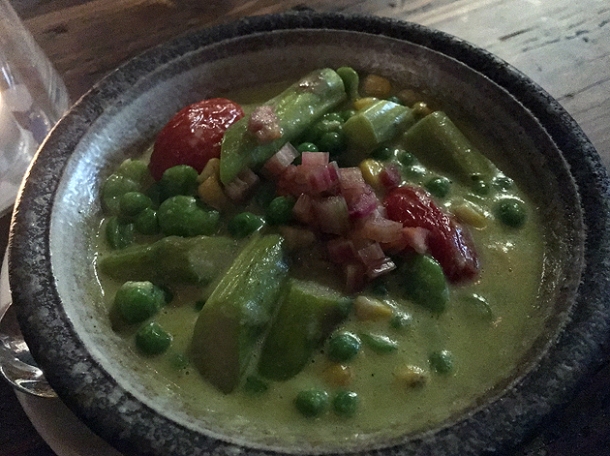 The ‘red velvet’ ‘cake’ was nothing of the sort, but more of a generically sweet airbag of cotton wool softness. Like the average sneeze, it was soon expelled from my body and forgotten. 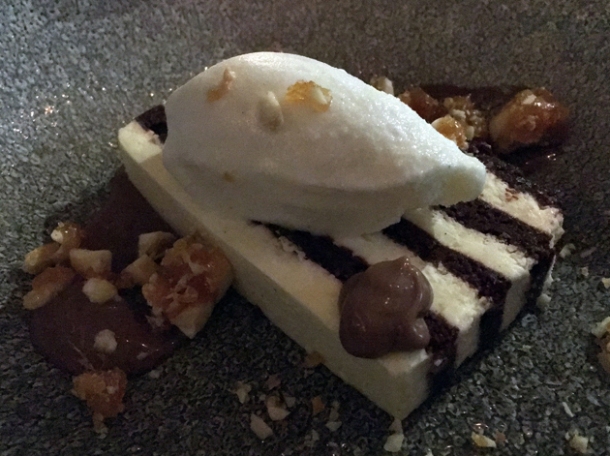 The beginning of a theme.

Nope, this isn’t the teeth-gnashingly embarrassing meal of the year either. That one is coming. Soon.

‘Devilled’ eggs conjures up images of a sinfully decadent delight. Not halved hard-boiled eggs filled with an oddly wispy, vaguely creamy and ultimately unmemorable effluent. The wafers of ‘duck salame’ marking each egg like a gravestone was more like brittle bacon with ideas above its station.

Less of a sin and more of a tut-inducing misdemeanour.

Thick wafers of herring were best appreciated without all of the distracting and unnecessary accompaniments. Hearty bread, gently softened potatoes and a sumptuously rich egg all got in the way of the smooth, briney and dill-infused herring.

The egg accompanying the herring was actually better than the devilled eggs.

The advertised chilli vinegar was conspicuously absent from the collard greens. Even so, the supple and bitter leaves made this simple side dish one of the more successful things to have passed my lips at Red Rooster. 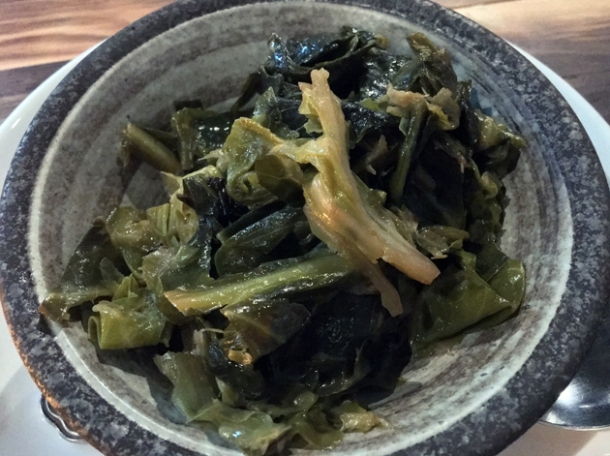 There’s live music most nights at Red Rooster which is a curious use of space. Some of the acts are surprisingly good, but the acoustics aren’t always up to scratch with the high end distorting and screeching against my ear drums in some cases.

Fried chicken turned up again in the form of the ‘Fried Yard Bird’. Oddly, while its battered coating was similar to the one gracing the chicken and waffles, it wasn’t identical with an intermittent hint of paprika to it. The chook underneath was moist and meaty, while more collard greens on the side had an unexpectedly pleasing mustardish quality to them. The inedibly, overly sweet yam puree was left uneaten though. 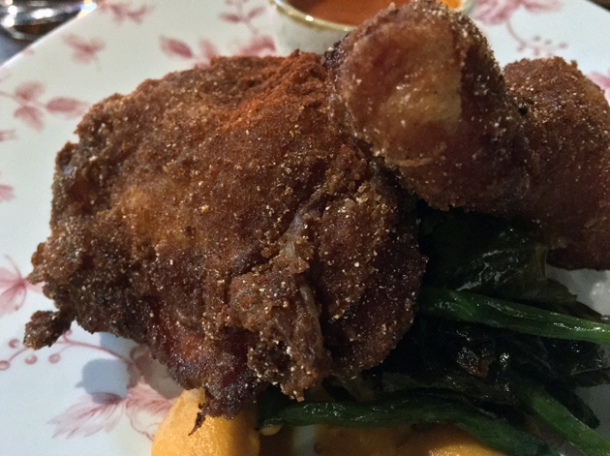 The euphemistically named ‘Rooster Juice’ was actually an iced tea. Well, allegedly an iced tea – it tasted more like a honey-lemon cold remedy.

This second meal, which had been unbalanced but not too bad overall up until this point, ended badly with the Drunken Doughnut dessert. The doughnut itself was a bit too chewy in places, and then soft and unremarkable in others, while the apologetic lemon curd wasn’t sweet or tart enough. The sickly sweet marzipan wasn’t what tipped this dessert over the edge from insipidness into misery-inducing territory, though. That dubious honour went to the overly salty, comically sweet and grimace-inducing bitterness of the bourbon salted caramel ice cream which left an almost indescribably foul aftertaste in my mouth.

You’d have to be deeply, hilariously drunk to consider eating this.

The ground floor Tienda Roosteria taco restaurant feels airier than its basement sibling, despite being smaller, due to the big windows letting in plenty of natural light. It had a similarly buzzy atmosphere too and service which was consistently friendly and efficient, unlike the downstairs which suffered from staff that were either overly eager to please, hovering just out of sight like wasps, or oddly brusque.

None of that could make up for the tortillas which were oddly yet consistently malformed despite the array of colours they came in. Although nutty, there was almost soft and doughy in places and yet oddly brittle in others – especially when folded. The vast majority of the fillings had little to say for themselves.

‘Doro wat’-style chicken bore little resemblance to the Ethiopian/Eritrean dish, tasting of little if anything at all. What meagre character it had was drowned out, not by the collard greens, but by the earthy goat’s cheese.

Vaguely smoky cauliflower made up the bulk of the sole vegetarian taco option. While not bad, it was the sharp and mustardy quinoa and pickle accompaniments that took the spotlight here.

Chunks of generic white fish came in a batter that was strangely chewy, albeit not unpleasantly so. A limp sauce and somewhat crisp vegetables rounded out this underwhelming taco.

This review’s procrastination was brought to you, in part, by Cooper Boyes & Simpson.

Smoky, meaty pork was spoiled by an excessive dousing of sweet citrus juice that gushed everywhere. It would’ve been funny if it wasn’t so bloody annoying. 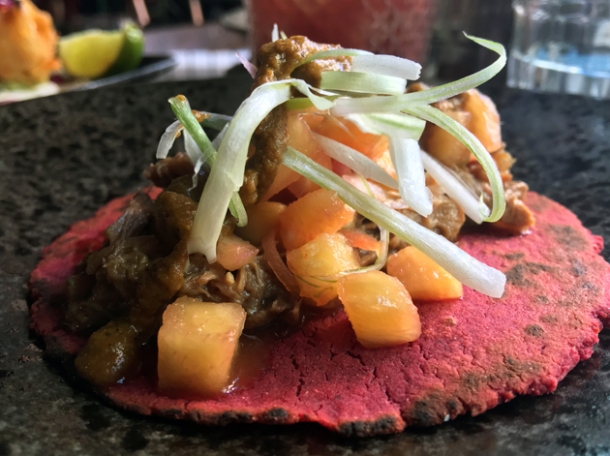 The pork taco was nonetheless one of Tienda Roosteria’s more successful tacos alongside the second chicken option. This one had mildly smoky chicken dressed in a thin sauce that was occasionally, modestly tingly and topped with pickled ginger and carrots. It was hardly a barnstormer, but I’ll salvage what little joy I can where I can.

On the road again.

The worst meal of the year. And it’s only June.

It’s rare to encounter a drink that’s so repulsive as to be undrinkable. The Running Wild, the only other non-alcoholic drink listed on the menu beside the Rooster Juice, had a lip-curling astringency. It smelt and tasted like soap.

The tiresomely named ‘Loaded’ popcorn was repugnant in its own special way. Hard, tooth-grinding popcorn came bathed in a sauce that was sickly sweet in places, almost inedibly sour in others. Even the strips of bacon were frown-inducing, with a seemingly artificial smokiness that would’ve been grounds for impeachment on any other dish. Here, it was a welcome respite.

Don’t eat it, use it to grit roads instead.

The bone marrow meatballs were, apart from a vague hint of extra moreishness, almost indistinguishable from any other competent rendition of Swedish meatballs. This would’ve been fine but for the sauce which was obnoxiously sickly in its excessive creaminess. Not even the bold dill and sharply tangy pickles were enough to offset it. If I wanted to swallow balls dripping with a seemingly unending supply of revolting white fluid, I’d call one of my exes. 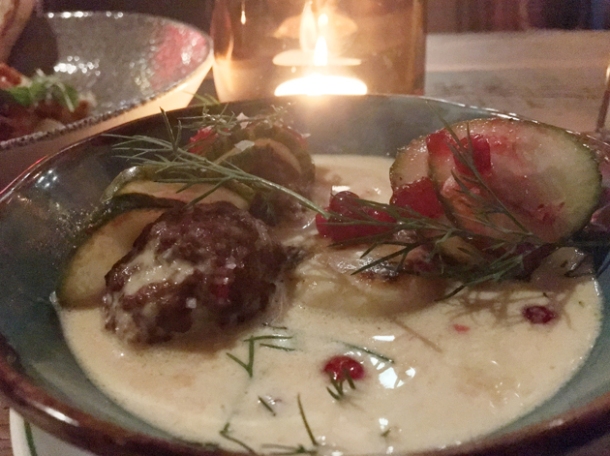 ‘Dumplings’ turned out to be surprisingly good gnocchi with an ethereal fluffiness. The kitchen nevertheless managed to snatch defeat from the jaws of victory by dousing the gnocchi in a grotesquely sweet red sauce. Dotting the sauce was a meat that was allegedly lamb, but this poor beast had been pulverised into a charmless slurry even worse than pub-quality pulled pork. The occasional fava beans and olives would’ve provided some relief, but for the Dead Sea-like saltiness of the olives. Even the slices of cheesy garlic bread were an abomination – dried, dusty husks that are better suited for use as wall cavity insulation. This dish was a disgrace. An utterly repulsive and grotesque embarrassment to the culinary arts.

I have lost the will to live. Simply nothing more to give.

This careering car crash of a meal ended with the summer tartlet. Thin pastry with already an excessive sugariness came filled with a fruit and cream combo that had nothing to offer beyond ratcheting up this dessert’s already wince-inducing sweetness to kidney-threatening levels. Even the strawberry ice cream was a disaster zone – uncomfortably cold with intrusively crunchy ice crystals throughout. This dessert wasn’t just garbage, but a flaming dumpster truck full of garbage on cinder blocks.

Red Rooster may be in Shoreditch, but it feels more like a designed-by-committee restaurant that would be more at home in the City. It’s situated within a plush hotel with a pricey fit-out, long opening hours and a seemingly crowd-pleasing menu put together by a chef with celebrity connections. That really is everything you need to lure guffawing City boys, disoriented tourists and other ignorant souls through your doors.

There are one or two things that would be worth ordering if you were forced to eat here with a gun against your head. The cornbread was genuinely good and the fried chicken dishes were, by and large, competently done. But those are meagre consolation prizes given the the Boschian garden of dubious delights ranging from the merely mediocre or unbalanced to the downright atrocious. Although it’s possible to scrape by with a bill of around £30 including soft drinks at Tienda Roosteria, eating your fill downstairs at Red Rooster sees the damage coming in at around £60 including soft drinks. Given the standard of cooking, that is completely unjustifiable.

What to avoid: Everything else, especially the god-awful desserts

Name: Red Rooster at The Curtain

Reservations: essential the closer you get to the weekend (this hole is actually popular)

Average cost for one person including soft drinks: £60 approx.