There’s been a small boom in American-style barbecue restaurants in London since I first started covering the cuisine in-depth. New openings tend to be fairly traditional though, at least in principle, in both cuts of meat and technique. They also tend to stick to all the old hoary BBQ shack décor clichés – weathered wood and corrugated metal fittings that are more at home in a theme park than in a restaurant for grown-ups.

Shotgun, from the people behind Marylebone’s Lockhart, has taken a different tack. The interior, for starters, is decked out in polished wood and brass so it feels more like a cosy boozer than the result of a misguided restaurant consultant’s meeting. The menu is different too, taking in cuts of meat not usually seen in American barbecue smokers. It’s worth bearing in mind that the menu changes fairly frequently. The portions are also relatively small compared to some other barbecue restaurants, but the artistry on display is almost in a class of its own.

Distressingly, the bar is usually propped up by a disproportionately large number of avocado brunch loving Sloaneys.

There’s a subtle south-of-the-border influence on Shotgun’s menu that’s most obvious in the tamales, a classic Mexican dish. Although seemingly incongruous, this steamed cornmeal dish is somewhat similar to grits. The version here is apparently cooked and served in grease proof paper rather than corn husks though. Sadly, the lumps of cornmeal here were generic tasting mush with only a tame chilli sauce on the side for company. 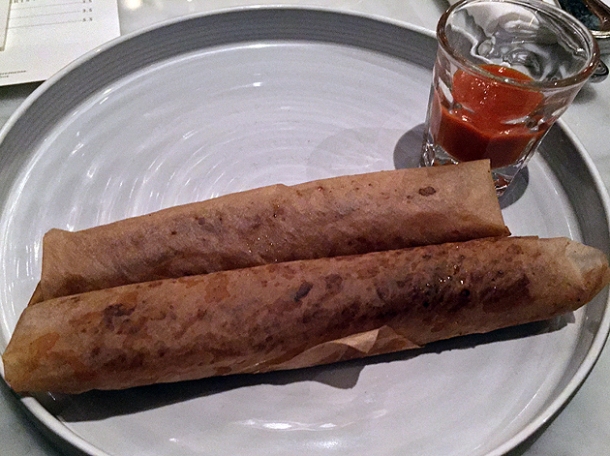 The Combination Plate changes depending on what meats are available that day, allowing you to sample three in one sitting. On my visit, one of the highlights was the goat shoulder. Somewhat like Cantonese-style cha siu pork in appearance and texture, the dense and earthy slices of meat were a pleasure to behold and devour.

There’s no ‘I’ in ‘team’, but there is in ‘meat combination plate’.

Shoulder to lean on.

The brisket wasn’t as barnstorming as the versions of this classic cut available at competitors such as Red’s True Barbecue, but it was still tender and unctuously fatty. It also had a subtle but nonetheless beguiling musky sweetness that’s quite unlike anything I’ve had before in a barbecue restaurant.

Today’s procrastination was brought to you by Have I Got News For You.

I wasn’t expecting much from the pork belly, so I was pleasantly surprised by the tender, almost delicate texture of the swine flesh. Even better was the thin but flavoursome layer of fat which had the same musky sweetness as the brisket. I suspect this may come from a dry rub and whatever wood Shotgun’s kitchen is using in its smoker, but don’t hold me to that.

The sides shouldn’t be overlooked. The sweet potato fondant shouldn’t work, but it does. The cubes of peach-coloured sweet potato were almost plantain-esque in their sweetness and had a delicately fluffy yet smooth texture similar to Cantonese taro cakes. The addictiveness quotient was multiplied by the topping of smoky, crunchy, sweet and nutty pecans. The contrasts in taste and texture somehow melded together beautifully. 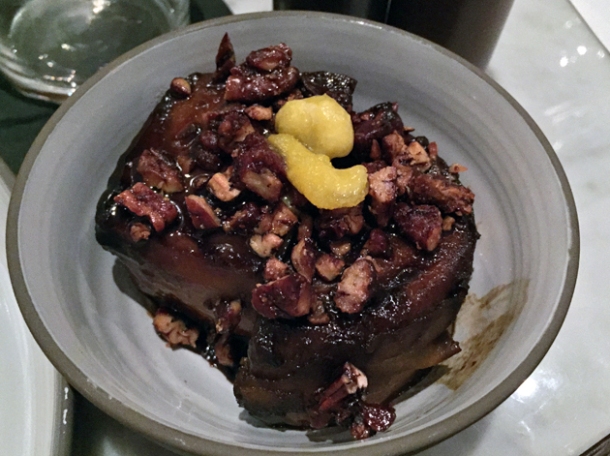 Surprisingly divisive. For some.

The beans couldn’t steal the limelight from the sweet potato fondant, but were still pleasing in their own right – moderately firm beans in a tangy sauce dotted with meaty morsels of pork. And sesame seeds for no apparent reason. 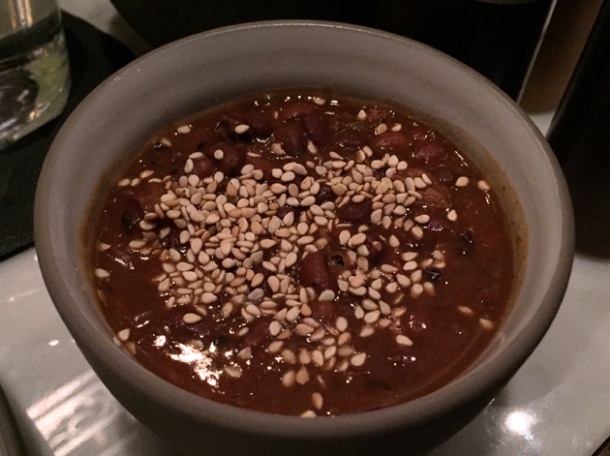 Spooned from a serving bowl the size of a small moon, the banana pudding looks like a mushy mess on the plate. As is often the case though, looks are deceiving. The tangy sweet banana cream would be more than good enough on its own, but is made even better by the biscuits which range from crisp and crunchy to soft and yielding. Bosom-clutching home comings are made of puddings like this. 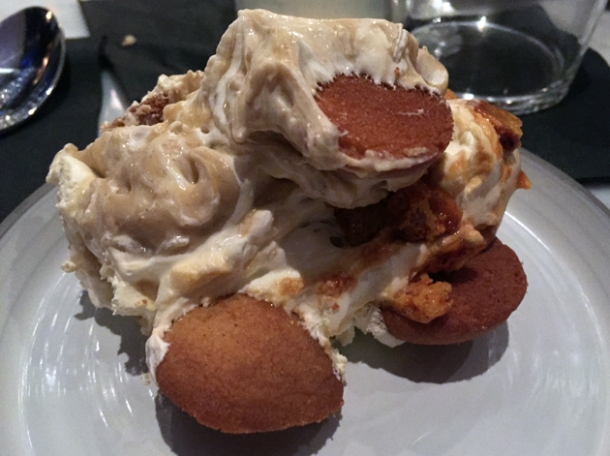 Devilled quail eggs sounds like a dish that should be served in a gentlemen’s club rather than a barbecue restaurant. These little eggs were disappointing though – gone in a second, the tame spiced sauce daubed on top and the bed of mildly crunchy pork scratchings did little to embed them into my memory.

Shotgun’s duck breast was served rare, but this left the meat too chewy and bland. There was a hint of smokiness, but the poultry was largely dependent on salt for flavour. The non-descript nature of the breast meat was all the more surprising given the neatly rendered layer of fat and supple skin. 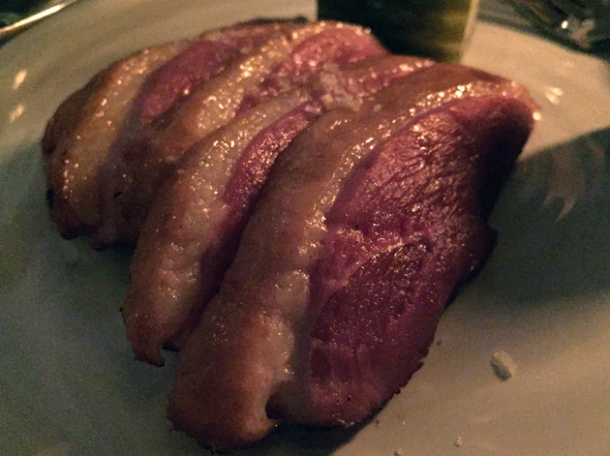 Keeping abreast of all of London’s barbecue restaurants.

Pulled pork turns up on the menu under the guise of ‘Boston butt’. While pulled pork elsewhere has turned into a generic pile of mush shoved into a bun, here it has been elevated to new heights. Firm with a woody bark, an occasional lick of fat and a fruity heat reminiscent of habanero peppers, it’s quite unlike any pulled pork I’ve had before.

Shotgun oddly serves its beef short rib (otherwise known as a Jacob’s Ladder) off the bone. Their version was therefore lacking in both the fat and the connective tissue that’s a big part of this cut’s appeal. Even so, Shotgun’s version was still enjoyable enough thanks to its dense, smoky, woody meatiness.

I’m not usually a fan of pork baby back ribs, preferring spare ribs instead. That wouldn’t be the case though if all baby back ribs were as good as Shotgun’s rendition. The woody bark gave way to reveal a thin strip of smooth and dense yet yielding flesh that peeled away from the bone as glossy lacquered layers blessed with a hint of smoke. It was more like a lightly smoked gammon joint and thus light years ahead of the bland meat dependent on insipid sauces that usually makes up a rack (or half rack) of baby back ribs.

Stop staring at my rack.

Although allegedly paired with bone marrow, I couldn’t detect much meaty or smoky influence in the thickly cut slices of beetroot. They were still earthy and moist though. 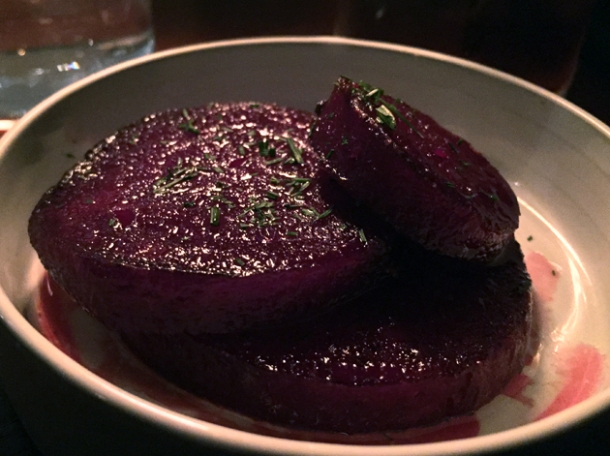 Although not anywhere as decadently gooey as a Paul A Young brownie, the brownie here was still reasonably enjoyable. Part sponge and part fudge, the brownie was dotted with the occasional crunchy, nutty pecan pieces.

The irredeemably squeamish will be instantly put off by the very mention of the pig’s ear pancakes, never mind their actual appearance and texture. All folds and cartilage, you could never mistake them for anything else. They’re not just skin and bone though – the large ear was surprisingly supple and unctuous, qualities emphasised by the sticky, smoky glaze. This is all lost when slices of ear are eaten wrapped in torn pieces of the accompanying pancake, so they’re best taken separately. Despite appearances, the pancake is really just a standard pancake and not a teff-based injerra bread to which it bears a passing resemblance. 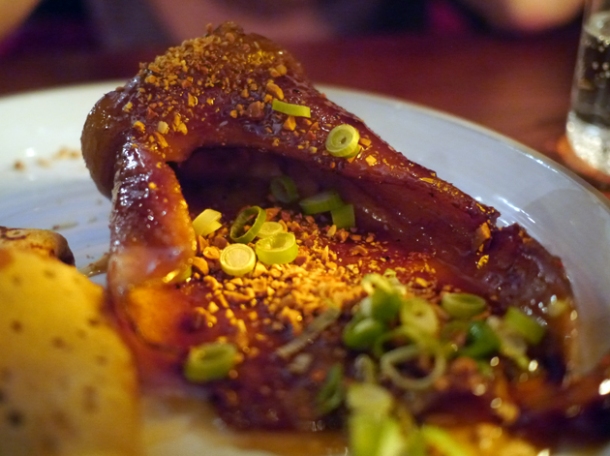 No, I have no idea why the pig’s ear comes with a pancake.

This pancake makes a pig’s ear of the pig’s ear.

I had thought that sweet potato was a universally liked tuber, but a Twitter conversation revealed a surprisingly intense dislike for it in some quarters. If you do like sweet potato, or at least have an open mind, then it’s likely you’ll love Shotgun’s sweet potato fondant just as much as I did. It was just as good as it was before.

For tuber traditionalists, there’s always the potato puree which was essentially a very smooth and very unctous mash.

I was less enthused about the ox cheek served with pickled porcini mushrooms. While the latter were suitably tart, the meat itself wasn’t sufficiently different enough from the boneless beef short rib to hold my interest for long. While lean, dense and reasonably moist, it was lacking in depth of flavour – especially given the large portion, ostensibly designed for two but which even I and the equally ravenous Snaggletooth struggled to finish with much enthusiasm.

Chicken is the bland, safe, boring meat of choice for children, but it does tend to smoke well taking on bold flavours easily. The chicken leg quarter here was very smooth with taut, lightly moreish skin. The smokiness was at its strongest in the strip of meat closest to the bone where it almost resembled gammon, but the smokiness was far too subtle and sedate everywhere else. This made chowing through this chook a bit of a chore, but at least it wasn’t drippingly greasy like many barbecued chickens elsewhere. 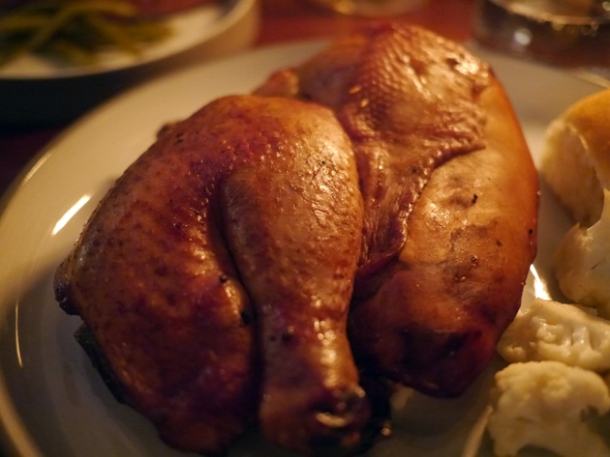 Although coarse, chunky and meaty, the Toulouse sausage wasn’t quite as garlicky or as smoky as I would have liked. It was still pungent enough to leave a distinct odor on both my breath and Snaggletooth’s, so it was still a success. 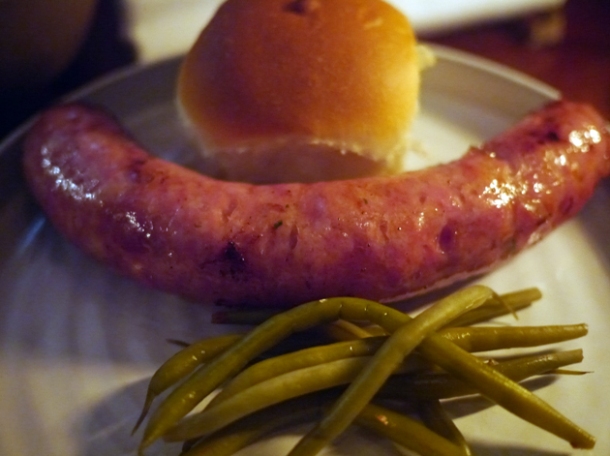 If you don’t eat there, then you have everything Toulouse.

Shotgun’s banana pudding was just as good as it was before and was wolfed down in short order by Snaggletooth. My soft serve ice cream just couldn’t compare with its mild chocolate and sour cherry flavours.

Shotgun stands apart from the other American-style barbecue restaurants in London. It has more in common with Pitt Cue with its more subtle flavours and unusual cuts of meat, but that’s no bad thing. With Hot Box, Red’s, Miss P’s and Smokestak holding the fort for old school BBQ, there’s finally room for experimentation and whimsy. Having said that, the experiments that were most successful were generally the ones that had some link with tradition – the Boston butt, baby back ribs, brisket, pork belly and goat shoulder were far, far better than the duck and ox cheek, for example. If Shotgun represents (part of) the future of American barbecue in London, then it can’t arrive soon enough.

Average cost for one person including soft drinks and service: £40-50 approx.