The quality of American-style barbecue in London has made leaps and bounds in the past several years, but continual progress is by no means guaranteed. There’s no clearer example of the potential for setting back an entire genre through massive incompetence than Low, Slow and Juke. Owned by pubco Marston’s, this underground bar and restaurant is effectively a rebranded and retooled version of The Abbey pub which used to occupy the same site.

This restaurant may be located a short walk from Parliament Square, but the decor appears to have been recycled from a low-grade Americana theme park. It’s not entirely cringe worthy with some attractive tables dotted about, but the purely decorative faux windows above the bar are baffling in their silliness. 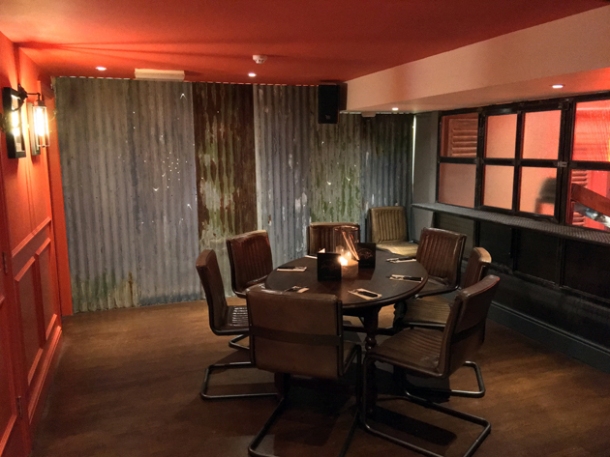 Oddly, the mezzanine level and its tables were closed on two of the nights I visited this restaurant. 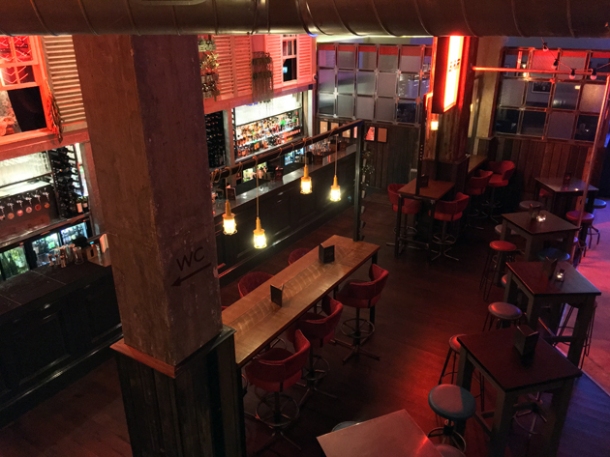 Some damn fool actually put a CRT TV playing the Blade Runner trailer inside one of the fake windows. Because that’s a good use of time and money. 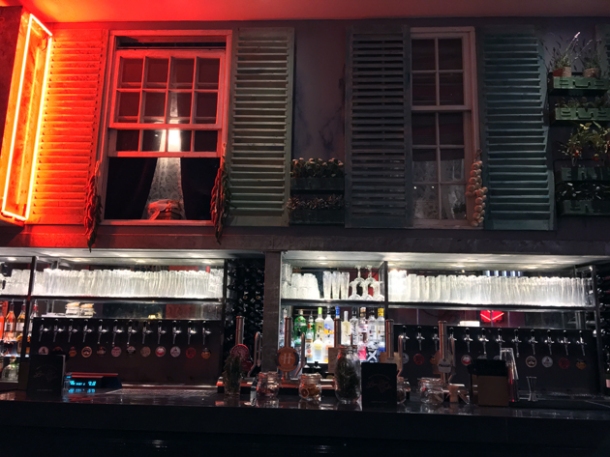 If only they had put as much effort into the food.

If there’s one good thing about Low, Slow and Juke then it’s the staff who were almost all friendly and helpful. The barbecue itself, on the other hand, was utterly deflating and depressing in its dire awfulness.

Burnt ends and Brisket at Low, Slow and Juke

It’s a bad sign when the best dish of my first meal at this supposed barbecue restaurant was the ‘smoked bacon fat popcorn’. Especially when said dish turned out to be nothing more than plain popcorn with some salty bits of chopped, fried bacon thrown in. 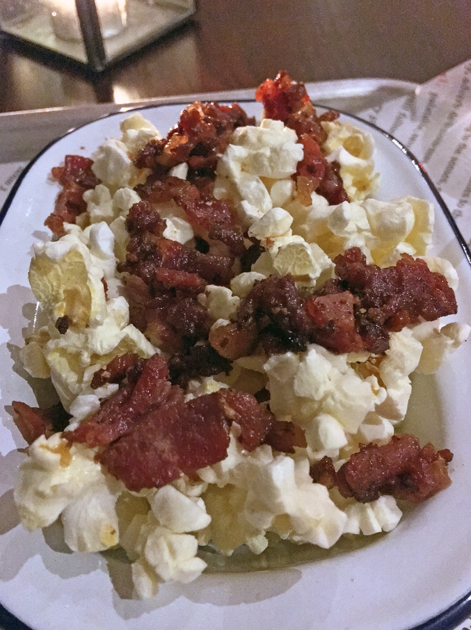 Burnt ends are very hard to do well and it’s thus no surprise that very few London barbecue restaurants serve them. The version at Low, Slow and Juke was deplorable – tough, dry and bland. The beef chunks were so leathery tough that I had trouble cutting them into digestible pieces using the standard table knife provided. They were so bland and devoid of moistness that the tomato sauce slathered on top was a lifeline, not an optional condiment. I would feel bad about serving such garbage to a dog, never mind an actual person. 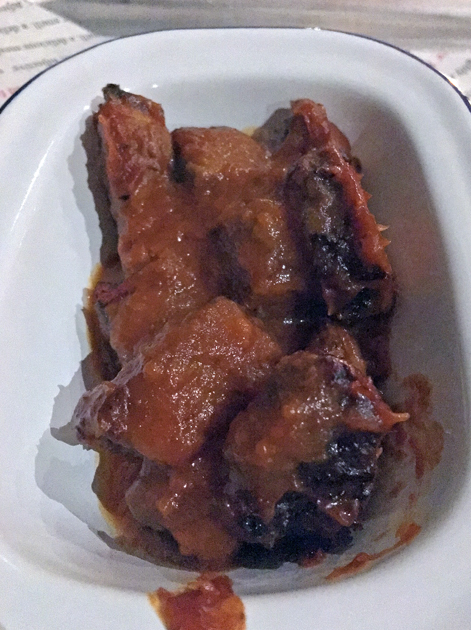 The brisket was just as tough and bone dry as the burnt ends. It was also so tasteless that it was completely dependent on the same tomato sauce for any kind of flavour. If you attempted to serve this brisket in Texas, then you would be promptly laughed out of the state. The accompanying pickles were no better. Only very marginally vinegary, they barely deserve the name ‘pickle’. 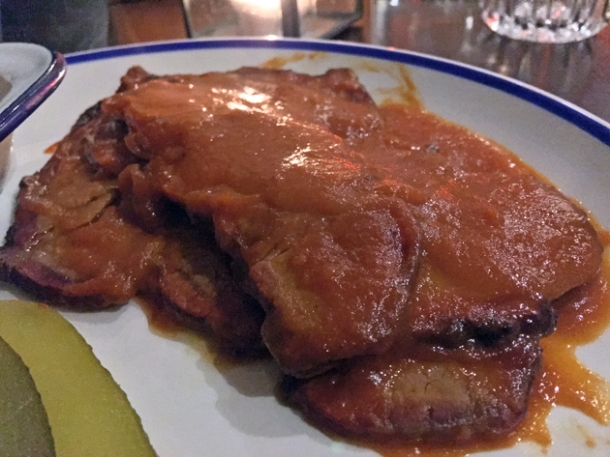 Tough as nails. And painted just as red.

Fried pickles were just as bland as the ones served with the brisket. The battered exterior was frustratingly inconsistent, ranging from oily and soft to crisp and golden. 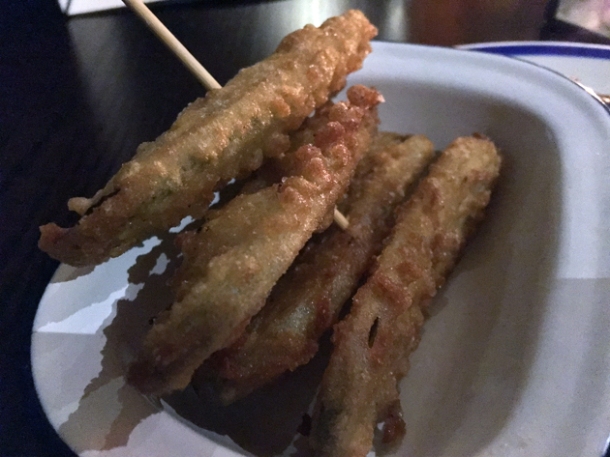 There seem to be a lot of low-level mandarins and provincial quango staffers in this place.

The lemon meringue pie had all the appetising appeal of lemon-scented washing up liquid – the foam-like meringue was almost inedible in its sourness. The pastry of the open topped pie not only tasted of cheap margarine and excessive amounts of sugar, but was so hard that I literally had to dig and grind my spoon into it to break it apart. A clear waste of time, effort and calories, I had to console myself instead with the odd accompaniment of meh brownie pieces and a bland vanilla ice cream that was so uncomfortably cold that I had to wait for it to melt before it became even vaguely edible. 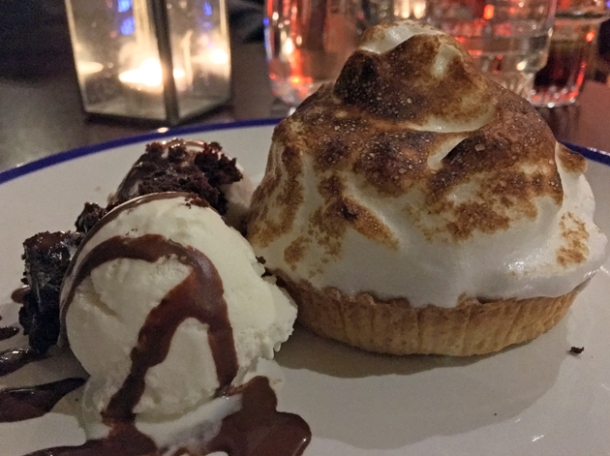 Baby back ribs and beef ribs at Low, Slow & Juke

My first meal at Low, Slow and Juke was so unbelievably bad that I seriously considered not returning. But my curiosity and desire to give the staff the benefit of the doubt got the better of me – perhaps the serving of contemptible dreck was a catastrophic one-off. Sadly, it wasn’t.

The baby back ribs were so hard that after hacking away at the meaty gap between the bones, I still had to apply a fair amount of force to wrench the bones apart. The effort wasn’t worth it – the rigid pork was characterless with no hint of any kind of flavour. The lashings of very mildly spiced sauce suggests that someone in the kitchen knows they’re serving up a culinary embarrassment and are trying in vain to cover it up. 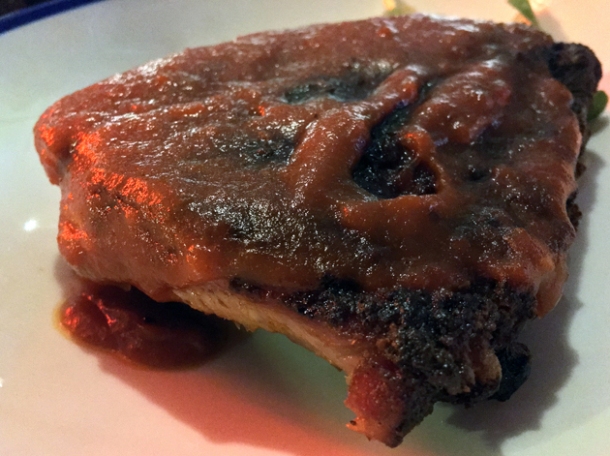 Look on my works, ye Mighty, and despair! 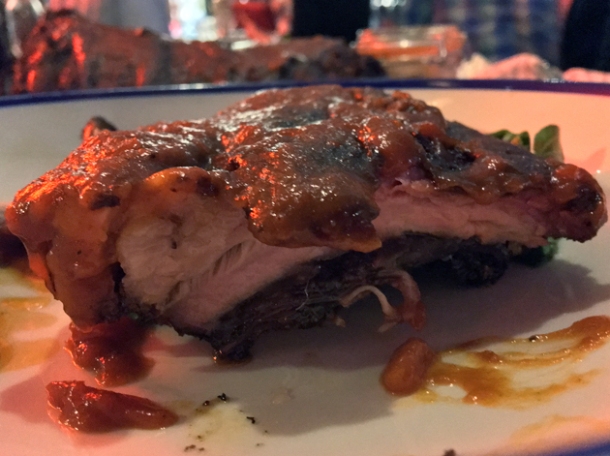 The beef ribs look big, but the amount of bone far outweighed the actual meat present. Almost certainly back ribs rather than short rib, the bark was blackened and tough. Although not quite as hard or leathery as the vile baby back ribs or the foul burnt ends and brisket, the beef here was still nowhere near as tender as it should’ve been if it had actually been smoked properly.

It also tasted of nothing. I’ve had ‘roast’ beef sandwiches from petrol stations with more flavour. There were no seams of fat and what little collagen present was either hard or chewy. It’s as if someone picked the cheapest but biggest slab of beef ribs available, applied a badly prepared rub and then smoked it for the shortest amount of time possible. If you’re superficial enough to be impressed by appearances and size rather than actually quality, then this is the badly cooked waste of animal life for you. 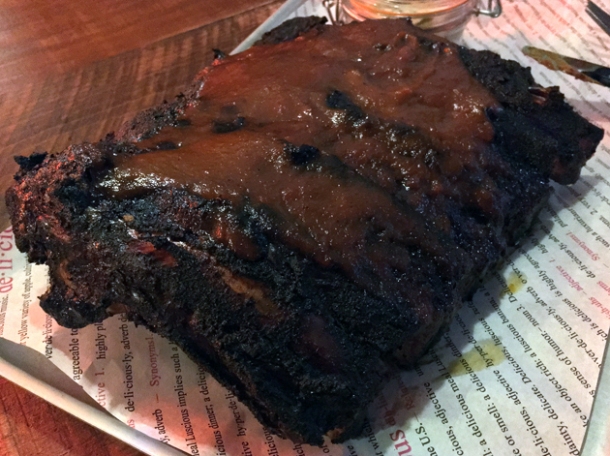 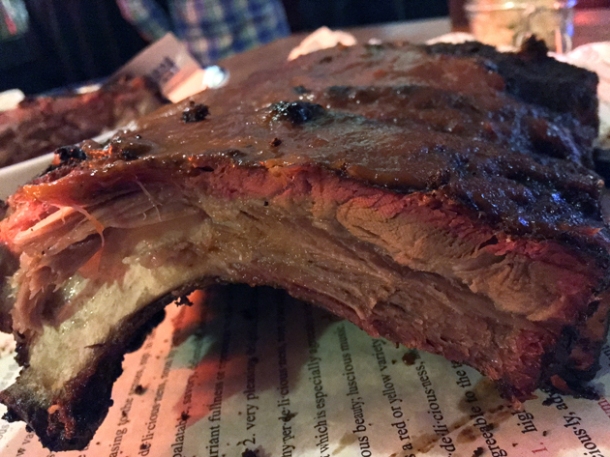 It’s a strange ‘red cabbage slaw’ that is entirely green with no red in it whatsoever. Lettuce and green cabbage in a sickly sweet mayo that was, remarkably, even more disgustingly disgraceful than the meat. 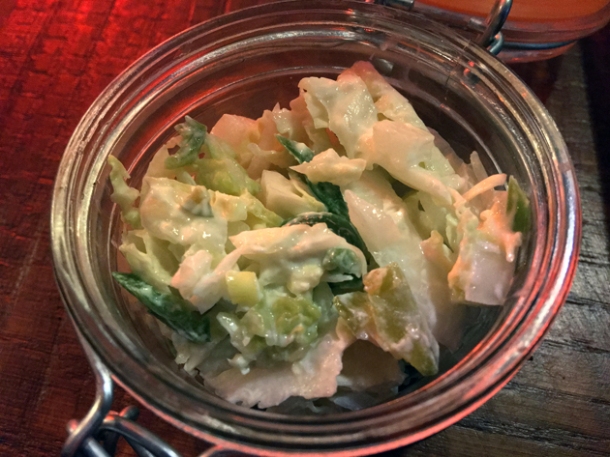 Pork ribs and pulled pork at Low Slow and Juke

A morbid sense of completionism brought me back to Low, Slow and Juke. Pulled pork was the one thing at the almost-as-awful Grillstock that was close to enjoyable, but I had no such luck here. The pulled pork was bizarrely served in a cheap hot dog bun and buried underneath an avalanche of lettuce, cabbage, sliced jalapenos and a sickly ejaculate probably intended to be a chipotle mayo. 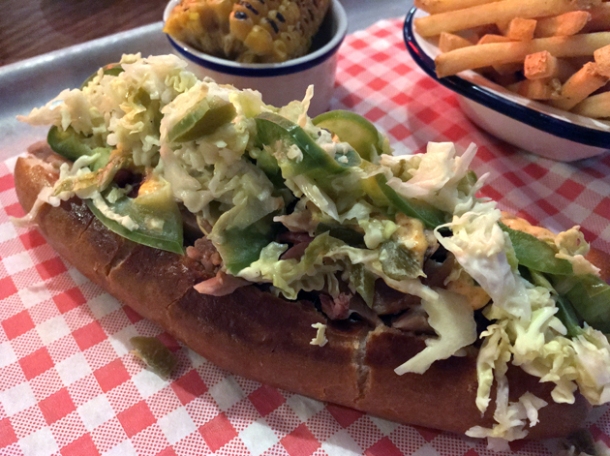 Scraping off the needless embellishments revealed bits of pork that were reasonably moist and firm, but they were bitty shreds, flecks and morsels rather than sinewy strands and chunks. Unsurprisingly, there was a complete absence of taste. No sweetness, saltiness, smokiness, fattiness. Nothing. Nothing but a grey void of hapless imitation and culinary debasement. 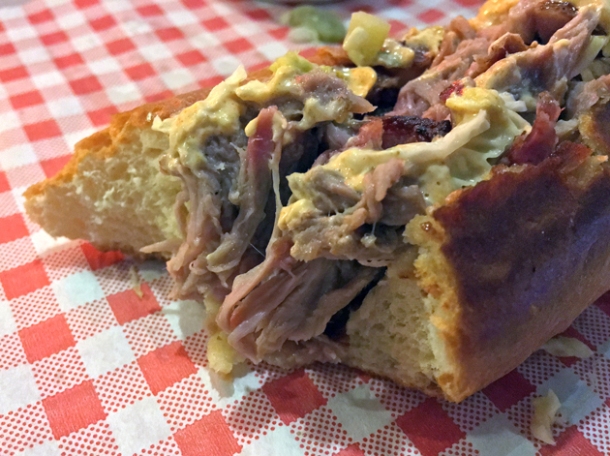 St Louis pork ribs are, as far as I can tell, nothing more than spare ribs trimmed for a neater presentation. You wouldn’t know that from the antithetical version here though – a huge slab of bone and flesh with the belly still attached. The bark was taut but, wait for it, bland. There was a thick layer of rendered fat, but this had been taken too far and had turned into a slick and sickly mess.

Although tender, the meat slid off the bone almost too easily – as if the ribs had been smoked for too long whereas every other dish tasted as if they hadn’t been smoked for long enough. Unsurprisingly, the rib meat itself was a blank slate for the lightly spiced tomato sauce. Such mundane nothingness is almost impressive given the excessive amount of fat swimming about. 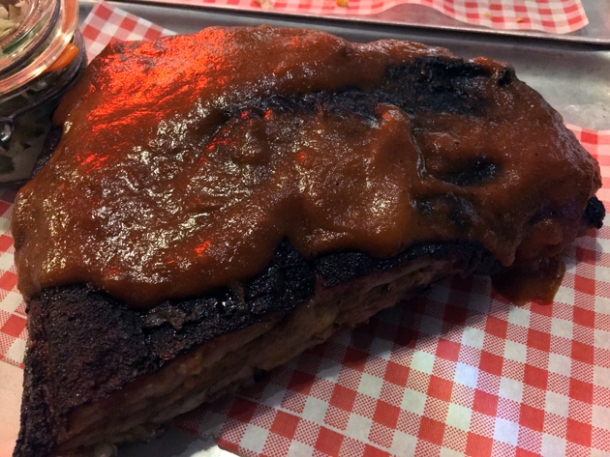 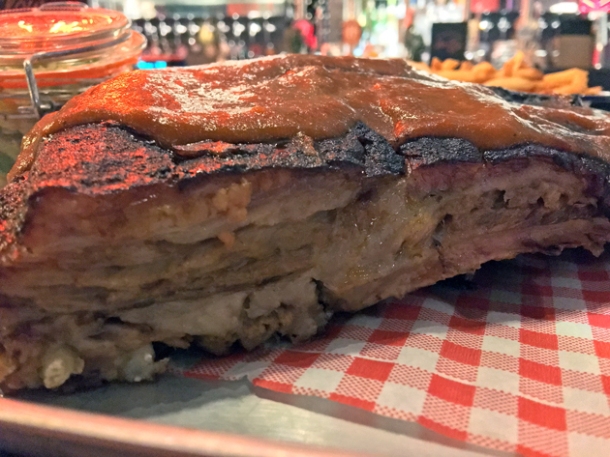 So unremittingly awful, I couldn’t finish it all. And I don’t usually like wasting food. But this was already a waste.

Green cabbage slaw was even less impressive than the alleged red variety – bog-standard cabbage in a limp Caesar-style dressing. I usually despise fries as a second-best alternative to proper chips, but they were very welcome here given the atrocious quality of the barbecued meat. Plus, the kitchen didn’t foul up the sweet and lightly buttered corn-on-the-cob.

Low, Slow and Juke is the most hideously awful barbecue restaurant I’ve had the misfortune to eat at. It smacks of opportunistic corporate bandwagon jumping with almost no understanding of what actually makes good or even passable barbecue.

I say ‘almost’ because I took the chance of peeking behind the door of the ‘smokehouse’ near the bar. Inside was an actual smoker (I had initially suspected that no actual smoking was taking place) that had recently been used – a Fast Eddy’s Cookshack FEC120 apparently fueled by Green Mountain Premium Texas Blend wood pellets judging from the opened sack. This should be enough to at least make passable barbecue, but the risible results suggest short order cooks dragooned into a discipline with next to no training. 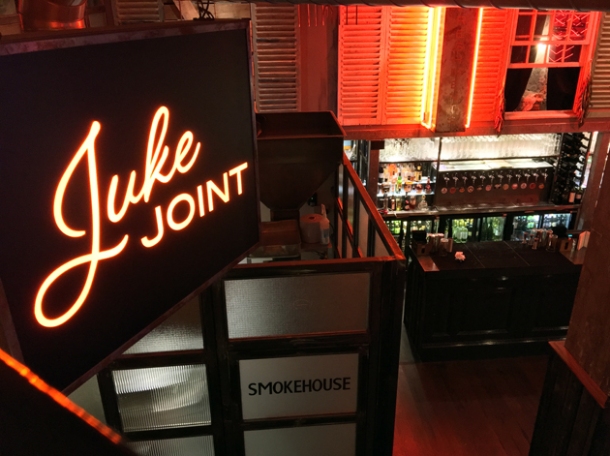 Surprisingly, there was an actual smoker inside.

Low, Slow and Juke may be cheap and centrally located, but the barbecue is inexcusably bad. Don’t eat here. Just don’t, not when there is now a selection of barbecue restaurants in London that are actually good. Eat at Red’s. Or Shotgun. Or Pitt Cue. Or Hotbox. Or the Covent Garden Big Easy. Or one of the high quality street food barbecue stands. If we’re lucky, this dismal, grubby stain of a restaurant will disappear like a bad dream.

Reservations: highly recommended the closer you get to the weekend (this hole is actually popular)

Average cost for one person including soft drinks: £20-25 approx.

4 thoughts on “Low, Slow and Juke review – the most hideously disgraceful BBQ in London”