But the embers are already flickering out

I’ve watched the growth and rise of Prairie Fire with interest and concern. Originally a street food stall with a stint at the original Mercato Metropolitano, this American barbecue restaurant has now found itself a permanent home in a former railway arch in White City across the road from the former BBC Television Centre. The fact that it has so far managed to outlast other, more high profile American(ish) barbecue eateries is notable – especially given the capital’s cutthroat restaurant market.

The state of Prairie Fire’s menu, on the other hand, is far less admirable. While London’s remaining barbecue restaurants have tended to hone their craft with skill and focus, Prairie Fire already showed signs of gradual stagnation during its time at Mercato Metropolitano. After having tried the core barbecue staples on the menu at Prairie Fire’s new west London restaurant, along with a few of their newer dishes, I’m frowning rather than glowing. 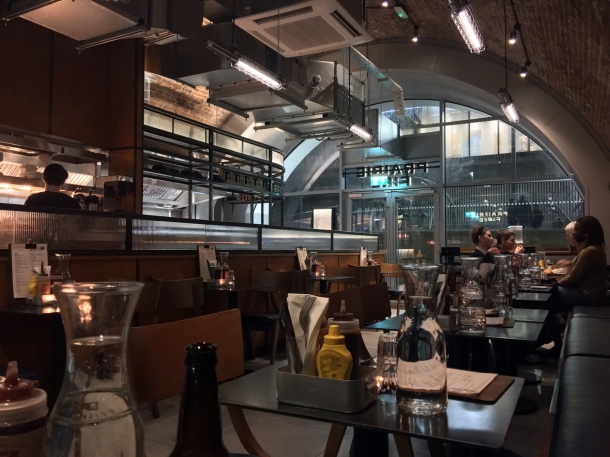 Westfield White City and its branch of John Lewis are within teabagging distance of Prairie Fire.

Prairie Fire’s brisket isn’t the worst I’ve had in London. But not only does it pale into comparison next to the genre-topping version available at Texas Joe’s, it’s also a pale shadow of its former incarnations. Whether taken on its own or as a taco filling, it had an oddly crumbly texture rather than smooth and meaty as with its London Bridge competitor. The brisket did have a mildly fruity bark, but there was never enough to go around. While not bone dry, it certainly wasn’t moist enough. The taco version suffered further from tortillas that did a startlingly accurate impression of leather and cardboard – two things I try not to put in my mouth. 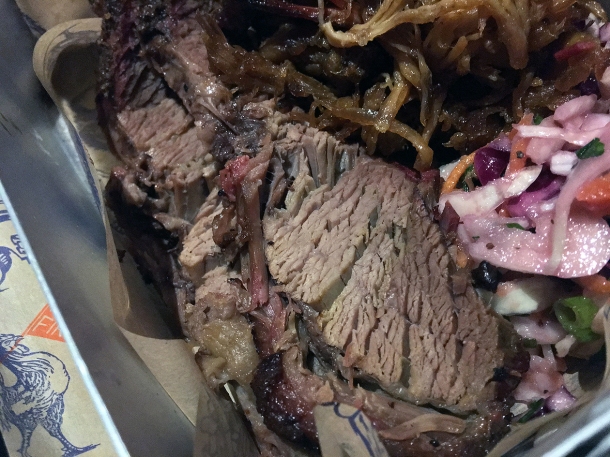 Well this is a sticky brisket. 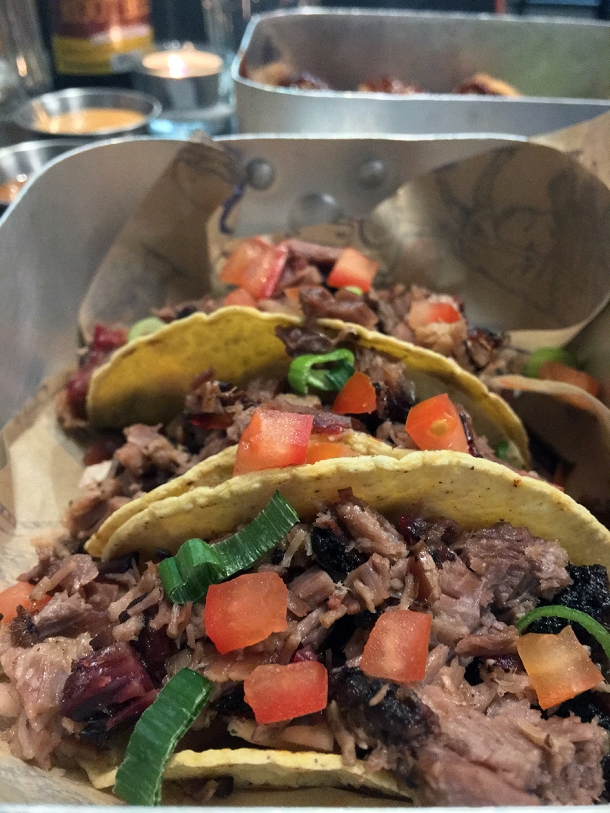 Almost everything comes in faux camping mess tins. As if that would fool anyone.

Pulled pork was reasonably moist and dense, with that merely satisfactory mouthfeel occasionally lifted by a transient smoky fruitiness. 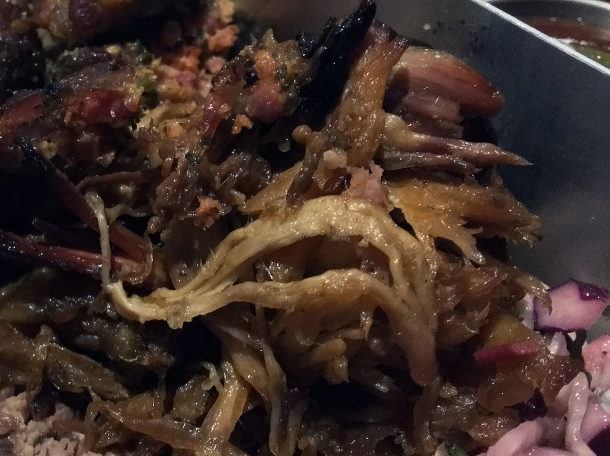 I’d be telling porkies if I said this was great. It was okay. Ish.

The most successful of the smoked meats was, ironically, the one that benefits least from the low and slow smoking that’s integral to true American-style barbecue. Slices of coarse and meaty sausage, dotted with mildly piquant hints of chilli, were by far the most accomplished of the meats in taste and texture. 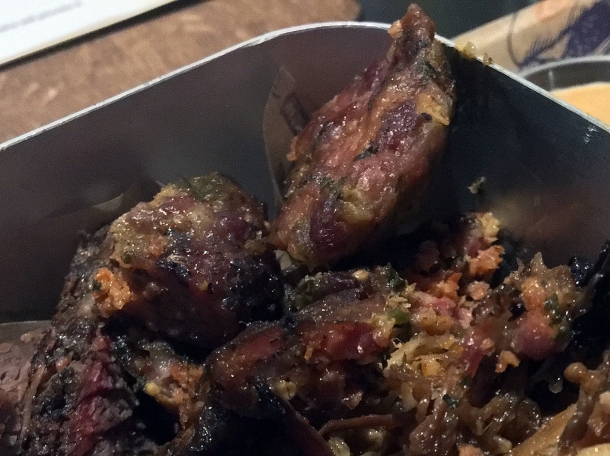 Apologies for the iffy photo, folks.

Prairie Fire doesn’t attempt to serve any further staples in the American barbecue canon, such as ribs or burnt ends. It instead opts for a litany of more populist dishes that have probably been calculated to have more appeal to people who aren’t barbecue aficionados and are probably also easier to prepare in the space available. The most obvious example is the ‘Signature’ burger which, like its predecessor at Mercato, feels like a misguided homage to the Big Mac from the flat veg and American cheese to the over-reliance on the sweetness of the burger sauce. The dual patties themselves had a bit more tang, chew and juice than the Mercato interation, but only relatively so – this was still an underwhelming burger that paled into comparison next to London’s best. 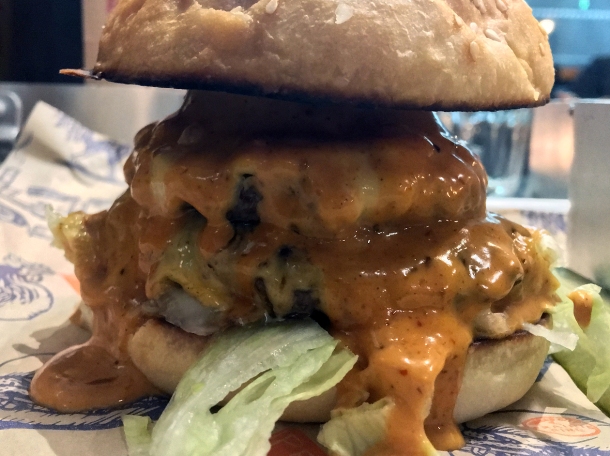 The onion rings, on the other hand, could duke it out with the best of ’em. The crisp batter was not only free from any excess grease or oil, but had a pleasing tang that complimented the sharpness of the onions underneath. The onions were also well-sweated with a moderate sweetness – a marked level of character noticeably missing from almost everything else I ate at Prairie Fire. 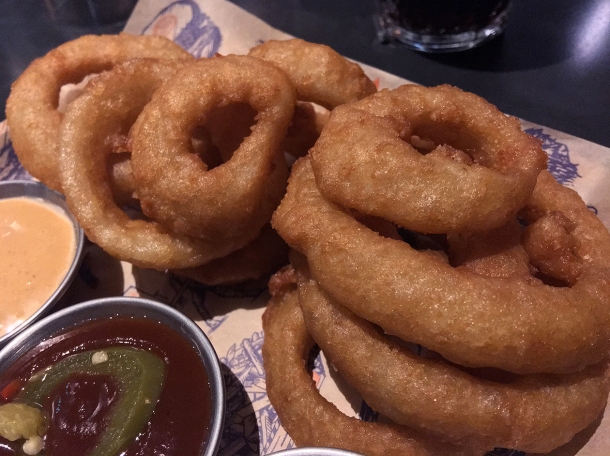 This review’s procrastination was brought to you, in part, by New Year’s.

Jackfruit ‘wings’ were really just vegetarian and vegan-friendly croquettes, but in 2020 London it’s still inexplicably obligatory to infantilise plant eaters with knock-off meat dishes. The crisp, fine-crumbed shells were the best part of these croquettes – the heavily minced jackfruit was more lifeless and snooze inducting than a selection of magazines in a GP’s waiting room. An edible and easily snapped starchy core nestled in the middle of each croquette acted as the ‘bone’ for these wings. That is, I have to admit, moderately clever – even if it does precious little to increase the resemblance of these croquettes to actual chicken wings. These jackfruit nuggets were deeply unconvincing, both in their own right and as imitation meat. 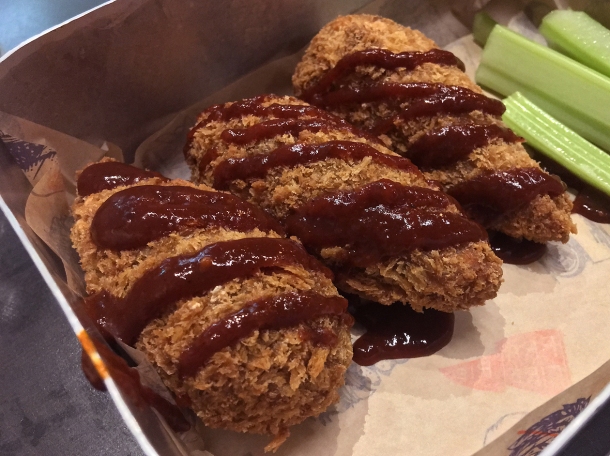 I still don’t see the appeal of jackfruit. Perhaps if I ate jackfruit with a glug of placebo… 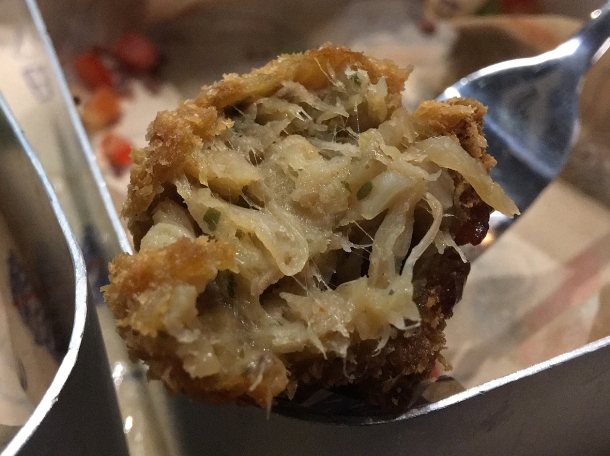 ‘Bone’ not quite visible.

Describing Prairie Fire as Fairly Dire wouldn’t be fair, but its barbecue did struggle to rise above the level of Bodean’s – the forever king of mediocre yet inexplicably popular BBQ in London. It’d be tempting to blame Prairie Fire’s timid performance on a populist desire, primed by their time at Mercato Metropolitano, to appease knownothings who think grilling burgers in their back gardens is the same thing as American barbecue. But the continued success of Texas Joe’s, which was packed on a recent Monday night revisit, shows that there is an appreciation on these shores for American barbecue done properly.

Whatever the reason for Prairie Fire’s slide in quality, it was even worse by the service which seemed to consist of the most disinterested and resentful part-time workers this side of a student union bar. Prairie Fire isn’t on fire, it’s petering out. West London deserves better barbecue than this.

What to order: Sausage; onion rings

What to skip: Brisket