Thanks to restaurants, I now detest the word ‘concept’. In restaurant management and public relations speak, ‘concept’ generally refers to the restaurant’s overall feel from cuisine and service style to atmosphere. Unfortunately, the word has now, in many cases, devolved to simply mean ‘gimmick’. Far too many restaurants and their public relations staff now fall over themselves banging on about their often nauseating, deeply superficial ‘concepts’.

The ‘concept’ at Red’s True Barbecue, a mini-chain from up North, should be simple enough – slow-smoked American-style barbecue served in a casual environment and with a bar attached too. But someone insisted on draping a faux-religious theme around the menu and website. The leather-bound menu is ‘The Good Book’ and is actually embossed with an imitation crucifix. The founders went on a ‘pilgrimage’. Opening hours are ‘hours of worship’. Restaurant addresses are ‘places of worship’. Even if I wasn’t an agnostic cosmopolitan elitist, this sort of rampant bollocks would still induce such violent eye-rolling that I would go blind.

Crack open ‘The Good Book’ (sorry, I had to suppress the urge to vomit violently), and the menu is needlessly complex. At its heart, it’s ribs, pulled pork, beef brisket. There are, of course, sides, desserts and a few starters too. But there are also, for some reason, burgers and steak. But the haphazardly designed menu muddies the waters with endless exposition and repetition – ‘plates’, ‘combos’, ‘feasts’ – and enough annoyingly eye-catching fonts to send a graphic designer to an early grave.

Thankfully, it’s all worthwhile as the barbecue is actually pretty good.

To be fair, the religious theme is barely present in the restaurant itself. The faded grandeur of the ground floor is reminscient of Wilton’s Music Hall.

Grease proof paper, metal trays and enamelled tubs. The knee-jerk part of the We Want Plates crowd will foam at the mouth.

Ignore the bulk of the waffling menu and stick to pages 5 and 6. 200g of pulled pork is a good place to start. Although my serving lacked the firmness I usually prefer, the vinegary wet rub was nonetheless pleasing as was the occasional seam of unctous fat. It’s easily one of London’s best pulled porks. 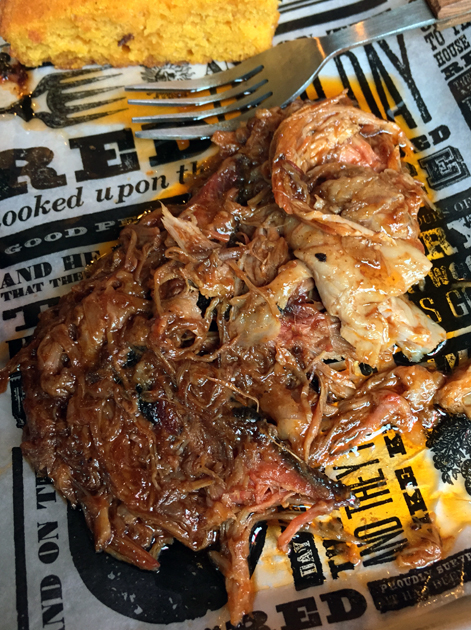 The half rack of pork spare ribs was surprisingly large – big enough that I couldn’t quite finish all of it (worry not, take away cartons are available). Despite appearances, there wasn’t much in the way of bark. There was plenty of fat and meat on each rib bone though.  Although the tender, lightly smoky swine flesh was moist, it lacked depth of flavour which might have you reaching for the table sauces which a truly great spare rib shouldn’t need. These spare ribs were by no means bad, but I’ve had better so I had few qualms about not quite finishing my entire portion.

I’d have this as my desktop wallpaper, except it would make me hungry all the bastard time.

I had few qualms about the burnt ends though. These little beef nibblets were tender, occasionally chewy, and laced with sporadic hits of peppery heat. Such top notch burnt ends are all the more notable given how rare this dish is in London. 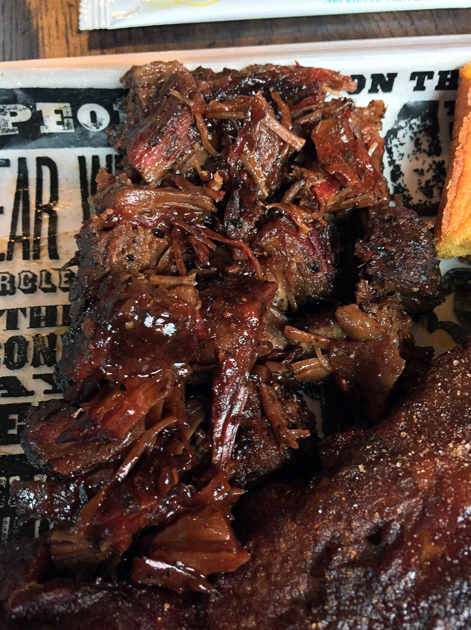 The cornbread shouldn’t be overlooked. Light with a pillowy fluffiness and very little in loose crumb, the sweet nuttiness was subtle but nonetheless very satisfying. If there’s better cornbread in the capital, then I’ve yet to find it. 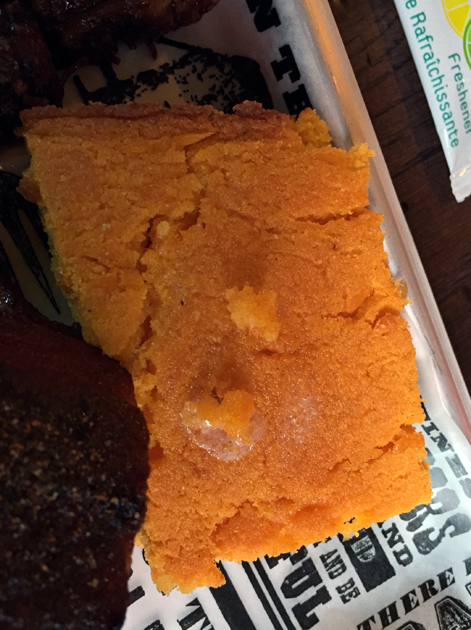 Dining companion Snaggletooth had never before experienced the joys of proper barbecued beef brisket and the version at Red’s turned out to be a sterling way to break his brisket cherry. The supple and peppery bark gave way to reveal moist, smoky, tender strips of beef riven with fatty reservoirs of unctuousness. Although it didn’t quite have the salty, moreish depths of flavour found in the very best US briskets, it’s so good that it surpasses some stiff competition to become my favourite barbecue beef brisket within the M25.

Up until this point, pickles were missing from the barbecued meats served at Red’s. Good pickles are essential for cutting through all the rich fattiness.

The beef short rib had a peppery bark similar to that found on the brisket, but was noticeably tougher and thus aptly earning its name. Biting my way through it wasn’t too much of a chore though. The cow flesh underneath was noticeably smoky and tender, but it wasn’t moist or fatty enough. The relative dryness of the meat was compounded by its relative blandness compared to the best barbecue beef short ribs as well as the paucity of collagen on the bone. It’s not bad, but it was a disappointment following the superb brisket. You can do better.

Bodean’s is the deceiver. The adversary.

Surprisingly, the pork baby back ribs turned out to be the best of Red’s rib dishes, surpassing both the beef short rib and the pork spare ribs – and I tend to prefer spare ribs over baby backs. Although each rib didn’t have much meat on it, the swine flesh that was present was moist and tender with a subtle smokiness neatly complimented by the fruity wet rub basted on top.

Although the menu promises beans peppered with burnt ends and pulled pork, in our case the meat was barely present. That hardly mattered though, as the moderately soft beans had a sweet, smoky tang that was quite beguiling. The ‘frickles’, or deep fried pickles, weren’t quite as accomplished. Although each slice of pickle was moist and tart, the enveloping batter was too oily for my liking. 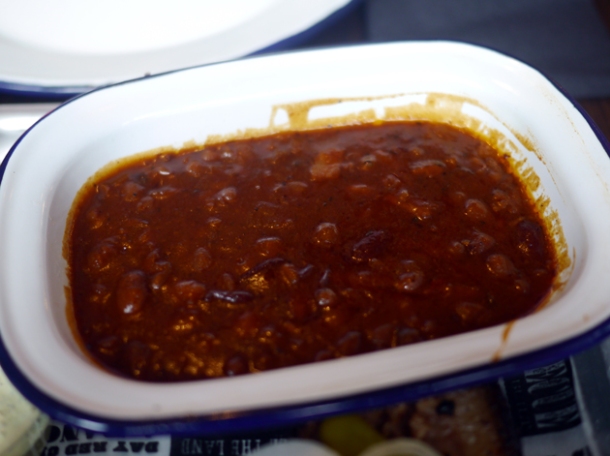 Snaggletooth loves cobbler, but we both had serious reservations about Red’s version. The biscuit crumb topping was surprisingly sparse, while the chunks of peach underneath were so bland that they might have been apple for all we knew. The accompanying ice cream wasn’t up to much. The only saving grace here was the strong, unmistakably syrupy, nutty taste of maple pecan.

Give me an enamelled tin full of straight-up maple pecan pudding and I’d be a happy bunny.

My own pudding of chocolate cheesecake was an inconsequential affair. The lightly gooey upper layers were inoffensive and forgettable. At least the biscuit base was pleasing – malty, crunchy and tightly crumbed.

One of Red’s most outrageously eye-catching dishes is the Doughnut (or Donut) Burger. It’s exactly what it sounds like – a burger with halved doughnut slices for buns instead of bread. I dreaded shoving this gimmicky-sounding sandwich down my mouth, especially given Red’s is supposed to be a barbecue specialist and not a burger restaurant, but I endeavoured to keep an open mind.

It soon become clear, however, that the doughnut schtick was there to draw attention away from the dreary beef patties. Although not totally lacking in character – they did have a surprising and pleasing offaly quality – the coarse grind of the beef was too bitty. They were cooked well-done, so lacked depth of character and were also far too dry. The moisture came instead from the tasteless American cheese and the burger sauce. Although the sweetness of both the sauce and the soft, sugary ring doughnut halves wasn’t too overpowering, it did detract from the woody smokiness of the bacon. The cured swine flesh had its own problems to deal with – aside from being a streaky rather than a back cut, its crispiness just didn’t suit the woody smokiness.

To top it all off, this burger was gloopy, dripping mess. If you’re superficial enough to be impressed by food that looks sloppy, filthy and decadent for the sake of it, but is deeply lacking in any substance, then this shallow piece of idiotic food bling will be right up your braggart street. 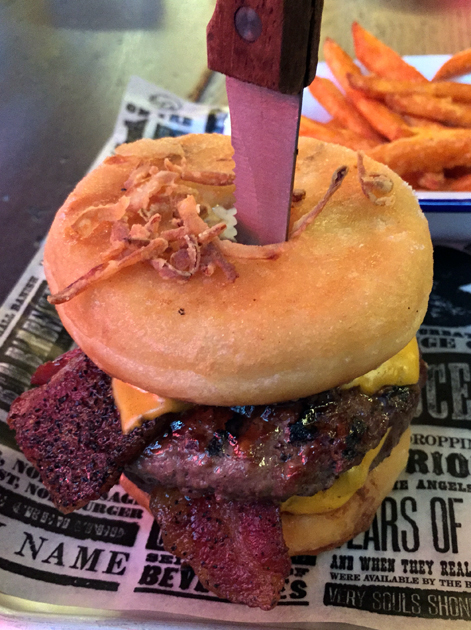 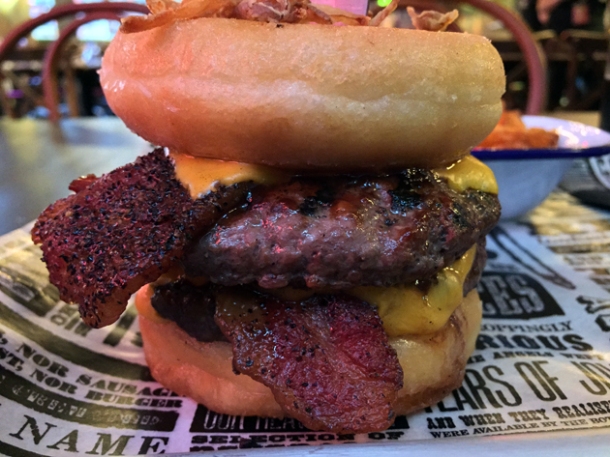 The jalapeño wrapped in streaky bacon accompanying the burger was moderately spicy. The sweet potato fries were crisp and free from excess oil, but had only a very muted sweetness.

I think that bacon-wrapped jalapeño to the side is winking at me.

The lacklustre taste of the sweet potato fries was all the more surprising given the far better state of the sweet potato pie. The filling had the requisite creamy sweet pumpkin-like flavour, while the tightly crumbed base was just the right side of crunchy. The melted marshmallow topping added some sticky sweetness that wasn’t really necessary, but was inoffensive. 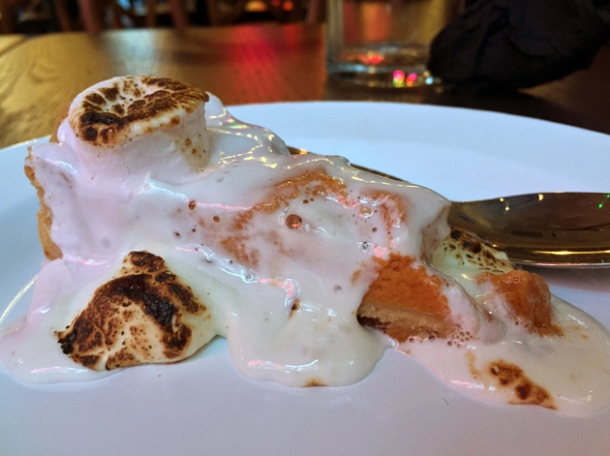 God-forsakingly irritating menu and religious shtick aside, it’s entirely possible to have a great time at Red’s True Barbecue. This is only true if you stick to the actual barbecued dishes though. The sides and desserts are much more mixed and if you’re daft enough to order an awful gimmick burger at a barbecue restaurant after having been forewarned, then you can get in the sea. Stick to the slow and low smoked barbecue. Not all of it is perfect, but when it hits the spot it washes away all of Red’s tawdry mistakes.

What to skip: Donut burger

Reservations: only taken for groups of 8+ Monday noon – Thursday midnight

Average cost for one person including soft drinks and service: £35-40 approx.