London Bridge has never had it so good

There are many injustices in London’s restaurant scene (I’m still hurting after the closure of Rex and Mariano), but few things annoy me more than unworthy barbecue restaurants. The likes of Porky’s, Bodean’s and Red Dog Saloon have been opening up new branches across the city, despite serving up food that ranges from dreary to mediocre (although they could be worse – a lot worse). There is some justice in this world though – Texas Joe’s, Dragon’s Den veteran and purveyor of beef jerky, has finally settled down in a restaurant a short walk from London Bridge station behind the Guy’s Hospital complex.

I’ve covered Texas Joe’s before, in its short-lived street food incarnation before it moved indoors at various residencies. Although some readers wrote in to complain about the uneven quality of the barbecue at the Texas Joe’s residencies, my meals there were always spot-on. I’m happy to report that the new Texas Joe’s is even better than it was before.

Beef at the new Texas Joe’s

Brisket has always been the signature dish at Texas Joe’s and for good reason. Even with the recent boom in London’s barbecue restaurants, high-quality smoked brisket remains in short supply in the capital. Like London’s other superlative barbecue restaurant, Texas Joe’s hasn’t sat on its laurels – its brisket is even better than it was before. Moist and tender, it was on the verge falling apart as it rested on my fork due to the expertly rendered muscle and fat. It didn’t rely on mouthfeel alone to win me over – a woody bark and a small strip of succulent fat tinged with smoke added extra depths. A second serving a week later was just as good. This. This alone sets the standard for smoked brisket in London. 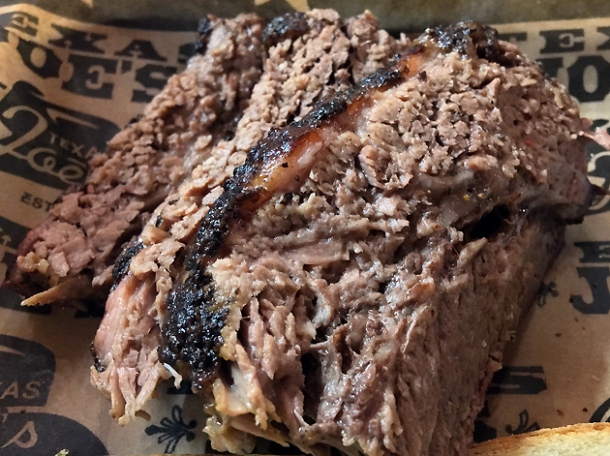 One of my visits coincided with the press dinner. I wonder how many of the subsequent reviews declared their freebie.

The same high quality brisket turns up in the brisket tacos, but it’s hard to appreciate the beef here amongst the coleslaw, pickles and creamy cheese. Texas Joe’s other tacos are, for the most part, surprisingly good. Apart from this one.

If there’s one thing more remarkable than the gelatinous, quiveringly soft and utterly slurp-able nature of Texas Joe’s bone marrow, it’s the sheer quantity that you get. Compared to the equivalent dish at, say, St John, it’s a noticeably more generous helping.

The beef short rib came close to toppling the brisket from the top of my affections. Exceptionally beefy hunks of tender meat-on-the-bone were lightly sticky thanks to expertly rendered fat and connective tissue. It was topped with woody, gently chewy bark. Technically accomplished and sensually excellent, it’s one of the best versions of a smoked beef short rib that I’ve seen on this side of the Atlantic. 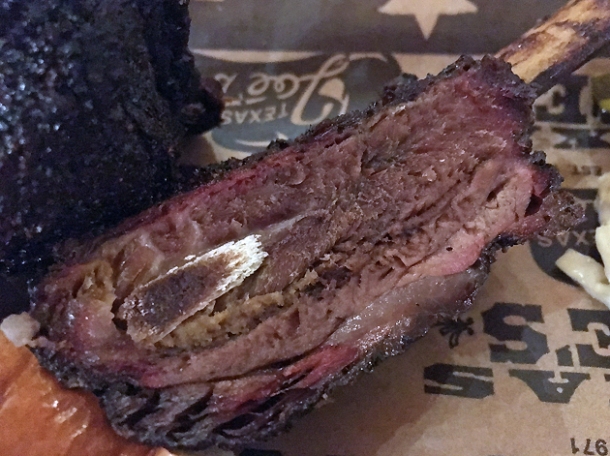 App idea: Tinder/Grindr, but only for people who love proper barbecue.

Jacob’s sadder at all the awful/mediocre beef ribs out there. Come to Texas Joe’s instead.

Beef gets all the glory and attention in Texas-style barbecue, but Texas Joe’s pork dishes shouldn’t be ignored. The meat on the spare ribs was tender and loose enough that there was no need for a knife. It slid off the bone with such seductive ease, that it should’ve been cited for public indecency. The supple bark was subtly woody and moreish, while the exceptionally tender rib meat was slick with rendered fat – the occasional seam and chunk of extant fat added more unctuous joy. It was a truly spectacular display of the smoky arts.

Spare a thought for the people who’ve never had barbecue as good as this.

Pork. The other white meat.

Pork tacos were filled with firm, lightly seasoned chunks of shoulder meat. Although only modestly porky and slightly dry, the coleslaw and pickles made up for the relative lack of moisture while the creamy cheese bits were surprisingly complimentary to the pork. The tortillas were made out of wheat flour rather than corn, but their bigger size was necessary for the volume of contents and – I can’t really believe I’m writing this – the nuttiness of the corn flour wasn’t really missed here. 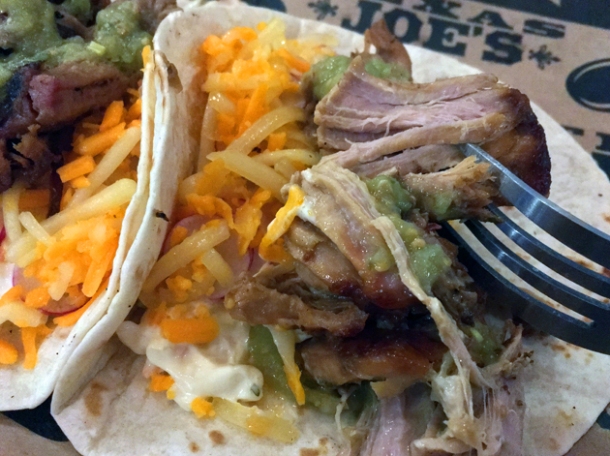 Neatly sidestepping the cliche that pulled pork has become thanks to shit pubs and Tesco.

Pork belly is rarely seen on the menus of London’s American barbecue restaurants. When it does appear, it’s often an embarrassing mess. Texas Joe’s pork belly is a stinging rebuke to such ineptitude. The sumptuous amount of fat was viscerally salty and richly full-bodied in its unctuousness, but there was also a meaty helping of tender, honkingly well-lived white meat as well as taut, chewy and glossy crackling-like skin. I love it. No, that’s not right. I lust after it.

I’ve never seen mutton on any barbecue menu in London before. While served at some barbecue places in Kentucky and allegedly a little known part of Texas cue, its presence here in taco form feels more like a tip of the stetson to Ye Olde England. Dense and meaty chunks of mutton shoulder weren’t quite as earthily funky as I expected, thereby increasing its resemblance to lamb. Even so, it was enjoyable on its own terms and meshed surprisingly well with the coleslaw, pickles and cheese that rounded out the fillings of these tacos. 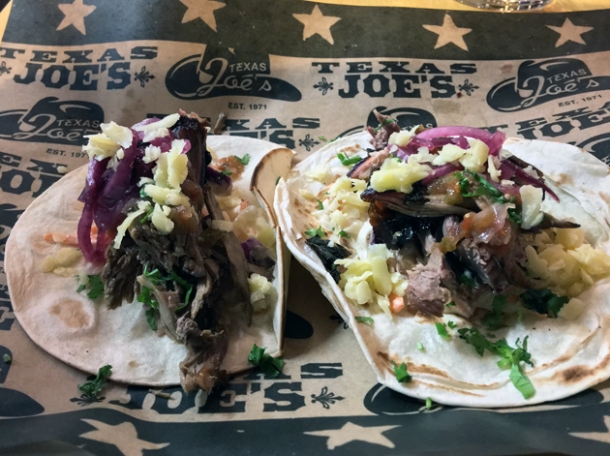 Lunch or a starter? Or both?

Someone has to shoulder the burden.

If you’re vacuous enough to be easily impressed by the size of ribs, regardless of their actual quality, then you’ll be dim enough to overlook or be disappointed in the mutton ribs. Although the layer of meat and fat on the bone was thin, it was viscerally earthy, streaked with gelatinous, unctuous fat and supple, subtly sweet bark. Spot on.

One of the rare occasions where I wish I could change the autofocus point after the picture has been taken.

A handful of my dining companions cling to a misinformed fondness for Bodean’s. Thankfully, the Jolly Giant is no longer one of them following our 2018 visit to Texas Joe’s. Pork spare ribs, neatly trimmed in a St Louis-style cut, had a dense peppery bark layered on top of tender, moist meat. While undoubtedly delightful, it wasn’t as sumptuously multilayered as previous cuts of pork spare ribs at Texas Joe’s. The sweet, sharp and vinegary sauce on the side turned out to be more of a necessity than it should’ve been.

This bark wags my tail.

The beef short rib was a far better rib dish and one that managed to make the Jolly Giant writhe uncontrollably in pleasure. The dense peppery bark was similar to the one topping the pork ribs. That’s where the similarities ended, though. Tender, glistening layers of earthy beef intermittently alternated with unctuous seams of neatly rendered fat and connective tissue. While tangy, treacly sauce was provided on the side, it was hardly needed. The beef short rib wasn’t as good as it had been before – it was even better.

A short rib that’s not short on sumptuousness.

‘Computer, zoom and enhance.’
Wait, no. That’s not how computers work.

Our favourite meat of this meal had to be the beef brisket though. A knife almost wasn’t necessary for slicing – it was that tender. Despite its exquisitely soft texture, every sinew and band of muscle could be made out just before it dissolved in the mouth. Almost every mouthful was equal parts unctuousness, pepperiness and beefy tang. There is no finer barbecued beef brisket in London. This dish, along with the beef short rib, easily allow Texas Joe’s to hold on to its title of best American-style barbecue in the capital. 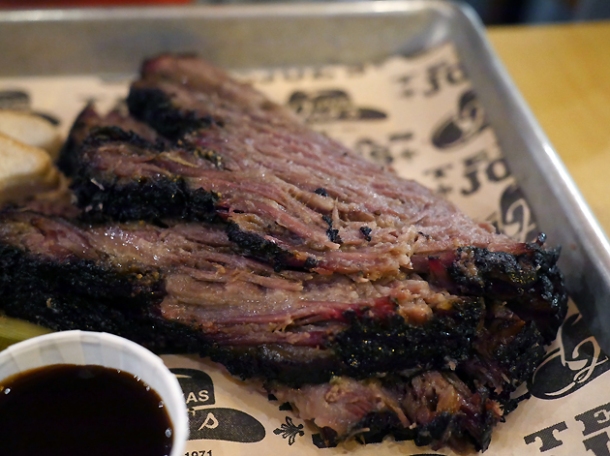 All of the meats come with sharp, tart pickles and a coleslaw that thankfully managed to avoid being heavy and cloying. The slices of Texas toast loaf (or thick white bread to you and me) is best avoided to save room for the cornbread. Although a tad too dry, it was still pleasing thanks to dense crumb and reasonable nuttiness. A slightly larger helping of the piquant butter would go a long way though.

This updated review’s procrastination was brought to you, in part, by Outkast.

Texas Joe’s Smoked Meat is an oddly located restaurant, situated on a leafy, mostly residential street that’s seven minutes and a million miles away from the shiny glass of the Shard and the hubbub of London Bridge and Bermondsey. For this reason alone, it may never achieve the popularity and synonymic ubiquity of Bodean’s. But it should. It sits in the top-flight of London’s barbecue restaurants alongside the new Pitt Cue, Shotgun and Hot Box, yet, at the same time, its Texan focus and skill means it’s also in a class of its own. I love it. If you don’t, then we really can’t be friends anymore.

What to avoid: Brisket tacos