Seafood, like many things in life, is subject to the cyclical, ever-changing whims of fashion and finance. Although the details often depend on the specific seafood in question, seafood has – throughout the long history of these islands – gone from the food of the rich to that of the poor and back again depending on the culture and wealth of the times. It’s telling that many of London’s recent batch of new seafood restaurants has been aimed squarely at those with plenty of money to spare. Those that aim to bring seafood to as wide an audience as possible have closed, had to raise their prices or have been of derisory quality (Rex and Mariano, the Burger and Lobster chain and most of London’s poke restaurants respectively).

Siren is unapologetically a restaurant for the well-to-do. If the prices weren’t a dead giveaway, then its location nestled in the back of The Goring hotel in Belgravia most certainly is. The Goring has been a thick-piled, gilded haunt for the upper crust over the past century or so. Siren’s main dining area is essentially a gussied-up conservatory, but it is a well-appointed gussied-up conservatory with plushly upholstered chairs, a chandelier stylised to look like a lobster cage (complete with glass lobsters) and a view over an immaculately manicured lawn. As expected in a retreat for the double-barrelled surname crowd, the service was – for the most part – not only smoothly efficient, but far better-dressed and more chisel-accented than I’ll ever be.

Even the occasional aloof staff member – including one doing a spot-on impersonation of Toby Stephens and his sneer in Die Another Day – couldn’t derail the experience at Siren. That unfortunate role was reserved for the food.

Warm crusty bread wouldn’t have been anywhere as enjoyable without spreading each slice with a mixture of the whipped cod roe and the seaweed-flecked butter. Each spread was enjoyable enough in its own right, but combining the two unleashed a delectable umami wave. 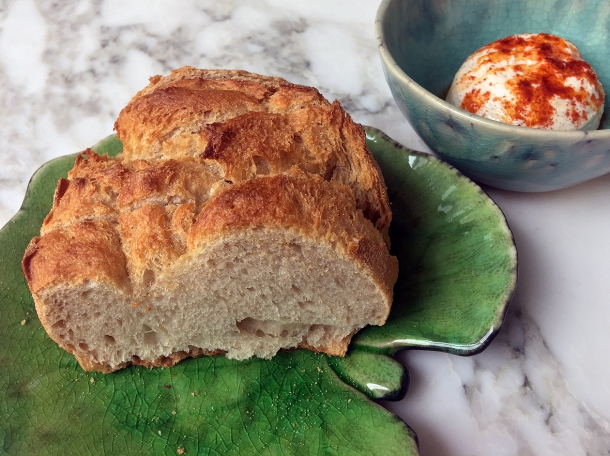 Hanging out with the upper crust.

But I know which side my bread is buttered on.

Dooncastle oysters had a briney start, leading to a mild creaminess and finishing with a salty aftertaste. While far from bad, they ultimately weren’t as sensually well-balanced as the oysters often available from Pescheria Assunta.

These are farmed oysters, apparently.

Black pudding studded with bits of cuttlefish needed more resting time. Even if its serving temperature had been right from the very beginning, this was still ultimately nothing more than a somewhat fishier than normal black pudding. Even by the standards of other purely pork- and grain-based black puddings, it wasn’t even especially rich or satisfying.

Meaty yet tender and milky scallops contrasted well with a topping of crisp and crunchy fine-grained breadcrumbs. I was unconvinced by the suitability of the the zesty, buttery dressing though, its qualities clashing with the scallops’ textural charms. 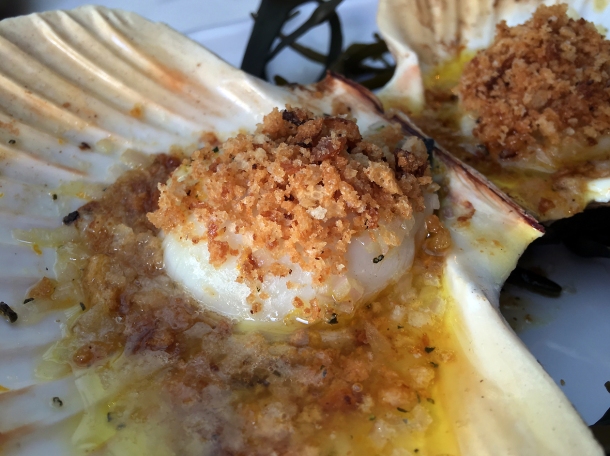 Some parts of the dining room have surprisingly iffy mobile reception.

Meaty slices of cured monkfish came in a sweet, herby brine topped with crisp spring onions and what appeared to be small dollops of milky creme fraiche. While enjoyable enough its own right, devoting menu space to just one cured fish dish and then turning out something so cosseting and undemanding seems like a missed opportunity.

It’s pretty though, I’ll give it that.

Kangaroo Face’s mackerel was light and meaty, served with crisp tomatoes and a tart sauce. Unfortunately, its textural charms were undermined by the surprising absence of the bold taste that usually characterises mackerel. 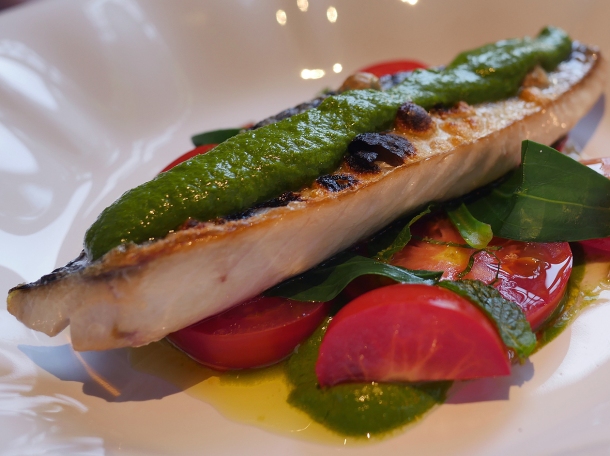 Imagine if Siren was one of those Hong Kong-style seafood restaurants where you sidle up to a tank and point out the swimmer you want. That would be a giggle in an ornate Belgravia hotel.

Small-to-medium grained rice formed the bulk of Siren’s crab risotto. Loosely held together by a faded, apologetic sauce and dotted with tame crab verging on mushiness, it had all the panache and verve of baby food. 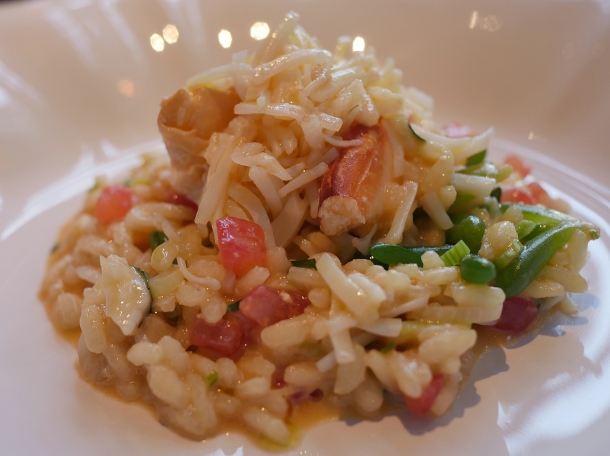 The ‘fisherman’s stew’ was effectively Siren’s version of bouillabaisse with the soup/broth tilted heavily in favour of tomatoes rather than a more bisque-like form. I personally would’ve preferred the latter, but the tomato-derived umami was pleasant enough in its own right. While crunchy, the battered fried oysters were the least enjoyable swimmers here. Just-cooked calamari, briney mussels and meaty hunks of what was almost certainly turbot were far more winsome. Crispbreads and sweet rouille rounded out a somewhat uneven, but still nonetheless enjoyable fish stew.

Stewing away in the summer heat.

This review’s procrastination was brought to you, in part, by Sigrid.

Siren’s take on fish and chips doesn’t come with any chips. Even so, the battered and deep-fried turbot was a wonder to behold if only because of the remarkable battered carapace. It was surprisingly and consistently even in its wafer-like thinness, golden hue and crisp crunch. That made it all the more saddening that its crunch obscured the meaty milkiness of the turbot. The two were best enjoyed separately, with the batter used to mop up the caper-strewn tartare sauce.

I was startled to learn from one of the French-speaking staff that the French for ‘fish and chips’ is apparently ‘fish et chips’.

Even if the dover sole hadn’t teetered on the precipice of being overcooked, the clotted cream sauce did it no favours. While suitably thick and rich in its own right, the sauce became a curious non-entity when taken with the fish itself – something which not even the cockles and clams could remedy. Hake was a far better main, with its tender, meaty and moist flakes.

Side dishes at Siren

Although the honey mustard dressing gracing the salad of bitter leaves was a muted affair, that was actually advantageous. This made the salad all the better as a refreshing counterpoint to the heavier mains such as the battered turbot.

Although the onions in the tomato and shallot salad were nothing to write home about, this was still a enjoyable side thanks to the tomatoes. Ranging from sweet to sharp and then to umami, the assorted, differently hued fruits were a pleasure to devour.

50 shades of red and green.

The tomato and shallot salad was much the same on a subsequent visit.

‘Crispy potatoes’ sat somewhere in between chips and potato wedges in terms of thickness. While reasonably crunchy on the inside, they didn’t follow through with a fluffy enough interior while the garlic and parsley sauce was a non-event. A damp squib of a side dish, ultimately. 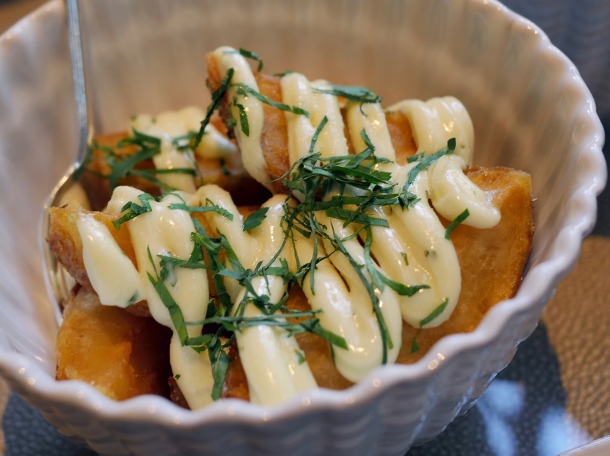 Although Siren’s brownie looks like a mere slip of a dessert at first glance, it proved to be unexpectedly winsome. The rich bittersweetness of the gooey, dense strip was neatly offset by the nutty crunch and sugary sweetness of candied macadamias and walnuts. Willowy double cream and viscous butterscotch were hardly needed, but they didn’t detract from this dreamy dessert either. 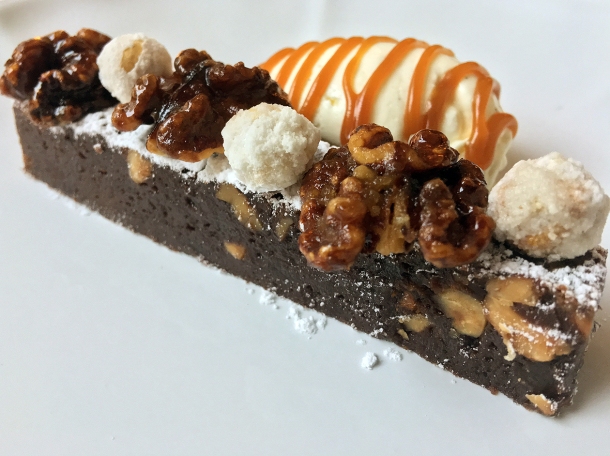 Gooseberries have been making a slow comeback to public life and this Cambridge burnt cream (or creme brulee to you and me) is a good a way as any to sample its charms. The fruit felt somewhat tacked on with its kiwi-esque sharp sweetness not really complimenting either the crisp mantle of the pudding nor the eggy, custard reservoir underneath. This was even more true once the gooseberry ice cream – which aptly captured the qualities of the fruit – and the buttery sweet shortbread were thrown into the mix. Still, each element was a delight in of themselves even if they didn’t quite come together as a coherent whole. 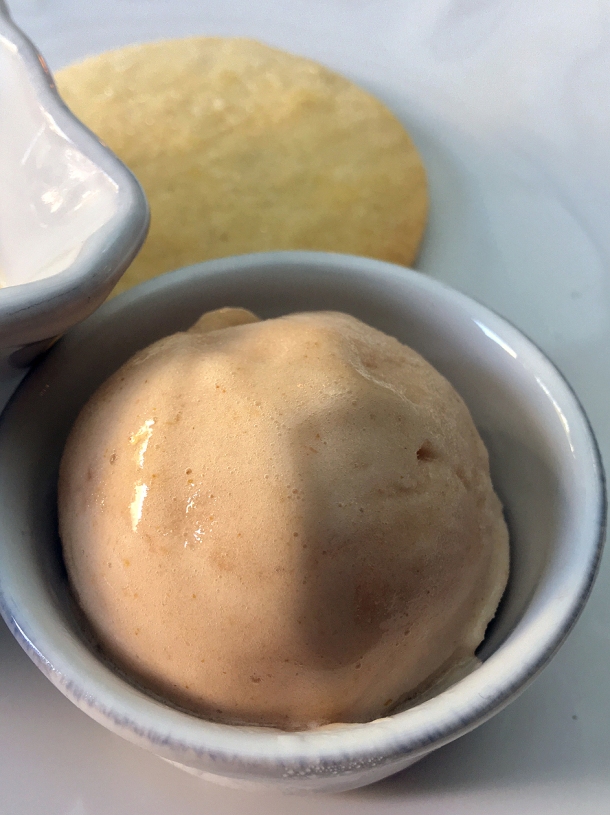 Kangaroo Face’s strawberry tart used filo rather than shortcrust pastry, but wasn’t worse for it. The delicately crisp pastry proved surprisingly complimentary, emphasising the lightness of the finely chopped fruit and what appeared to a delicately refreshing yoghurt sorbet. 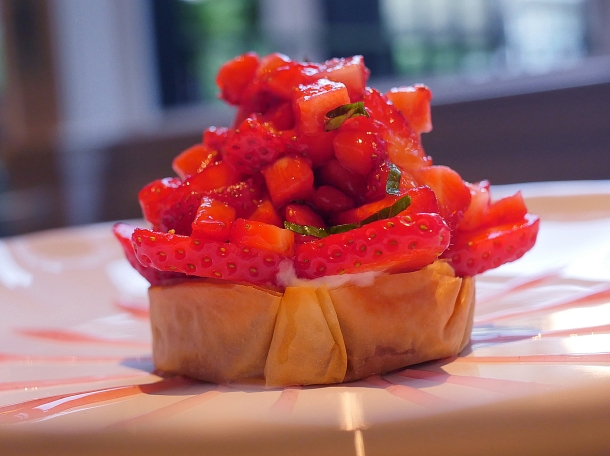 Turns out I wasn’t the only fruity tart in this hotel.

I was unmoved by almost every aspect of the raspberry choux bun from the so-so pastry to the surprisingly subdued fruit and cream lurking inside, as well as the yawn-inducing chocolate sauce on the side. The accompanying sorbet, on the other hand, was far more bewitching with its smoothness, bracing refreshment and sharp sweetness that was truer to the fruit than the actual fruit used in the bun.

I wouldn’t choux this dessert again.

It’s almost certain that copious amounts of time, money and other resources have been lavished on Siren, but that only makes its underwhelming food all the more disappointing. Siren’s attempts at cleverish cooking with a twist, such as the cured monkfish or the battered turbot, often felt far too tame and apologetically reserved or unbalanced and in need of refinement. Its more traditional dishes, such as the dover sole or the risotto, were often leaden and grey. There’s some joy to be had here – especially with the desserts – but the bright spots were often few and far between.

Seafood at its best is a bold, visceral joy that couldn’t be mistaken for any other foodstuff. At Siren, for the most part, it felt like just another ingredient in restrained dishes that were calculated to be as inoffensive as possible. In some other seafood restaurants that aren’t as gilded and well-funded as Siren, necessity, scarcity and doing just a few things well can become the midwives of delicious inventiveness and verve. Siren would do well to learn from their example.

Name: Siren at The Goring

Average cost for one person including soft drinks: £80-100 approx.