I had eaten my fill, but I was not satisfied. As the hapless staff flailed at even the most basic tasks, the feeling started to drain from my numbed backside and legs from sitting for so long, while my phone – my only bulwark against an ever-increasing tide of boredom – came perilously close to losing the last of its battery charge. Pescheria Assunta is many things, but it is most definitely not a smooth dining experience.

The mostly friendly, but woefully slow and haphazard service at Pescheria Assunta is all the more surprising given that this restaurant originally opened in Mayfair a few years ago, before moving to its current Earl’s Court location. Either the staff were always this inept at basic tasks such as remembering what I’d ordered, clearing tables and fetching the bill or the Earl’s Court version of Assunta has a completely new front of house team from its Mayfair incarnation.

Perhaps more interestingly, Pescheria Assunta is the London outpost of a thalassic restaurant empire that started with Rome’s Assunta Madre. The head of it all is Gianni ‘Johnny’ Micalusi who was arrested in 2017 due to allegations of money laundering. Micalusi is no longer in custody, judging from his social media posts, having attended the opening of Pescheria Assunta. But it’s not at all clear if Micalusi has been released without charge, is still under investigation, has struck a plea bargain or something else entirely. Neither Micalusi nor Italy’s Guardia di Finanza (which apparently made the arrest as part of the multiagency Direzione Investigativa Antimafia) responded to questions about his current legal status.

Having only learned about all this after eating at Pescheria Assunta several times, I’m left in something of a quandary about how to review this seafood restaurant. On the one hand, I have little sympathy for restauranteurs that cross the lines of civilised behaviour – especially in an age where many will bend over backwards to excuse or ignore such behaviour. But on the other hand, Micalusi is innocent until proven guilty – at least from a common law perspective.

So there’s only one thing for it. To pepper my review with glib jokes and to caption my photos with allusions to – and lines from – classic films about organised crime. But not Italian/Italian-American mafia films, since I don’t stoop to crude ethnic stereotypes unlike some restaurant reviewers.

If you only have one thing at Pescheria Assunta, then make it the red prawns served raw. Plump and lightly springy, yet quiveringly meaty with a refreshing sweetness and a clean aftertaste, these were crustaceans worth dying for. The briney head gunk is well worth slurping down, too. The occasionally available purple prawns are well worth pouncing upon, if and when they appear on the ever-changing menu. These chunky little beasts had all the charms of the red prawns, but with an added musky moreishness that was incredibly beguiling. If I ever end up on death row for conspiracy to launder money, racketeering and other high felonies, then these critters would form part of my last supper. 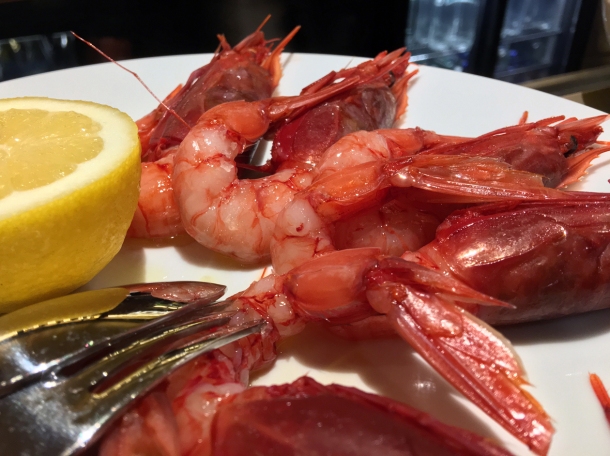 This is the life we chose, the life we lead. And there is only one guarantee: none of us will see heaven. 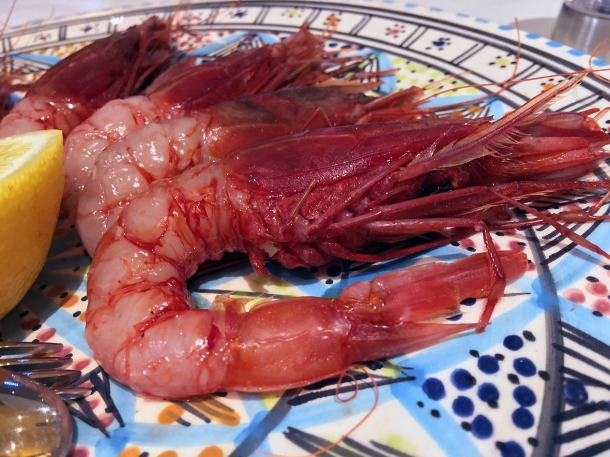 Our country’s not an island any more. This is the decade in which London *will* become Europe’s capital.

While tender and milky, the grilled langoustines were still quite bland. You’re far better off having them raw. Simultaneously slender and chubby, their moist, sticky little bodies were almost writhing with a citrusy sweetness that rivalled the red prawns for my affections. Oysters are one of the stereotypical foods of the well-to-do and for good reason – they can be utterly delicious. The oysters here were among the best I’ve had in London – plump with a briney start, a subtly creamy sweet followthrough and a clean aftertaste. 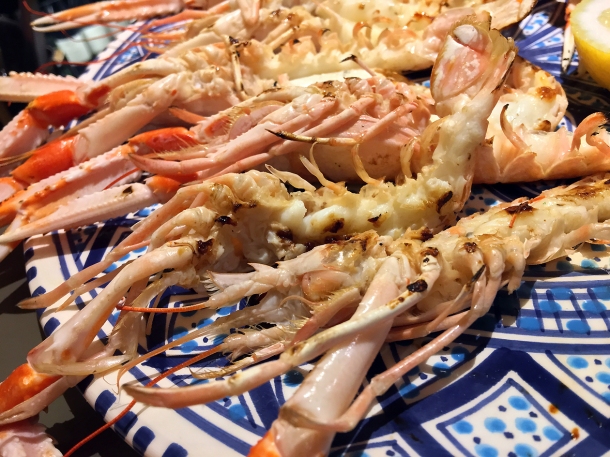 You don’t crucify people! Not on Good Friday! 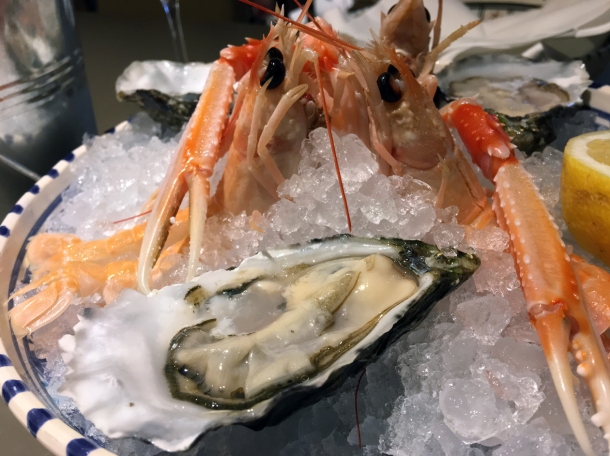 After what happened this morning, you’d have to find his hooter to get up it.

Cuttlefish gets a bad rap, but their springy bite and tender followthrough can often be an apt conveyor for other things. In this case, it was a fine companion to moreishly bitter stems of friarielli, which was in turn offset by fruity sweet olive oil. A lipsmacking dish that, when available, shouldn’t be overlooked. 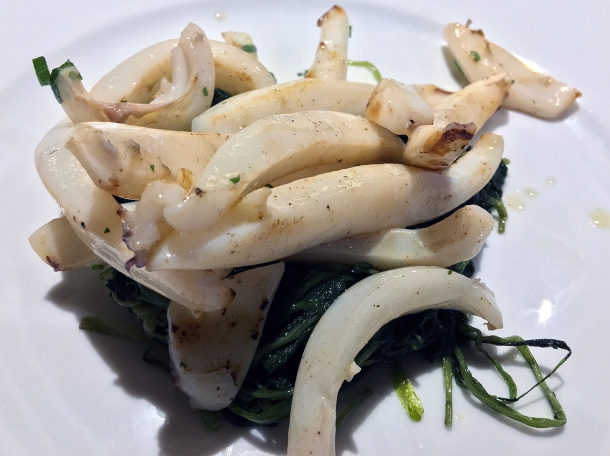 Two men need an organ transplant, but there’s only one organ.

Although the octopus salad arrived without any salad, I hardly minded given the firm meatiness of the octopus. Each muscular chunk came dressed in a one-two punch of bitter herbs and sweet olive oil.

I just hope my son doesn’t turn out like me. 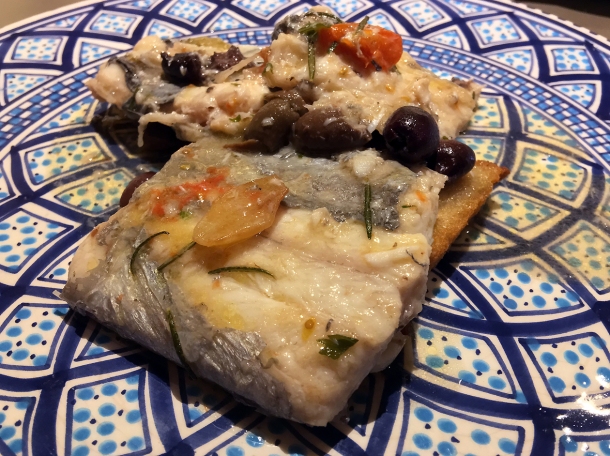 Thousands must die, so that Caesar may become great.

Depending on your perspective, troife pasta looks either like stunted noodles or grown up spatzle. Either way, it seems to be a permanent fixture on the menu although which fish it’s cooked with seems to vary. One version saw the al dente pasta accompanied by meaty flakes of just-cooked sea bass and a strong, but not overpoweringly zesty punch of lemon. A combination of pasta, fish and citrus sounds somewhat odd and unappetising to Anglophone ears – largely because of the citrus – but it proved utterly delicious. Conversely, it’s not worth paying the £5 premium for the troife with blue lobster. While the lobster was firm and meaty, its scanty presence made this version of the troife feel like a stick-up job organised by a shady ‘accountant’. 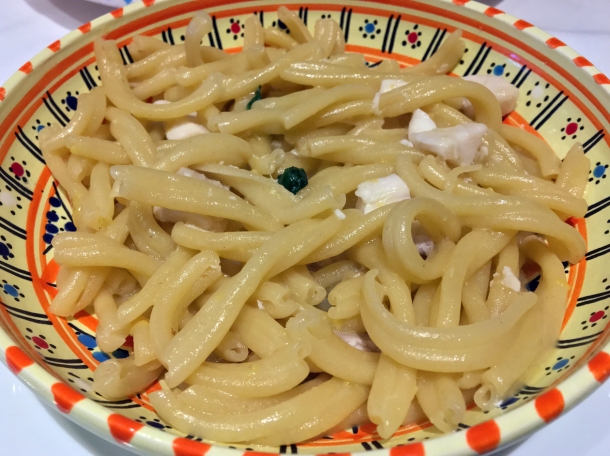 I can read only the pictures. 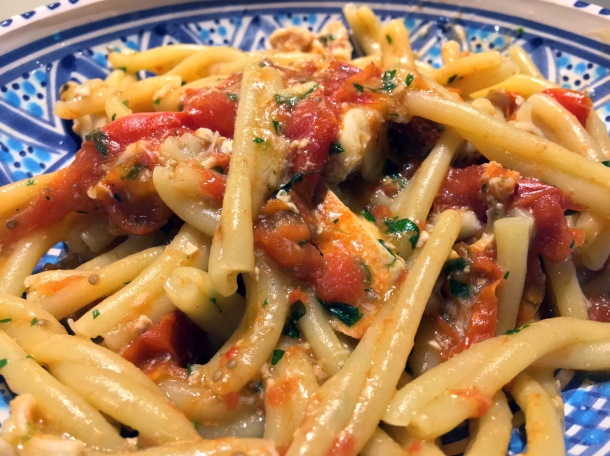 Paccheri, which look like little collars or sleeves of pasta, came with meaty, earthy grouper in a gently umami tomato-based sauce. Simple, but highly effective. 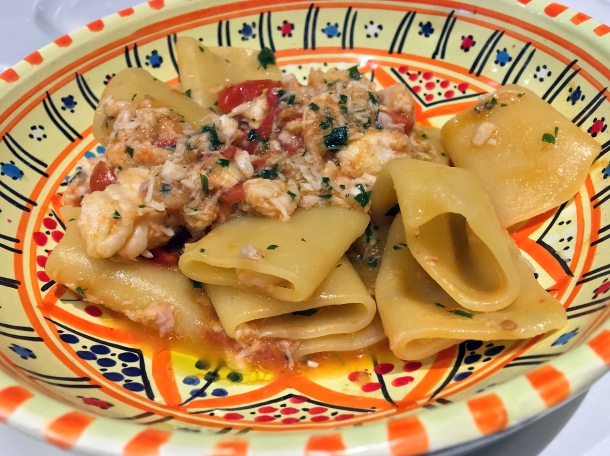 Look at your suntan, it’s leather.

Swordfish milanese was a waste of swordfish. Similar to a Wiener schnitzel or veal milanese, this dish saw the fish battered with a fine-grained breadcrumb and deep-fried. The battered mantle was a bit too oily though, while the swordfish inside had been reduced to a pale, insipid imitation of its former self. If pescatarians ever want to know what bland, wretched supermarket pork tastes like, then this is their chance. 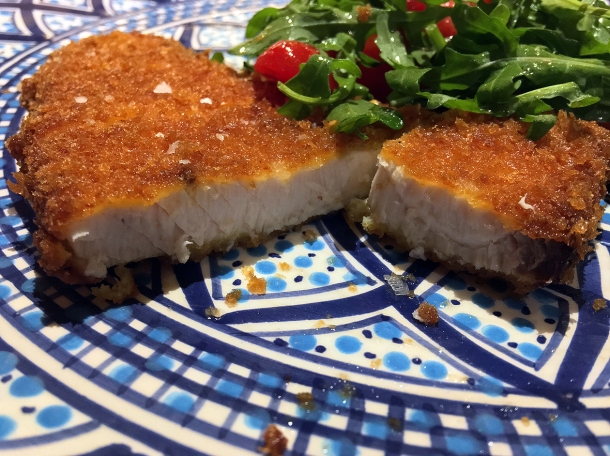 These are your last words, so make them a prayer.

While not the best gelato you’ll find in London, Pescheria Assunta’s (almost certainly) bought-in gelato and sorbets were still highly respectable. Smooth with reasonable levels of denseness and elasticity, the pistachio flavour had a moderate level of richness that was more or less true to the nut. The vanilla flavour, meanwhile, was surprisingly enjoyable thanks to its delicate floral sweetness. Lemon sorbet had a slightly Jif-ish aroma to it, but it was uniformly smooth from beginning to end. It was also consistently refreshing and bone-chillingly, cockle-rattlingly cold. A few tubs of this stuff would be enough to dehumidify a sweltering Roman solitary-confinement cell during an August heatwave.

There’s a lot of dignity in that, isn’t there? Going out like a raspberry ripple. 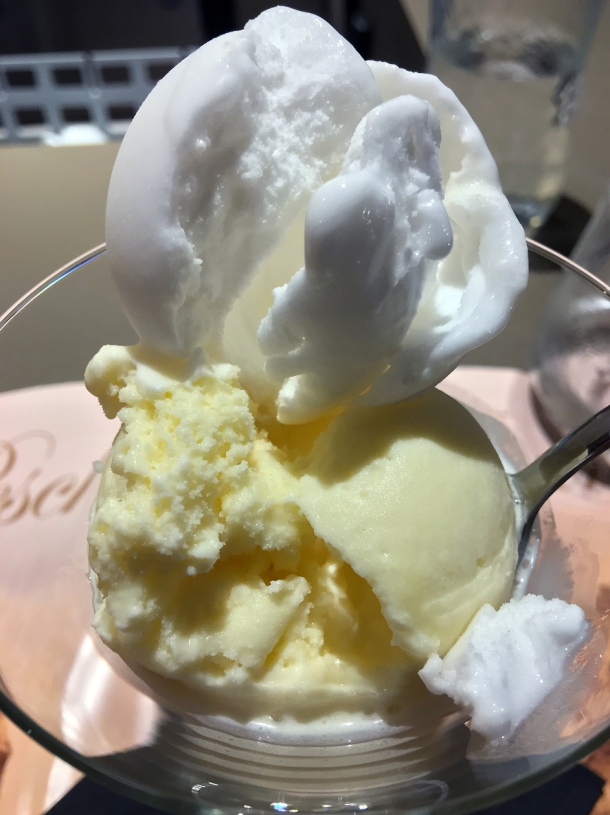 Tiramisu was a bold wollop of cream and bitter coffee that wasn’t especially complex or layered, but it was certainly unforgettable. The apple pie was no homely traybake, but more like a custard tart with its creamy, eggy filling dotted with sweet, tenderised apple pieces. I never thought tiramisu would be outclassed by an apple pie in an Italian restaurant, but then life is full of surprises. Like suddenly being arrested for money laundering. 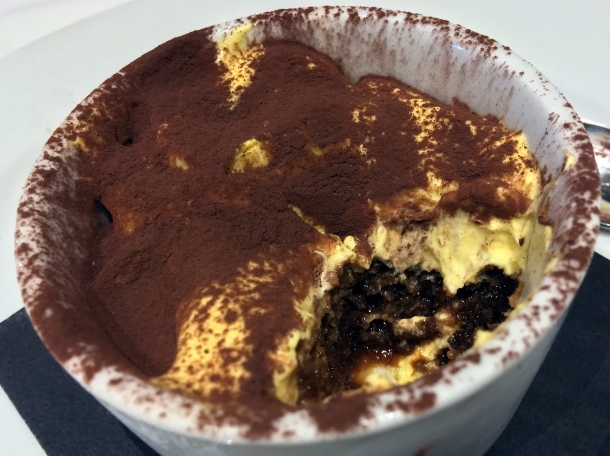 I gotta change my shirt, it’s sticking to me. 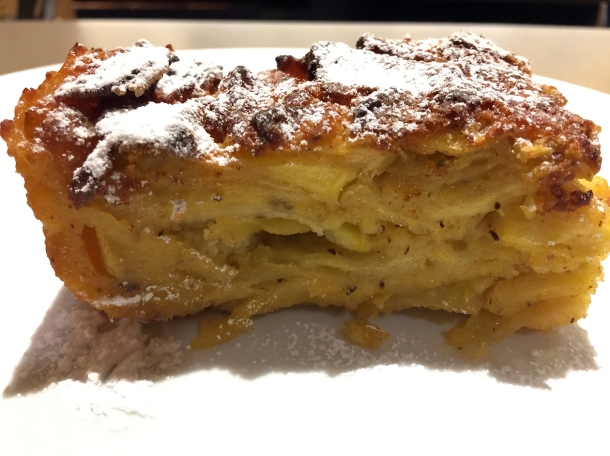 Why are you swearing? I’m not swearing.

There’s no doubting the quality of the produce at Pescheria Assunta – the sumptuousness and richness of the seafood was truly remarkable. The problem is that the experience was almost ruined by the ramshackle service and the occasionally clumsy way in which the kitchen chose to prepare and serve some of its aquatic bounty, from the swordfish to the langoustines. This suggests that Assunta is – to some extent – coasting by on the sheer innate quality of its seafood. That doesn’t mean Pescheria Assunta isn’t worth eating at – far from it. But care is required, both in keeping an eagle eye on the floundering staff and in choosing carefully from the menu. Raw and relatively simple preparations tend to be the safest bets.

Then there’s the thorny issue of proprietor Gianni Micalusi and whether he has any involvement in money laundering or not. Not only has Micalusi not responded to questions about his legal status, he has also deleted all his social media accounts a few days after my repeated requests for comment. Even the website for Pescheria Assunta itself (previously a hopelessly unintelligible mess devoid of any useful information) has gone off-line. Like the restaurant’s associated fishmonger and wholesaler a few doors down – which always seemed devoid of both display prices and paying customers – the real story about Micalusi and his London restaurant remains enigmatic. For now, anyway.

Web: https://www.pescheriaassunta.com/ (offline at the time of original publication)

Reservations: highly recommended on and around weekends

Average cost for one person including soft drinks: £50 approx. (£80 approx. if you’re not careful)