Marcus Wareing or not, you need to eat here

Covent Garden has more than its fair share of shoddy restaurants. For every quality eatery such as Ape and Bird or Opera Tavern, there’s a dozen more slop houses such as Five Guys or Joe’s Southern Kitchen. Tredwell’s is a new restaurant situated inside the premises that used to be home to Kyashii, a very glossy and utterly forgettable Japanese restaurant that won’t be missed. Tredwell’s couldn’t be more different though, from its handsome tiled interior and laid back, casual atmosphere to its eclectic menu.

Tredwell’s is part of Marcus Wareing’s empire, although the man himself doesn’t cook here. That doesn’t matter though. Most of the dishes are designed to be shared, yet the sprawling, eclectic selection seems disorganised making it difficult to choose. That doesn’t really matter either. The cooking at Tredwell’s proved to be of a such a consistently high standard across nearly all of my visits, that I still can’t quite believe it.

Like Soho’s Social Eating House, Tredwell’s has a beguiling selection of small snack/starter-sized dishes served in little jars. If the slightly overwrought presentation puts you off, then get over it. The taut and slippery pickled mushrooms in a punchy tarragon sauce and served with soft, wispy ricotta is simply unmissable.

There’s not mush room in this jar.

The smoky, meaty chorizo jam was more like a finely minced pork chilli, but still very enjoyable nonetheless. The jam was served with bread that was lightly charred, probably in an effort to accentuate the jam’s smokiness, but to no great effect.

The confit cod was light, delicately textured and had a subdued saltiness that meshed well with its creamy sweet potato accompaniment.

A far heavier dish was the beef short rib. Designed for two, and priced to match at £32, it can be devoured by a single person if you’re hungry enough. Oddly, it was served detached from the bone, with the latter merely serving as decoration. The large hunk of meat, apparently ‘slow cooked smoked’, pulled away in tender strands that were moist and salty with most of the flavour concentrated in the thin layer of collagen attached at the bottom. It was lacking the complex depth of flavour of a proper American-style barbecued short rib, but was reasonably pleasant enough in its own right.

The avocado and white chocolate mousse was creamy with the strong, distinctive taste of the fruit. The heavy scattering of chocolate cornflakes on top didn’t taste of much, but did provide a crunchy contrast in texture.

If the jar of pickled mushrooms from my first meal was unmissable, then the jar of whipped lardo and pickled vegetables was worth killing for. The wonderfully crisp and tart collection of sliced cauliflower, carrots, cornichons and more was made even better when taken with the wispy, yet decadently salty and creamy lardo. It all made for a richly flavoursome dish that I could eat all day. At least until I keel over from over consumption. 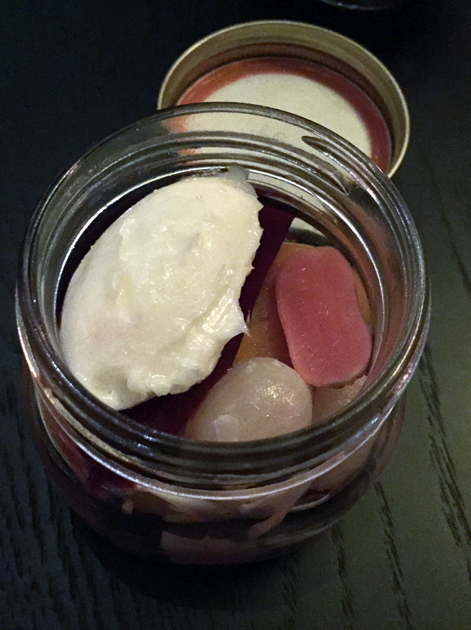 The poached hake would’ve been more than good enough on its own. Despite the sheer bulk of the surprisingly generous portion, it was nonetheless delicate and milky. It was made even better though by the tart pickled onions and nutty black rice which were both very punchy and complimented the fish surprisingly well.

Squid is often done very poorly, but not so here. The salty, zingy squid was accentuated nicely by a dash of salted cod roe, while the buttery courgettes and peppers made for superb accompaniments.

I wasn’t prepared for the deeply satisfying nature of the curried lamb sweetbreads. The tender, slightly chewy and very offaly sweetbreads were served on a bed of soft, buttery lentils and both were doused in a moderately spiced curry sauce that tasted strongly of cumin. The silky mouthfeel of the soft sweetbreads and lentils dissolving gently made this dish the perfect antidote to a stressful day. 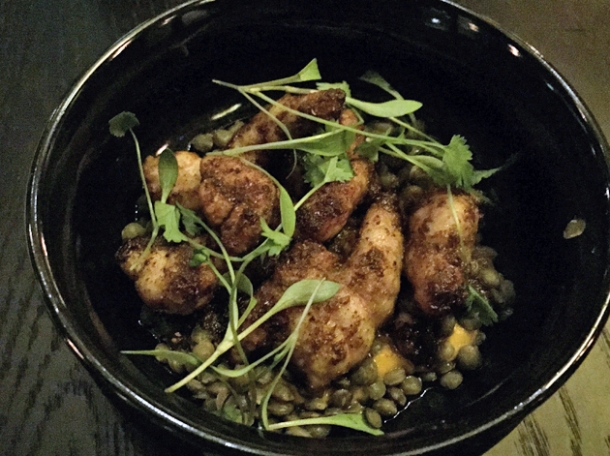 The olive oil cake sounds weird, but was far less bizarre in practice. Although fluffy with a light crumb, its very mild fruitiness was far too subtle and easily overwhelmed by the punchy sweetness of the blackberry jam and the eggy richness of the the custard mousse layered on top. I’d much rather a giant bowl of the custard mousse.

Tredwell’s is a compelling option for lone diners due to its counter seating and the smaller versions of its many dishes, but the place really comes into its own when dining as part of a group. Grazing between several large dishes makes meals a much more convivial affair, especially if you have dining companions as rambunctiously iconoclastic as Vicious Alabaster, Templeton Peck and The Squinting Brummie. Both the poached hake and the squid with courgettes were just as good as they were before. 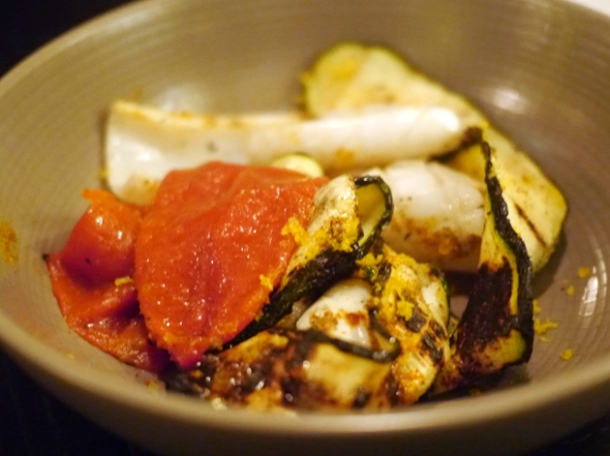 Naturally, I somehow managed to take a photo of a squid dish with the squid out of focus. Ho hum.

This was my last meal with The Squinting Brummie as a regular dining companion, as the beady eyed, arse-chin is abandoning London for New York. It’s probably for the best, especially as he’s already developed a taste for stereotypically American-style dishes. The fries and sweet potato chips were nothing to write home about, but the chicken wings were far more enjoyable. The tender milky wing meat was covered in a moderately crisp coating that had a mildly spicy, yet addictively moreish kick to it.

The Brummie continued his poultry scoffing with the chicken liver mousse. Although thin and wispy, it was still distinctly creamy and meaty although both the Brummie and Vicious Alabaster wanted it to be thicker and heartier. The chargrilled chicken was universally adored though. The smooth, tender yet meaty medallions of chicken were served in a mildly creamy sauce that had a mild yet still distinctive taste of peanut. The sauce was flavoursome without being overwhelming, while the small chopped bits of cucumber added a hint of refreshing sweetness. It was like a reimagined chicken satay, but without the predictable cloyingness of most satays and without becoming a parody of itself. 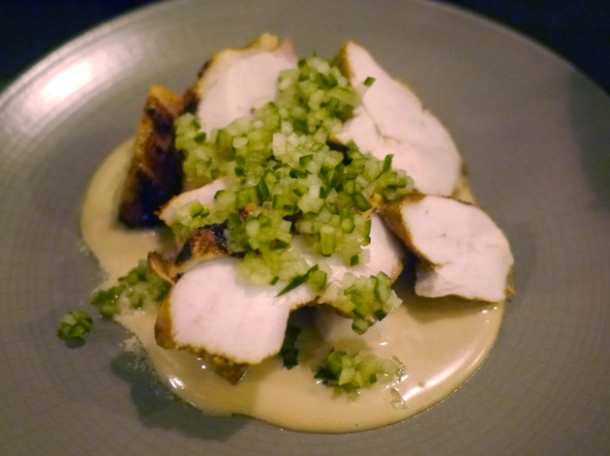 Chicken satay, but not as we know it.

The chicken thighs came coated in a sticky sauce that was also a little smoky and slightly spicy which complimented the surprisingly moist, fatty meat very well. It was vaguely like a kung pao chicken, but in a good way.

Vicious Alabaster took a bite out of my thigh. And I liked it.

I wasn’t expecting much from the crispy prawns, but the lightly battered crustaceans weren’t too oily, excessively crunchy or heavy. The prawns themselves were a little on the bland side and it’s a shame that there were was so much battered onion filler thrown in, but the sharp, sour and tangy kimchi-infused mayo served on the side made up for this.

Carnivores will turn up their snouts at the beetroot and egg burger, but this meat substitute sandwich was surprisingly decent even if the colour is quite lurid. Vicious Alabaster found the sweet and slightly tart patty a bit cake-like and while the odd flavour is definitely an acquired taste, neither it nor the neutral-tasting bun fell apart.

If you’re hankering for some real beef, then the onglet steak will serve you well. The tender and juicy slices of steak cooked rare were served a mildly tangy and flavoursome mushroom-based ketchup. 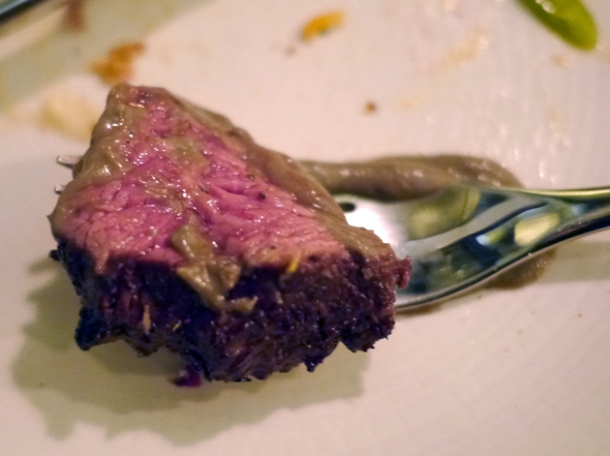 A tender, meaty hunk of lamb belly arrived in a sweet, mild and delicately creamy curry-like sauce that was surprisingly layered and complex. Lip-smacking. 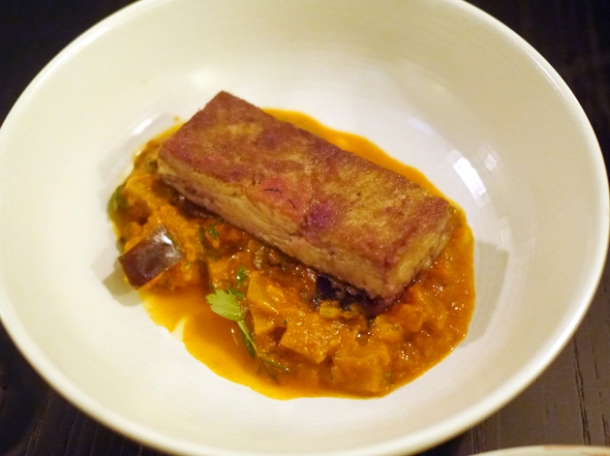 There was a lot going on with the charred squash, but surprisingly the disparate elements of this vegetable dish all come together. Being charred on a grill helped rather than hindered the buttery flavour of the squash, which blended together well with the earthiness of the goat’s curd which had a pleasing elasticity. The crunchy, bold tasting peanuts added another variation in texture, while the juicy and almost prune-like grapes added a touch of sweetness.

Templeton Peck likened his muscovado sponge to a light and fluffy walnut and coffee cake. The Squinting Brummie wasn’t happy with his brownie though as it came flecked with coconut and was served with a moderately thick yet wispy coconut ice cream. The beady eyed so-and-so doesn’t like coconut and its inclusion wasn’t mentioned on the menu, but Vicious Alabaster was more than happy to scoff it for him even if it tasted like a glorified Bounty bar or fancy Sno Ball. 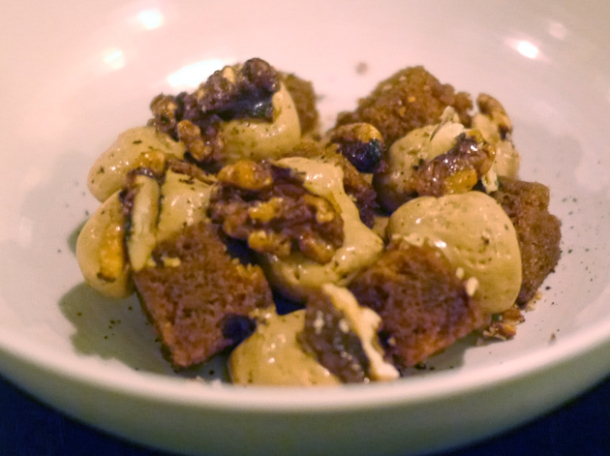 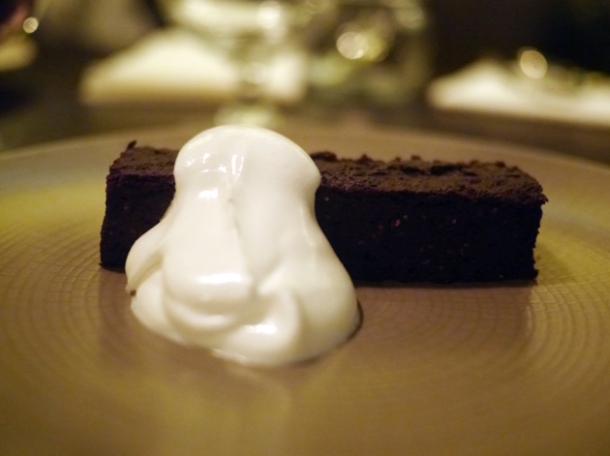 Mutiny on the Bounty.

The oddest dessert on the menu has to be the pain perdu, an airy, buttery French toast-style bread pudding but topped with minute yet crispy bacon bits and served with a bar of sweet, tangy maple cream. Vicious Alabaster enjoyed it immensely, but I found the combination of sweet and salt, crisp and soft, a little jarring and I’m still not entirely sure what to make of it.

Although the aubergine is allegedly glazed with harissa, it had more of an Asiatic than a North African character to it due the crunchy peanuts, fresh coriander, mild chilli kick and a daubing of cool, refreshing coconut yoghurt. Although the limp aubergine left me cold, the distinctive character of the rest of the ingredients made this dish a memorable one.

Harissa doesn’t know it all.

The lamb chops were executed well – slightly smoky and tender with an occasional bit of chewiness. The chops would’ve been nothing without the accompanying bed of green beans though. While the firmness of the beans contrasted nicely with the tenderness of the lamb, the zingy, refreshing hit of mint in the beans provided the contrast in flavour. The mintiness wasn’t too sharp or overpowering and had a sweet chutney-like edge to it that was very pleasing.

The minty beans are underneath the chops.

The kale salad wasn’t especially distinctive, but it was well executed and won’t leave vegetarians feeling short-changed. The fluffy quinoa, wrinkly kale and charred broccoli were all present and correct. 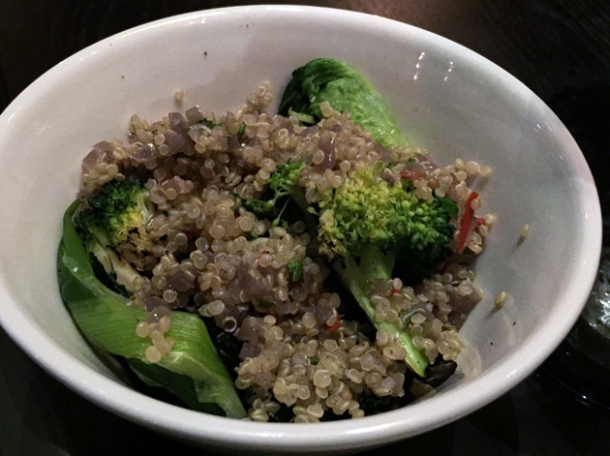 Daily kale. Far, far better for you than the Daily Mail.

I fully expected the polenta fries to be a disappointment, yet the thick, fluffy chips were relatively pleasing. The distinctive nuttiness of polenta was there, albeit muted, underneath the mildly crisp exterior. Divorced from the usual texture of polenta, a stronger nuttiness would’ve been a better match though for the sharp fruitiness of the accompanying tomato-based dip. 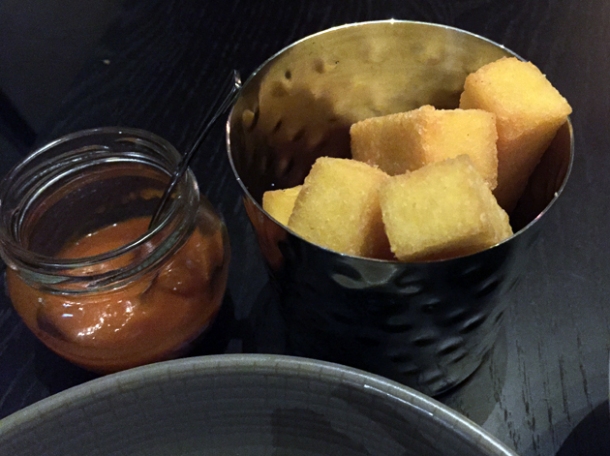 It is a truth universally acknowledged, that a bowl of chips won’t last a minute without some greedy sod pinching one. In this case, me. 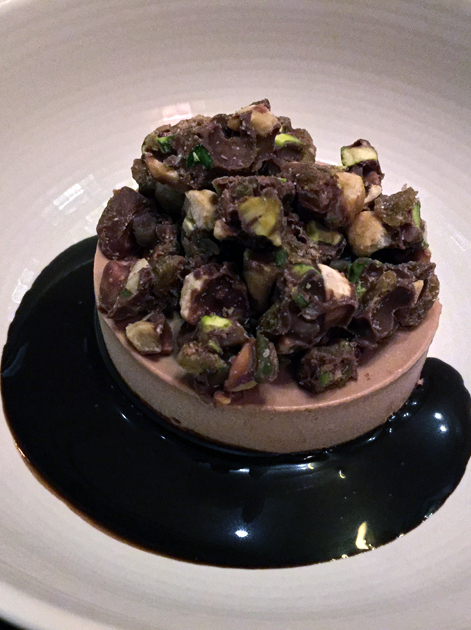 Other reviewers have not been kind about Tredwell’s. Some object to it for thinly-disguised reasons of culinary snobbery, while others have more prosaic, practical criticisms (none of which I experienced). Logically I accept that the perception of taste is so dependent on one’s own personal interpretation of sensory stimuli that there is no objective truth and that therefore those opinions are just as valid as my own. Yet, on an emotive and instinctive basis, I cannot and will not accept them.

The food at Tredwell’s was, for the most part, bold and accessible, rather than subtle and complex. It left me satiated, but not bloated. Many of the dishes are derived from existing ones but with inventive quirks, yet remain recognisable riffs rather than overwrought postmodern deconstructions. It’s a diner that stays open reasonably late, yet remains a relative haven of calm. I can dine alone in semi-anonymous seclusion, or feast with friends in bacchanal glee.

What to skip: Beef short rib

Reservations: only taken for weekday lunchtimes and at dinner for groups of six or more