Run away, Forrest, run away!

It’s very, very easy to be negative about Bubba Gump. The Leicester Square branch of this seafood chain is the first outside the US, but it follows the chain template so closely you would never know you were in London. Themed around the movie Forrest Gump, you have to make your way past a souvenir shop on the ground floor to get to the upstairs dining room. Made up to look superficially like a shack, the wood-effect walls are sprayed with so much Forrest Gump-related memorabilia and chintz that you’d swear it was a CGI special effect. The budget ran out when it came to the ‘wooden’ tables though which are actually made out of lightweight plastic, so don’t lean on them too hard or you could end up shoving it around inadvertently.

I wasn’t hungry but thirsty, I must’ve drank me fifteen Dr. Peppers.

It’s all desperately naff, but it’s not hard to see the attraction of a themed restaurant. It’s an easy way to distract the kids and it’s the safe, predictable, reassuring choice if you’re a tourist genuinely intimidated by queues, tattooed and bearded hipster staff, having to book 27 years in advance, dim lighting, hard to navigate menus or any of the many other annoying London restaurant trends.

It’s therefore not the themed nature of Bubba Gump that I object to per se, but the crass elements that creep into the service. The staff themselves are all suitably cherry, polite and efficient but if I wanted a pop quiz about Forrest Gump during dinner, I’d load Buzzfeed on my phone or attend a crap pub quiz. Express any curiosity whatsoever into the themed fittings, and the staff will immediately put out that it’s for sale in the downstairs shop.

Then there’s the food. The gumbo tastes like peppered gravy dotted with scabs of tasteless fish and sausage as well as a lot of rice filler. 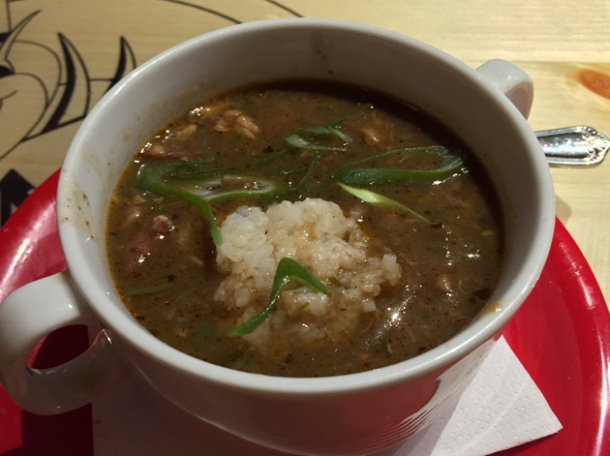 Stupid is as stupid does.

The Shrimper’s Heaven is more like seafood hell. The battered coconut shrimp is far too crunchy and tastes like a sugar bomb. The prawn tempura is far too crunchy and oily, with barely any actual prawn underneath it all. The steamed shrimp is mercilessly tasteless and a little on the soft side. The bed of shredded cabbage on which the shrimp dishes are served on is genuinely more appetising. 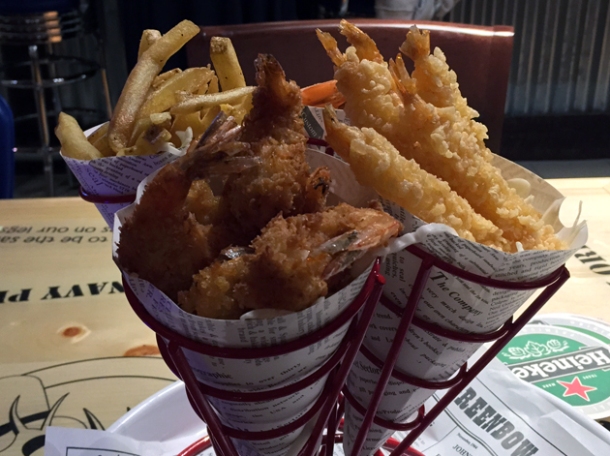 Stop calling it shrimp. They’re called ‘prawns’ on this side of the pond. 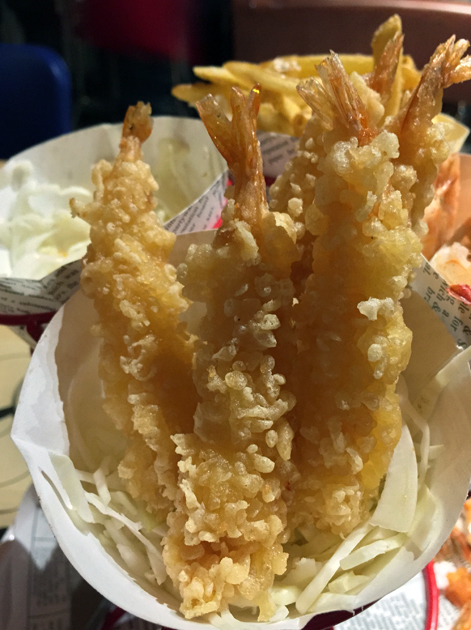 Bubba Gump is like a box of Quality Street. 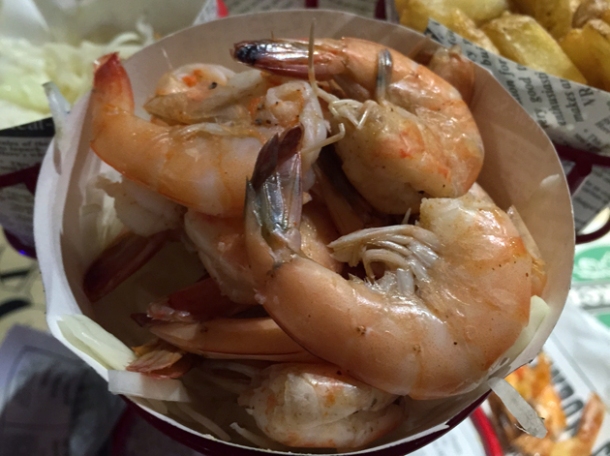 Everything inside will make you weep in despair.

Dessert was no better. The wispy cream filling of the key lime pie was unpleasantly sour, while the thin crust was a quick way to an early death via a sugar overdose. 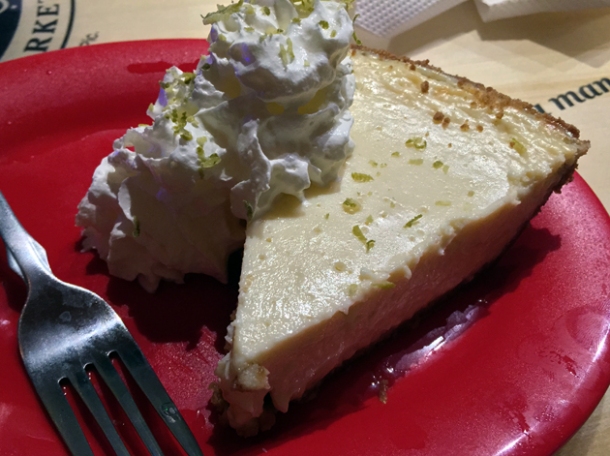 If you’re tempted to have one of the iced drinks, only do so if you’ve just returned from a workout session in a furnace while wearing a parka. The mango iced thing was so cold, it made my stomach recoil in pain. This sort of thing should be banned under the Geneva Convention – and that’s not even considering the atrociously naff blinking lights attached to the base of the glass. 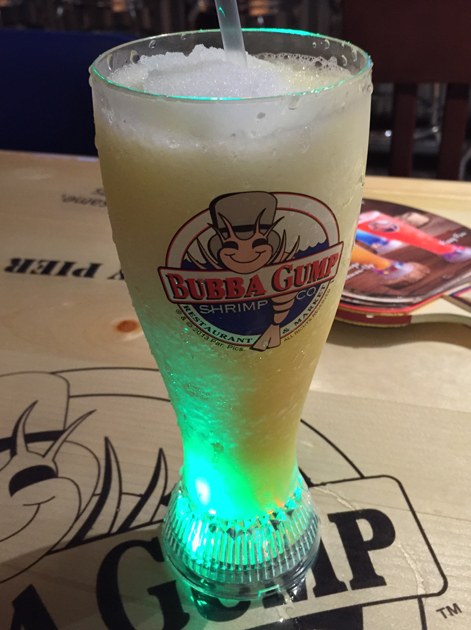 Going back for seconds. For some reason.

I really didn’t want to return to Bubba Gump, but my sense of fairness compelled me to do so. And to be fair, there were signs of improvement. The prawns used in the shrimp mac and cheese were much firmer, if still blander than a Miss World contestant, while the melted parmesan tasted more like Dairy Lea. At least the pasta shells were reasonably firm and the thin crust of tiny bread crumbs was crunchy.

Me and Bubba Gump goes together like the Greens and UKIP.

The same firm but tasteless shrimp turned up again in the ‘Accidental’ shrimp and mahi mahi. The portion of fish was surprisingly generous and reasonably meaty yet delicate, but it was served in a strangely bitter butter sauce that was weird and a little unpleasant. 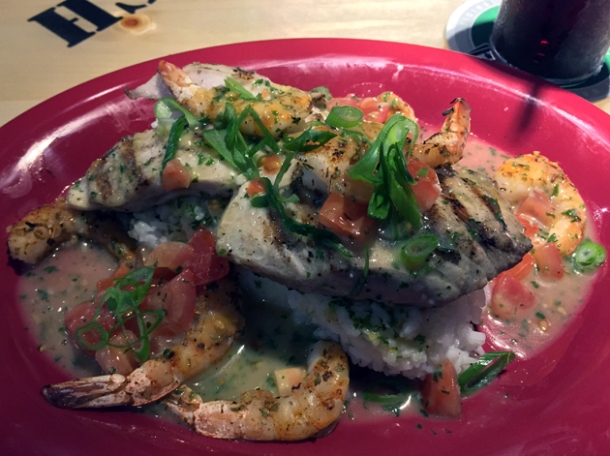 I’m sorry I had to fight in the middle of your Black Panther party.

The bread pudding was topped by a needless asteroid of whipped cream and served with some bland ice cream. Shoving all this aside, the pudding itself was very fluffy if totally dependent on the very sweet raisins and oddly thin, buttery sauce for flavour. Not bad. 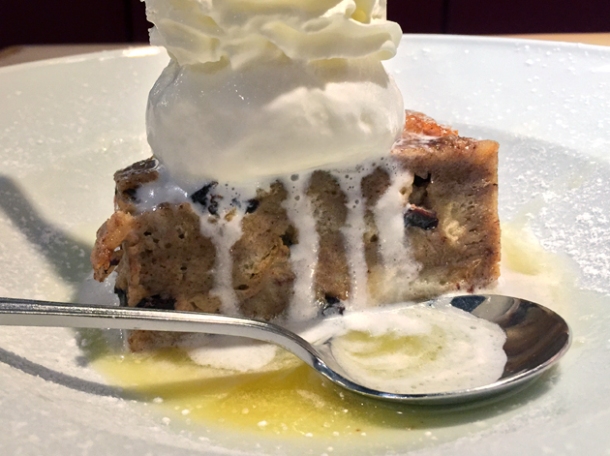 Bubba Gump isn’t just awful, it’s awfully cynical too. An average cost of around £40 is an inexcusably high price to charge people who don’t know any better for such dreary food. At best the food is passable, but at worst it’s simply terrible.

It’s easy to blame the faceless multinational conglomerate behind Bubba Gump, but the truth is that London’s restaurant industry isn’t doing enough to welcome the timid and the unknowing – and promoting equally bad native chains such as Garfunkel’s or Angus Steak House doesn’t count – if Bubba Gump is succeeding. And it is succeeding, judging by the packed tables from my two visits.

I’m going to hide under my comfort blanket and I’m not coming out until Spring.

What to order: Shrimp mac and cheese

What to avoid: Almost everything else

Average cost for one person including soft drinks: £40 approx.