The Polpo guys do it again

It’s mildly myopic to say that there’s no where good to eat on Shaftesbury Avenue as the myriad delights of Soho, Covent Garden and Chinatown are only a few minutes walk away. Still, if you can’t bear to tear yourself away from the Theatreland thoroughfare then you can at least take refuge in the Ape and Bird, a pub from the guys behind the Polpo empire of Italian-esque restaurants (which also includes Mishkin’s and Spuntino).

Although I’ve categorised The Ape and Bird as a gastropub for the sake of easy searching, it’s not a restaurant in all but name like most other gastropubs. A large swathe of the ground floor, as well as the basement, is devoted to drinking while the upstairs and a small space on the ground floor are set aside for eating. Like Polpo, reservations are taken at lunch time but not for dinner. If you’re eating by yourself or as part of a two-some, then the bar in the ground floor dining area is a perfectly pleasant place to while away an hour or two as the bar staff are a chatty, friendly and informative bunch. 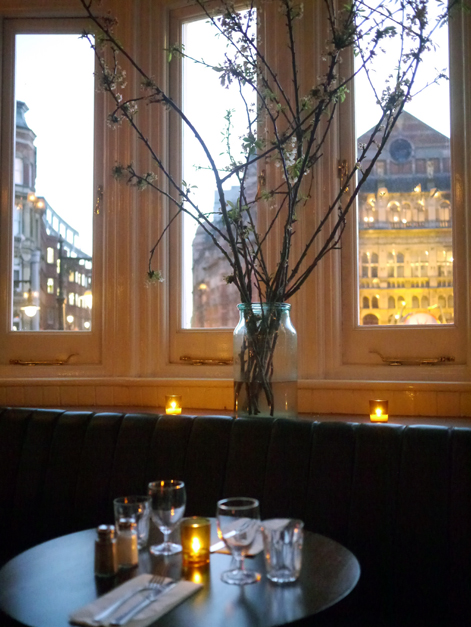 I first visited The Ape and Bird during its soft launch period and started off with the pig trotter scotch egg served with celeriac fries. The reasonably crisp coating gave way to a moreishly porky layer of moist and tender meat. The egg was solid all the way through – a runnier yolk would’ve been far better – and the very thin celeriac fries left me unmoved. The pork is a good start, but the egg as a whole still has a way to go to match the stonking scotch eggs at The Pig and Butcher in Islington. 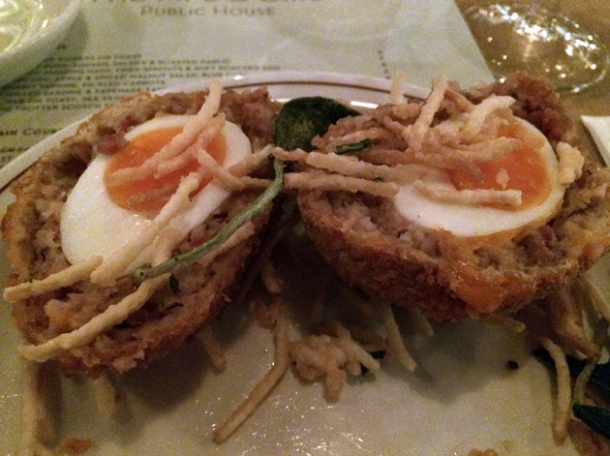 Five quatloos and a ton of kudos to anyone who opens a pub called The Chimp and Puffin. Because chimps and puffins are awesome.

The roast cod has a salty and taut skin that was very moreish, but the fish flesh itself was merely okay. It had also been poorly matched with some beetroot – its earthy flavour tended to overpower rather than compliment the fish. It wasn’t all bad though – the thin, moreish sauce was lip-smackingly good. 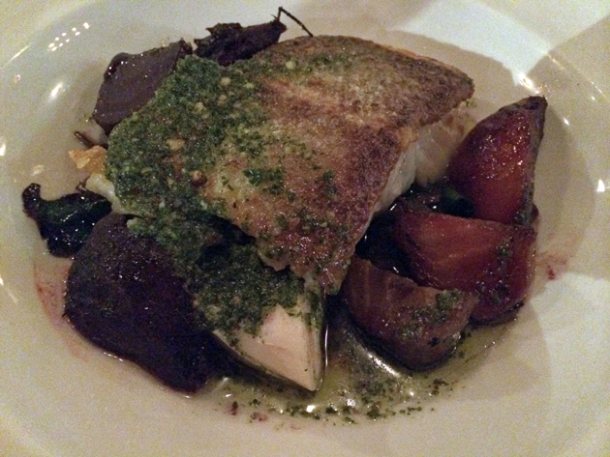 A traditional side for cod is of course chips. The thickly cut chips here were soft and free from excess oil. Although they’re not a patch on the triple cooked chips available from the nearby Seven Dials branch of Hawksmoor, they’re decent enough in their own right.

Yup, those are chips.

Although I don’t love sticky toffee pudding quite as passionately as Wicket does, it’s still a personal favourite and The Ape and Bird’s sticky date version is top notch. The pudding itself was soft and fluffy with a fruity, treacly rich sweetness. The accompanying ice cream was a bit bland when eaten on its own, but took on a rum and raisin-style character when eaten with the pudding.

Since my first visit occurred during the soft launch period, I had to return once The Ape and Bird was fully up and running in the interests of fairness. Don’t expect any carbs when ordering the penny buns – the name is apparently slang for cep mushrooms. The earthy, tender ‘shrooms were served in a thin but muted squash puree. Far more flavoursome was the punchy roasted garlic – squeezing the large chunks out of their skins with my fork and devouring them with some mushrooms was very satisfying.

Penny buns. Is this Cockney rhyming slang or something?

Even more satisfying was the mutton mince with English dumplings. Although this sounds like something your drunken doddery grandfather might make, it is absolutely worth your time. The small dumplings were so soft, they almost resembled gnocchi and had a tanginess to them that complimented the tangy, moreish sauce and hearty helping of mince very well. My only whine is that I wanted more dumplings. 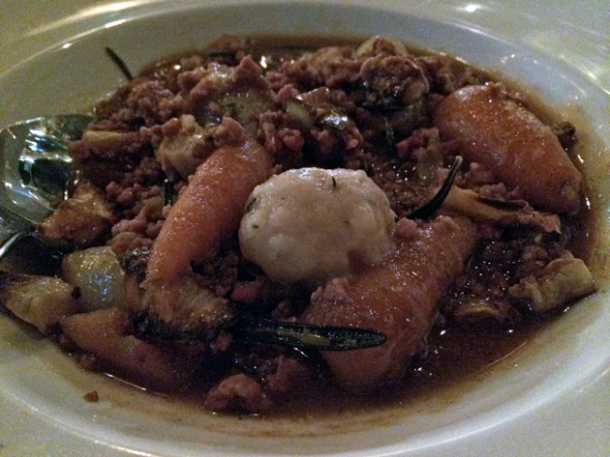 Welsh rarebit probably isn’t eaten often as a side dish. Here, English muffins were used instead of sliced bread. The chewy, slightly stodgy disc of carbs nonetheless proved to be a good way of delivering the viscous, tangy cheese mixture into my gaping maw. The sweet, caramelised flavour almost resembled brunost – a rather odd Norwegian brown cheese that’s so sweet it’s almost like fudge.

I finished off my meal with the apple and blackberry crumble. The crunchy, crumbly crust gave way to the sharp sweetness of the whole blackberries and apple slices which contrasted nicely with the thin, sweet and eggy custard. The latter was especially good and if I could drink it with a straw on a daily basis, I probably would.

The custard is served in a jug for pouring at your leisure.

Large groups eating at The Ape and Bird will have to order from a set menu that consists of some of the simpler, more crowd-pleasing dishes from the main menu. This won’t suit everyone, but it wasn’t a problem for myself, The Squinting Brummie, Vicious Alabaster and Burrito Fiend, among many others, on a bright weekend evening.

Burrito Fiend started off with the smoked salmon topped with a crust of dill crumbs. The taste of dill came through strongly, although it did tend to overwhelm the already muted taste of the salmon. The fine-grained crunchiness of the crumb dusting did contrast nicely with the smooth texture of the fish though, which was also not excessively oily.

There’s a dollop of creme fraiche if you like that sort of thing.

The scotch egg wasn’t just as good as it was before, it was even better. The reasonably crisp outer coating gave way to moreishly porky and moist sausage meat as well as a delightfully rich and runny egg yolk. The celeriac fries were saltier and crunchier than before, providing a pleasing contrast to the moist softness of the sausage meat and egg. Top notch. 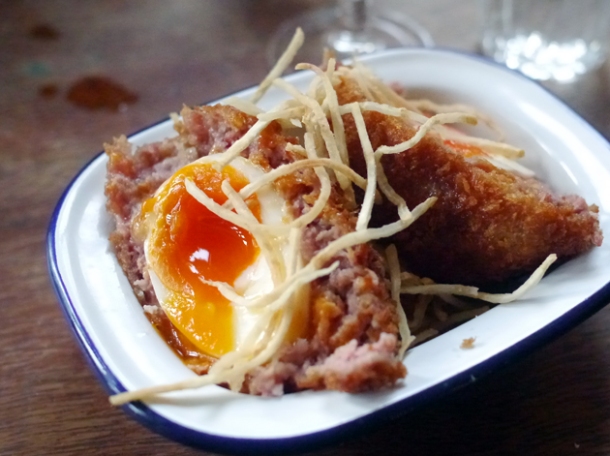 Did the Scottish actually invent scotch eggs? If so, well done Scotland.

The Squinting Brummie, Burrito Fiend and I all went for the cheeseburger. The patty was slightly dry, but not disastrously so. It was still pleasingly meaty and was also smoothly ground with a hint of chewiness. The soft, slightly sweet bun didn’t fall apart, but it was too small to hold everything together with the lettuce, long slices of pickle and sweet burger sauce and melted cheese dribbling out onto the plate. It’s not the best burger in London, but it’s of an acceptable standard and still far better than most.

Salisbury steak in a bun.

Vicious Alabaster went for the mussels which was easily the better main. The fleshy little sods were served in a thin yet richly herby and zingy sauce that was also lightly salty. Mopping up every last drop with the included doorstop of bread was a distinct pleasure.

Oddly, the fries arrived long after our mains were finished and they weren’t worth waiting for. A gastropub should not be serving limp and floppy fries – it’s proper chips or nothing.

I couldn’t help but have the crumble for dessert again and I wasn’t disappointed. The crunchy crumble and tart, tender chunks of apple went beautifully with the thin, mildly eggy custard. Soothing. 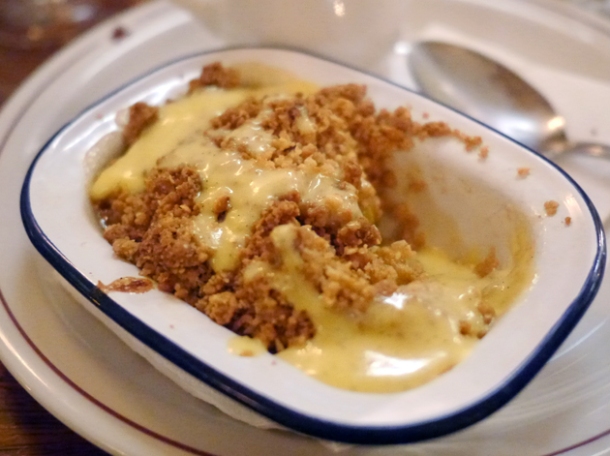 There is a hole in my mind.

Everyone else had the brownie which turned out to be a mistake. Although chewy, it was too bland and dry. The milky ice cream added some much needed moisture, but the promised salted caramel was only mildly tangy and toffee-ish at best.

The Ape and Bird claims it’s ‘just a pub’, but its deceptively simple food isn’t just hearty and homely, it’s also a touch inventive and soul soothingly satisfying. Although it’s not perfect or cheap, and it’ll be interesting to see how the menu adapts to the warmer months, The Ape and Bird nonetheless serves the best pub food I’ve had all year. My recommendation is just as hearty as its food and that’s saying a lot.

Name: The Ape and Bird

Reservations: only taken at lunchtime