Although I only spent a day in the modern, nondescript Turkish city of Kayseri a few years back, the mere mention of this central Anatolian metropolis is enough to bring back fond memories. The city’s mod cons were especially welcome after trekking through the awe-inspiring peaks, valleys and lakes of the nearby Taurus mountain range while sharing a sweaty tent with the Flame Haired Squelchie. Much more poetic is pastirma, the cured delicacy that is arguably Kayseri’s culinary calling card.

Pastirma’s origins and impact are contested. This bresaola-lookalike may have possible Byzantine roots and may also be one of the possible antecedents for pastrami. Regardless, this cured cut of beef is a reminder that pork isn’t always a prerequisite for good charcuterie. Thinly sliced, its umami and light pepperiness was a delight – especially after a week of almost meat-free camp cooking. I bought as big a box of the stuff from a city centre deli as my already overstuffed camp bag could take. Once I snaffled the entire lot mere days after returning home, neither the saltiness of my tears or of the overpriced versions available online were good enough to fill the pastrirma-shaped hole in my stomach.

Although nominally named after the city (with a spelling change presumably for branding and SEO purposes), Kyseri isn’t a traditional Turkish restaurant. A spin-off of Shoreditch’s Oklava, its menu is decidedly non-traditional, but the Turkish and Turkish Cypriot influences are still nonetheless evident.

Kyseri is a small but tastefully decorated place with roughly two dozen covers and space for a couple more outside when the weather cooperates.

Kyseri would get bonus points for having air conditioning. But they’d be taken away again as some of the tables for two directly face the windows, so one person will have their backs resting uncomfortably against jutting window sills. Cushions are in order.

The interior designer has resisted the urge to be too obvious and decorate the bar with Iznik-style tiles.

The most prominent of which is Kyseri’s own version of pastirma, apparently cured on site. Although this rendition didn’t have the pepperiness of the stuff I tried in Kayseri, the smooth beefiness and soy-like umami were spot-on and neatly enhanced by a drizzle of fruity olive oil. The marbling of the bovine flesh was evident, even with the wafer-thin slicing. This splendid plate of pastirma may just be cured rump to some, but for me it’s even more than that – it’s inextricably bound up with warm memories of clambering over snow-coated crags, gawping at glacier-fed lakes and giggling at the Squelchie’s toes while lying underneath the Cappadocian firmament.

Kyseri’s cooking can still hit the spot, even when it doesn’t have my sentimentality to lean on. Milky, quivering soft veal sweetbreads had a crisp crust and a gentle earthiness. Although the samphire on top was surprisingly tame, the moreishly sticky sauce and gently sweet, sharp and tart onions were well-executed accompaniments for the sweetbreads.

Kyseri’s manti weren’t the nut-sized morsels I’m familiar with, but big chunky dumplings that wouldn’t look out of place in a bamboo dim sum basket. The thick, doughy skins were reminiscent of jiaozi, while the crisp, deep umami of the dense meatball inside reminded me of hearty won tons. The beefy centre had the distinctive sweet hint of sour cherry, made more obvious by the fruity, creamy sauce. I could quite happily eat an entire meal of nothing but Kyseri’s manti. 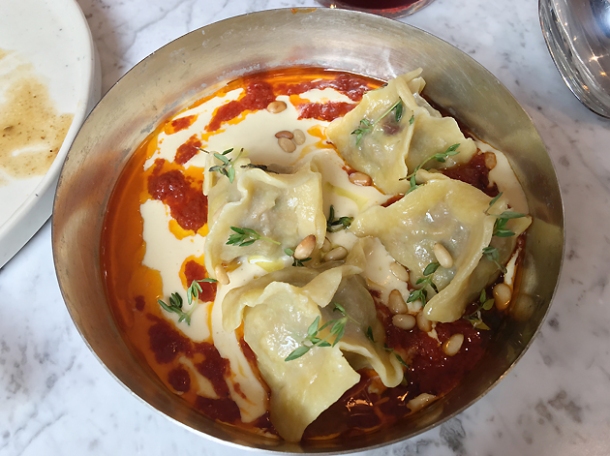 Potato gratin sounds like the side dish of choice for a particularly dour-faced countess dowager. The version here was no stodgefest though, with chopped pastirma adding a meaty smokiness to the the thin yet chewy layers of tender starch topped with sharp, sweet onions. Meat and potatoes, yes. Quotidian, certainly not.

Although the frozen confection at the centre of the ice cream sandwich didn’t taste of much, it was at least smooth, cool and refreshing. It was outshone by the kataifi-style pastry wafers, the ‘bread’ of this dessert sandwich. Crunchy, coarse, dense and chewy with an addictive honey-derived sweetness, they were a delight and more than made up for the flavour-deficient ice cream. The accompanying raspberries were fine, but it was the rhubarb that almost stole the show here with their taut slipperiness and earthy sweet sharpness. They felt slightly tacked on, but I don’t really care when they taste this good.

Sheep’s milk feta, chalky and light, was little different from cow’s milk feta. Although far from bad, this was that rare cheese dull enough to actually taste better, rather than worse, when taken with moreish biscuits and sugary chutney. I initially mistook the latter for fig, but it’s apparently an aubergine chutney. Odd, but delectable in its candy sweetness nonetheless. 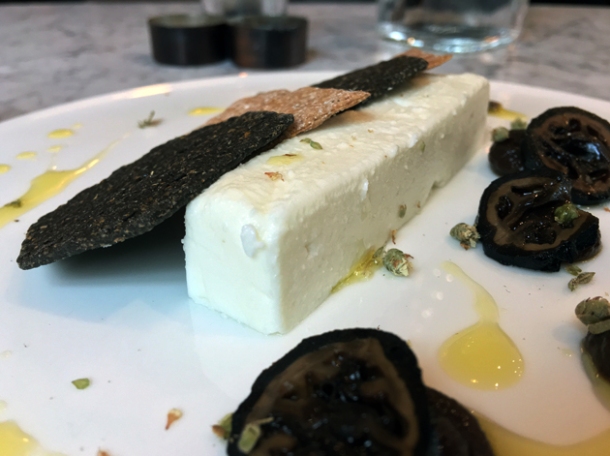 The canape-sized lentil cig kofte wasn’t what I expected at all. Rather than a sausage- or meatball-shaped affair, this amuse bouche arrived as a small mound of grounded and pounded lentils perched atop a circular crisp bread. It was pleasant enough, akin to citrusy quinoa with the crisp bread provided malty crunchy backup. It’s not worth having the optional steak tartare topping though – the modestly chewy sinews of beef added little.

An amuse bouche in almost every way.

Kyseri’s octopus dish won’t win any Instagram beauty awards, with the tentacle chopped into small segments rather than presented whole in all its coiled, muscular posturing glory. It was still firm and springy though, a fine textural partner to the crisp sweet peas and bitter leaves. This octopus dish has real beauty where it counts – in your mouth.

Reach out and I’ll be there. Well, sometimes.

It initially seems quite odd for Kyseri to devote a precious slot on its small menu to sirloin in a city hardly short of good steak. It makes more sense when seen in perspective alongside the pastirma. If you’re going to cure rump on site, then you might as well serve up the neighbouring cut as well.

Although billed for two, a single person with a deep well of hunger can just about demolish the half-kilo of beef – and it’s certainly worth doing so. The expertly browned crust, quivering rim of fat and tender medallions of medium-rare flesh – pink-hued like a firmly-disciplined bottom – were all testaments to the kitchen’s attention to detail. 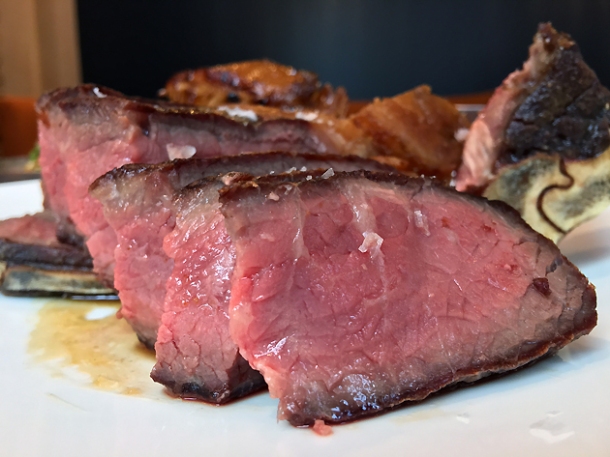 Slapped arse pink, just the way I like it. So to speak.

The tender sinewy ragu-like off-cuts were comparatively dull, livened up by the crunch of celery and onions. Far better were the fried soldiers of Turkish bread, the crisp sesame-flecked batons topped with a chive- and dripping-infused sour cream that sliced through the richness of the sirloin just as effectively as a steak knife.

The baked custard was served chilled, a welcome choice on a balmy, late spring evening. The eggy, creamy crème brulee-ish custard was a fine base for the crunchy, buttery and possibly almond-based biscuits and the cherries – even if the fruit were more remarkable for their plumpness than for their sweetness or sourness.

It was all over in a flash.

Despite the somewhat different hue this time around, the pastirma was just as good as it was before. 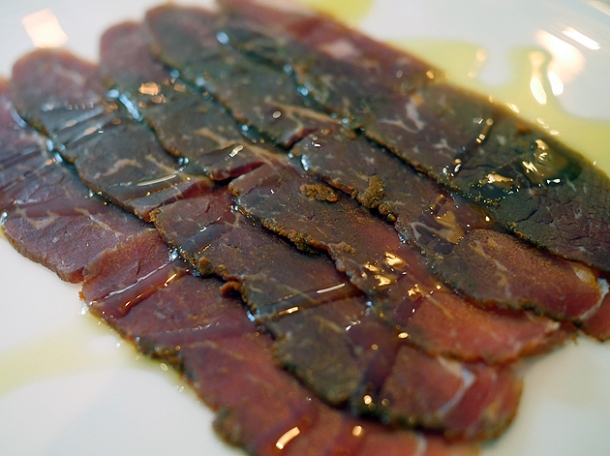 The dining room’s lighting can play interesting tricks with the colours of some dishes.

Snaggletooth, once a brisket devotee, is now a pescatarian/vegetarian. I’m breaking bread with a brisket apostate – what is the world coming to.

While pleasingly gooey and creamy in its own right, the fondue was small in size and only modestly different from any other 1970s throwback molten cheese dip you may have had. What really set it apart were the accompanying cubes of focaccia. The golden mantle was remarkably crisp, followed by an interior that was equally impressive in its airy lightness, tinged with bitter herbs and salty halloumi. Its cuboid shape didn’t lend itself well as an implement for scooping up cheese though. There are the makings of a stunning dish here; it just need a little more coaxing to help bring it to life.

Throw in a bowl for car keys and the 70s vibe would be complete.

Given the wealth of sumptuous Turkish baked goods, you shouldn’t be at all surprised by a Turkish restaurant knocking out bread this delightful.

Chopped egg noodles served with a feta-like cheese, a runny egg yolk and walnuts sounds like a muddled mish-mash, but it was actually delightfully moreish. All of the seemingly disparate elements came together beautifully, with each mouthful a rich, salty, nutty, slurpy joy. 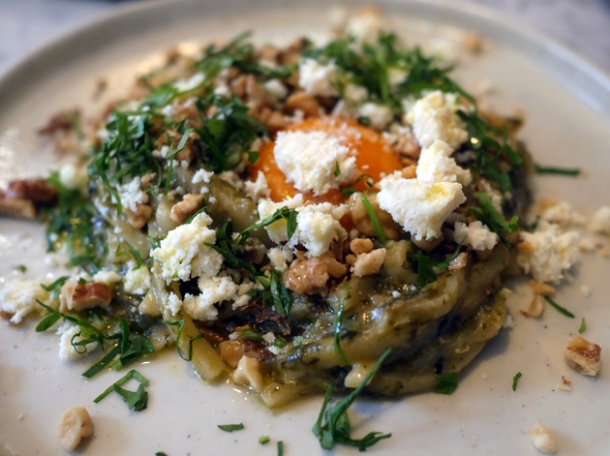 A halibut fillet was a dense, meaty pleasure tinged with a hint of zesty lemon – a far cry from the stodgy versions of this fish that blighted my misbegotten youth. The halibut didn’t just rely on its own charms to win me over, it sat on a bed of taut and bitter greens. The only disappointment here was the included side dish of pearl barley with za’tar butter and anchovy which reads better than it tasted. It came across as a mildly exotic quinoa with ideas above its station. 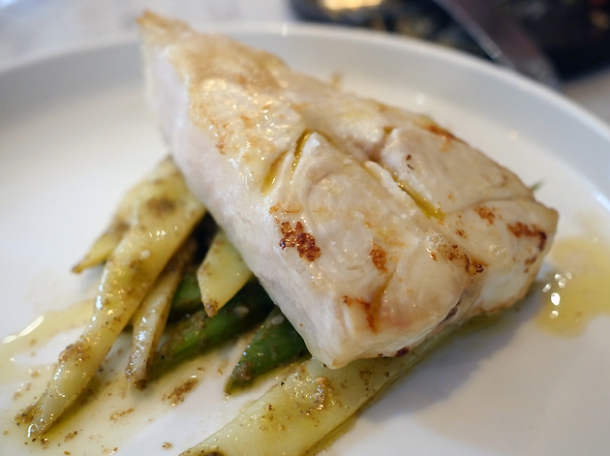 To the racist at the neighbouring table – shut the fuck up, fuck the fuck off and die slowly in agonizing, motherfucking pain. 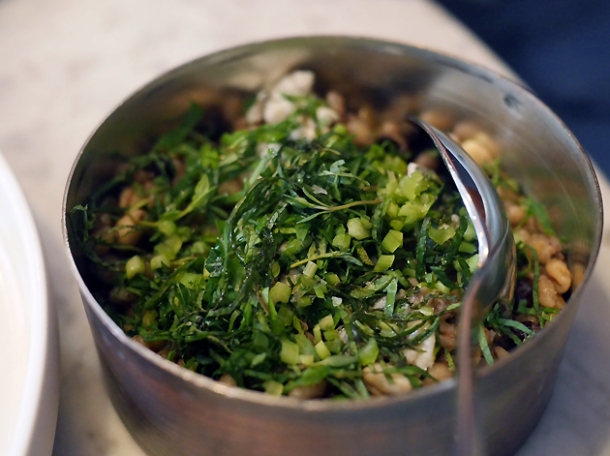 Rice-stuffed courgette flowers was all about the ample rice – once pierced by your fork, the fragile petals fell away and the sweet tomato-like umami of the fluffy rice took over. This was hardly a one-note dish though. A ratatouille-esque mélange of tender vegetables added another layer of sweetness and umami, with a smooth dollop of labneh-style yoghurt at the end cutting through all the richness. 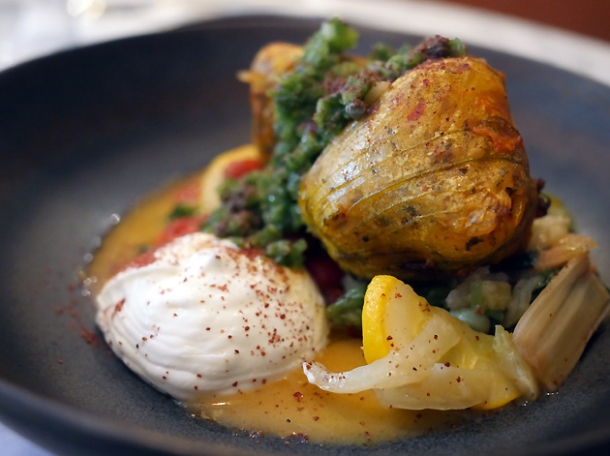 I would apologise for the sudden and repeated use of the F word, but I actually regret nothing. Racists in my town can get stuffed.

The pistachio katmer may look like a simple folded pastry in the photo below, but its assembly actually involved some elaborate tableside theatre. Our server had to use a series of paddles to place the cream-coloured mastic parfait in the middle of a sheet of pastry, before folding, slicing and plating the oozing flaps from her tableside cart.

Snaggletooth was largely taken with the vaguely pistachio-flavoured pastry, but I found it a little uneven – a tad too tough and leathery in places, much more pliable and elastic in others. We were also divided over the mastic parfait, with Snaggletooth less taken with it than I was. Although unmistakable in its floral bitter astringency, it was far less throat-stabbingly potent than the mastic-based desserts sometimes available at Peckham Bazaar and was further dampened into palatability by the pastry folds. As much as I cooed at the deft paddle-handling, this dessert ultimately feels too rough around the edges to recommend wholeheartedly.

In any case the tart and sour grapefruit on the side, dressed in a sweet and somewhat maple-like syrup, was a welcome palate cleanser. 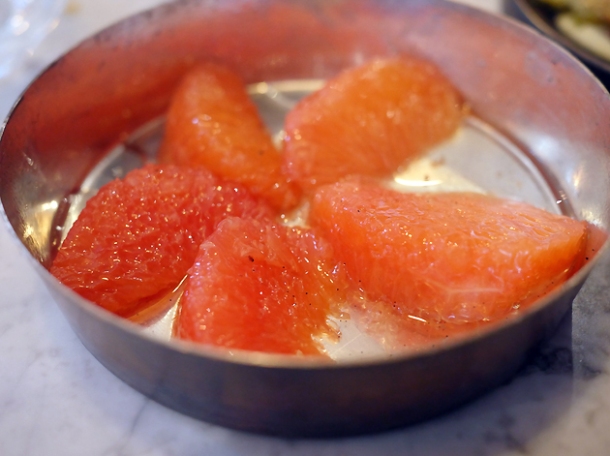 Kyseri’s culinary brilliance is matched only by its incongruous location, nestled amidst a clutch of no-name, seemingly always-empty yet somehow still open restaurants in the backstreets of Fitzrovia. While not perfect, it stills stands heads and shoulders – not only above its neighbours, but above other attempts at creative, modern, mold-breaking Turkish/north-eastern Mediterranean cooking such as the so-so Babaji Pide and the much more winsome Peckham Bazaar. Despite being booked-out online, this small restaurant was alarmingly empty across nearly all of my visits. I desperately hope this changes. Kyseri is a welcome reminder of the real Kayseri and its towering presence deserves to be shouted about from the top of some very tall hills indeed.

What to skip: Feta; perhaps the katmer

Average cost for one person including soft drinks and service charge: £70 approx.