It’s sort of like Turkish food, but even more fun

Thanks to UKIP and the generally nasty tone of British politics in recent years, ‘Eastern European’ has become a loaded phrase. Our new neighbours have nevertheless been slowly making their impact on London’s dining scene. ‘Eastern European’ food doesn’t have the greatest reputation though and that nebulous phrase obscures numerous, differing cuisines. Peckham Bazaar concentrates on dishes from the Balkans and Greece, which have a Turkish influence due to their shared history with the Ottoman Empire, but updated and modernised to surprisingly delicious effect.

Peckham Bazaar’s eclectic nature also extends to its premises and location. Situated on a quiet residential street in what was almost certainly a pub in a previous lifetime, the tightly spaced tables and dim lighting make for a cosy, intimate experience whether you want one or not. It’s a small place, with room for only 30 covers or so, making reservations essential on or around weekends.

The efficient service varied from stony-faced to friendly and warm. The kitchen had a little trouble across all of my visits in ensuring that dishes came out at an even pace, but the occasional drawn-out wait in between courses wasn’t too much of a hardship given the jovial atmosphere.

The menu changes almost daily, but no Turkish-inspired restaurant would be complete without a kebab. Peckham Bazaar’s version is decidedly un-halal, with both lamb and pork in the mix as well as prunes. The resulting adana was coarse, subtly sweet and of course very meaty with a hint of smoke too. The accompanying cabbage and ‘spicy’ adjika sauce were both rather tame, but the freekah more than made up for this. It had a sweet nuttiness to it and somehow managed to be both fluffy and coarse at the same time.

If you’re a Ukipper snagged in by my headline and are looking for a baseless scare story, may I direct you to the Daily Mail instead.

A dish of braised cuttlefish had an almost Italian feel to it. Orzo blackened with cuttlefish ink had a saltiness to it that complimented the thick, tender slices of mollusc well, while the soft fluffiness of the grain contrasted neatly with the texture of meat.

The inked orzo had an almost treacle-like quality to it which was surprisingly irresistible.

Imam Bayildi is a classic Ottoman dish of stuffed aubergine. The tender flesh of both aubergines and peppers were used here, although I would’ve preferred more eggplant. The filling of rice and umami tomato sauce was nonetheless satisfying as was the fleshiness of the aubergine while the smooth, creamy labneh added a refreshing touch.

Baklava is usually served by itself at other restaurants, but here it was but one part of a larger dessert. The layered parcels of pastry here were soft, honey-soaked and a little stodgy whereas I usually prefer my baklava a little crisper, flakier and more boldly flavoured too. It was joined by an inadequate supply of pomegranate and a more pleasing selection of persimmon slices. These delicately sweet, sometimes sharp-tasting slices of kaki varied in firmness, but nonetheless complimented both the baklava and the vaguely rosewater-flavoured ice cream well. There’s the core of a good dessert here, but a little more finesse in the individual components and in how they’re combined together would help this dish make more of a lasting impact.

The kitchen’s skill with the cuttlefish was no one-off fluke. It showed its seafood chops once more with the octopus – firm tentacles, lightly charred, with a slightly bitter, herby crust. It was joined by a thin yet creamy mash of fava beans in a moreish sauce topped off with sweet and tart onions. All these disparate elements meshed together beautifully.

Yes, there is actual octopus buried underneath all of that.

As the kitchen faces directly onto the dining room, fragrant smoke often wafts over the tables as an aphrodisiacal aroma. One beneficiary of this charcoal treatment was the slow-cooked rabbit leg. The charred and smoky crust of the firm, dense meat was made even better by a thin, moreish sauce. The bunny was neatly and humorously complimented by carrots with a honey-like sweetness and wrinky prunes which didn’t overwhelm the dish with their own treacly sweetness. The smooth, tart and refreshing labneh was hardly necessary as a result, but I’ll never say no to a well-made dollop of yoghurt.

Pull the other one.

After a stonking starter and dessert, things went down hill on this second meal with the dessert. The pan-fried goat’s cheese was unsurprisingly salty and tangy, but it took on a soggy bread-like effect when taken with the light and juicy rhubarb and orange. This was just as unpleasant as it sounds. The round cookie on the side was tightly crumbed, but bland. The elongated rosemary-flecked cookie was so tough and chewy, that it literally wasn’t worth the tooth effort. A joyless, disjointed dessert. 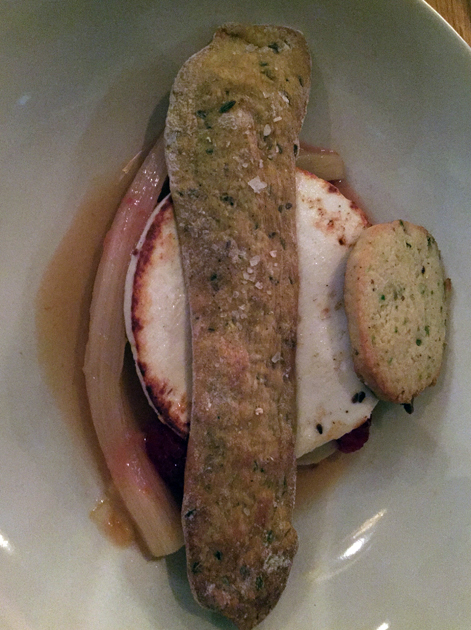 My second meal at Peckham Bazaar ended on such a sour note that I felt compelled to return for a third and final time to give the dessert crew another chance. Things got off to a cracking start. Prawns, cheese and tomatoes sounds like the haphazard results of a stevedore accident at the docks, but here it worked wonderfully. The zesty, zingy prawns were firm and served in a sauce that skilfully meshed sweet and umami tomatoes, sharp and tender peppers and hits of creamy cheese. The prawns added a salty bisque-like tang that made the deep, rich and layered sauce even more ecstatically enjoyable. 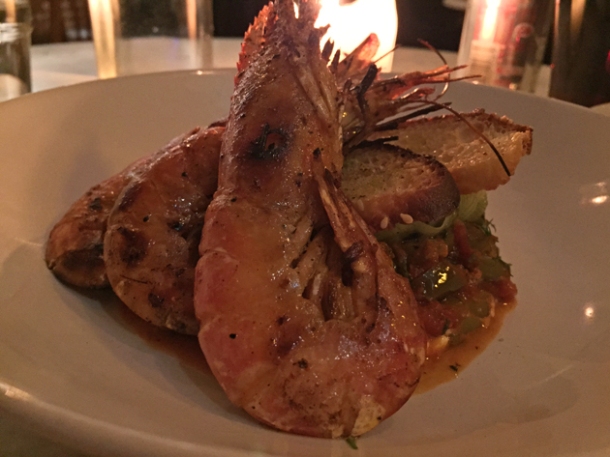 Even for an eclectic Eastern European/Turkish-esque restaurant, lamb rump sounds like the dullest dish possible. That couldn’t have been further from the truth. While the tender medallions of lamb, cooked rare/medium rare, could’ve been earthier the stellar sauce and accompaniments more than made up for this ultimately slight failing. Taut, slippery, slightly bitter fennel combined with large, buttery beans, zingy parsley and sharp red onions made this dish really sing. 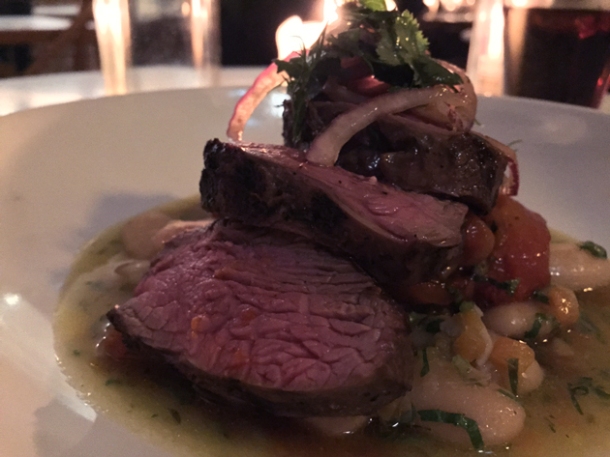 Can’t hold it in anymore.

I was wary about the cheese board due to the cheese disaster last time. Although I remain a committed Francophile when it comes to cheese, the selection of Greek cheeses here was still enjoyable. A chalky textured goat’s cheese was suitably earthy, while a hard cow’s milk cheese had a surprising and very pleasing pear-like fruitiness to it. The least successful of my trio was an immature comte-like hard cow’s milk cheese. The plum and almond preserve, served on the side, made the latter less dull but didn’t really suit the other two cheeses. 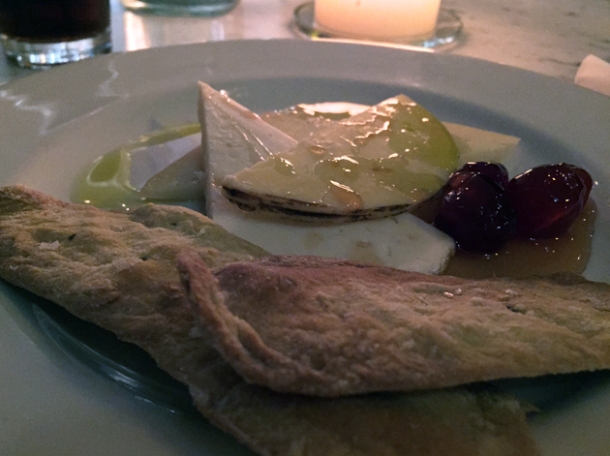 Hilariously, you can buy cow fuku (i.e. lungs) from the various butchers in Peckham.

Peckham Bazaar’s desserts and intimately cosy surroundings won’t suit everyone, while the kitchen’s pacing could do with some improvement too. These relatively minor quibbles are well worth putting up with though – the eclectic cooking, Eastern European or not, is more than delicious and varied enough to justify a trip out to Peckham. Cushtie.

What to order: Braised cuttlefish with orzo; grilled octopus; rabbit; prawns with tomatoes and peppers

What to skip: Pan-fried cheese

Reservations: highly recommended; essential on or around weekends

Average cost for one person including soft drinks: £30 approx.