Another reason to stop being so pissy about Shoreditch

London’s restaurant scene doesn’t stand still with an unstoppable cycle of new restaurants replacing old ones. Sometimes it’s for the worse, as when Charlotte Street’s Rasa Samudra, a very civilised Indian seafood restaurant, was replaced with a branch of Côte. A bloody, sodding, unforgivable Côte. Sometimes though, the gods of progress smile upon us. Chico Bandito in Shoredicth was a Tex-Mex restaurant with all the appeal of skin rash. It’s been thankfully replaced by Oklava, a Turkish-Cypriot restaurant.

The Turkish/Turkish-Cypriot menu has been given a contemporary twist, but that shouldn’t dissuade you from eating at Oklava. Indeed, it’s a very good reason to eat here as it’s quite unlike any other Turkish restaurant or kebab salon you or I will ever have come across. If nothing else, the minimalist decor and welcoming, efficient staff make it a far cry from the chintz and brusqueness of many other Turkish restaurants.

Sucuk, or beef sausage, is a common staple in Turkish restaurants. Here it’s called pastirma, lightly charred and sliced into segments. Dense and coarse, it’s not that different from sucuk elsewhere. Plus I couldn’t help but be disappointed that it wasn’t Kayseri-style pastirma instead (a different and utterly joyous thing at its best). Still, you could do far worse as snacks go.

An oklava, in case you’re wondering, is apparently a Turkish rolling pin.

I was surprised to find a pide topped with octopus at Oklava. The soft but nonetheless evocatively salty and zingy octopus segments were best enjoyed on their own away from the rest of the pide as the other toppings tended to smother the octopus. The punchy capers and milky ricotta blended together beautifully on top of the pillowy soft dough and were perfectly good sans-octopus. Although I forgot to snap a photo, the accompanying side salad of leaves, pickles, red onions, hot peppers and more shouldn’t be ignored. Tart and refreshing, it’s a reminder of just how good salads can be.

All the pides come on these huge, impractical and unwieldy oven boards. An accident just waiting to happen. 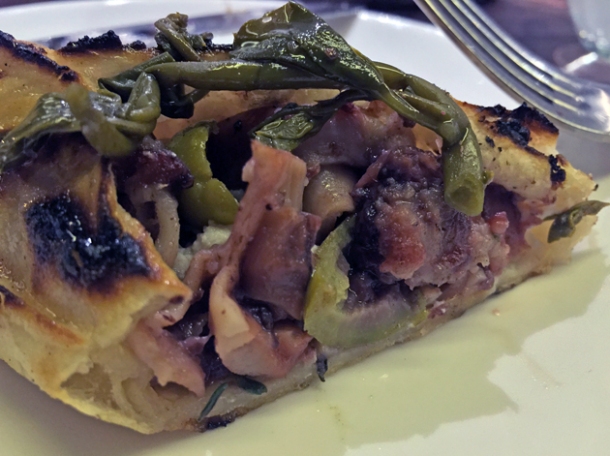 I could’ve sworn Chico Bandito had more covers than Oklava now does.

Another intensely pleasurable, if somewhat disjointed seafood dish was the monkfish. The monkfish itself was firm and zingy fresh, but the accompaniments didn’t really suit it. The combination of an XO-style sauce, grapefruit and coriander were surprisingly complimentary with each other as the mild spice segued neatly into the sharp citrus, but it just didn’t compliment the monkfish. 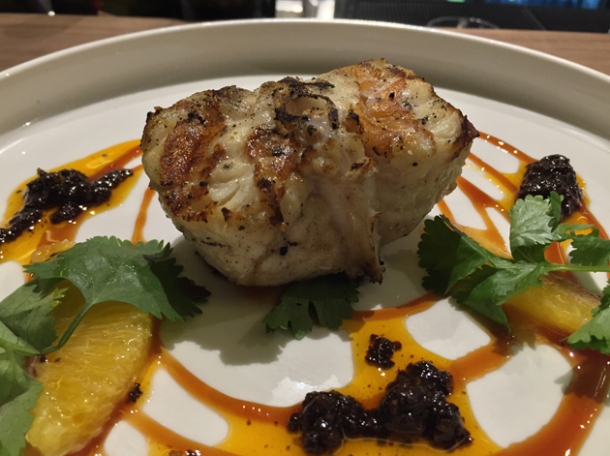 Why isn’t there a nunfish?

There’s no doubting the crispy pomegrante-glazed lamb though. The unctuously fatty and earthy lamb meat was topped with wonderfully crisp skin. The seductive texture of the meat was neatly complimented by the light treacle-like sweetness of the pomegranate sauce. Although it wasn’t excessively rich, a hefty plop of thick and refreshing yoghurt was on hand anyway. If there’s one lamb dish that could ever topple kebabs from their place at the top of my affections, then it’s either this or the lamb ribs sometimes available at The Smoking Goat.

After all those relatively heavy meaty mains, a refreshing dessert was definitely in order. The parfait was superb, but not in the way I expected. The custardy-creamy base was fluffy and airy with a light sweetness. Perched on top was a gently, expertly poached pear half and dolma-shaped fried doughnuts, but light and oil-free. All of this would have been delightful as is, but this dessert was taken to new heights by the pear-flavoured granita. Not only did it have the distinctive taste of pear, it had a remarkable texture which somehow segued from light iciness to bread-like chewiness. At the risk of overselling this dessert, I was left humbled and astonished.

You can take your molten chocolate whatevers and shove it.

Even if you’re a determined die-hard salad dodger, you’ll want to try the barley salad at Oklava. Although I couldn’t detect any of the promised sour cherry, the fluffy soft barley morsels did have an occasional honey-like sweetness which went well with the modestly creamy sheep’s cheese. The parched, wrinkly and fragile kale leaves won’t be to everyone’s taste though.

A special mention has to go to the bread at Oklava. Or, more precisely, the spread that comes with your bread – medjool date butter. Its rich buttery syrupy sweetness is so good, it’s probably illegal in some jurisdictions.

Pide and lamahcun are often described as ‘Turkish pizzas’ which is a crude analogy at best, but that description seems oddly apt in the case of Oklava’s beef short rib pide. The combination of umami tomato sauce and creamy yoghurt was oddly pizza-like – at least until the tingly, mildly spicy heat kicked in. It was a delicious combination, especially with the slices of tender, unctous and meaty short rib mixed in. The big disappointment here was the dough which was stodiger and crunchier than it was in the octopus pide. The other let down was the accompanying side salad. While consisting of the same components as the salad that accompanied the octopus pide, it was so heavily refrigerated that it was painfully cold to eat.

Babaji Pide eat your heart out.

The seftali could be classified as either a kebab or a sausage – either way, it’s worth killing for. The finely ground beef stuffed into a fatty caul covering had an airy, tenderly offal quality that was also satisfyingly meaty. The thin and soft lavash flatbread was perfect for conveying the seftali into my rapacious gob as they blended into the background, staying out of the meat’s way. The tart red onion salad topped with sumac was a refreshing accompaniment. 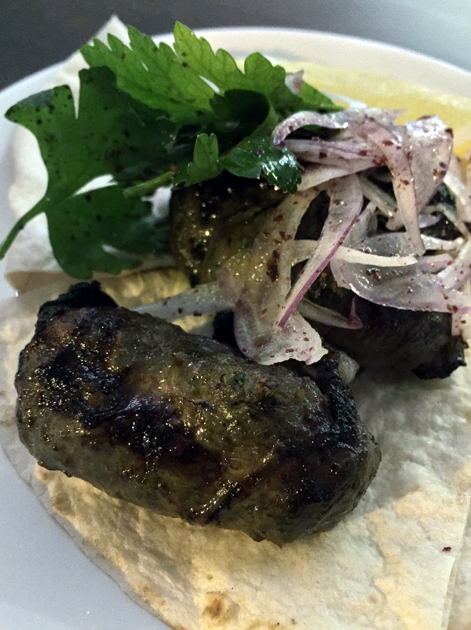 The perfectly crisp crackling on top of the rice pudding creme brulee would make any Frenchmen proud, but the surprisingly shallow layer of rice pudding underneath was disappointing. The candied pineapple and lime pieces were surprisingly muted, as were the pistachio crumbs and rum jelly cubes. This dessert wasn’t too bad overall, but rice pudding is typically a comfort food and this version doesn’t have that warming dive in and gorge quality.

This puddin’ just didn’t rev me up.

Snaggletooth doesn’t usually need much persuading to assist me in trying out a restaurant, especially when there’s charred meat involved. He’s more than capable of appreciating a good salad or vegetable dish though and enjoyed the oddly-named ‘marinated and candied’ aubergine purée. Fleshy, umami and lightly tart pieces of eggplant were joined by a smooth baba ghanoush-style puree that had the vegetable’s distinctive taste but not the smokiness usually found in a good baba ghanoush. It was pleasing enough when taken with the accompaniments here though, from the bitter leaves to the crunchy almonds and dabs of lightly creamy yoghurt.

Today’s procrastination was brought to you by Lou Reed.

Although not a disguised egg and potato hash as I had first suspected, the baked lamb fat potatoes nonetheless felt very much like a breakfast dish – albeit a somewhat elaborate one. The dauphinoise-like layers of thinly sliced potato had a mildly meaty undertone, but slices of halloumi on top and the fried duck egg were both surprisingly tame. While the yolk was at least very runny, that couldn’t stop this dish from feeling very lacklustre.

There are dauphinoise-style potatoes under all of that, I swear.

Despite having lived within spitting distance of Green Lanes for years, Snaggletooth somehow never had a lahmacun. While the version here had a pitch perfect base, all crisp, charred and light, the toppings were wanting. The diced lamb lacked meatiness, the diced tomatoes weren’t umami enough and there wasn’t nearly enough parsley. Given all this, it was best used as a wrap around for the included side salad which, thankfully, wasn’t the overly refrigerated mess from my second visit but the crisp, tart and refreshing mix from my first.

Don’t call it a Turkish pizza.

Although the small heap of prawns were firm, fresh and reasonably zingy, the garlic and chilli sauce only had a very mild, cumulative heat at best and were thus a liability to these crustaceans rather than a boon. 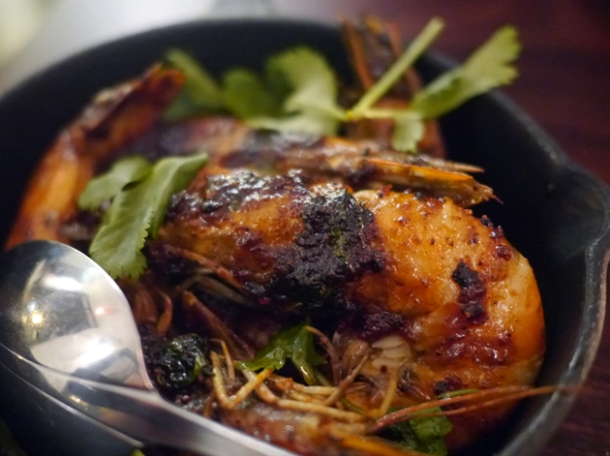 Somewhere in the Mediterranean or southeast Asia is a far better version of this dish.

Things picked up on more obviously familiar Turkish territory. The smooth exterior of the lamb koftes gave way to reveal a coarse, finely minced, airy yet pleasingly meaty texture. The sliced kofte pieces were wrapped in the same high quality lavash that accompanied the seftali and stayed out of the meat’s way. The kofte was made even better by the creamy yoghurt and the lightly fruity and spicy sour cherry dressing.

As good as the kofte was, it was promptly overshadowed by the lamb cutlets. Although not especially earthy, this was soon forgotten in light of the cutlets’ moist meatiness, the occasional fatty seam of connective tissue and the surprisingly fruity undertone.

Judge me by my size, do you?

A lot of chocolate desserts tend to be safe, boring, bland and lazily made, so I was pleasantly surprised by Oklava’s chocolate and cardamom delice. The smooth and dark flourless chocolate cake slice had a surprising smokiness that was neatly complimented by the syrupy prunes on the side. The wispy and distinctly flavoured bergamot cream and crisp cardamom wafer added neatly crafted contrasts in both taste and texture. Superb. 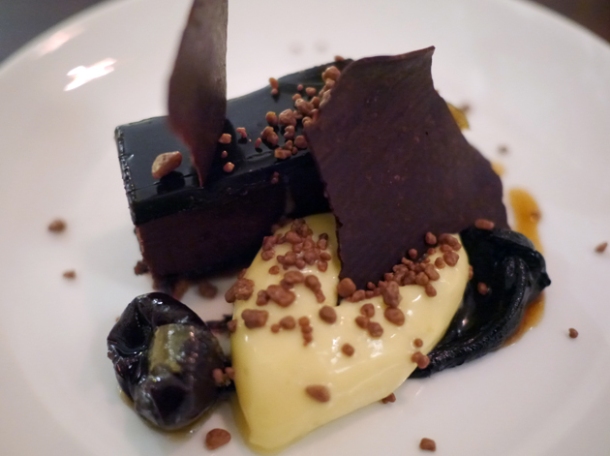 Chocolate worthy of the name.

Snaggletooth fared less well in his dessert choice – the reasonably moist pistachio sponge tasted only so-so. Far better were the rosemary-flecked filo wafers and the astonishingly smoky, sweet and sharp pieces of quivering quince. Given the presence of both pistachio and filo, this felt like an ultimately unsuccessful remix of a baklava. Just give me more of the quince.

I’d love to be able to say that Oklava is such a runaway, iconoclastic success that it overturns all our expectations and conceptions of what Turkish/Turkish-Cypriot cuisine is and can be. Unfortunately, that can’t be said while the best things on the menu are still very clearly the lamb and other meat dishes that hew closest to tradition. Even so, that’s a good problem to have – the meaty mains were expertly crafted. Plus there are glimpses of potential genre-shattering brilliance from the pides and the crispy pomegrante lamb to the parfait and the delice. All of this makes the occasional disappointing duffers easier to bear. Oklava isn’t yet the consistently well-executed barnstormer everyone else thinks it is – but it’s not far off. Go now, before it becomes even harder to get a table.

Reservations: essential for dinner; probably a good idea for lunch.

Average cost for one person including soft drinks and service: £40-45 approx.