How Not To Do A Barbecue Restaurant

Expectations, prejudices and other pre-conceived notions can cloud your judgement, which is why I try to be as open-minded as possible when reviewing restaurants. Trying to do so when walking through the door at Grillstock Walthamstow was difficult though. My Bristol-based chums had waxed lyrical about the original branches of this West Country barbecue mini chain. This enthusiasm, which engendered an expectation of greatness, only made the dreary reality all the more disappointing.

Even if the Walthamstow branch of Grillstock wasn’t located inside a new, glossy retail complex, the faux-ramshackle decor was too polished to be convincing. More problematic, but not disastrously so, was the service. One put-upon waitress struggled to grapple with a dining room that was around 1/5 full. Oddly, when an extra server finally turned up and pitched in, service slowed down rather than sped up.

Snaggletooth accompanied me to Grillstock so we could tackle the Grand Champion together, a huge platter bringing together all of the restaurant’s core American barbecue staples, plus some of the side dishes, into one sitting.

The pulled pork turned out to be one of Grillstock’s better dishes. This was alarming as the pulled pork, while firm and lightly vinegary, was also far too dry. Compared to other, better balanced pulled porks, it’s merely satisfactory. 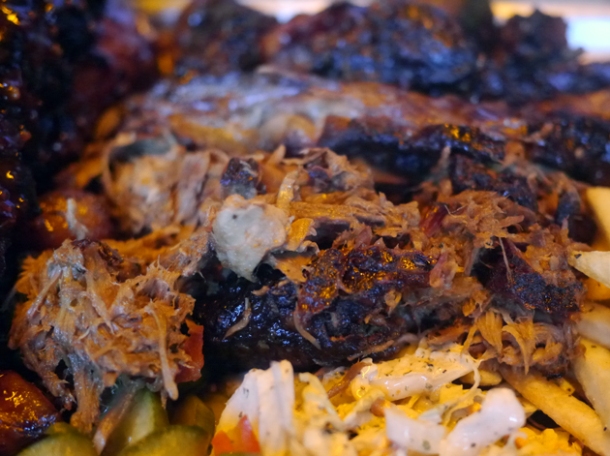 The beef brisket looked deformed – narrow strips of twisted, deformed flesh that somehow managed to lack both meat and fat. While moist, the stunted brisket was deeply lacking in depth of flavour.

Only marginally less disastrous were the burnt ends. Far too dry and a little too tough, these little beef nuggets were entirely dependent on the sweet, sticky sauce for flavour. When burnt ends become this too far gone, you dump it and take them off the menu for the evening – not serve it up with sauce for camouflage. 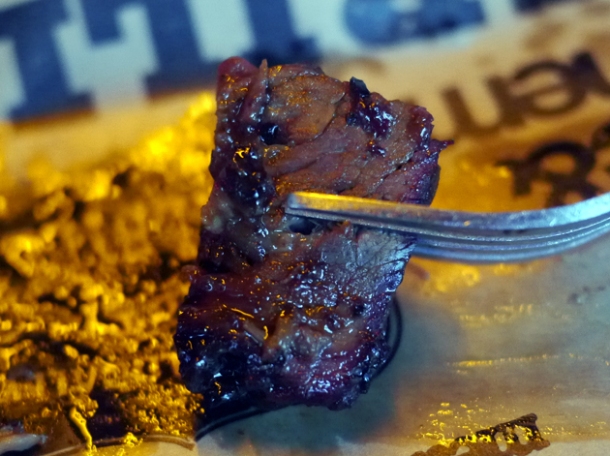 The fatuously superficial will be impressed by the sheer size of the baby back ribs. Although the fruity wet rub on the surface was enjoyable enough, the hard, bland meat underneath most definitely was not. Lacking in smoke, or indeed any character whatsoever, it’s fit only for consumption by a yappy, overexcitable dog.

We control the vertical…

Even the chicken, the predictable and dependable meat of choice for children, somehow managed to underwhelm. Although the slippery, lightly moreish skin promised some sort of poultry salvation, the moist and firm meat underneath was so tasteless that, for a brief moment, it was difficult to tell if I was indeed eating chicken and not some impostor.

What did Walthamstow ever do to deserve this?

The sides somehow managed to be even worse than the meaty mains. The pickles, coleslaw and bread rolls had probably been cooling their heels in a supermarket aisle mere minutes before arriving at our table. 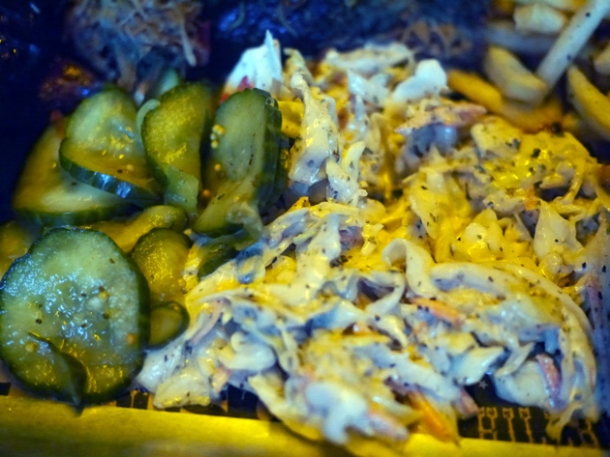 Yes, the colours are a little weird. Blame the odd lighting.

I could probably use the barbecue beans to heat my flat. The tub of beans somehow managed to remain piping, steamingly hot throughout the course of our meal. The forgettable beans and the random, formless meat mixed into them certainly weren’t worth burning my mouth for. 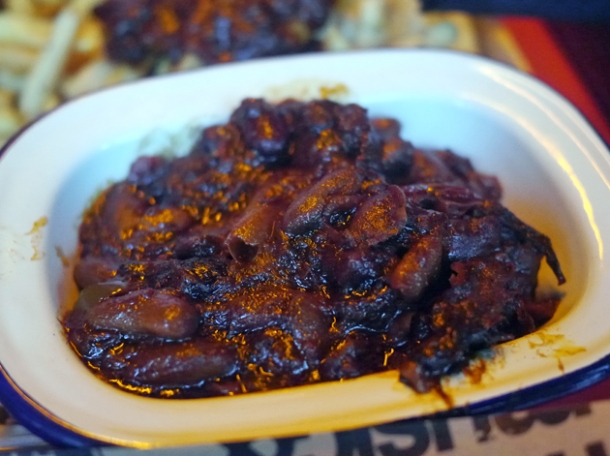 I’m not sure which part of the chilli cheese fries offends me more. The floppy, bitty fries, the limp melted cheese or the bland minced meat.

It’s a sad meal indeed where the macaroni and cheese is one of the best dishes going. Although lacking a crispy crust, the firm pasta shells and creamy cheese sauce made this a fine example of the cheap, comfort food classic.

If you’ve been paying attention until now, then a summary is hardly necessary. Grillstock served up some of the worst American barbecue that I’ve had the displeasure of eating in London. So much so, that I actually had trouble believing that the kitchen could’ve gotten so many things wrong so badly. I’d rather take my chances in a Wetherspoon’s then dignify this abomination with my custom.

Total cost for one person including soft drinks but excluding tip: £40 approx.