Oaxaca may be best known to Londoners, if it’s known at all, as the inspiration behind the name of London mini-chain Wahaca. But this city in southwestern Mexico has a rich culinary tradition that’s barely touched upon in Wahaca’s menu. I got a taste of it in the city’s bustling market which has so many street food vendors that, at some of them, you could literally sit with your rear end facing perilously into traffic while scoffing down expertly caramelised pork tacos. As rewarding as Oaxaca’s market can be, I therefore ended up spending just as many nights eating at the more touristy Casa Oaxaca. This restaurant is located in the historic northern part of the city and has an atmospherically lit rooftop dining area which is good not only for observing the genteel bustle of the historic centre beneath you, but also for appreciating the frequently beautiful twilight over the Sierra Madre mountain range ringing the city.

The one rooftop vista photo that came out looking OK-ish. Le sigh.

The English-speaking staff can, to put it mildly, be a bit on the slow side. But what really irked me was a very small thing that shows a lack of attention to detail – and at this price (which is expensive for this part of Mexico), details matter. The al fresco rooftop tables are made from wooden slats – similar to what you might find on a garden or patio table. Annoyingly, the wooden slats are wide enough that if you drop a utensil, or just place it down clumsily, it will fall through to the slats onto the floor necessitating a replacement. It’s a small thing that you could blame on my own cack-handedness, but a large enough quantity of small things can make or break a restaurant experience.

Although the fried quesadilla came topped with a who’s who of classic Oaxacan ingredients, from corn fungus to string cheese, grasshoppers, pork rind and guacamole, it was a surprisingly tame and uninteresting affair. The fried grasshoppers and pork rind got lost in the mix which was dominated by the Oaxacan cheese with its distinctive mozzarella-esque stringiness and mild saltiness vaguely reminiscient of halloumi. I’ve fallen in love with Oaxacan cheese, but it hogged the limelight here. Grasshoppers are best experienced on their own and can be bought fried in spices, or just plain, at Oaxaca’s market.

Cooking soup by placing red hot stones, warmed by fire, directly into the liquid is a local technique predating the vicious Spanish Conquest. Prepared tableside, the chunks of fresh shrimp, octopus and meaty white fish were made even better by reasonably hefty fistfuls of garlic, tomato and chilli. I found it best to give it an extra stir before eating though, distributing the mix more evenly. 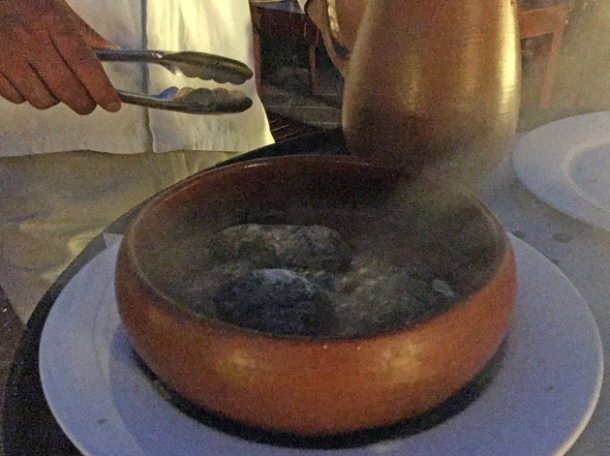 Sorry for the iffy photos, folks.

Billowing steam and low light are not ideal conditions for a phone camera.

Casa Oaxaca’s suckling pig wasn’t tender or fatty enough and there wasn’t enough crackling either. The accompanying chayote was pleasingly firm though, while the green mole was similar to the one I encountered at Kaah Siis in Mexico City – teasing the tongue with all the flavour and sensation of chilli without bursting into the fiery spice that some people can’t handle. The chayote proved to be far better than the disappointing pork for spooning this lovely sauce into my mouth. The less said about the disappointing tortillas, the better. 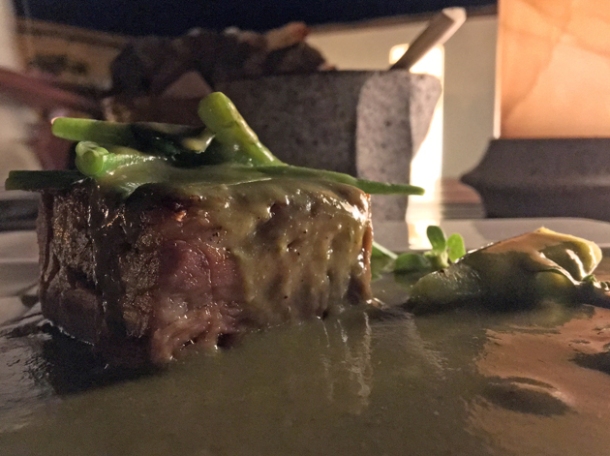 A disappointing effort for the homeland of chocolate.

Tlayudas are a bit like quesadillas, but consist of a single whopper of a tortilla topped with ingredients, in the manner of a pizza, rather than having the ingredients sandwiched between two smaller tortillas or filling a tortilla folded in a half. Crisp and not too stodgy, the huge tortilla was topped with a heaving monster truck portion of ingredients including crisp and sharp vegetables, Oaxacan cheese and tender, smoky strips of rib eye beef cooked medium rare. It was a lovely, hearty dish but it was enough to feed an SUV full of fat Americans. Even my notoriously voluminous appetite had trouble accommodating this beast and everything else I had ordered. 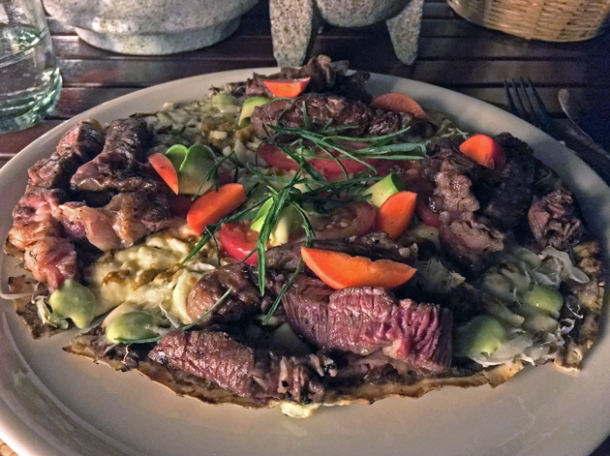 Given the mammoth tlayuda, my veal stew main turned out to be lighter than my starter! Lightly earthy medallions of veal ranged in texture from smooth to coarse and were dressed in a moreish if only mildly nutty mole. The accompanying rice and tortillas left me unmoved.

Not what I imagined a stew would look like.

Given some of the wonderful chocolate available in Mexico, Casa Oaxaca’s parade of shrug-inducing chocolate desserts was disappointing. When the most interesting part of a housetrained chocolate cake was the booze-soaked underlayer then something has gone seriously wrong.

Putting aside the dreary desserts, there are some good dishes to be teased out of Casa Oaxaca’s menu but you’ll have to dodge some duds along the way. In the end you’re paying for its serene rooftop setting more than anything else. It’s a good-enough experience, but I don’t think it’s too much of an ask to want both a view and some cracking food in a single effortless experience without compromising on one or the other.

What to skip: The chocolate desserts

Reservations: probably a good idea; essential for a rooftop table