Who says vegetarian food has to be boring?

I’ve shamefully neglected to cover vegetarian restaurants on this blog despite the fact that two of my most trusted dining companions, The Flame Haired Squelchie and The Prancing Hippy, are vegetarians. That’s easy enough to rectify though as London has a respectable selection of vegetarian eateries, including Orchard, a spin-off of the more formal Vanilla Black.

Although Orchard is open for both breakfast and lunch, the place is only open until 8pm so if you want to eat dinner you’ll have to get there early. That didn’t deter the Squelchie and I from eating at Orchard shortly after it had opened. The small, discretely sign-posted establishment is located on Sicilian Avenue, a vaguely Italianate street not far from Holborn Tube station. The management hasn’t aped the Mediterranean aspirations of its location though, going for a bare, kitchen-like decor. Service was chatty, polite and efficient.

Orchards do bloom, even in winter time.

I was content to quench my thirst with some pear juice which was gently sharp and sweet, but with none of the cloying sweetness which blights some lesser pear juices. The Squelchie quaffed down a few glasses of Limney Horsemorden 2008-2009, an English white wine which she found to be refreshing, light and crisp without being too acidic. 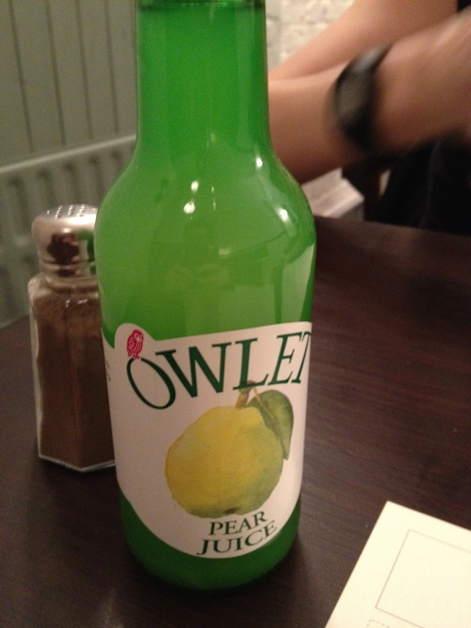 The menu is very short with a rotating selection of daily specials. Both the Squelchie and I had the same starter of celeriac soup and we were both very pleased with its sharp, creamy taste. The crunchy chestnuts added a bit of texture, but their flavour was a little muted – walnut oil may be a better way of adding a more strident nuttiness. The accompanying brown bread was fluffy, but the hard, refrigerated butter should’ve been rested at room temperature before serving. 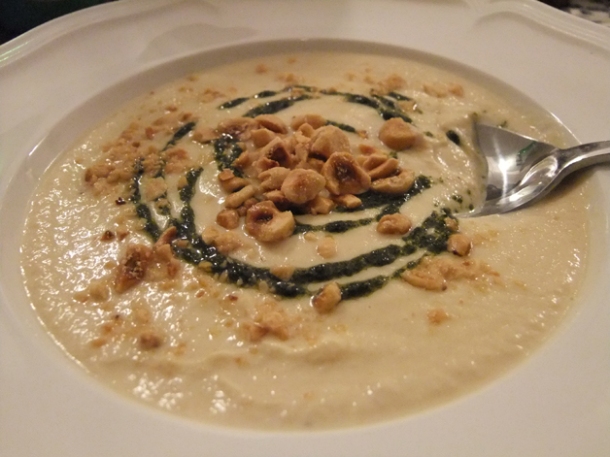 The Squelchie isn’t a vegan so she had no qualms with the Yorkshire cheddar and cabbage pudding served with potatoes, more creamed celeriac and a drizzling of red wine. The idea of Yorkshire cheddar may offend Somerset loyalists, but the sharp, mature taste of the fluffy square of cheese was warming, tasty and complimented well by its firm cabbage wrapping. I wasn’t sure what the point of the red wine was, but the potatoes added some much needed carbohydrates.

I could’ve done with some extra carbs with my main course of roasted broccoli served with pickled mushrooms, white beans and braised swede. The dish could also have done with a unifying element to tie together its disparate elements, but that shouldn’t detract from how tasty the dish was. The soft, yet moreishly tangy broccoli was very satisfying and was complimented well by the slightly soft, buttery beans and the sweet potato-like flavour of the golden swede chunks. The pickled mushrooms weren’t as boldly flavoured as their counterparts at Pitt Cue, although that’s a rather unfair comparison given how vegetarian unfriendly Pitt Cue is. Still, I could happily have eaten a second helping of this dish and perhaps even a third.

I was mildly worried by the moans of pleasure coming from the Squelchie’s end of the table as she wolfed down her pudding of winter fruit stew with whipped cinnamon cream. I’m not usually a fan of whipped cream, but I’d happily make an exception for the distinctly spiced version here which complimented the sharp, syrupy sweetness of the stewed apples and pears.

My own dessert wasn’t a disappointment. The golden syrup pudding had a fluffy yet dense scone-like texture with a strong brown sugar-like taste indicative of a generous measure of golden syrup. The cream is described on the menu as ‘burnt satsuma’, but the muted zestiness wasn’t as striking as that evocative description. The small dollops of the sharp and very tangy quince jelly turned out to be the perfect accompaniment to the golden syrup pudding and I only wish there had been more of it. 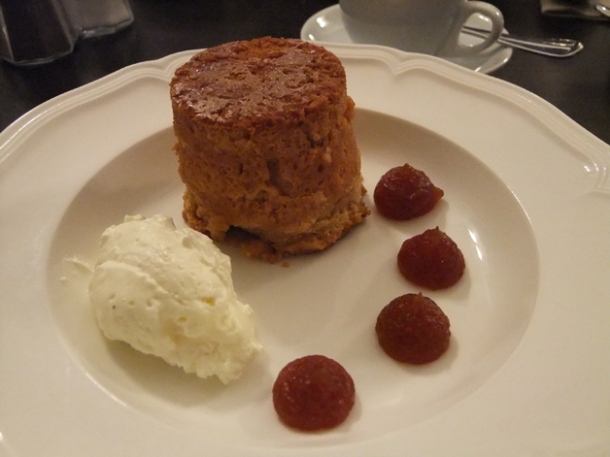 The deceptively simple food at Orchard is delicious and reasonably priced too. There’s a danger that the very short menu may grow tiring after a while, but I’d rather run that risk than deal with an unwieldy menu of mediocrity. My only real wish is that this humble little eatery was open for longer in the evenings. Despite its quality, bigoted carnivores will probably give Orchard a wide berth but that only leaves more room for the rest of us.

Total cost for one person including coffee: £21 approx. (£33 approx. including alcohol)

Updated July 2013 with links to new website and Square Meal