What’s the point of all this?

Fine dining used to be so easy to identify. The opulently decorated dining rooms, the tablecloths, the suited and booted staff – and that was just the physical environment, never mind the hushed aura. Then there was the food, itself a world apart from what most of us ate every day. From emulsions and luxuriantly glossy sauces to exotic ingredients and complicated-sounding techniques, everything was unmistakably special.

But thanks to our post-Recession, austerity-blighted era of stagnant wages in which eating out has had to become more accessible and sociable, fine dining has wrestled with how to present itself. Some gastropalaces look more like bistros and brasseries, while fussy and ornate dish presentations are out of fashion, all attempts to look and be more accessible.

But that’s arguably not enough, addressing only the superficial issues. Any restaurant worth its salt is now expected to use the best possible ingredients and precision techniques, not just those at the high end. That puts even more pressure on fine dining restaurants to up their game. But by following, say, the Nordic-esque model of foraging hyper-seasonal ingredients, they risk being seen as spendy, out-of-touch and out-of-reach. 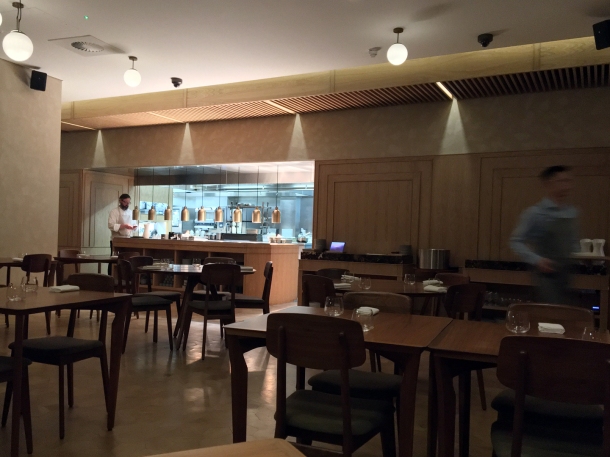 Trivet, which sits in the premises once occupied by the barely remembered Londrino, retains the formal, wordy introductions to its a la carte-only dishes but could otherwise be mistaken for a glossier-than-usual neighbourhood restaurant. Its pre-launch hype was based largely around the CVs of its staff as a proxy for what to expect on the plate – Fat Duck here and Fat Duck there. Anyone outside the twitchy world of restaurant bothering would be forgiven for struggling to care.

That would be missing the point.

I don’t know what the randomly positioned knick-knacks on the shelves are for, either.

Trivet’s slices of sourdough shouldn’t be ignored. Both the crusts, with their raisin-like flavour, and the soft and tangy fluff underneath were improved even further after slathering each slice with the wispy butter and its lactic tang. 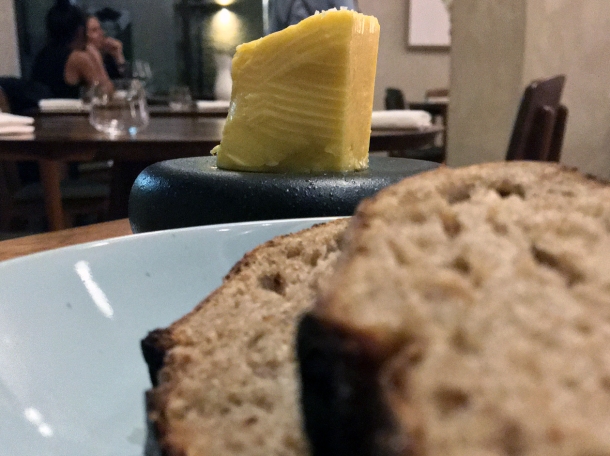 Aesthetically pleasing photos are, I hope you’ve noticed, a bread-and-butter part of this website alongside the well-written words and carefully deliberated star ratings.

Surprisingly crisp artichokes came in a lightly earthy broth apparently made from sourdough. While far from charmless, it was a very genteel starter – especially given the oddly unaromatic shavings of truffle – so it’s best taken as a precursor to one of the bolder main courses.

Creamy, delicately soft veal sweetbreads didn’t just depend on their velvety texture for their edible charm. The hints of smoke in each organ melded surprisingly well with the cranberry-esque sweetness of the sticky sauce, producing an unexpectedly well-balanced starter. 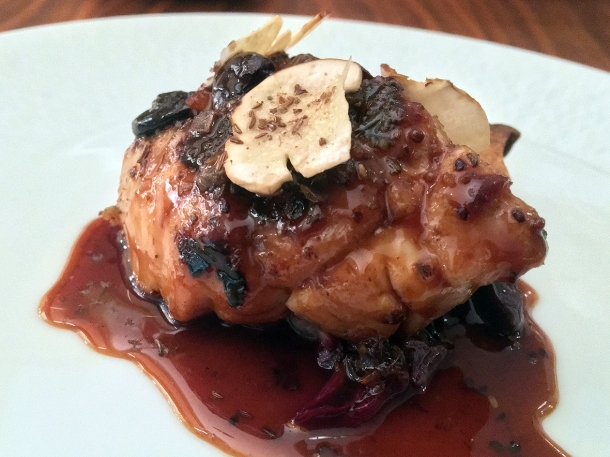 A delicately savoury stuffed biscuit had a familiar taste that I couldn’t quite place until it suddenly hit me. It tasted like a cheese and onion crisp, an unexpected resemblance – given the context – bolstered even further by a somewhat tangy and moreish mayo. The caviar didn’t add much, but the kelp salad did effectively cleanse the palate, even though this starter wasn’t potent enough to really need it. A somewhat overwrought starter, but it ultimately fulfilled its role – it left me eager to devour more. 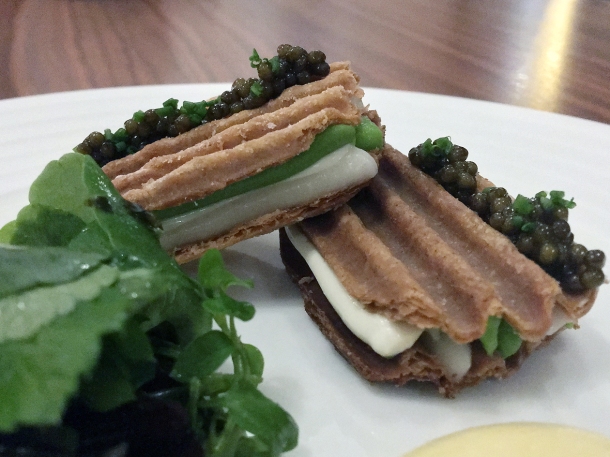 I expect Gary Lineker will be making an appearance at any moment,

Pici was thick and round-sided with the string pasta neatly straddling the line between firmness and softness. It was a fine backdrop for the buttery, almost emulsion-like sauce as well as for the meaty, lightly salty charms of the mullet.

but without the mullet.

Baron Greenback predictably opted for chicken as his main. While the poultry was smoothly meaty, it was an ultimately forgettable series of mouthfuls hardly elevated by the lightly tart vinegar sauce. 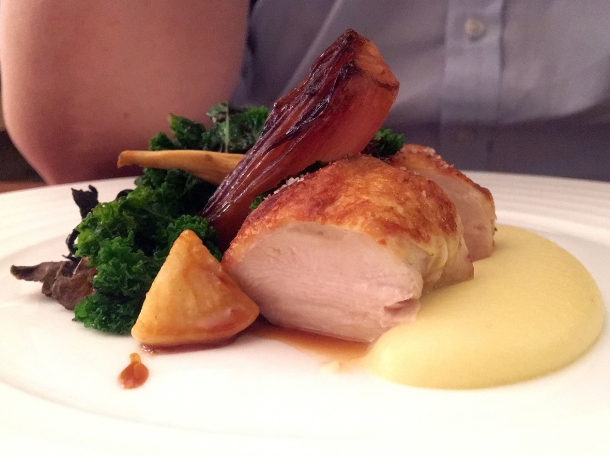 I didn’t know this place had a kid’s menu.

Steamed turbot was far more entrancing. The delicate flakes of milky fish came draped in a nutty sweet sauce occasionally pepped up even further by hits of tarragon. An utterly beguiling fish dish.

It’s surprisingly difficult to colour correct an image in Photoshop when there are both white and beige elements in the frame. Difficult for me, at any rate.

Roasted pigeon breast had a peppery crust, but it was far too transient to leave much of an impression. Thankfully, the meat underneath was far more impressive. Evenly and consistently tender throughout with a rich purple hue, it was the succulently sultry and far more desirable counterpart to the frumpy chicken. This only made the clumsy accompaniments all the more disappointing though. Distinctively sweet slices of persimmon felt out of place, as did the crunchy sausage even though it was made out of other bits of pigeon. Chervil root was reminiscent of celeriac, but not as characterful. A classy bird smothered by an entourage of unworthy hangers-on.

This review’s procrastination was brought to you, in part, by Mark Kermode’s review of the latest Paw Patrol movie.

Although the iberico pluma came with a beetroot sauce just to the side, the pork was best appreciated on its own. Even though the beetroot sauce was only lightly earthy and tangy, it was still potent enough to overwhelm the dense, woody and meaty charms of the pig. The sauce was best reserved for the otherwise humdrum crackling and the veg which was unexpectedly reminiscent of collard greens. 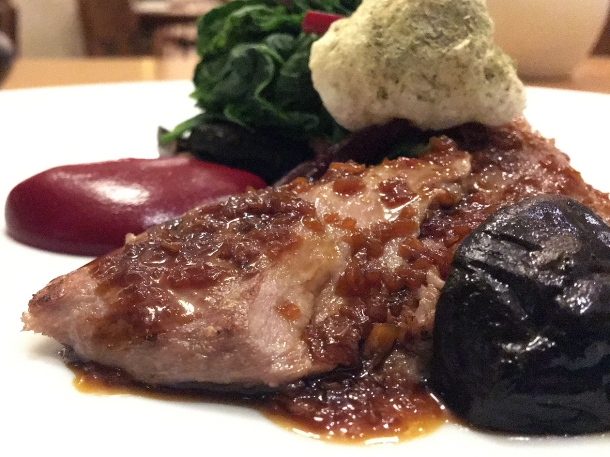 A mille feuille made with ‘Hokkaido potato’ sounds like a recipe for indigestion rather than an appealing dessert, but this dish turned out to be far more sedate than its avant-garde menu description would have you think. The top layer of squared tuber was delicately sweet and starchy, barely identifiable as potato. It was do subtle, it’s unlikely to offend or startle anybody – especially those vehemently opposed to savoury foodstuffs in sweet things and vice versa. The crisp layers of thin pastry underneath were almost as wispy in their fragility. If it wasn’t for the refreshing ice cream on the side with its boozy acidic tang, this wilting wallflower of a dessert would barely have made an impression. This wasn’t a real dessert, but a placebo for people easily convinced by intricately worded menu descriptions and waifish wellness wenches worried that the slightest hint of flavour and sugar will send them into a downward spiral of bloated decadence. 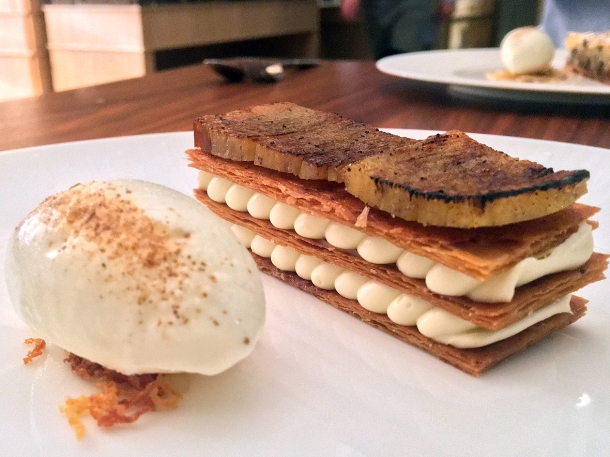 The almond and cherry tart was less cherry bakewell and more like a French frangipane. The forgettable pastry held a gently sugary confection that was more marzipan-ish in its almond flavour with not enough cherry on the tongue. It was smooth and surprisingly refreshing, especially when taken with the somewhat cardamom-flavoured gelato on the side. Not bad.

Well, at least it’s not Mr Kipling and for that we can be grateful.

A crisp meringue cylinder tinged with hints of bittersweet orange was let down by its feeble-tasting filling of chestnut cream and a biscuit base with no bite or bass.

A cheesecake made with blue-veined fromage is such a devilish intriguing idea that I’d be astonished if it hasn’t been done before. Although Trivet’s take had a surprisingly tame biscuit base, the tangy astringency and fluffy lightness of the blue cheese filling more than made up for it. It was so potently flavoursome, it would’ve been overpowering without the smooth and refreshing passion fruit ice cream. The white chocolate ring was a superfluous addition, but it hardly detracted from this dessert’s charms.

Top tip to the waiting staff: if a table is having a heartfelt discussion about a personal tragedy, don’t interrupt to explain the menu. Just don’t.

Just one barnstorming dessert out of four is a success rate worthy of a Theresa May vote, but at least the petit fours were consistently good. Soft and delicately spongy canela packed a squidgy caramel centre tinged with a fruity accent I couldn’t quite place. Still, these petit fours made up for the frequently disappointing desserts. 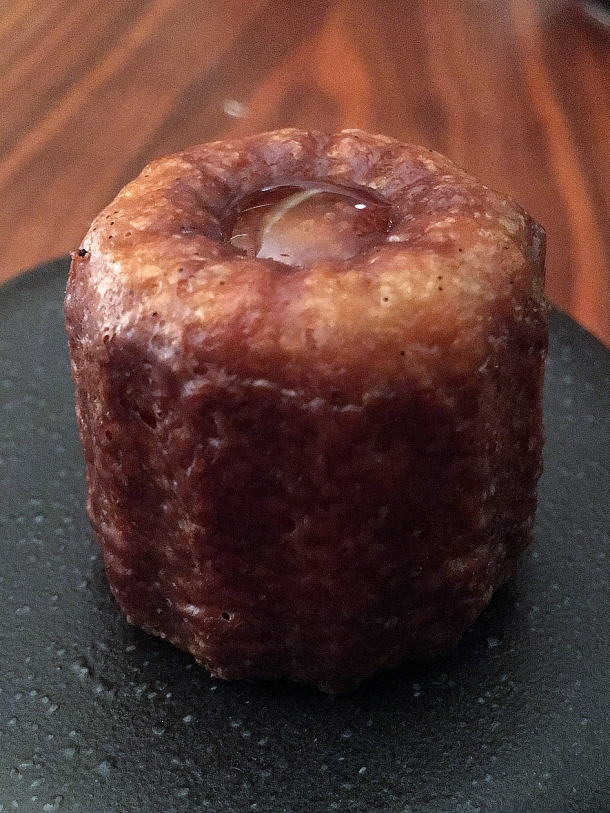 Fine dining, as a genre, retains its relevance in our post-tablecloth era by innovating. Brave new worlds are created in kitchens supported by diners willing to cough up the sums necessary to push the culinary state of the art forwards. Whether other diners with proletarian chips on their shoulders want to admit it or not, those innovations can have long-lasting effects on how and what we consume when eating out. Fine dining restaurants that don’t push themselves forwards are thus actively moving backwards, doing little more than feeding those who can more than amply feed themselves elsewhere.

That’s a lot to place on Trivet’s shoulders, which some may not even classify as fine dining, and which probably just wants to plate some food and make a half-decent living while doing so. While the kitchen displays commendable skill in executing meat and seafood to a high standard, the same can’t be said for its desserts while the lack of attention paid to vegetables is also noticeable. Trivet does occasionally display a twirl or two of inventive flair, but for now it mostly seems content to dish up a satisfying feed rather than open up exciting new worlds. There’s nothing wrong with that, but that does mean it sometimes struggles to justify its somewhat high pricing.

Trivet is a decent enough restaurant. But I doubt that’ll be truly enough to make us really appreciate it, to give it real staying power, in the years to come.

Average cost for one person including soft drinks: £70 approx.