There’s no shortage of places in London to graze on small tapas-sized plates while guzzling wine, places where the list of liver-annihilating beverages is several times longer than the menu, especially around London Bridge and Borough Market. To the untrained eye, there’s little to set Flor apart from its stool-and-counter competition apart from his handsome wood panelled interior and narrow spiral staircase. Peek at its website however and you’ll discover that this compact little restaurant is from the same people behind Lyle’s, one of the best restaurants in London.

That track record-derived goodwill is more than enough to get me through the door, but in the end Flor has to stand on its own two feet. This is all the more tricky to pull off with tapas-sized small plates, where there is very little room to hide if the ingredients and cooking are in any way off-kilter. As a non-drinker, I can’t offer any assistance in navigating Flor’s wine list. But I certainly have some thoughts on Flor’s food menu, after dining there multiple times.

It’s easy to become blase about raw seafood. After all, once you’ve found a trustworthy supplier, it appears there’s little left for the kitchen to do. Flor’s kitchen almost appears to have been anticipating this objection with its take on raw red prawns. The raw crustacean bodies were plump, sticky and meaty with a sweetness underlaid by an undercurrent of umami. The heads, though, were grilled which imparted a quivering texture and delicate milky quality to the nub of meat nestled inside each one. This wasn’t without trade-offs though, as the head gunk wasn’t as slurpably musky as it so often is in its raw state. Even so, this was a dish of unquantifiable joy.

Off with their heads!

Bittersweet leaves were a pleasure in of themselves, but also acted as a carrier for musky cheese, a sprightly sauce and the distinctive nutty crunch of hazelnuts. This was not a salad to be underestimated.

Leaf it out, he ain’t werf it!

Flor’s flatbreads will inevitably draw comparisons to the similar mini-pizzas sometimes available at Shoreditch’s Two Lights, itself a spin-off from another London gastronomic institution. The potato flatbread was essentially a packet of cheese and onion crisps in glad rags, the musky gooeyness of the cheese melding with the sharpness of the onions. The bread wasn’t especially tearable, soft or elastic though, a textural problem which was also apparent in the otherwise pleasing clam flatbread. Much like Two Lights’ version, the brineyness of the chewy clams seemed tailor made for the gooey cheese. 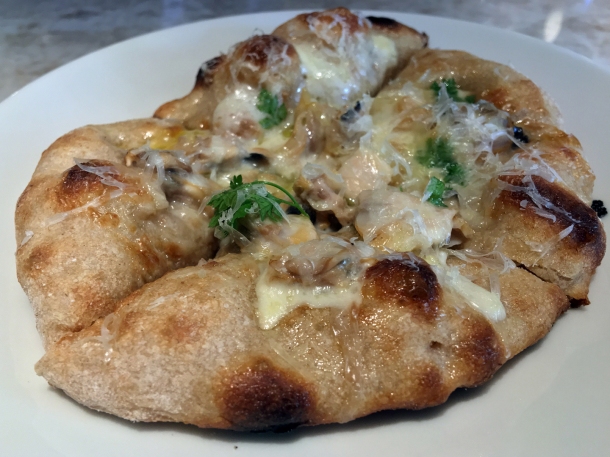 I should really clam up, but sometimes I just can’t help myself.

The crisp and springy crust of the the lamb ribs gave way to reveal layers of neatly rendered fat, as well as tender meat riven with the occasional seam of connective tissue. The relatively rich heaviness of the lamb flesh was offset by zingy garnishes and a sprightly sauce. While pleasurable enough in its own right, the differences between this dish and its street food equivalent at the nearby Mercato Metropolitano’s Turkish Garden were remarkably modest.

While finishing this review, I became aware that a rather famous and once rather funny restaurant reviewer had reviewed Flor.

Brown butter cakes doesn’t sound like a dessert to get excited about, but this is already a patisserie legend in its own lifetime. Chewy and dense with a caramelised toffee-like richness almost certainly derived from weaponised brown sugar as well as butter, these little beauties punched well above their weight.

Unfortunately, he spends a lot of time these days writing about how he definitely isn’t a racist despite having used some racist tropes in some of his previous reviews.

Despite the ineffectual mouthfeel of the flatbreads the first time around, Flor’s kitchen doesn’t stand still. A flatbread topped with mussels was not only even more briney, fleshy and gooey than its clam-topped predecessor, the bread was more pliable and soft too. It still wasn’t up to the standard set by Two Lights, but any improvement is still a welcome sign.

You probably know who I’m talking about, especially if you’re a keen restaurant watcher. 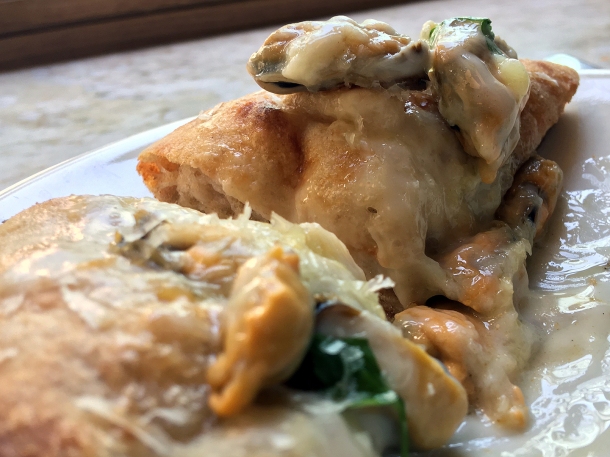 Don’t make me spell it out. No one has times for that.

Although not anywhere as layered and texturally pleasing as Wild Honey‘s burrata, Flor’s effort was nonetheless silky in its creaminess. It also came surrounded by a panzanella salad of crunchy bread pieces and sweet, umami tomatoes. Everything was enlivened further, and then tied together, by what tasted like an olive oil tinged with hints of basil. Imperfect, yet delicious all the same.

As with the archetypal embarrassingly ‘eccentric’ uncle whom we all have, and try to avoid at family gatherings, it’s just best to ignore him whenever possible.

Black pudding came with mildly nutty beans and delicately sweet, tender slices of peach. This made the humdrum black pudding itself all the more puzzling. While moderately earthy and musky, these qualities were surprisingly restrained and sedate – especially for something like black pudding which is often a brassy, tits-out foodstuff if there ever was one. Disappointing.

I suppose I should read his review at some point (it’s apparently an eyebrow raiser), but it takes effort to be that bored.

Eating pigeon in London always feels like an act of delicious revenge given the innumerable flocks of flying vermin blighting the capital. The meat here was a story of two halves. The breast meat was akin to a cross between venison and duck – dense, firm, moist and remarkably lean. It was occasionally tough close to the bone, a problem that thankfully didn’t afflict the leg meat. Clasping each leg by the ankle ensured every scrap of tender, succulent and surprisingly smoky meat was shorn off the bone. Toast topped with delicately creamy yet meaty pate wasn’t really necessary, but neither did it spoil the proceedings. 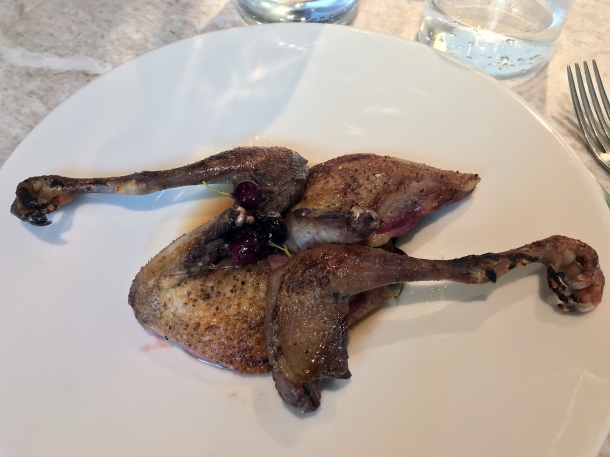 The unexpected quasi-symmetry of a flying pest on a plate.

Yes yes, I know this is almost certainly squab rather than the common street pigeon. Indulge my bad jokes.

While a tad small, the cherry blossom cake was certainly big on mouthfeel. Sitting somewhere in between a brownie and batter, the cake was exceptionally moist, airy and yet somehow gently chewy too. Its floral sweetness received a boost from the sliced sour cherries, completing a dessert of uncommon splendour. 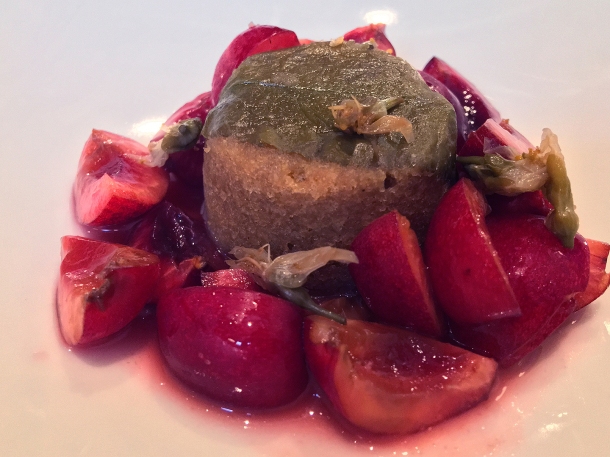 May a thousand cherries blossom.

Three is the magic number?

Flor’s selection of charcuterie is usually limited to just two choices, but both were well-chosen and worth having in my experience. Wild boar ventricina was nuanced and complex with pepperiness and a gentle heat contrasting with a bittersweet aniseed-like flavour. Culaccia was a bolder, more full frontal affair with its musky, salty fattiness.

I keep mistyping ‘ventricina’ as ‘ventricle’. 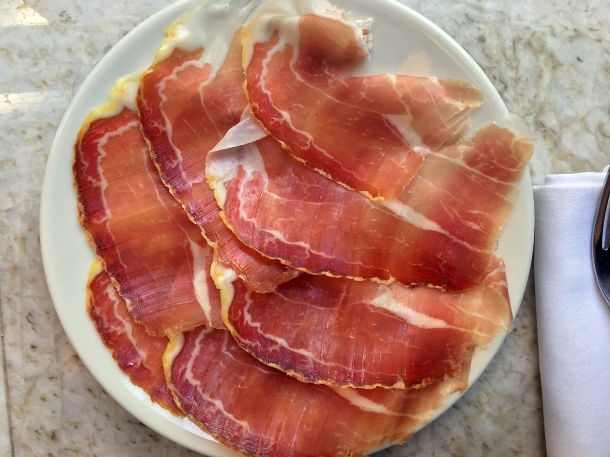 I should try to understand why that keeps happening, but my heart isn’t really in it.

Anchovies sandwiched between toast and lardo wasn’t as decadently umami as I was expecting. Although subdued, it still had enough character to be enjoyable with the slick unctuousness of the lardo cupping the briney saltiness of the anchovies.

Topped with marjoram. Gotta chase those likes on Instagram.

‘Lardo’ is my super-ego’s nickname for my id.

Almost all of us has had to tolerate a colleague’s microwaveable fish pie blanketing a workplace kitchen with its manky stench. The only thing that can possibly excise the olfactory memory of fish armpits from one’s mind is Flor’s hake brandade. Odor-free, fluffy, creamy and with a hint of zest, this dish was a warming, cosseting hug with its fish element highly reminiscent of salt cod. Sweet, fleshy peppers added some much needed variation to the surprisingly generous portion size which could have otherwise outstayed its welcome. 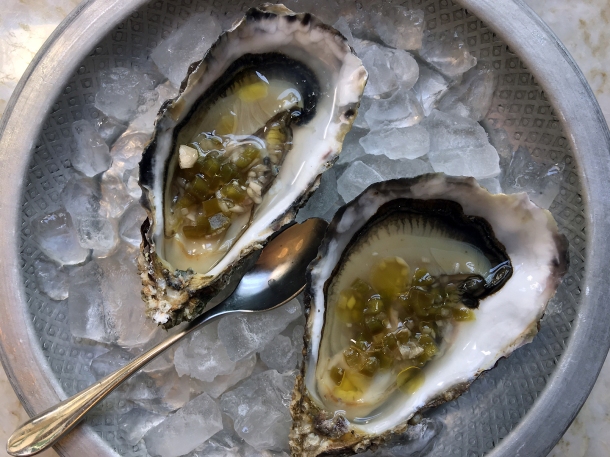 Skewered chunks of rabbit kidney, while reasonably meaty, weren’t as crisp, bouncy and offally as I was expecting. The accompaniments were far more interesting – the hattrick of crisp breadcrumbs, sweet peas and a tart brine-like sauce were utterly lipsmacking. 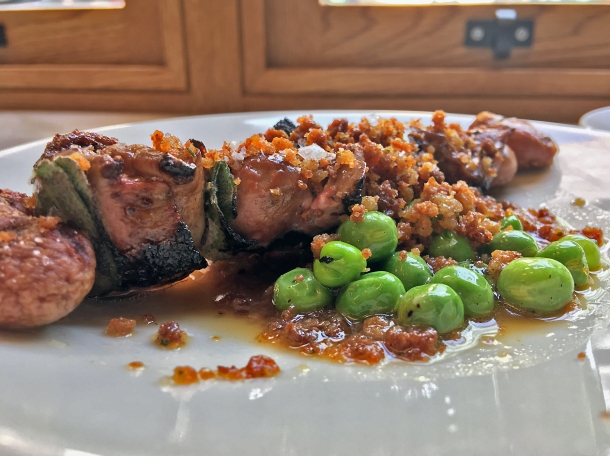 Japan’s yakitori restaurants can sleep easy for another night.

Flor’s take on Neapolitan ice cream was allegedly tayberry, peach and verbena-flavoured, but if anything it tasted like rhuarb, custard and raspberry to me. Although somewhat refreshing on a hot summer’s day, the crunchy ice crystals were nonetheless jarring and deeply unimpressive.

You’re better off taking your chances with the nearby branch of Gelateria 3Bis.

Snagging a table or perch at Flor has already become quite tricky, perhaps due to the hype generated by this restaurant’s links to Lyle’s. In reality though, Flor was a much more uneven experience than its forebear with dishes see-sawing from unbalanced to stupendous – often within the same meal. Throw in the equally uneven service, which can vary from welcoming and efficient to mute and slow, and I find it increasingly difficult to rustle up much enthusiasm for Flor. Given Flor’s pedigree, it’d be unwise to count them out entirely – it’s possible that the kitchen’s craft could improve dramatically in the weeks and months to come. But it’s a big, crowded market out there for small plates. With so much choice available, there’s little reason to stand around waiting for Flor with bated breath.

Average cost for one person including soft drinks: £50-£70 approx.