Defies both easy categorisation and expectations

If there’s been one defining cultural aesthetic in the West over the past 20 years or so, then it has to be minimalism. Paring back everything to their essentials is, depending on your point of view, either the ideal way to show off something’s true nature or a stark, monotonous and characterless white hole of ultimate blandness.

Lyle’s is hardly the first restaurant to embrace minimalism, but it’s still nonetheless striking how much it pervades nearly everything that this Shoreditch restaurant presents to the customer. Whitewashed walls, blank-faced tiles and bare concrete floors are just the start. Not a word is wasted on the menu – if you want florid dish descriptions and category/section headings, then you’re out of luck.

Unfortunately, this stripped-back approach also extends to the service. While almost always very efficient, it’s also usually lacking in charm and warmth. In a way it’s almost admirable that a workplace has managed to instil such a widespread and consistent sense of perfunctory brusqueness into almost its entire front of house staff.

This sandblasted sense of hospitality would annoy me a lot more if it wasn’t for the remarkable cooking of Lyle’s kitchen.

Curiously, Lyle’s only has a set tasting menu in the evenings (barring any allergies or other dietary requirements). This’ll put off anyone who automatically equates choice with quality, but it really is their loss if they don’t want to put their faith into the instincts of Lyle’s chef.

Light and wispy, yet distinctly rich and creamy whipped goat’s brie came with endive/raddichio leaves for scooping. The witless may chafe at the use of leaves in place of bread or plain utensils, but the pairing of neutral crunchiness with rich creaminess was an inspired one as far as I’m concerned.

The red leaves of fate.

I would never have known that the second amuse bouche was a helping of caramelised Jerusalem artichokes if I hadn’t been told. Gently woody and smoky, the bulb slices were almost fig-like in their sweet stickiness. 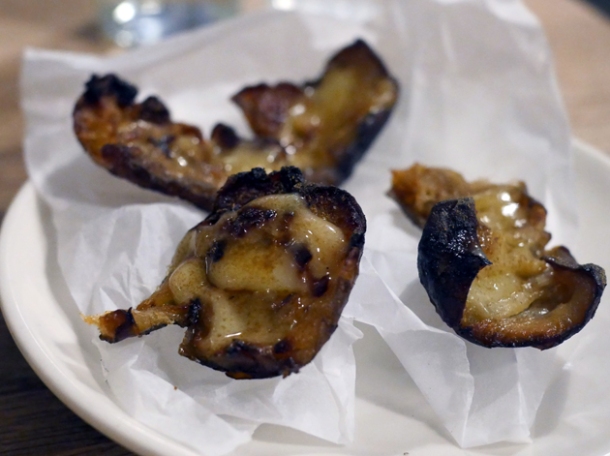 Kangaroo Face, my loquacious dining companion for the evening, was by no means a salad-dodger, but had nonetheless held vegetable-only dishes in low esteem. That’s no longer the case and it’s all thanks to Lyle’s. Dense and hearty, yet also soft and lightly sweet pumpkin somehow flowed almost seamlessly into the gently bitter sprouting kale and crunchy, distinctly nutty hazelnuts. Few dishes, vegetable-only or otherwise, are as well-balanced and satisfying as this.

Sprouting kale, or ‘kalelets’ if you’re a supermarket marketing wonk.

Our monkfish wasn’t as lobster-like in mouthfeel as I would’ve expected, bearing more of a textural resemblance to white fish such as cod and hake. It tasted profoundly milky though, which contrasted neatly with the richness of the monkfish liver. The latter unsurprisingly tasted like a cross between porcine offal and salty fish roe, all in a package with a creamy foie-ish texture and consistency.

Although the blood orange segments were only modestly sharp and sweet, this was still enough to not only make their presence felt on the tongue but to cut through the richness of the liver too. Few fish dishes are as nuanced and complex as this one, while also exuding such boldness and character. 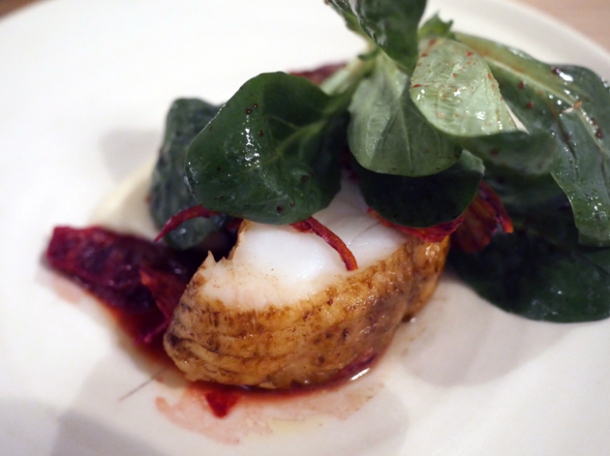 The kid, or baby goat for the non-sentimental amongst you, unsurprisingly tasted very lamb-like. The best part had to be the chewy, salty skin which was neatly enhanced by the umami of the anchovy puree. The accompanying fennel wasn’t as distinctly bitter as I expected though.

Although eminently pleasing, it was overshadowed by an unexpected surprise on the side of shawarma-like flaked shoulder and neck goat meat. Its richness was bolstered by a sauce-dripping combo that balanced herby bitterness against its inherent unctuousness. Drowning in a bath tub of this stuff would be my preferred way of shuffling off this mortal coil.

‘Goat’ is an anagram of ‘toga’. Coincidence? Yeah, probably. 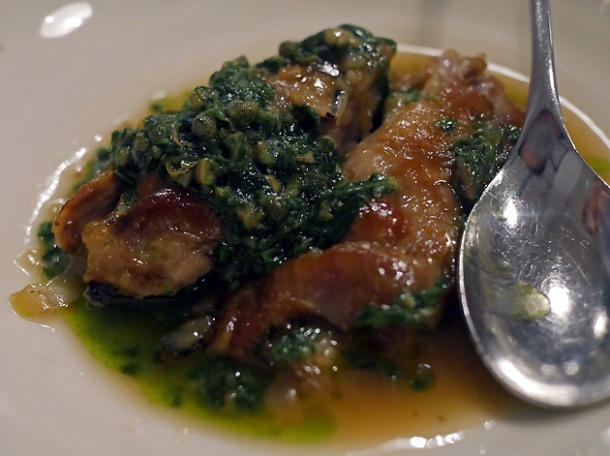 Chocolate desserts are usually dull and lifeless crowd-pleasing affairs. The unmemorable chocolate mousse here was partially saved from that damning characterisation by its accompaniments. Pleasingly oaty wafers, a crunchy dusting of nuts and a briskly cold cream with a yoghurty tang and a startlingly clear and clean aftertaste would’ve been even better with something more interesting than a by-the-numbers chocolate mouse.

Kangaroo Face didn’t have the appetite to join me for cheese, which made the portion sizes of the cheese duo all the more remarkably generous. Blue-veined Colston Bassett mixed a gently astringent salty funk with a mild creaminess. The bigod balanced a goat-like funk against a salty rich creaminess to pleasing effect. If you can finish off the shipping container’s worth of crispbreads and caramelised onion chutney, then you’re a better person than I am.

Given the miserly portions usually seen on restaurant cheese boards, this was nothing short of munificent.

Far better than the chocolate mousse as a dessert was the petit fours of candied rhubarb pastilles and chewy, caramelised bready mini tarts. 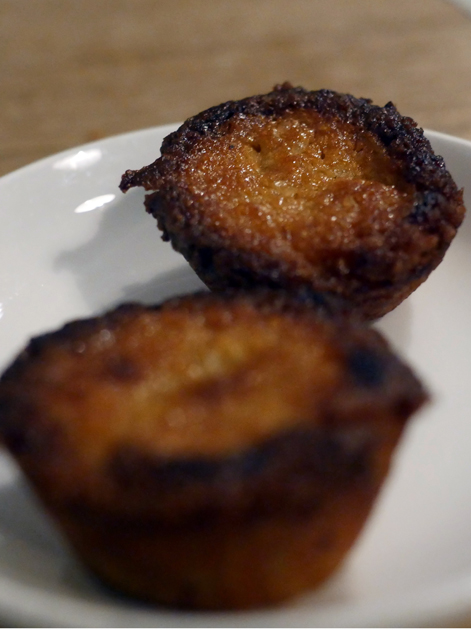 If the waiters are going to insist on dish descriptions, then don’t mumble – especially in a somewhat loud dining room with lots of bare surfaces.

Lyle’s has an a la carte menu at lunch time, if you absolutely must have the illusion of choice and control. You would do yourself a disservice in skipping Lyle’s vegetable dishes. The gentle bitterness of supple, fibrous leeks was greatly enhanced by a sauce-egg-coolea cheese agglomeration that was much greater than the sum of its parts. Creamy, sweet, bitter and umami – this deceptively sumptuous dish had it all.

The lacquered surface and delicately smooth, pale white flesh of the eel didn’t just coast by on its good looks. It packed a powerful, addictive smokiness that was complimented by the generously salted leaves of wrinkly kale. Both were bound together further by the double umami of a seaweed sauce and extant wrinkly bits of seaweed.

Definitely not the bush leagues.

Flank steak was sliced thinly against the grain and cooked rare. The chewy, browned bark gave way to reveal a quivering purple interior tinged with a beefy tang. Purple sprouting broccoli was cooked just so and made even better by an anchovy puree. Although the umami of the latter was surprisingly modest, this did at least mean there was no chance of it overwhelming the gentle beefiness of the steak.

A special mention has to go to the bread and butter at Lyle’s. Well, just the butter really. Wispy with a rich lactic tang, it’s both light and decadently rich at the same time.

This may have ruined all other butters for me.

Although I was tempted by Lyle’s richer and heavier sounding desserts, opting for the lemon sherbet and meringue was the wiser choice and yet still a very satisfying one too. Crunchy, light meringue layered on top of a refreshingly brisk sherbet. The latter was tart and zesty in its own right, but made even more so by the addition of boldly zingy and citrusy preserved peel. An eminently refreshing yet characterful ending after the richness of the savoury trio preceding it.

Lyle’s menu changes at least once a week.

The point of minimalism in restaurants is to dial back almost everything so that the focus rests firmly on the food. In this respect, Lyle’s succeeds with aplomb and verve. The food was, almost without exception, a masterclass in deft precision, inventiveness and classy yet gut-busting satisfaction. Plus, minimalism has the effect of keeping costs and thus the bill as low as possible since you’re not paying for expenses such as receptionists/cloak room attendants, excess crockery like bread plates and the costs of laundering drapes and table cloths.

The one downside is Lyle’s somewhat stiff, rough-edged and brusque service. I would emphasise that it never crossed over into unfriendliness or disrespect and it certainly wasn’t anywhere bad enough to detract from the food. But even with the cost benefits of minimalism, you’re still looking at an average spend of around £70 per head excluding booze. While a steal for this level of cooking, that’s still a lot for many people and you should get a warmer reception to go along with it.

Even so, don’t let that stop you from making a reservation right now. Eating in Shoreditch has long been about more than just burgers and daft concept bars – The Clove Club and Oklava are evidence of that. Lyle’s cements that reputation – it leads, while others follow.

Average cost for one person including coffee: £70 approx.