Every dish on the menu tried and tasted

Bao in Borough isn’t just another Taiwanese restaurant serving up gua bao. It’s the latest in a line of small but highly successful bao restaurants that have been lauded and recommended by many, including this site. Living up to one’s own expectations is tough enough. Living up to the heightened expectations of breathless restaurant watchers must be extra pressure that the proprietors (even JKS-backed proprietors) almost certainly don’t need. And that’s before one remembers that Bao is expanding its mini-chain at a time when other, admittedly far larger chains have dramatically imploded under the public gaze.

Bao Borough, while clearly following the template set by its predecessors with a core menu of staple gua bao, also has a few dishes you won’t find at its Soho and Fitzrovia cousins. There are grilled dishes which seem to take inspiration from Taiwanese night market versions of Japanese yakitori and Chinese meatballs. A new selection of iced teas and fruit juices seemingly pay homage to Taiwan’s enviable selection of non-alcoholic drinks. And, last but not least, there’s a downstairs karaoke room! 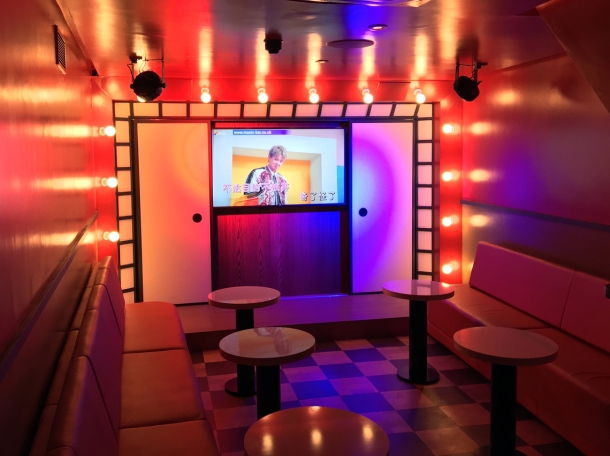 I wanna dance with somebody.

Bao Borough is clearly not a carbon copy of its predecessors, more a Pokemon-style evolution that – for the most part – is a step forwards and not backwards.

The steamed buns used in the all gua bao I had were admirably soft, pillowy creations. The Classic Bao was, unsurprisingly, one of the best with the fattiness and umami of the meaty pork joined by mustardy, peppery greens and an unmistakable dusting of crushed peanuts. There was a slight variation on a subsequent visit where the peppery greens had been replaced by a earthy, moreish cabbage. But this was a good in a different way, not worse. A delectable hattrick, either way. 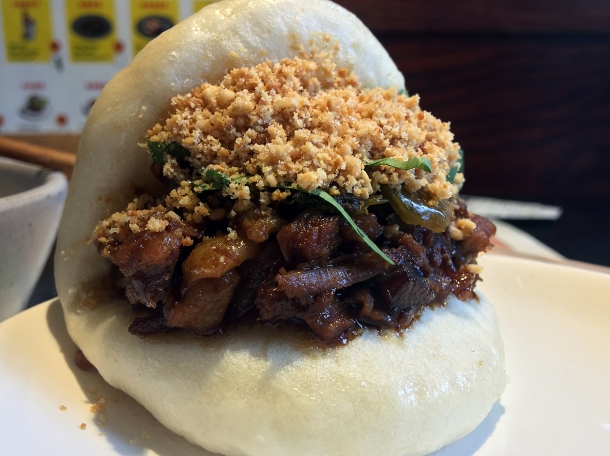 I want it that way. 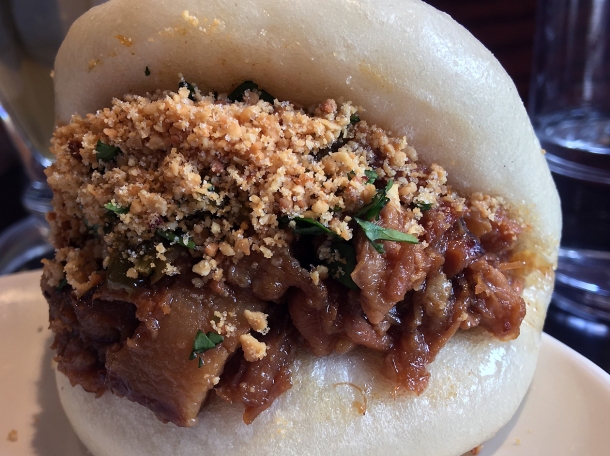 The short rib bao was even more sumptuous than the classic pork with the unctuous, sinewy beef dotted with hints of ginger and draped with an eggy, creamy sauce that I would quite happily drown in. 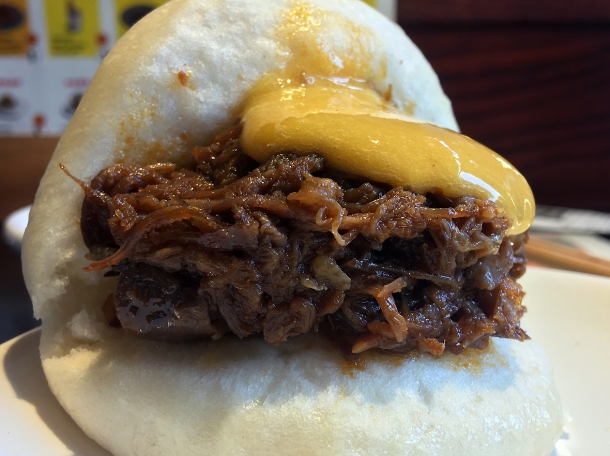 The fried chicken used in the chicken nugget bao was perfectly crunchy, crisp and oil-free, with dark, moist and moreish chicken lurking underneath that perfectly formed panko batter. The veg had little to say for itself, but I didn’t mind given the richly sweet sauce. The only real flaw here was the fluffy bao struggling to contain the bulbously slippery fried chicken. 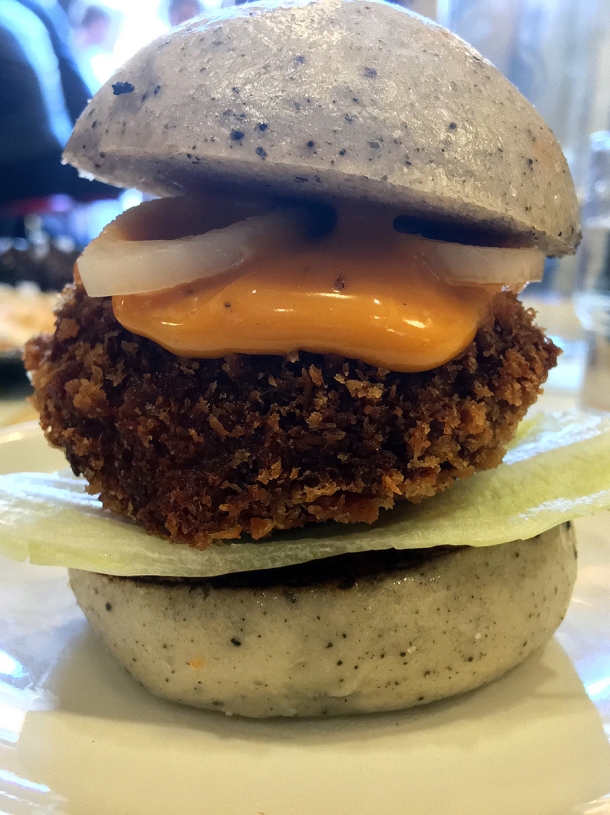 I want to break free.

The bun used in the prawn bao was a little different from the others. This deep-fried miniature submarine roll almost resembled a cross between a Krispy Kreme doughnut and a brioche roll, with the perfectly crisp exterior giving way to reveal an exceptionally airy interior. The filling was almost as special – chunks of prawns dotted with chives. Although the prawn filling could’ve been a touch punchier to stand out against the textural wonder of the bun, this was still a pleasing bao. It was as if someone had crossed an American-style lobster roll with a dim sum dumpling – a melange I’m definitely in favour of. 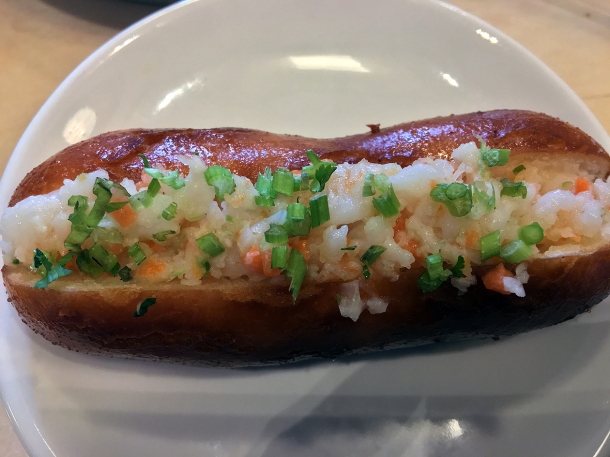 Livin’ on a prayer.

The least successful of the bao is also one of the newest. A ‘curry cheese’ bao is nothing if not intriguing, but the chip shop-ish sweet curry sauce didn’t meld well with the sweet chilli sauce, while the unexpectedly wispy block of batter-encrusted cheese was gone before it had a chance to make an impact. A damp squib. 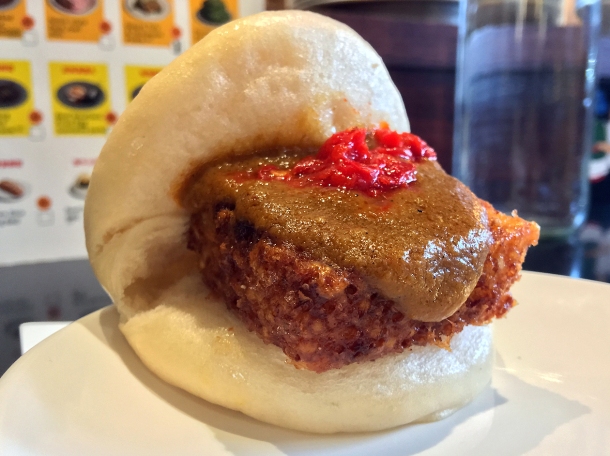 Thin, delicately sweet and fatty slices of pork jowl were jointed by crisp, tangy bamboo shoots in a numbing, sour, lightly spicy and citrusy sauce. It was a delightful combination, even though the sauce’s deeply rich and nuanced qualities sometimes overwhelmed the fatty joys of the jowl. 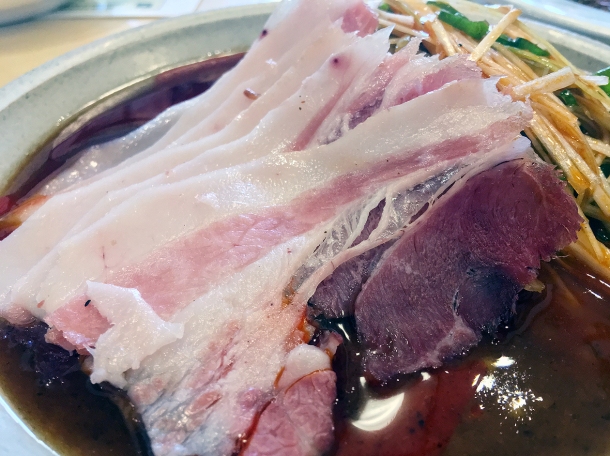 A beef and pork meatball served with a fried egg and chopped onions sounds like a late night buffet scavenged from a near-empty fridge. This dish should not be underestimated though – the sticky, fatty, intensely rich umami of the skewered meatball was amplified even further by the runny egg. This dish wasn’t quite as moreish on a subsequent visit, but it still packed a potent amount of meaty unctousness. 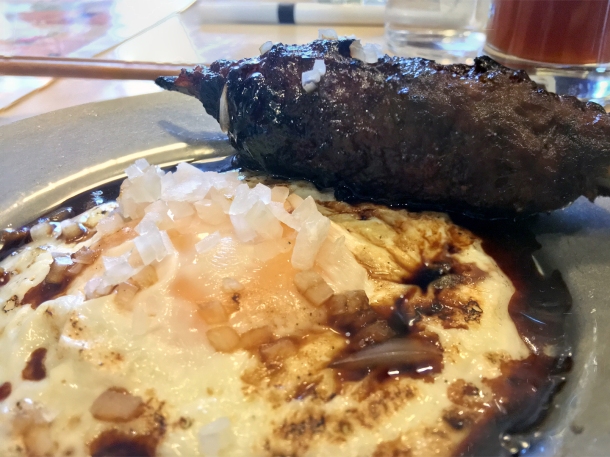 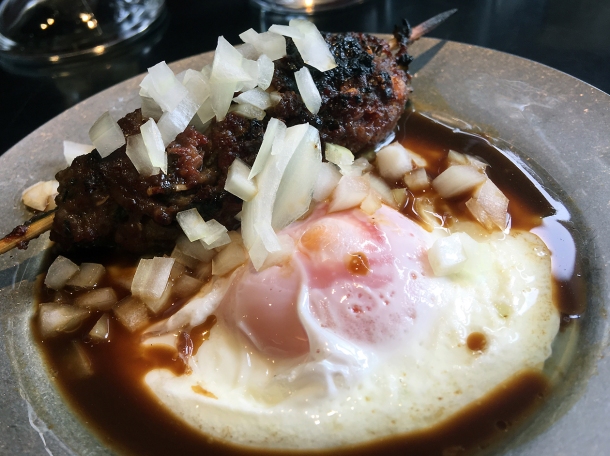 Beef butter scallop is scallop singular and not plural. Although this scantiness sticks in the jaw somewhat, the genteel sophistication of the cooking on display here could not be faulted. The drawn and quartered scallop came covered in a XO-like sauce, but mellower and with a slick, buttery mouthfeel. It fitted the firm texture and smokiness of the scallop like a clamshell. 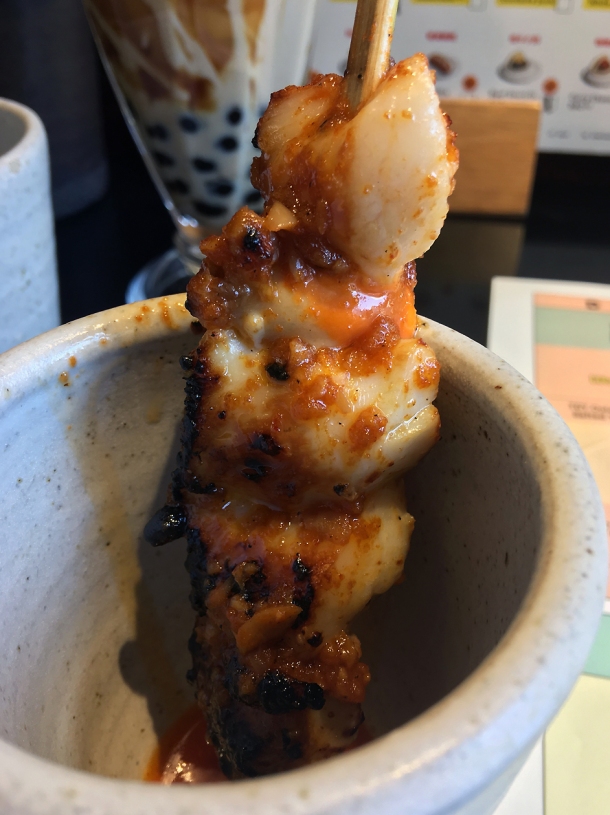 Beef butter scallop – not the word association I’d have gone for, but I’m definitely not complaining.

Surprisingly, the fried chicken wasn’t a carbon copy of the chook in the chicken bao. While still faultlessly crispy, the batter was pock-marked with dimples and raised bubble-like ridges that added to its mouth-pleasing crunch. The chicken underneath wasn’t anywhere as delectable as the poultry in the chicken bao though. Not even the hints of ginger and drizzled tangy bean sauce could make up for this disappointment. 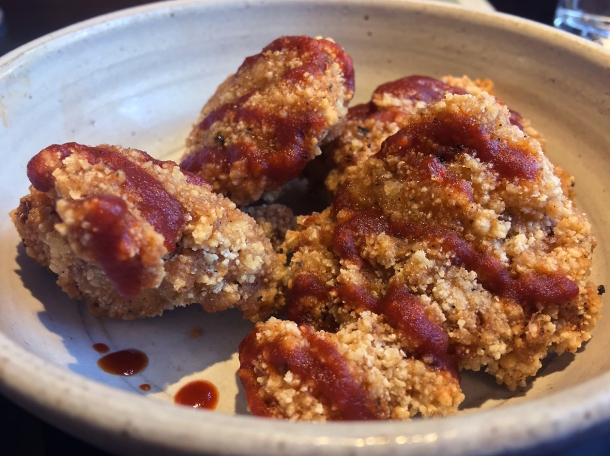 Don’t you want me?

Chicken wings make for a rather dull dish unless the skin and sauce are on point. That was thankfully the case here with the smoky, moist and supple skin accompanied by a surprisingly buttery sauce. Satisfying. 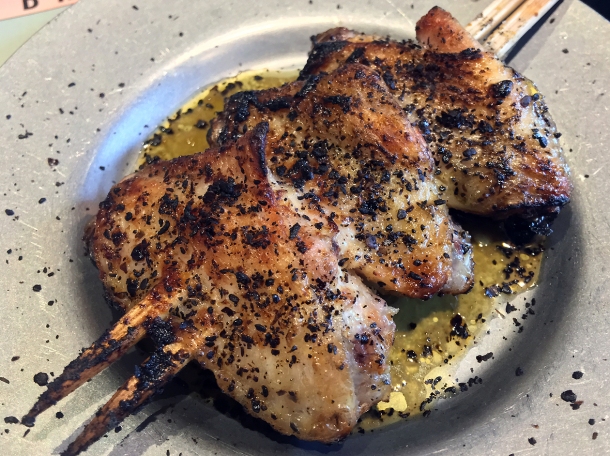 Total eclipse of the heart.

If I reviewed dishes on looks alone, then the beef, egg and rice would romp home with all the awards based on its radial symmetry alone. Thankfully, it was also utterly sensual in its deliciousness. The gently smoky, sweet and occasionally fatty strips of rare steak were made even better with rich egg yolk. The mixture of beef juices and yolk seeped into the already fatty small-grained rice when it was all jumbled together, making for a sumptuously fine second act. On a subsequent visit, the steak was woodier, earthier and muskier, if also a little leaner, which added some unexpectedly delightful variation to this dish. 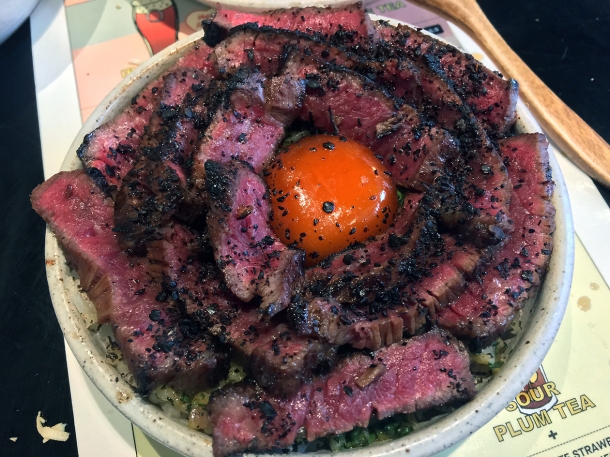 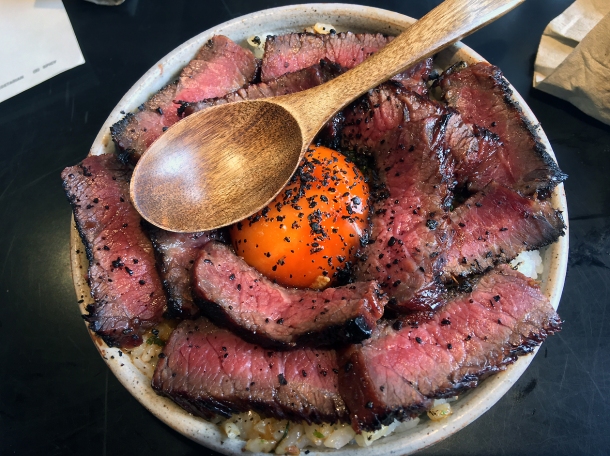 I’m not sure if the squidgy devilled-style eggs should be included here or in the vegetarian section below. Regardless, this was a shrug-inducing dish even with the lightly spicy sauce and what appeared to be grated cheese. 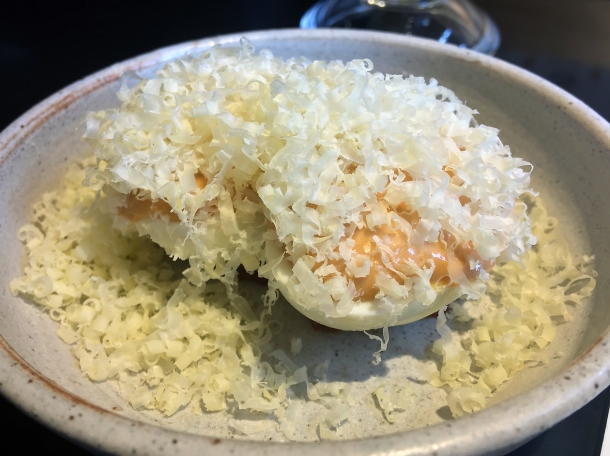 Cold-smoked aubergine was unsurprisingly similar to baba ghanoush in its fleshiness and delicate smokiness. It set itself apart from its Turkish counterpart with a light citrusy sourness and a hint of umami, with the whole lip-smacking lot accompanied by a perfectly crisp, airy bao. Pitch perfect. 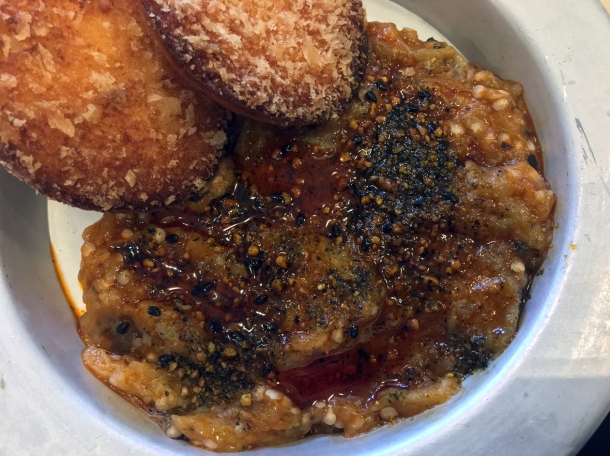 I believe in a thing called love.

Tendril-like maitake mushrooms were firm and crisp. The lightly sour and moreish dressing, somewhat similar to the flavours coursing through the cold-smoked aubergine, were an unusual and unexpected in a mushroom dish but no less enjoyable for it. 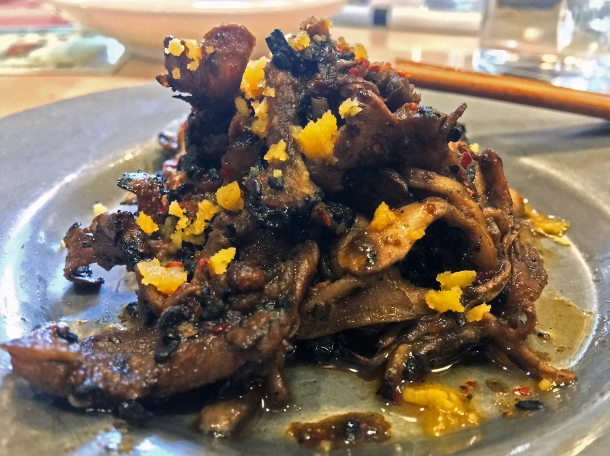 The House salad consisted of wrinkly, bittersweet leaves doused in what tasted like a Chinkiang-style vinegar and an aged soy sauce. Wherever the mellow, tart flavours of the dressing came from, they suited the leaves well. 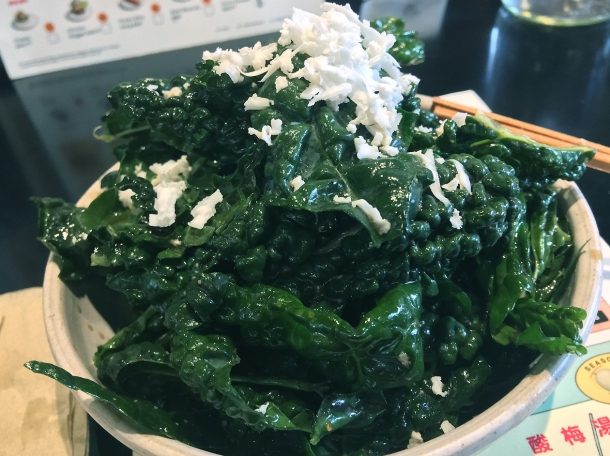 Tofu still has an undeservedly bad rap in the West and I don’t think Bao Borough’s take on it will change many minds. Malty and bready on the outside, soft and dotted with holes on the inside, it wasn’t bad. But it didn’t have much to say for itself, given that the tart and sour pickled cabbage hardly needed it. Half-way between sauerkraut and briney Cantonese pickles in terms of sourness, they were more than good enough to stand on their own. 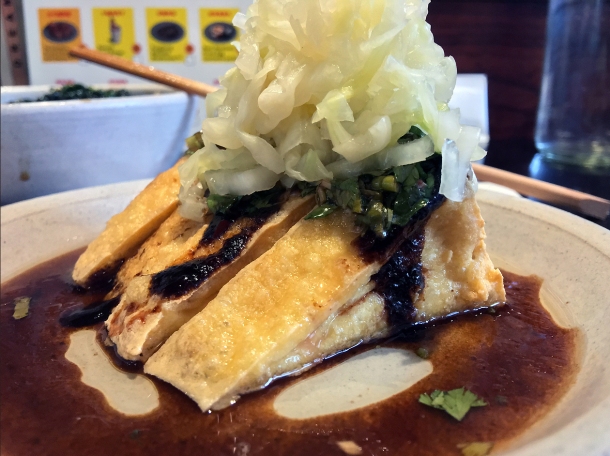 Surprisingly, a separate dish of pickled cabbage was a different beast altogether with much tamer levels of sourness and tartness. 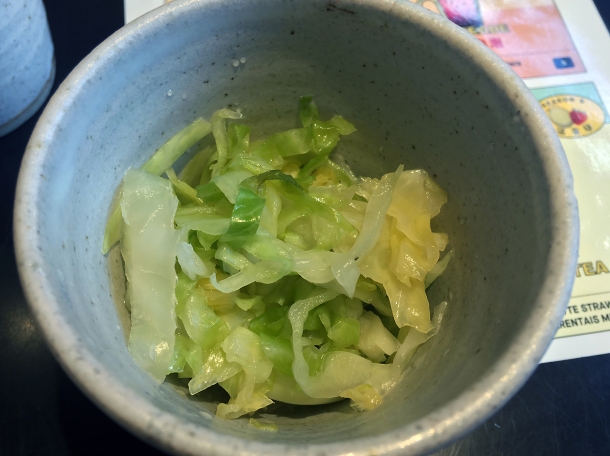 Bao Borough attempts to mirror Taiwan’s rich pantheon of booze-free beverages, but the results were often disappointingly underwhelming. The iron shake was a sweet and mellow iced tea, but not an especially refreshing one which was a problem given that so many of Bao Borough’s dishes coat the mouth in umami. Similarly, the cold brew iced tea was far too subtle and leaned heavily on the richly sweet chunks of cantaloupe for taste. The sour plum tea tasted little of the divisive fruit and resembled a watered down grapefruit juice instead. 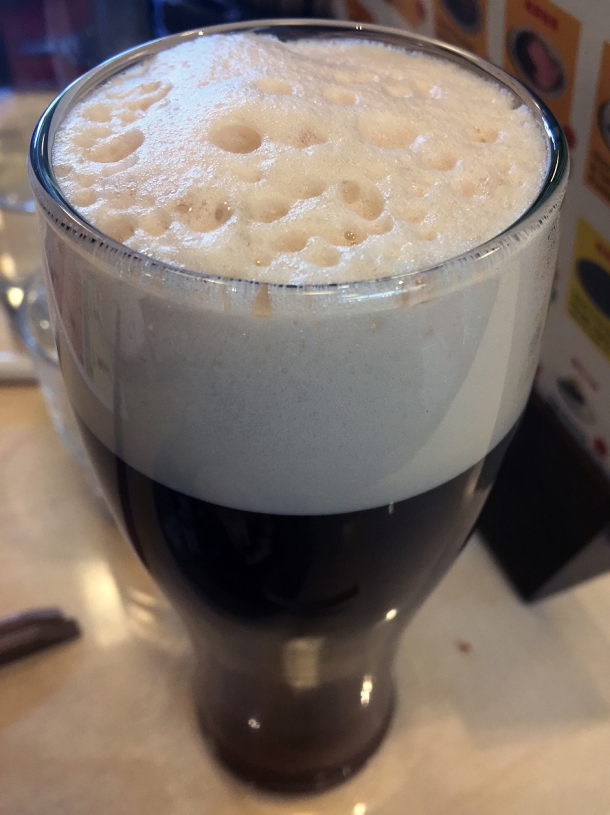 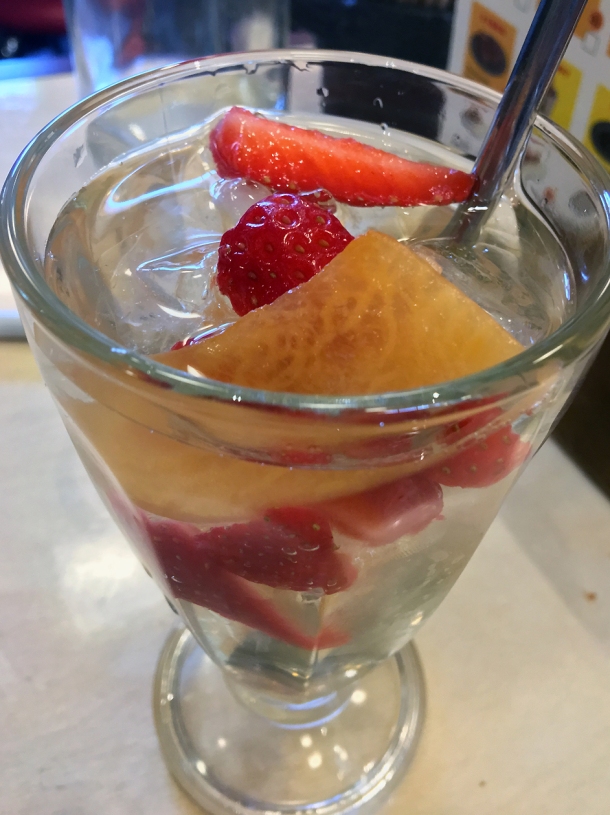 Knowing me, knowing you. 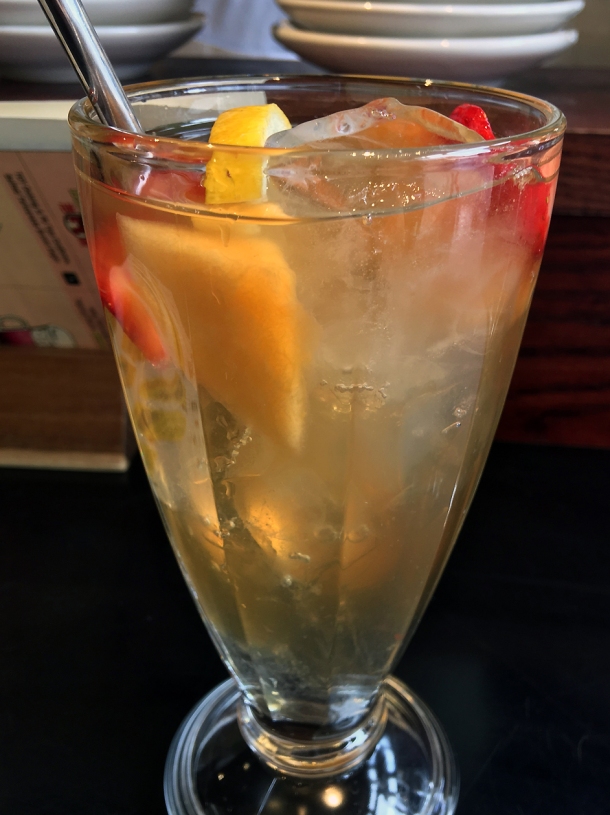 Bao’s bubble tea is curiously only available at lunch time, but it’s barely worth having. The drink is dominated by the taste of condensed milk and the malty raisin-like flavour of brown sugar. While hardly indigestible, it falls far short of the very best bubble teas in London. Far better was the Grapeade which resembled the Panda soft drinks of my misbegotten youth, but with a creamy foam leading into a taste highly reminiscent of hard boiled sweets. The best of Bao Borough’s liver-safe bevvies had to be the Yakult float. Topped with a mildly creamy foam, it was refreshing with a gentle fizz and a sweet tartness reminiscent of yuzu and pomelo. 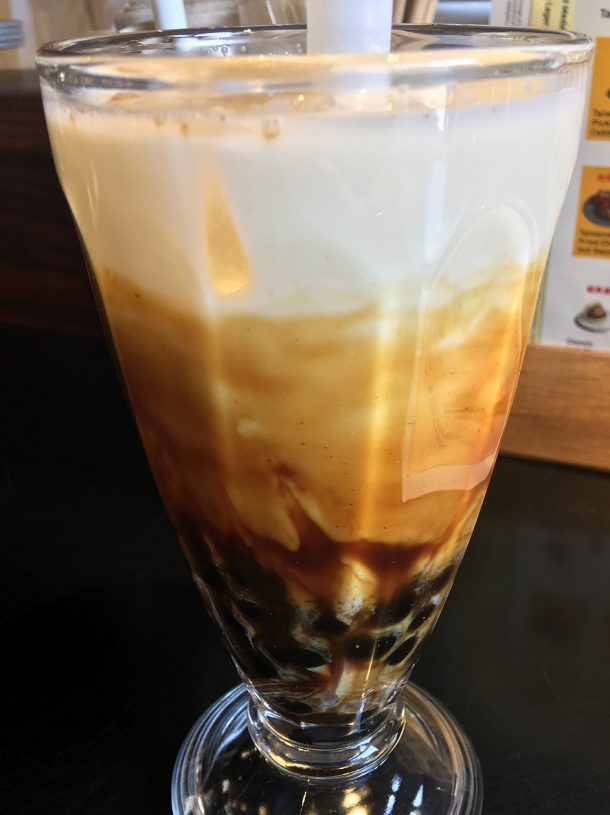 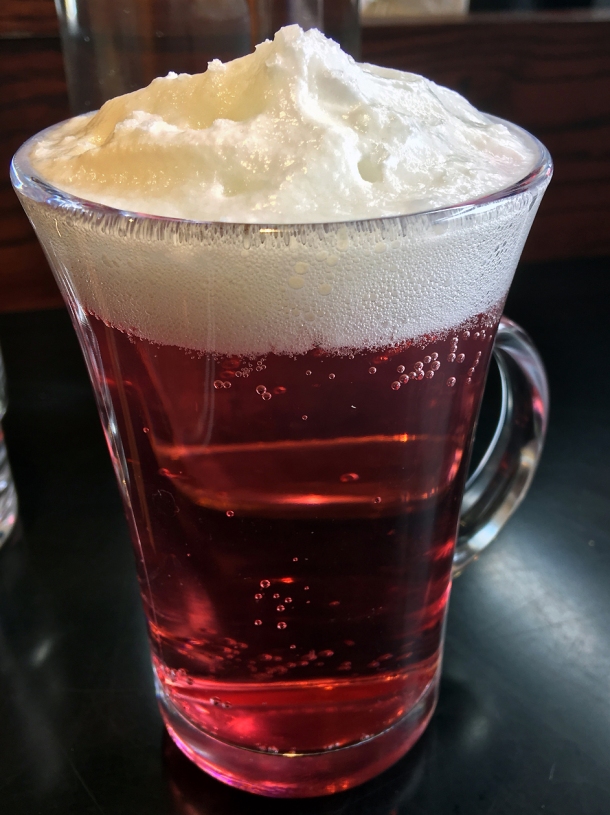 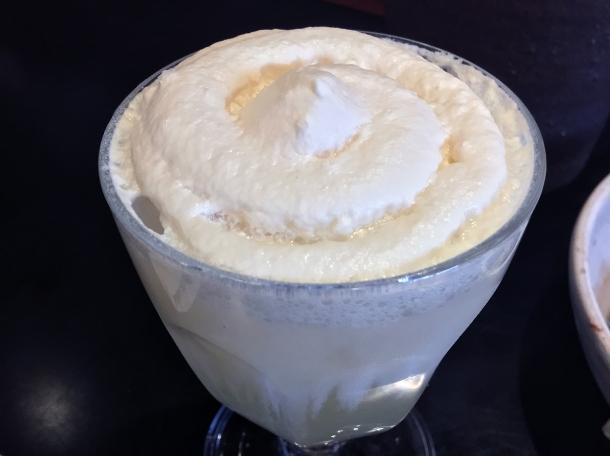 While the future is inherently unpredictable, it still seems unlikely that Bao will meet the same fate as the far bigger chains that have fallen on hard times. Its very modest rate of expansion, its lack of reliance on grabby venture capital investors and its differentiation in branch menus all help give it a far stabler base. Plus, its core audience of discerning restaurant botherers is very different from the coupon-clutchers and TripAdvisor-huffing smackheads that helped sink the bigger chains.

What is ultimately more central to Bao’s fate is whether it can stay relevant in a market for Chinese food that rarely stands still, with a seemingly unending stream of restaurant brands from the Far East and local independents attempting to stake their claim. The occasional wobble in Bao Borough’s execution are a cause for worry. But the superlative nature of dishes such as the steak, egg and rice, the meatball, the cold-smoked aubergine and the beef short rib bao also give me hope. It may ‘just’ be comfort food, but it’s so sumptuously well-honed that it deserves your attention nonetheless.

To use a possibly overwrought and obvious metaphor, chains are fatally undermined not just by their weakest links, such as ill-located branches. They’re weakened by structural deficiencies in how they’re forged and how they’re run, from the quality of the food they serve and the structure of their menus to an over-reliance on special offers. If the Borough branch is any indication, Bao is in safe hands and its latest outpost shows why so many Londoners have become enamoured with it. I hope Bao Borough stays with us for many years to come.

What to skip: eggs; pickled cabbage; most of the soft drinks

Reservations? only taken for groups of five or more.

Average cost for one person including soft drinks: £35 approx. (£45-50 approx. if you push the boat out)