But the claws on this seafood beast have been tied

Street food traders have been settling down and turning into proper restaurants at an astonishingly rapid rate. In the same span of a few short years, London’s railway arches have become hotly contested property – either because unsung local businesses are struggling to hold onto them or because hashtagging trend-molesters have set up shop inside them.

I would love to have been the fly on the wall in the meeting room where Bob’s Lobster negotiated for its space in one of London Bridge station’s newly renovated railway arches. Given the harsh economics of today’s restaurants trade and the criticism levelled at National Rail over its treatment of some arch tenants, it would be fascinating to know which side was punting the hardest for the other’s business.

Although their new digs aren’t nearly as handsome as the other premises once occupied by the sadly departed Paradise Garage, Bob’s Lobster London Bridge is still an attractive space. If only because they’ve managed to squeeze their old VW camper street food van into the dining room as a sort of bar/kitchen cubby hole. That might seem like a misuse of valuable dining space, but then Bob’s Lobster was usually only half-full on all but one of my visits.

It turns out there are some very good reasons for that.

Surprisingly for one of the winners of my lobster roll group test, the signature lobster roll at Bob’s Lobster is available only in miniature form. It’s also the only lobster dish on the dinner menu, which inadvertently makes their name seem like a wistful remembrance of times past rather than a present-day mission statement.

It was a fine lobster roll – a dense, chewy and buttery roll that came filled with chilled, firm and milky sweet crustacean meat. If only it were big enough to serve as a main dish. The logistics and financials of serving lobster dishes isn’t for the faint of heart – just ask Burger and Lobster which has had to raise the prices for its lobster dishes despite its immense economies of scale. Even so, this still seems like a missed opportunity for a restaurant that not only has ‘lobster’ in its name but also in its goddamn logo. 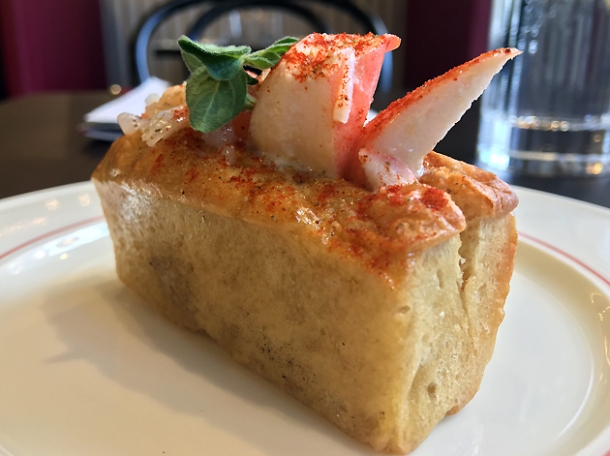 I shall call it… Mini Me.

Octopus ‘carpaccio’ was merely thin slices of tentacle (arrayed together into a circular form), effectively neutralising its mouthfeel – one of the reasons for eating the cephalopod in the first place. The dominant tastes were of dill and sweet stone fruit, a pleasing enough if ultimately unimaginative, unambitious and undemanding pairing. 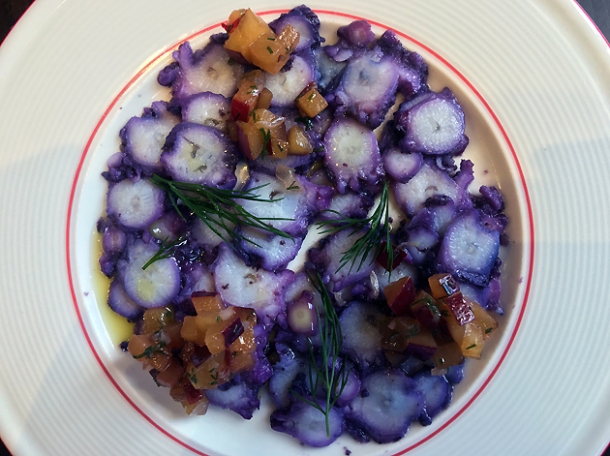 The ‘harissa’ coating the trout was a fruity sweet concoction, a far cry from the potently tingly harissas I tried in Tunisia. Even so, the trout itself was a joy. Cooked just-so, the delicately flaky yet earthy fillet made for fine eating. The harissa even managed to grow on me, its sweetness enhanced by crunchy pomegranate and flaked almonds. 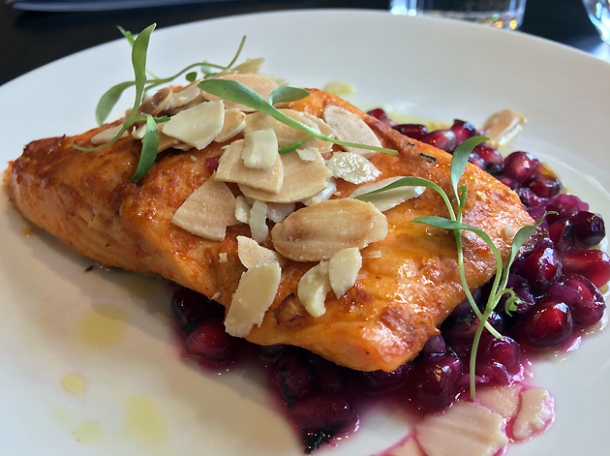 I’m trying to convince Templeton Peck to name his first-born ‘Harissa’. It works as a girl’s name, doncha think?

‘Pastrami cured’ trout was, as expected, peppery and thinly sliced. Its herby tartness was slight though and every curl of trout was excessively oily. While not bad, I’m not convinced this dish is that much better than a respectable smoked salmon or lox. 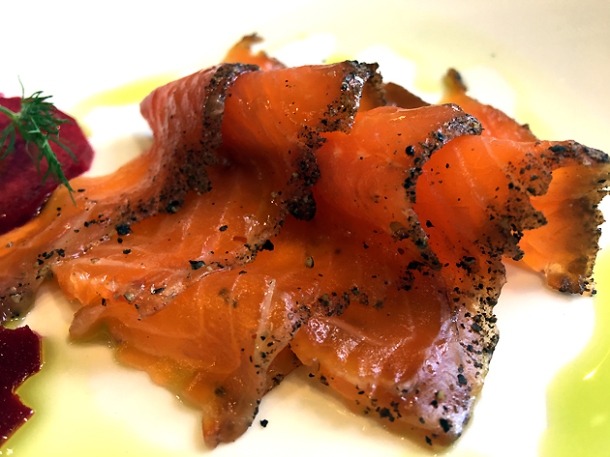 Despite its named, the baked vanilla custard was the perfect summer dessert. Served chilled, it was a dense, smooth and creamy concoction – akin to a panna cotta, but with welly. Tart and squidgy pieces of rhubarb were the perfect accompaniment. 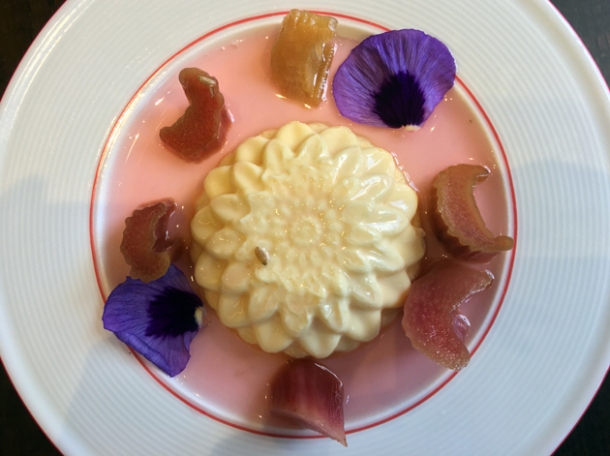 Battered, deep-fried whitebait and squid were just protein conveyors for an accomplished batter that successfully managed to skirt comparisons to tempura. Crisp, light, airy and free from excess oil, it was a world away from the stodgy, palate clubbers at Gilly’s. 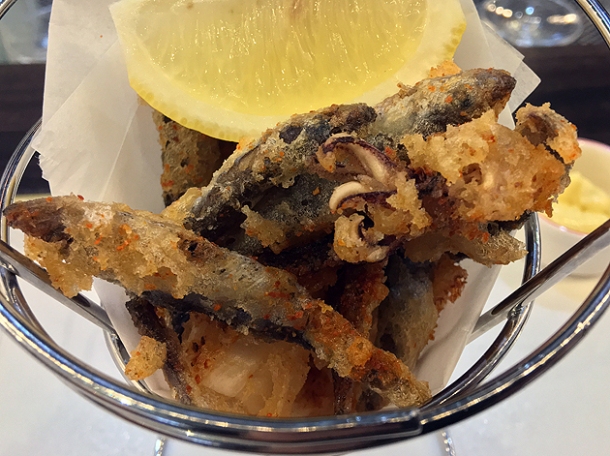 The less said about the pedestrian dipping sauces, the better though.

It takes cojones to serve ‘tacos’ just around the corner from London’s best Mexican restaurant. The tacos here used crunchy deep-fried ‘tortillas’ akin to levelled-up prawn crackers. They were not only a bit odd, but managed to obscure the gently chewy, mildly moreish tuna as well as the peculiar but nonetheless pleasant blancmange of sweet, creamy avocado and wasabi. There’s a good dish waiting to burst out of this unbalanced, over-conceptualised effort. 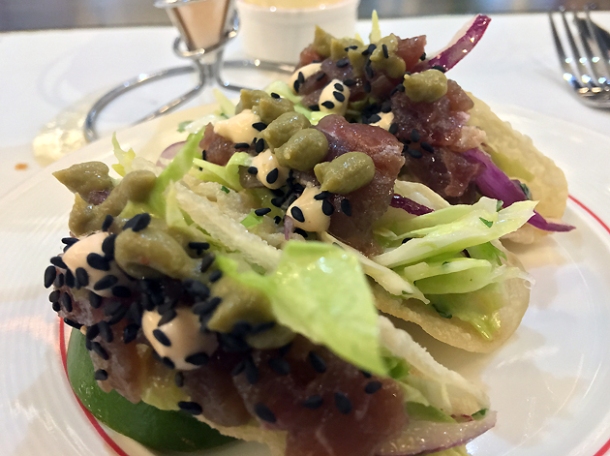 I always knew 2018 would be the year someone combined prawn crackers with poke.

Clam flatbread ‘pizza’ was a pizza only in the same charmingly misbegotten way as a frozen supermarket naanzza. Like those suspect ‘treats’, this pizza was underwhelming rather than actively awful. The flatbread base wasn’t bad, just not anywhere as elastically soft and tearable as a good Neapolitan or Roman pizza. The clams added little apart from a fleeting brininess, leaving it to the relatively creamy, somewhat caramelised cheese to carry the load. 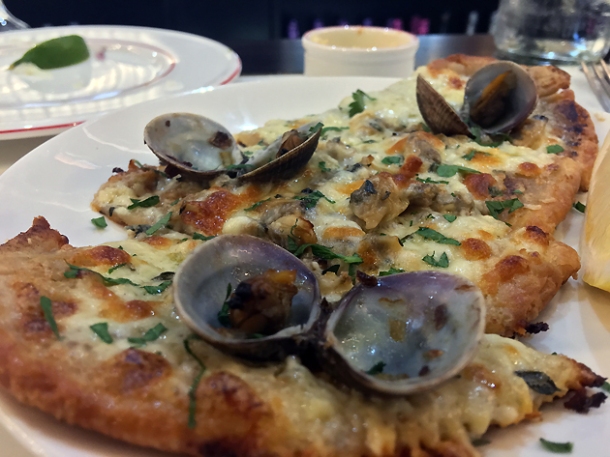 Clam, blam, no thank you ma’am.

If ‘fried chicken with caviar’ conjures up mental images of a dish dripping with fin de siècle decadence, then you’ll be bitterly disappointed by the proletarian reality. While these chicken nuggets weren’t bad, they were just chicken nuggets at the end of the day. The thigh meat used was suitably plump and juicy, but the coating had surprisingly little in the way of mouthfeel and the caviar made precious little impact beyond a fleeting brininess. 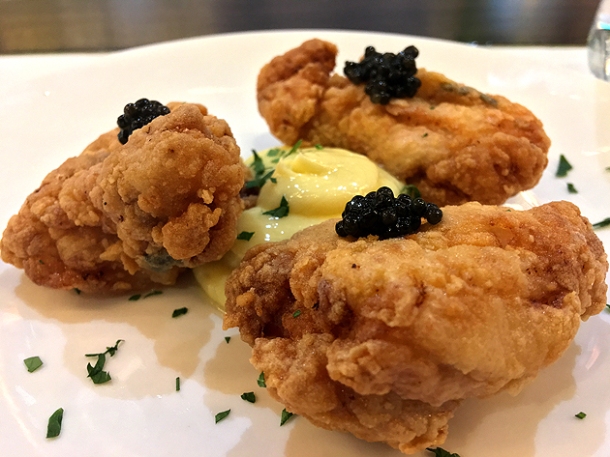 I’d rather take my chances with the chicken nuggets and taramsalata from a late night ‘bab take away.

Whatever their faults, the kitchen at Bob’s Lobster does have a clear affinity for its deep-fat fryer. Although the taste of fruit in the banana doughnuts was slight at best, these crisp, fluffy, puckered morsels were still enjoyable. 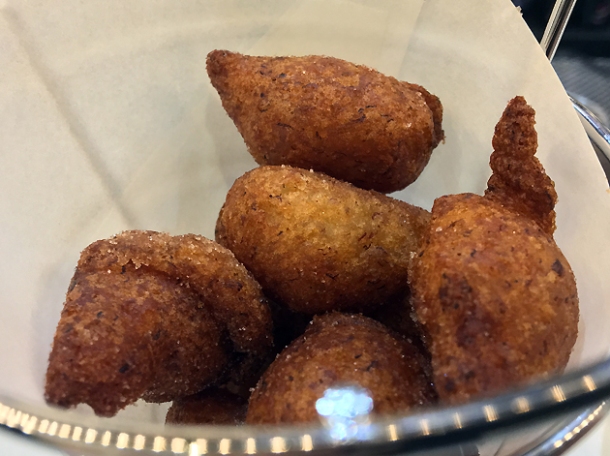 Is a doughnut still a doughnut if it doesn’t have a hole in the middle of it?

The miniature lobster roll was just as good – and just as small – as it was before. 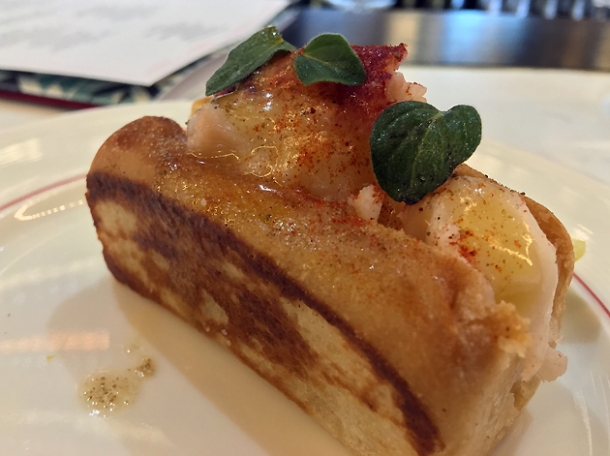 The seafood platter was, on the whole, a pitiful affair. Oysters were lip-shrivingly salty, while the ceviche largely consisted of olive oil and cheap diced vegetables. On the ‘up’ side, chilled prawns were reasonably firm, while the meagre slices of pickled herring managed to avoid being too sweet. Rather than the bounty of the sea, it was the dregs of the deep. 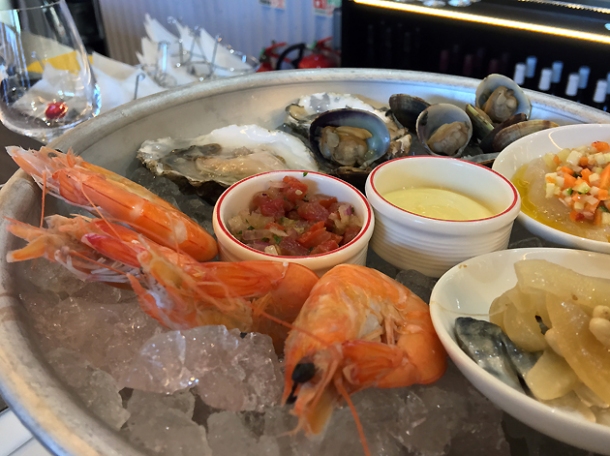 It’s more of a loose guideline than a rule, but if there’s dramatically more ice than there is seafood in a seafood platter then take that as an ominous sign. 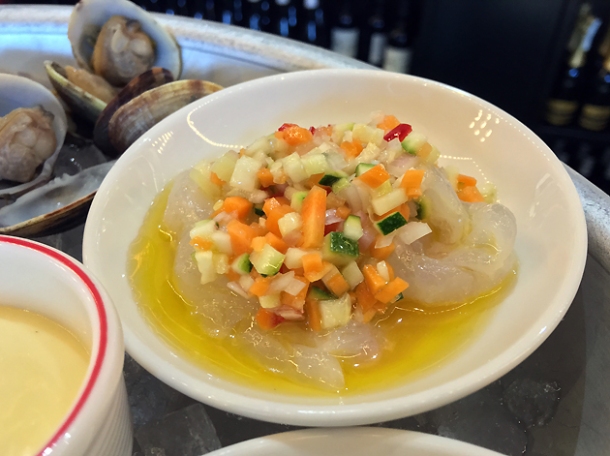 Have we reached peak call-just-about-anything a ‘ceviche’ yet? 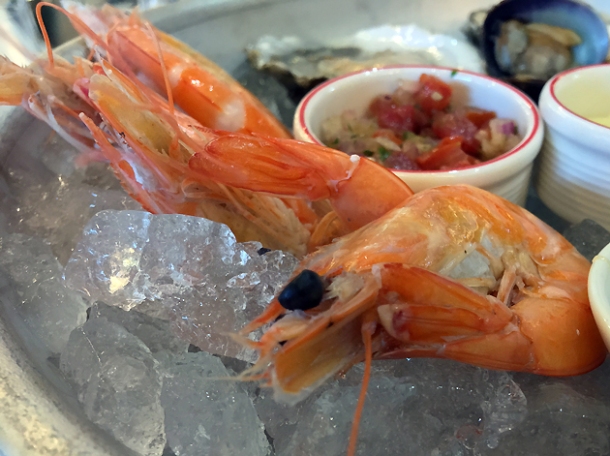 Not as much slurpable head gunk as I would’ve liked. 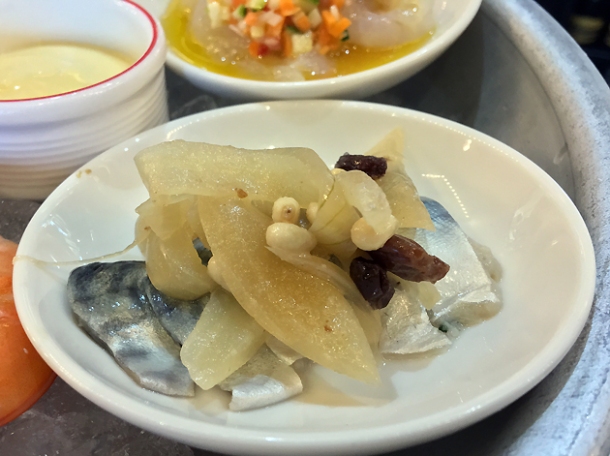 If you’re a glass half-full type, then you may look at the crab kedgeree photo below and assume that there’s more white crab meat underneath the fried egg. My sweet summer child: that’s all the crab I got in this dish. There might have been some brown meat simmered into the stock for the spelt, but it was that grain – and not crab – that made up the bulk of this main. While the spelt was hearty and filling, it couldn’t pick up the slack for the meagre crab or the surprisingly dusty drab scabs of black pudding. Most of the richness came instead from the thankfully runny egg yolk. This is the sort of dish I’d expect to be served at an acquaintence’s dinner-party – nod politely and then grimace quietly. 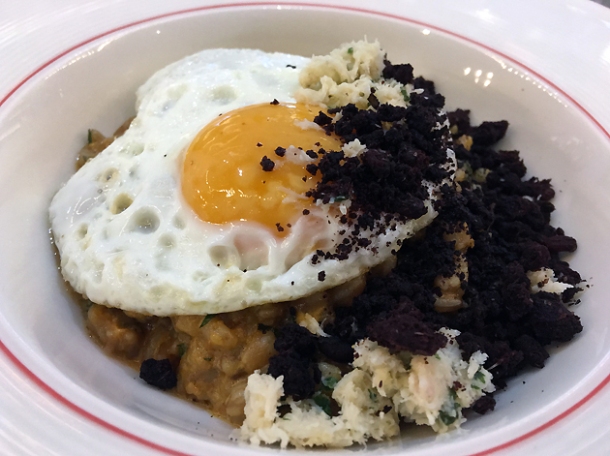 It turns out it is possible to make black pudding taste of nothing.

The baked vanilla custard was just as delightful as it was the first time around, if not quite as artfully pretty. 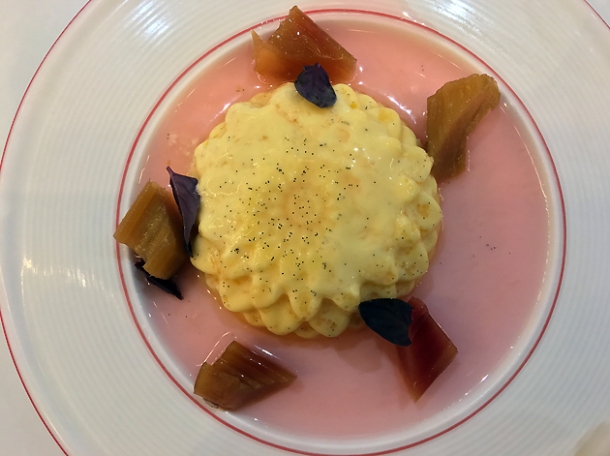 This review’s procrastination was brought to you, in part, by Florence and the Machine.

I had high hopes for Bob’s Lobster, having been a fan of their street food incarnation. While there’s some joy to be had here, from the fried whitebait to the baked trout and the vanilla custard, so many other dishes were either unbalanced or grotesquely misshapen. And then there’s the service – unless you sit at the bar, it’s woefully inattentive.

It pains me to say it, but this runt should be thrown back into the ocean until it’s grown up into a proper fish. It’s for its own good.

What to skip: Almost everything else

Reservations? Yeah, if you want.

Average cost for one person including soft drinks, but excluding tip: £40-50 approx. (£15 more if you ill-advisedly order the seafood platter)