For many people Bodean’s is syonymous with American-style barbecue in London, but that doesn’t mean the food is actually any good. As I discovered in my original BBQ group test, the Tower Hill and Fulham branches of Bodean’s were distinctly middling, average and underwhelming – and that’s before you consider all the barbecue restaurants that have opened since then.

I live in eternal optimism that Bodean’s will one day live up to its billing, but these hopes were dashed by the chain’s new Covent Garden branch. Occupying the premises that once housed Mishkin’s, it fits the decorative template established by previous Bodean’s – wooden panelling, cow skulls and booths. All this made the small space feel more oppressive than clubby.

No light at the end of this tunnel.

Despite pre-opening PR that claimed the Covent Garden branch would focus on Kansas City-style barbecue, the menu is almost an exact copy of the menus used at other Bodean’s branches. Enquiries about any potential specials, where such specialities might be found, was met with either bafflement or referral to the ‘specials’ section of the menu which contains decidedly non-barbecue dishes such as macaroni and cheese. 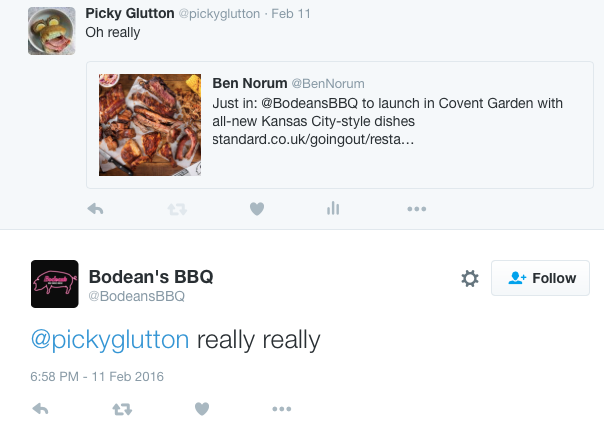 If Bodean’s put as much effort into its barbecue as it does into its social media snark, it would still be dire.

With the absence of more Kansas City-style specialities, I was left to revisit the usual barbecue mainstays on Bodean’s menu. Baby back ribs had a lightly seasoned bark with a hint of very mild fruity sweetness. The meat underneath was bland and uninteresting though, save for a hint of gammon-like denseness towards the bit of pork belly left attached to this cut of meat. 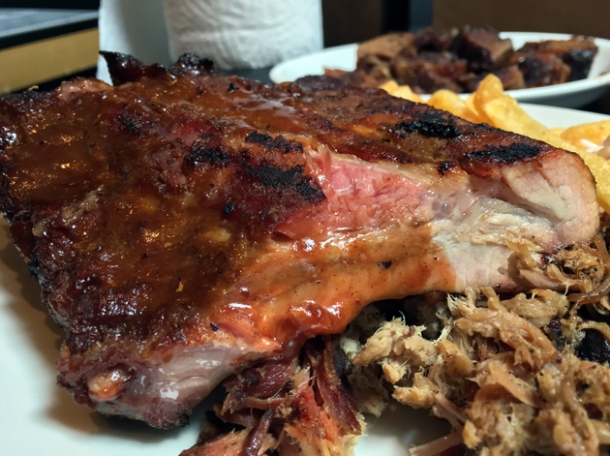 Backs to the wall. 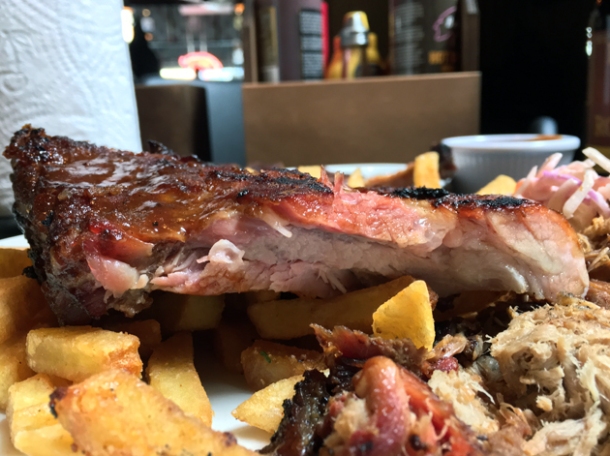 Pulled pork was firm, but a tad dry. This mild dryness wasn’t as detrimental as the almost complete lack of fattiness and indeed any other form of character. If any sort of rub had been applied to this pork either before, during or after smoking, then it was a very thin and inconsequential application. 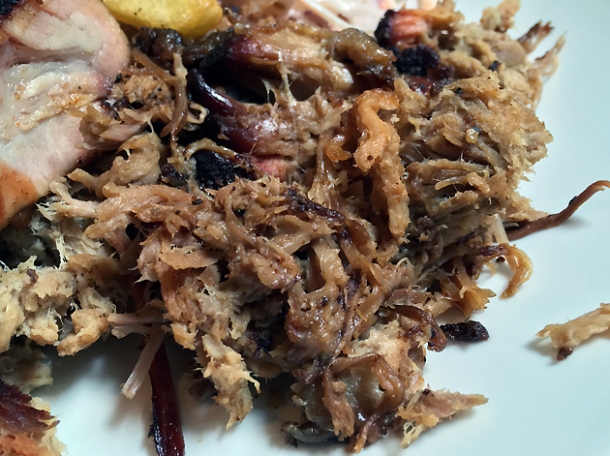 Surprisingly, the burnt ends weren’t half bad. Although not the best burnt ends I’ve ever had, the moist chunks were occasionally fatty, smoky and sweet – even if only lightly so. The beefy chunks were a little too reliant on the sharp and lightly spicy sauce for flavour, which I opted to have on the side instead of drizzled all over.

A side of coleslaw was surprisingly tart, firm and not at all cloying. Fries were crisp, crunchy and free of excess oil.

Given the small number of covers at the Covent Garden Bodean’s, the branch uses Qudini to manage queues. Given the receptionist your mobile number, and you’ll receive a text alert once your table is ready. Alternatively, you can keep track of your place in the queue using a mobile web interface. Either way, it enables you to queue virtually in the comfort of a nearby pub or coffee shop.

It’s a sad barbecue restaurant when the queuing system is better than the ribs.

A starter of pork spare ribs had a reasonably dense and smoky bark, but surprisingly little meat and even less fat. All this made for a desperately bland and unsatisfying appetiser. 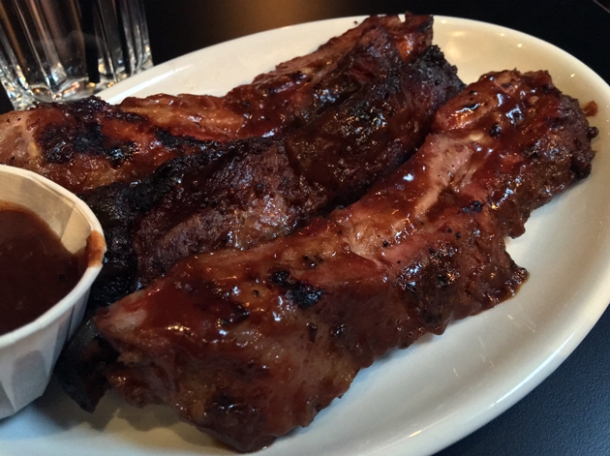 The beef short rib was just as dispiriting, if not more so. There was a very mild hint of moreishness to the soft bark, but it was ultimately too transient to leave much of an impression. The meat underneath was moist and tender, but grey and flavourless with very little fat and what meagre collagen present was too waxy and hard to be enjoyable. All this made for such dull, monotonous eating that I ultimately couldn’t finish the short rib. Instead, I had the leftovers boxed up and gave the takeaway to the first homeless person I saw on my way home. 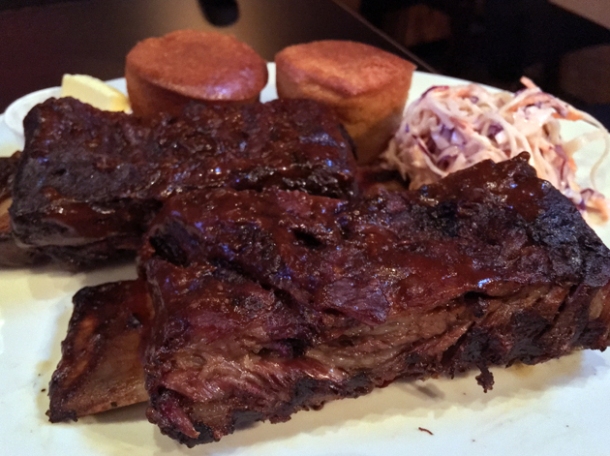 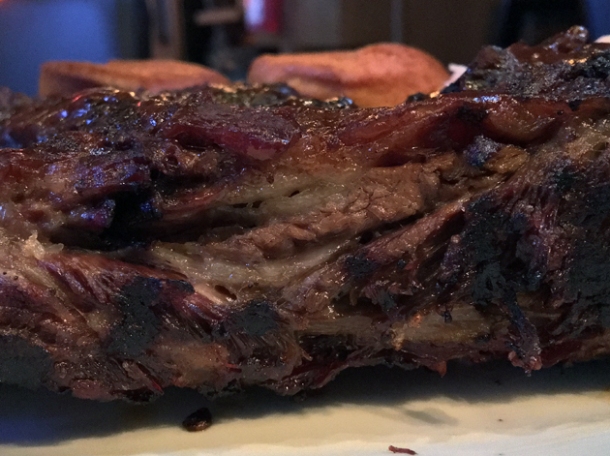 The coleslaw remained unchanged. Cornbread muffins were soft and fluffy, but the nutty sweetness wasn’t nearly as strong as it should’ve been.

Bodean’s isn’t bad. There are far worse barbecue restaurants in London, such as Low, Slow and Juke, Grillstock and Bukowski Grill. Its dreary, lifeless mediocrity is nonetheless depressing, given that the chain has had so many years to get it right. As a chain, it does have the advantage of having lots of convenient locations but even this advantage is being chipped away. A growing critical mass of higher quality barbecue restaurants have opened up across the city from Soho, the City and Shoreditch to Whitechapel and Covent Garden itself. Go to Bodean’s if you can’t a table somewhere better, barbecue or otherwise, but don’t kid yourself that this is somehow the pinnacle of the American smoked arts. Bodean’s seems intent on wallowing in its own middling inferiority. Leave them to it.

What to order: Possibly the burnt ends and pulled pork

Reservations: not taken, except for large groups