Not a Cornish pasty in sight

A lot of gastropubs are restaurants in all but name, but The Newman Arms in Fitzrovia stands apart from that annoying trend. It’s actually a boozer with a tiny downstairs drinking den that gets so packed out (especially on Thursdays and Fridays), that the crowds spill out onto the street with more people outside than in.

The upstairs dining room is far less well-trodden, so you could easily wander up for a bite after having a drink (unlike some so-called pubs) – especially as the management sets aside some tables for walk-ins. There are only about 30 covers though, so booking ahead is still a good idea. Although the background music is very eclectic (in a good way), it still feels like a traditional old pub. This is due to the charmingly old-fashioned decor and, if you sit in the corners, the occasional whiff of mustiness that evokes decades of misspent evenings, spilt pints and ruddy-cheeked guffaws.

They card you at the door. If you have a Nando’s receipt on your person, you’re automatically barred.

Apparently, this pub was once frequented by George Orwell and, before that, was a brothel. An Orwellian brothel. Now there’s an image.

The Newman Arms, under previous management, used to serve pies (which I’d never been fond of until recently). The changeable menu is completely different now – short and sweet with just three courses, eight or nine dishes in total, based around fresh Cornish produce. ‘Seasonal British produce’ has become almost cliched in its overuse, but with The Cornwall Project those words mean something.

My first meal started off a little shakily. Lightly pickled shiitake mushrooms and baby carrots were both tender. The musky sweetness of the cheese crumbled on top and the more familiar sweetness of the carrot puree both felt a little out of place though, while the crushed hazelnuts added little. It was pleasing enough, if more of a large, somewhat haphazard amuse bouche than a proper starter.

A few of the herbs used are grown in window boxes. Peer out of the windows and you can just the see the kitchen of a mediocre Côte just across the road.

If the starter was a wobbly foal finding its legs, then the main was a thoroughbred bolting straight out of the gates. Rather than having the earthiness I would normally expect, the lamb was gently sweet with a delicate aftertaste. This, combined with its exceptional tenderness, gave it a bewitching veal-like quality. A slightly tough but deliciously salty bit of connective tissue was still attached, while the meat was tastefully complimented by gently zesty nasturtium, umami seaweed sauce and crisp mini turnips. Exceptional. 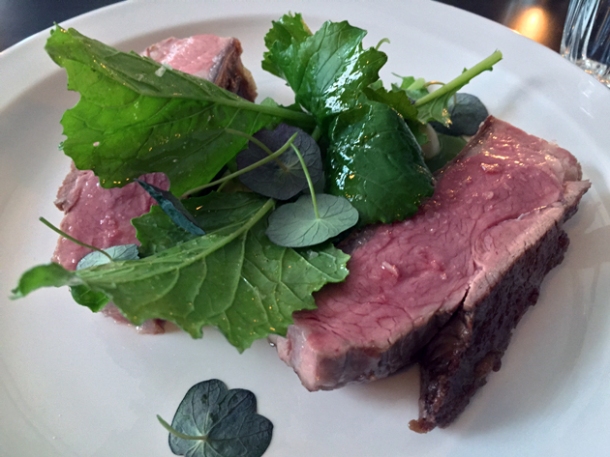 Things dipped back down again with the dessert of blackcurrant and beetroot cake. Although the cake was airy and tightly crumbed with a malty crust, it was too dry and bland for my liking. The accompanying orange yoghurt was wispy and light, but only mildly citrusy. A whimper rather than a bang. 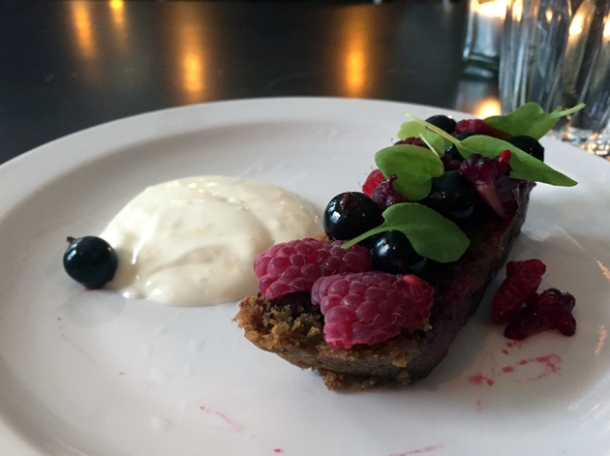 I’m not sure beetroot belongs in cakes.

Much like the lamb, the mackerel subverted my expectations to delicious effect. Although the sashimi-esque slices of mackerel only had occasional hints of the usual punchy taste I would expect from this fish, I didn’t mind as its sweetness and delicate aftertaste was reminiscent of bass. This was neatly complimented by the delicately herby juice, lightly crunchy almond pieces and dill-like herbs which also had a very clean after taste.

Although the glazed short rib didn’t have quite the same depth of flavour as its barbecued American counterparts, it was still a remarkable cut of beef. Served off the bone, the cow flesh barely needed a knife with slices pulling away in tender shreds. Its earthiness was unexpectedly delightful, while the crisp crumb provided a contrast in texture. The side of French beans hadn’t been overlooked – neither too soft nor too hard, they were also lightly buttered and salted. 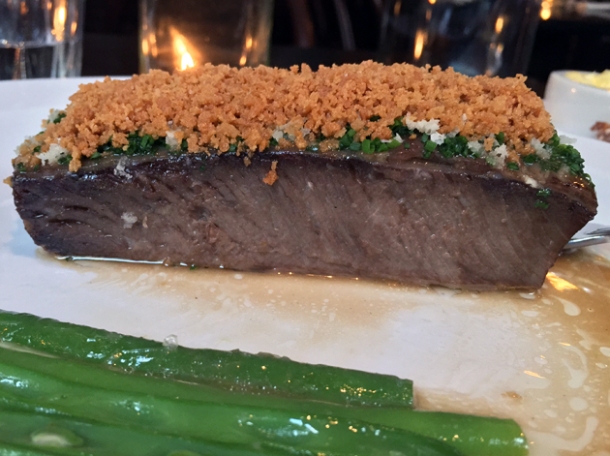 Sorry Cornwall, but you’re never leaving the union. Ever.

The cheese board was headed up by a decent quality stilton. The washed rind semisoft cow’s milk cheese was brie-esque, if not as rich, but nonetheless had a pleasingly musky aftertaste and a lightly elastic texture. My friendly waiter described the Coolea has gouda-like, but its nuttiness was more reminiscent of a gruyere in my mouth. It’s a pleasant enough cheeseboard, but my carnal predilection for French cheeses remains unswayed. 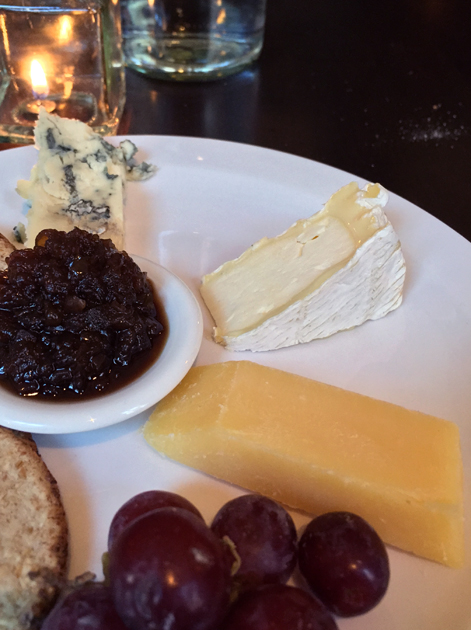 Three is a Crowd

My third and final meal at The Newman Arms was seafood heavy. Crisp-skinned and buttery red mullet would’ve been only half as good without the firm broad beans and the vinaigrette which managed to be crisp and refreshing, as well as have a distinctive syrupy tartness.

No, not that kind of mullet.

The fresh and meaty turbot was cooked just so, but they were almost upstaged by the tender and fluffy new potatoes which had a smoky, bitter booziness that was profoundly satisfying. The baby fennel was just as well chosen and prepared. As well having the aniseed-y taste you would expect, it also had grassy, salty and sweet hints that was simply top notch. Everything came together beautifully. 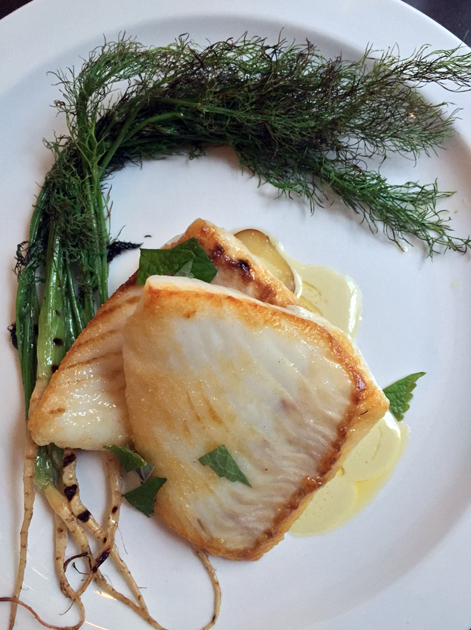 The almost cupcake-sized cherry and almond cake was tightly crumbed and sweet, but this came from an excess of sugar in the cake batter rather than from the bland cherries. Although there was a strong taste of almonds, this came not from the cake itself but from the slices of toasted almonds scattered on top. At least the smooth and creamy vanilla ice cream actually tasted of vanilla, making up for the so-so cake. 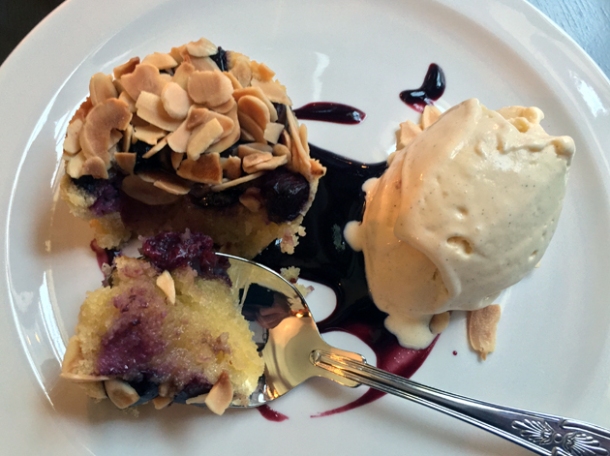 In some ways The Newman Arms reminds me of Pidgin – small premises and a tiny rotating menu of exquisite meat and fish. The Cornwall Project’s superb animal flesh was made even more delectable by some truly skilful cooking. But like Pidgin there are some notable hiccups – especially the desserts which feel like worthy attempts, but which fall far short of the mark. Even so, what the kitchen has achieved is remarkable. I used to complain about the dearth of really good gastropubs in and around the West End, but no more. Even with its somewhat restricted opening hours, the Newman Arms has set a new standard for this part of town and it’s a very high bar indeed.

Name: The Cornwall Project at The Newman Arms