The City is the last place I’d expect to find a small and characterful restaurant tucked away on a small lane, but that’s exactly what I found in Gunpowder. This narrow Indian restaurant just has space for around two dozen covers – be prepared to hear every detail of your neighbour’s conversations, whether you want to or not.

The cramped conditions are worth putting up with with though. Before we even get to the small and quirky Indian dishes, there’s the chatty, friendly and informative service which actually seems to care whether you’re having a good time or not. It sounds like a small thing, but London’s hospitality industry can be surprisingly inhospitable at times.

A venison and vermicelli doughnut sounds like a prank or the subject of a grotesque eating competition, but it’s really just a fancy spherical meat pie in the scotch egg tradition. The incredibly thin and crispy shell wasn’t at all oily and was clearly made up of little vermicelli noodle strands. It was so lovely, the venison mince inside inevitably couldn’t live up to the opening act. Although reasonably dense, it was a tad dry and characterless and thus dependent on the fruity dipping sauce for flavour. 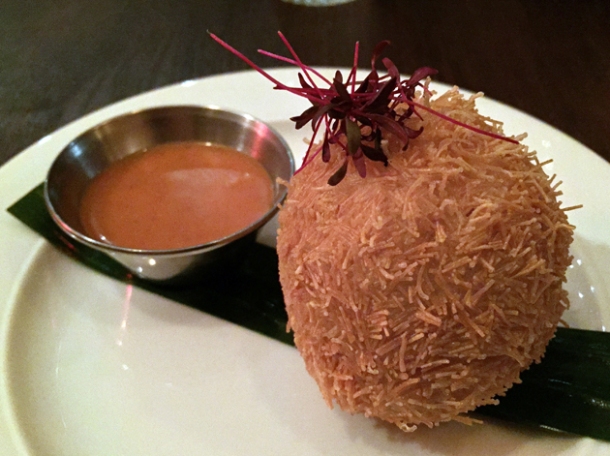 It’s not really a doughnut. 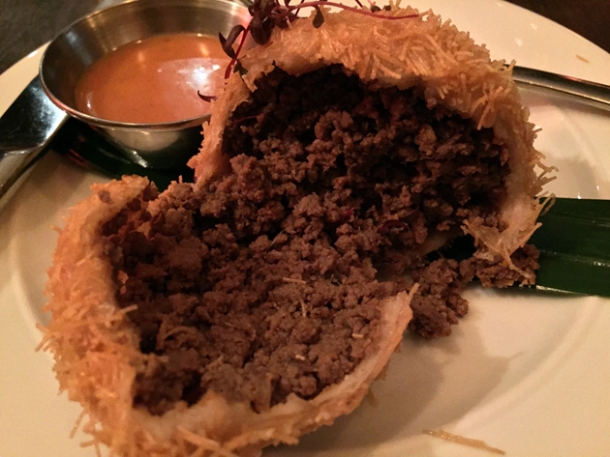 The pulled duck also failed to live up to its meaty billing. Although not mushy, the meat was still too soft to leave much of an impression. It was still enjoyable enough though thanks to the gently fruity sauce and the bread it all came wrapped in – a slightly sour, thin and spongy flatbread akin to Ethiopian/Eritrean injera. 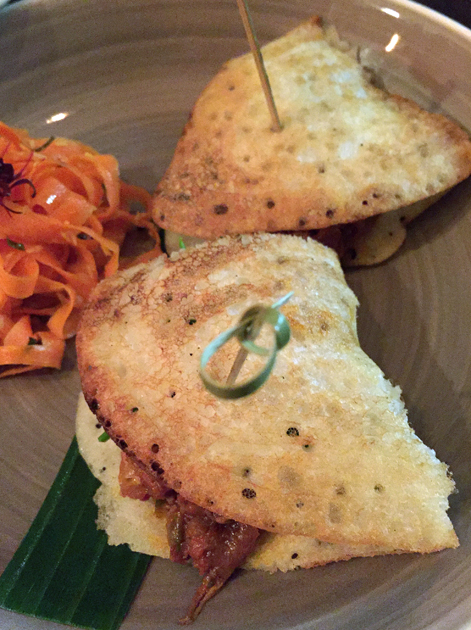 I eat a lot of sandwiches. 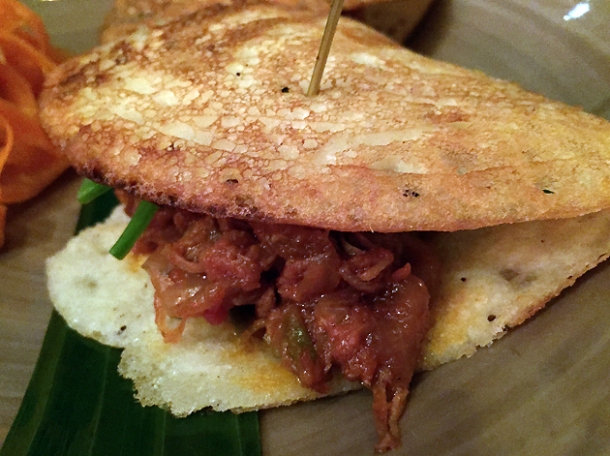 Why does every meat have to be pulled these days? Stop jumping on bandwagons.

The saag paneer might be very familiar, but its smooth and satisfying execution was a step above your average curry house. Firm and milky cubes of paneer with a hint of squidge served amid a sea of creamy fresh spinach. Homely and warming but certainly not lazy cooking. 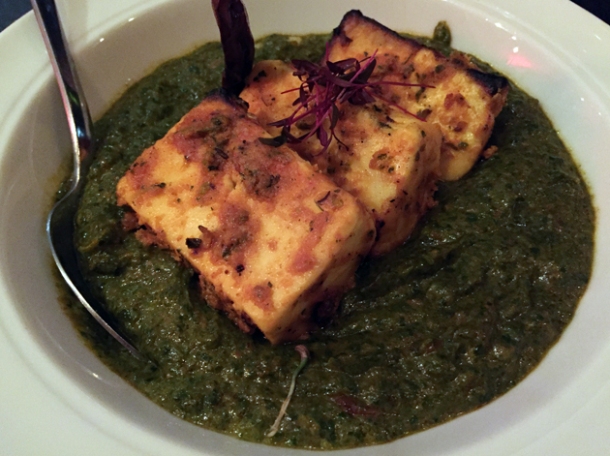 You can have rice if you want. But that would leave less room for more paneer.

The apple and fig crumble was allegedly baked in a tandoor oven, but it was a rather tame affair with mildly tart apple, and mostly apple with little fig in evidence, topped with a loose-grained muesli-esque topping. Far, far better was the banana curry leaf ice cream – the sharp sweet tang of the fruit combined with a distinctive and aromatic spiced edge. Sod the crumble, just give me more of this ice cream. 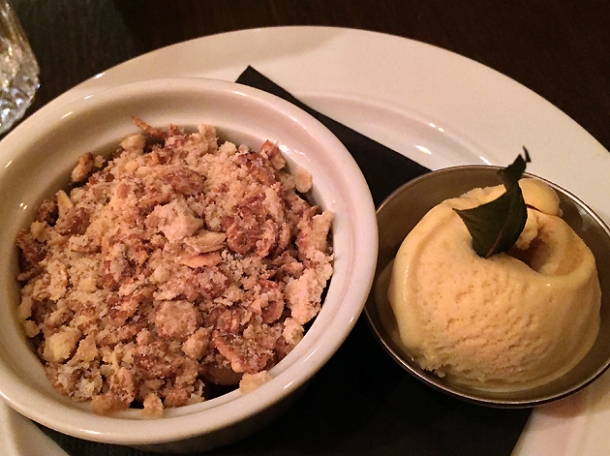 If you can’t use curry leaf at least as good as it was used here, then you’ve lost already.

I love some good wordplay and some bad, cheesy wordplay too. The rasam ke bomb stays on just the right side of good. Shaped like a stereotypical spherical cartoon bomb, this light dosa-esque crisp with filled with light and fluffy lentils. It really has to be taken with the accompany consomme though. The gently spiced mustardishness of the broth greatly enhanced the crisp filling, bring out a mild mintiness and other herby hints. It’s a delightful combination and an unexpected one too given the inconsistent nature of my first meal at Gunpowder. 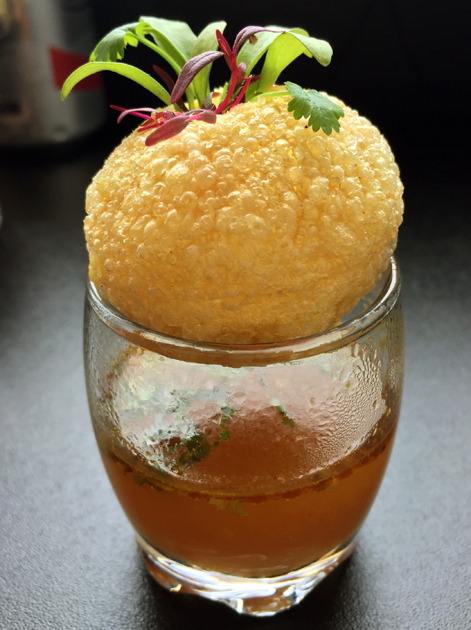 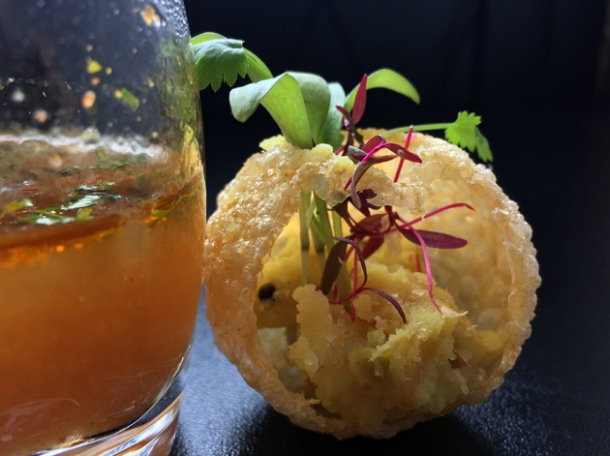 Nearby stalwart Tayyabs is famed for its lamb chops (and rightly so, even if their reputation is inevitably overrated). While literally lacking in the sizzle and smoke razzle dazzle of Tayyab’s lamb chops, Gunpowder’s chops are arguably just as good if not better. The gently crisp and yielding crust admittedly gives way to reveal some merely competent meat, but it’s the wet rub that’s the star here – mustardy and peppery with a gently sweet aroma. A real class act. 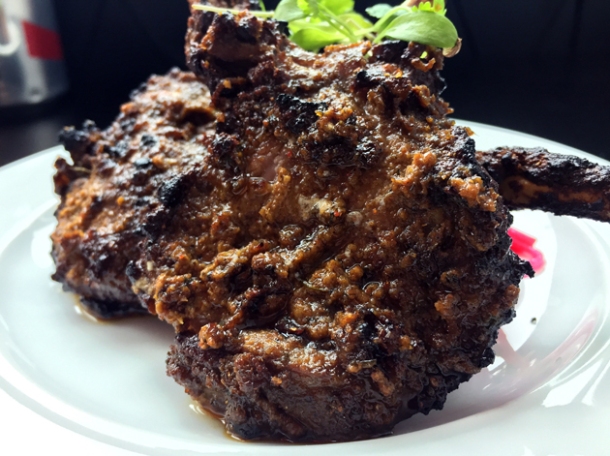 Soft shell crab is usually more about the convenience of not having to grapple with deshelling than the taste or the texture, but Gunpowder’s deep-fried version shows that this doesn’t have to be the case. Thin legs encased in a crisp, light and surprisingly flavoursome batter – almost certainly lentil flour – were surprisingly milky and even creamy. The pair of spicy and zesty sauces on the plate weren’t really necessary given the exemplary nature of the crab legs, but the gently tart and earthy pickled beetroot served on the side was a nice palate cleanser. 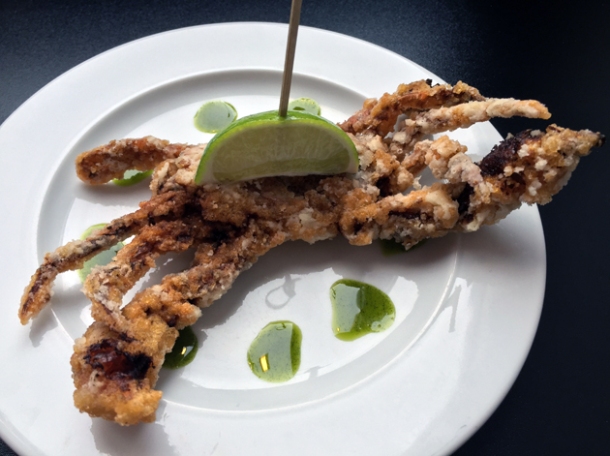 Been feeling a bit crabby recently.

The rum pudding was more of a lightly boozed-up bread and butter pudding. The pudding itself was mighty fine – light, pillowy soft, voluminous and served in a thin yet eggy custard. The one surprising disappointment was the accompanying ice cream – lightly spiced, it was nonetheless ultimately quite bland and a bit too icy and crunchy too. 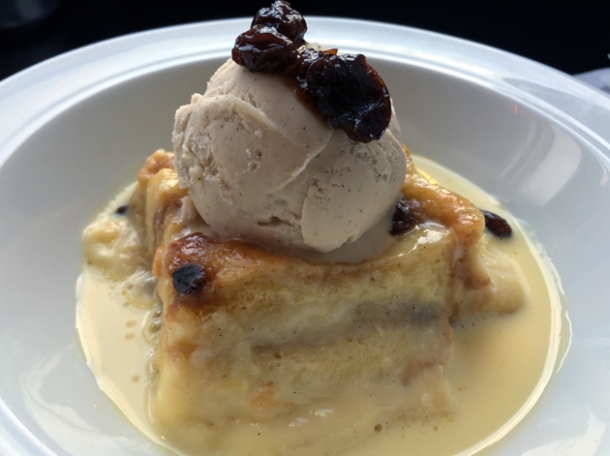 Gunpowder’s pork belly dish is apparently derived from Indian-Chinese cuisine (that’s actually a thing, look it up) with strips of fatty rind-like pork belly coated in a sweet and sour sauce. The thin and tangy brown condiment was actually a balance of sweet and sour rather than just a carpet bombing of either lip pursing sweetness or sourness. The stodgy crunch came from the fried strips of belly rather than some misguided deep-fried batter, but you’re still more likely to enjoy this dish if you’re already a fan of anglicised takeaway sweet and sour pork. Which I’m not. Still, I couldn’t argue with the crisp, tart and refreshingly fruity garnish. 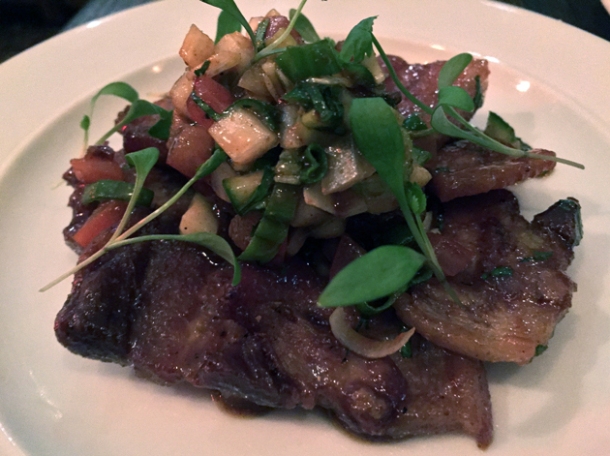 Your mileage may vary.

Far better was the fish cooked in banana leaf. Delicate yet coarse, the satisfyingly earthy catfish-esque patty was covered in a coarse and thick wet rub full of lemongrass-ish flavour. 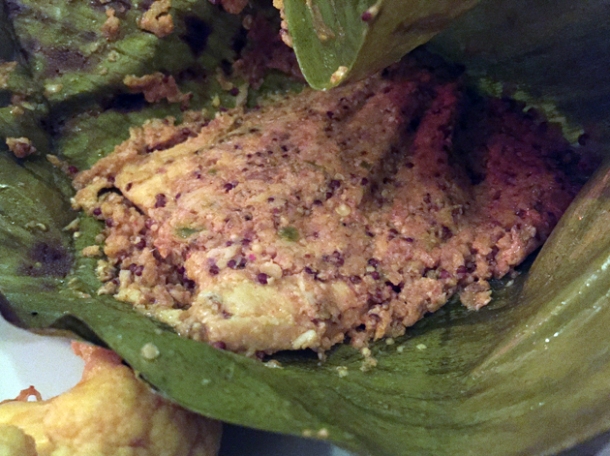 The lamb shank is probably what you’d feed to your doddery in-law who’s never had Indian food before and thinks two dishes for a tenner at the local pub are the height of eating out. Tender meat with an earthy funk was served on the bone with some gelatinous connective tissue still attached. The modestly fruity sauce lightly flecked with spices was a little too subtle for its own good, but meat this good served with some fluffy mash on the side is more than good enough on its own. 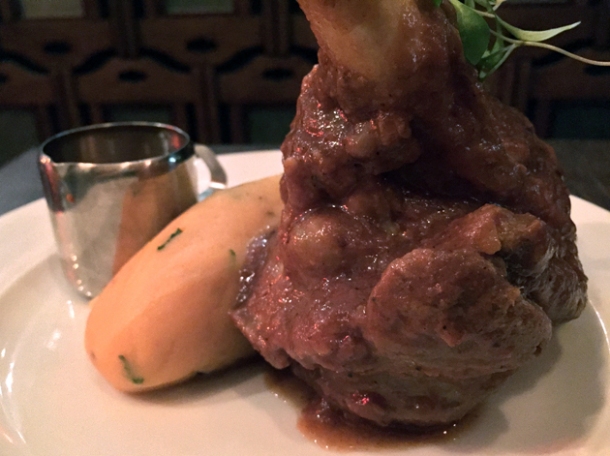 A layered chocolate cake with a molten top layer and a soft and spongy lower layer was by no means bad, but it was ultimately overshadowed by the custard with its hints of ginger, cinnamon and cloves. Spiced custard – it’s the way of the future. 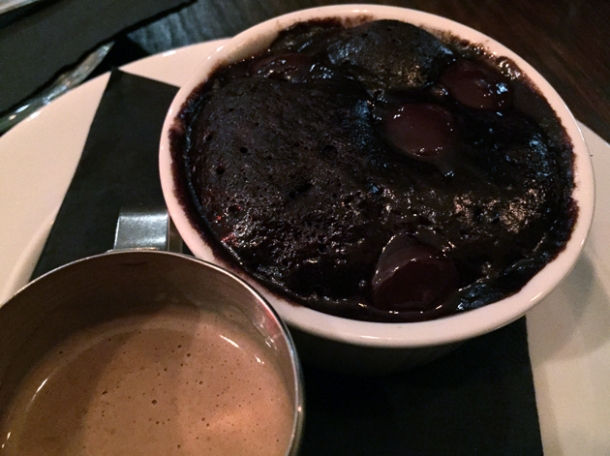 Spice is the variety of life.

Gunpowder is physically caught in the middle between the City and Whitechapel. The far glossier, more spacious and more expensive eateries of the former, such as the Cinnamon Kitchen, offer a more comfortable and spacious experience. Meanwhile, the very cheap and cheerful grill houses of the old East End, like Tayyabs, have more familiar and more accessible dishes.

Yet Gunpowder manages to carve out its own identity and holds its own. While its somewhat hit-and-miss menu needs refinement and the management probably wishes it had bigger premises even more than I did, when the quirky and imaginative dishes hit the spot, they do so wonderfully. You should go.

What to skip: Pulled duck

Average cost for one person including soft drinks and service: £35-40 approx.