Look beyond the marketing spin at this Gunpowder threequel

As the end of the year approaches, so does the anniversary of this website and so my feeble mind inevitably ponders all that it has accomplished. While I would like to think that I’ve helped at least a few Londoners (and visitors too) at making better dining choices since I started this site back in the halcyon days of early 2011, I really have no surefire way of knowing. What is certain are the reams of words that I’ve written, the people I’ve annoyed on Twitter (all the right people in most cases) and the torrid and tempestuous relationship between my loquacious appetite and my waistline.

The handsome people behind Gunpowder, on the other hand, have achieved a great deal in the two years since it opened. That small but almost perfectly formed Indian restaurant in Spitalfields has been awarded a Bib Gourmand. It spawned Madame D’s, a Himalayan spin-off just across the road which has been warmly received by others, if not by me. Gul and Sepoy is the third restaurant in this burgeoning family, with a fourth apparently in the works. The breakneck entrepreneurialism of this Gunpowder empire is nothing if not remarkable.

Gul and Sepoy, like Madame D’s, has a narrative gimmick albeit one that induces less exasperated eye-rolling. The menu apparently consists of dishes from both the royal courts of northern India (the ‘gul’) and the more rustic cooking of the humble Indian squaddie (the sepoys). Although I’m sceptical of conceits and concepts such as this, I have no idea if any of that marketing spin holds water. In the end, I don’t think it really matters.

A starter of nut patties came in a puddle of sour, tamarind-based curry sauce and marked with wafers of jackfruit. The latter added little though and in the end these morsels tasted similar to the yam and paneer chaat on the Sepoy side of the menu, albeit in a far less accomplished way.

Although the prawns could have been springier and firmer, the pleasingly smoky and peppery marinade helped paper over these textural deficiencies. Pickled carrots helped counterbalance the relative richness of the crimson rub. 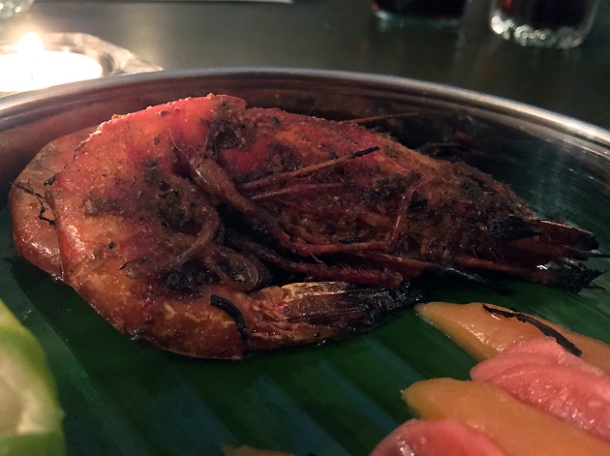 Although the sauce gracing the three bird korma wasn’t as sickly sweet as the worst korma sauces, it was still lacking. The only thing worse than the creamy, dull and somewhat cloying sauce was the meat itself. The terrine-style arrangement of poultry was strikingly bad. It was far too dry as it transitioned from one bland smooth-textured coil of unidentifiable bird to another bland, grainy textured coil of unidentifiable bird. Ugh. No. Just no.

The partridge leg was a far superior poultry dish. The dense meat, almost like venison or boar in its gamey quality, meshed surprisingly well with the creamy, gently spicy sauce dotted with herby undertones. 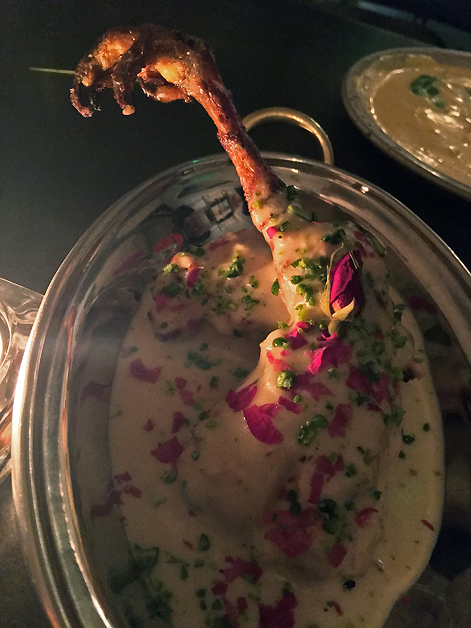 I’ll get you next time, Gadget!

Big button mushrooms skewered with tenderised peppers and sharp onions, despite their bouncy firmness, would only have been half as enjoyable without the moreish glaze.

Interestingly, all the desserts are listed on the Gul side of the menu (online, at least). While billed as a gulab jamun, what arrived took the form of a mildly exotic sponge sandwich. The milk-based, rum-soaked dough made up the ‘bread’, but was a bit too dense and stodgy for my liking. It wasn’t sweet, airy or light enough. The cream inside had a familiar taste that I couldn’t quite place, while the raspberries left much to be desired. Overall, meh. 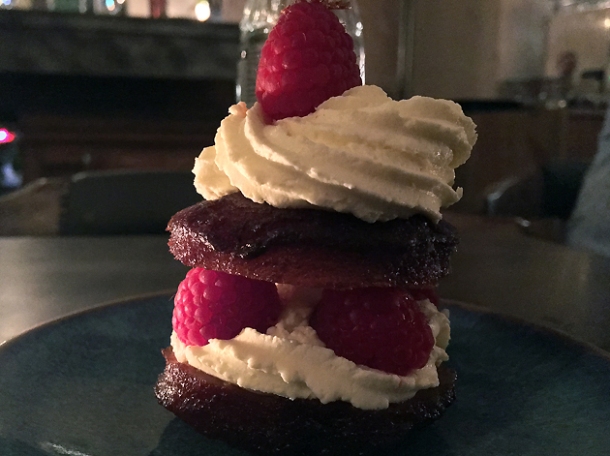 Milky kheer wasn’t too cloying, with the small grains in this rice pudding staying loose and surprisingly smooth. Although the selection of blackberries, blueberries and red currants didn’t have much to say for themselves individually, they did add pleasing if subtle variations in sweetness to this dessert which helped prevent the large portion from becoming too repetitive mouthful after mouthful.

Although described as a rasmalai, what arrived bore little resemblance to that traditional creamy, cheese curd-based dessert. The smooth dark chocolate lozenge, which should really have had a cheese curd at the centre, possessed only a passing bittersweetness which will please dullards who expect their chocolate to be brown and little else. The most distinctive thing here was the small halved kumquat with the passing taste of cardamom. You could do far worse as safe, conservative and crowd-pleasing chocolate desserts go. I’d still rather have a more traditional rasmalai though.

Yam and paneer chaat wasn’t what I expected at all. Gently sweet, nutty and soft yet starchy tube-shaped lozenges came accompanied by fluffy sev and bathed in creamy and sour, possibly tamarind-based sauces. It was almost like a Christmas nut loaf in miniature, but, you know, actually edible. It was more than edible – it was a stomach-patting delight.

The staff aren’t overly chaat-y. Which suits me just fine.

‘Clams masala’ is a word pairing that needs to occur more often. Springy, lightly chewy clams came bathed in a moreish, onion-y sauce dotted with potent little chillies. This dish proved to be far more well-rounded and satisfying than the prawns on the Gul side of the menu. 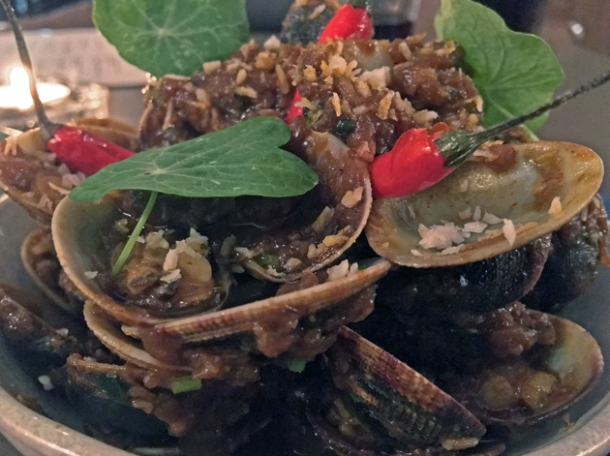 It’s not that I clam up. It’s just that cat videos on my phone won’t watch themselves.

‘Potted’ pork wasn’t just a homage to the traditional pate-like form of preserved meats – the pork actually arrived in a flower pot! The moreish curry formed the ‘soil’, with the tender, periodically unctuous meat scooped out of the pot with crackling-like crackers. Green sprigs completed the visual joke. Although this curry would only have been half as enjoyable with a more conventional presentation – a few more unctuously fatty cuts would’ve gone a long way – I’m not going to take issue with something so charmingly whimsical.

I would say this review is a ‘potted guide’ to Gul and Sepoy, but that would be shoehorning one pun too many.

Seekh-style chicken kebabs were cooked just-so, the moist and tender cubes of chook melding neatly with the sprightly, zingy marinade. 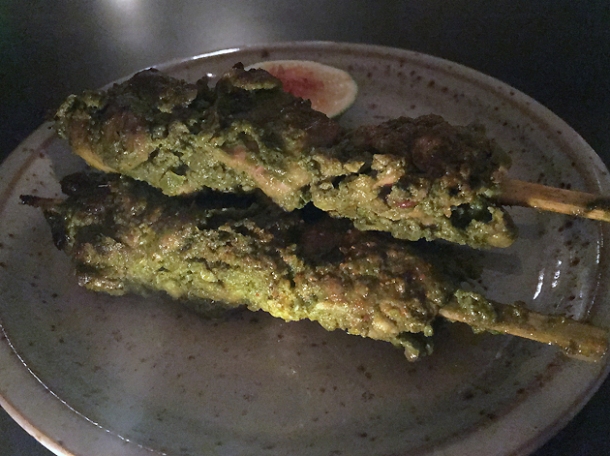 Firm and gently chewy escargot, served out of their shells, had a pleasingly herby, floral undertone. The sprightly sev-like rice was a well-chosen accompaniment as was the sharp and lightly tart pickled radishes. It’s not the best escargot you’ll ever have, but it’s still well worth having.

Service here is pretty quick. It certainly doesn’t move at a snail’s pace.

Smooth and delicate triangles of paneer were served in a lightly sour and peppery rogan josh-style sauce. While far from bad, it wasn’t especially memorable with both cheese and sauce overshadowed by far better paneer and rogan josh dishes available elsewhere.

This review’s procrastination was brought to you, in part, by cat videos on my phone.

The mutton fry arrived in the unexpected form of a pot pie. The delicate skin-like crust was dotted with caramelised onions that provided an occasional sweet crunch. The meat underneath did not disappoint – delicate yet tender and buttery, it proved be utterly addictive.

If Gul and Sepoy’s eponymous self-declared dichotomy means anything at all (and I’m still not convinced that it really does), then it’s certainly not what many would expect with the number of pleasing dishes on the Sepoy side far outnumbering those in the Gul camp. Either way, despite some notable missteps such as the risible korma, Gul and Sepoy’s generally accomplished cooking marks a return to form for the Gunpowder team after the okay but one-dimensional Madame D’s. It’s not nearly as good as Soho’s Kricket or Darjeeling Express, but there’s little else nearby that can rival it.

Gul and Sepoy does manage to fall in the small trap that Madame D avoided – it struggles to have an identity of its own separate from Gunpowder, with Gul and Sepoy feeling like an overflow room for its nearby, more established sibling. Indeed, at least one table hosted a group that couldn’t get a table at the much smaller Gunpowder. Living in the shadow of a more successful other – one empathises.

What to skip: Most of the desserts

Average cost for one person including service and soft drinks: £45 approx.