Biko is a glossy and sleek fine dining restaurant decked out in refined and soothing shades of beige and brown. It really could be anywhere in the world, but what it lacks in aesthetic distinctiveness it more than makes up for in service and food. The staff, whether Spanish or English speaking, were unfailingly polite and efficient. The modernist and ever-changing tasting menu purportedly combines Basque and Mexican influences. What is certain is that the kitchen definitely knows what it’s doing.

The amuse bouche of a yielding but anonymous vegetable slice in a forgettable sauce was a poor start, but things immediately picked up afterwards with the gazpacho. Mildly reminiscent of a ceviche, buttery slices of fish gradually took on a fruity quality as I made my way through the zesty soup served at room temperature. 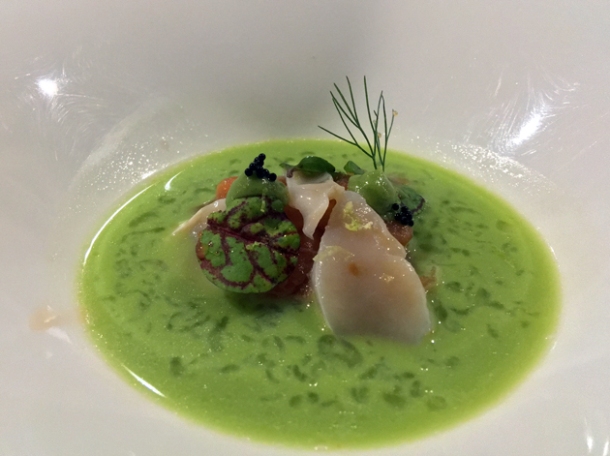 I forgot to take a photo of the amuse bouche. No big loss really.

An earthy yet light and smooth mushroom patty in scallop sauce conveyed a mild but nonetheless evocative seaside quality. The gentle salty tang of the scallop sauce was particularly interesting, bringing to mind traditional Chinese congee. 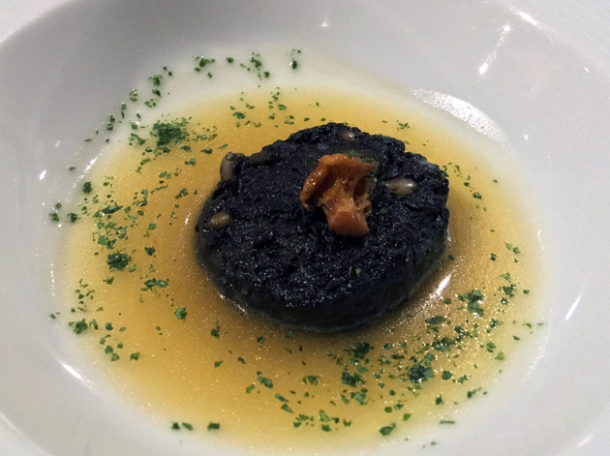 If you’re going to insist on using a mushroom as the heart of a vegetarian burger, then make it as good as this bastard here.

I was left unmoved by the baby artichokes, but the artichoke cream they came in was a different story. Its mild flavour was enhanced and complimented by peanuts, small yet crisp seeds and crisp, lightly zesty nastirtium leaves to lip-smacking effect.

Today’s procrastination was brought to you, in part, by DMX and Hadouken.

A chunk of sea bream came coated in a thin layer of squid ‘skin’ that failed to leave much of an impression. Far better was the powerfully umami squid sauce which complimented and enhanced the natural zing of the fish immensely.

A dense hunk of venison cooked rare had a lightly nutty and fruity character that was made stronger with a curious sauce that segued from roasted chestnuts to roasted apple. The garnish of pomegranate added little, but it didn’t spoil a superb meaty main. 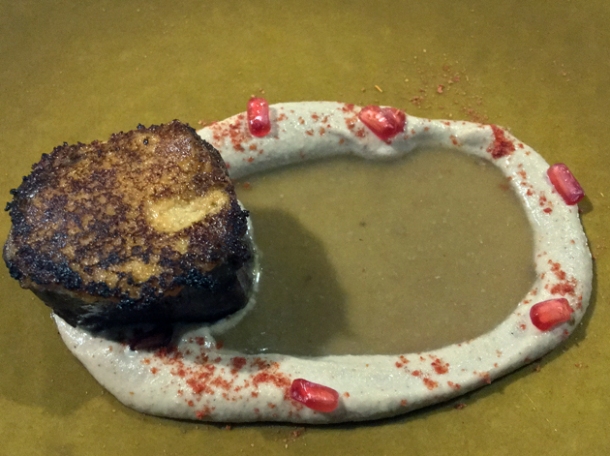 There’s nothing wrong with old-fashioned strawberries topped with cream, but Biko’s deconstructed and rebuilt version had unique, sensuous charms all its own. A light cream had the evocative scent of fresh strawberries. Underneath it were torn chunks of lightly chewy bread blessed with the taste of almonds, while a dash of what I’m pretty sure were goji berries added a bold and sharp dollop of extra sweetness. Truly excellent.

It’s not often I get to take these face-down shots.

The second and final dessert was an unusual and multilayered one – an exemplar of the kitchen’s ability to combined multiple ingredients to delightful effect. A fragile wafer came doused in chocolate, almond milk, coffee and amaranth. Although the chocolate was buried in the odd coffee flavour you only ever get in desserts and not actual coffee, this flaw mattered little in the end. The sweet milkiness of the other components and the crispness of the wafer and amaranth made this dessert resemble a muesli – a surprisingly filling and multifaceted muesli.

Although not flawless, Biko’s startlingly brilliant cooking and slick service make this restaurant a must if you’re in Mexico City.