Big and small plates of charcoal grilled and baked meat

Brindisa is one of the older tapas mini-chains in London, having sprouted as an off-shoot of a Spanish goods import operation more than a decade ago. Perhaps because its existence is therefore taken for granted, it’s rarely spoken of in the same excitable or reverential tones as more recent, cutting edge tapas restaurants such as Barrafina, The Salt Yard group or Jose Pizarro’s restaurants. Brindisa’s latest restaurant, Morada Brindisa Asador (or just Morada), has some similarities to the barbecue-focussed Ember Yard with an emphasis on dishes cooked over charcoal. But whereas Ember Yard is an unmitigated success, Morada is more problematic.

One of Morada’s biggest failings over all four of my visits was service and the ability of the kitchen to maintain a smooth, consistent pace. On my first visit, it took half an hour to place my initial order. I did receive a grovelling apology for being so comprehensively ignored, but this was followed by stifling over-attentiveness which then fell away to be replaced by another half hour wait for my dessert to arrive. On my last visit, where I was accompanied by Vicious Alabaster, Templeton Peck and Socialist Worker, there was a 40 minute lull in the middle of our meal as the kitchen scrambled to cook some of the bigger dishes on the menu that we had chosen. No updates were given – we had to pester the friendly but somewhat dopey staff for information.

These were only the most egregious examples of flailing ineptitude. Such lapses would be more excusable if they were committed by first time restauranteurs, but not when it’s the experienced operators at the Brindisa group. I expect better.

Tapas’ origins as bar food is clearly evident in the potatoes and pork. Firm, dense taters were paired with dried pork pieces that were so crunchy, they almost resembled pork scratchings. It’s an odd pairing that will probably hold more appeal if you’re slightly drunk while eating them.

Another odd couple was the tuna paired with almonds. The thin slices of cured fish were very meaty and dense, almost like beef, with a salty tang. This was sadly obscured by the powerfully nutty and crunchy almond slices. 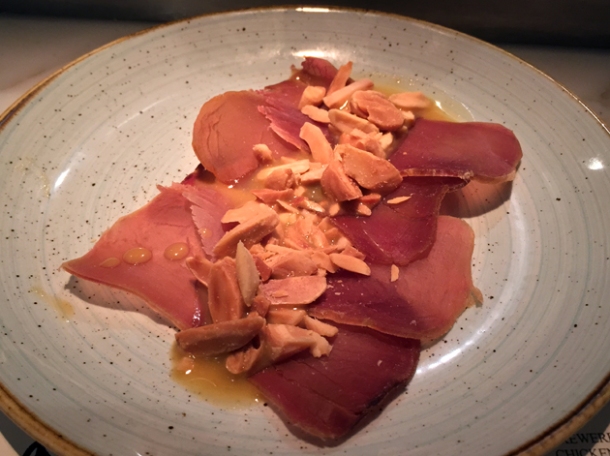 Many of the smaller charred meat dishes come skewered. The chunks of pork and pork jowl were tender, but the fat hadn’t been fully rendered and the smokiness was slight. It was still very scoffable, but the pork pieces were almost entirely dependent on salt for flavour. 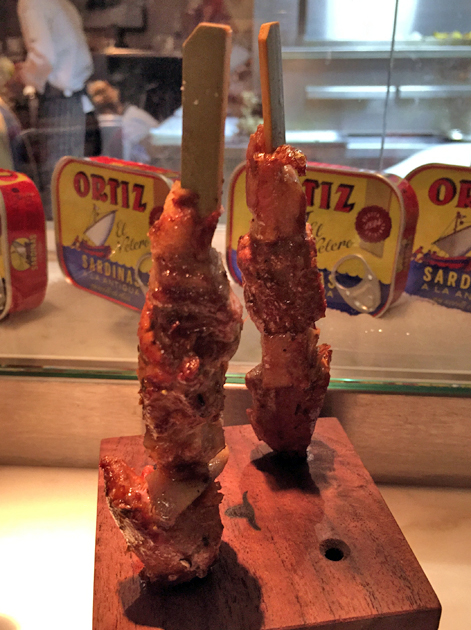 The counter around the kitchen would be the best seat in the house if the actual stools weren’t so damn uncomfortable when you’re being ignored for 30 minutes at a time. 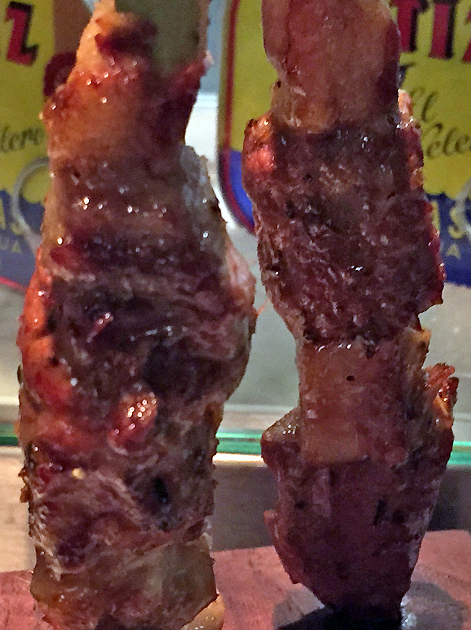 I’m ready for my close up.

The coca bread was essentially deconstructed tomato bread. Crisp, lightly chewy bread was served with the crunchy sea salt, a lightly grassy olive oil and a halved umami tomato on the side. It proved to be a tasty combination, even though the novelty of DIY got old quickly.

If you’re hoping to feast on an entire roast suckling pig like a medieval lord, then you’ll be disappointed. You only have a choice of ribs or leg and I opted for the leg on the advice of my waitress. The skin was taut, crisp and not too crunchy. Layered underneath was a thin layer of lip smacking fat and hearty, milky meat. The best part of the meat were the slivers closest to the bone as these were the most porky and unctuous. 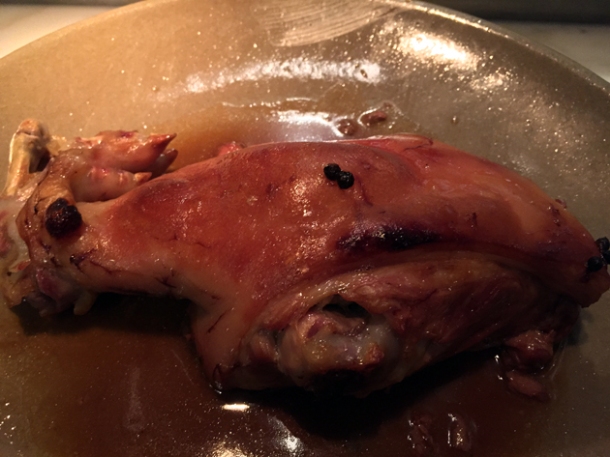 Best of all, you can use the bone as a cudgel after you’re done.

The chocolate mousse reminded me in some ways of a brownie. While soft and reasonably creamy, it also had a springy sponge-like cakeiness to it. Although reasonably rich, it didn’t have the dark bittersweetness I usually prefer in my chocolate desserts. The topping of unremarkable fruit looked nice, but added little. 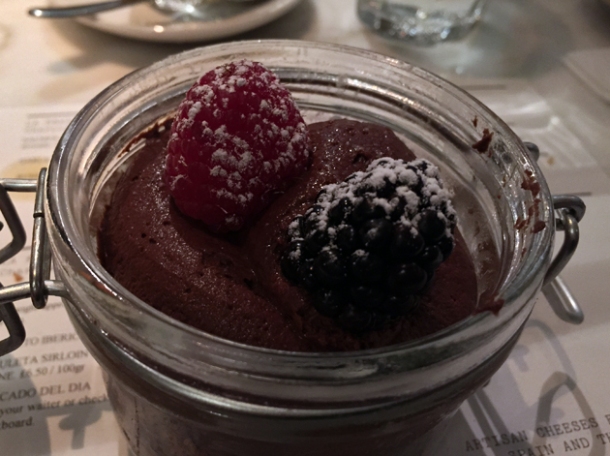 Presented in a clip top jar. Which, thankfully, you don’t have to open yourself.

The plate of anchovies was rather small, even for a tapas dish, consisting of just two modestly sized fillets. They were still pleasingly salty and tangy, if not quite as superlative as those sometimes available at Terroirs.

The iffy lighting made some of the food appear more greasy than it actually was.

Although quite thin, the monkfish and potato stew had a mild bisque-like quality to it. In a pleasant surprise, the chunks of potato were outnumbered by scallops, prawns and pieces of monkfish. What points the kitchen gained by avoiding the temptation to bulk out the dish with cheap starchy filler, they lost due to the muted flavour of the seafood.

The cheesecake was surprisingly eggy, light and wispy, yet still managed to have a bready heft to it. Pleasing.

Help me lose my mind.

Jamon iberico bellota is a crucial staple of any tapas restaurant. Although the quality of the ham is out of the restaurant’s hands, it can choose which supplier of bellota to patronise. The ham here was pleasingly fatty, salty and taut, although it didn’t have the exceptional depth of flavour of the very best jamon iberico bellota.

‘Crispy fried fish’ doesn’t quite do justice to the range of deep fried seafood present in this dish – whole sardines and shrimp, as well as segments of squid. Although the latter was ineffectual and uninteresting, the crispy, zingy and salty sardines and shrimp were delectable. Their small size and the oil-free nature of the crispy batter made eating them whole the only and best way to go.

People get squeamish at the slightest of things.

The only thing that sounds less exotic than sausage and potatoes would be a buffet for elderly diabetics in Wolverhampton.  The thin slices of potato were nothing to write home about, while the coarse and lightly smoky kofte-esque sausage was only somewhat more interesting.

Few cuts of pork are as delectable as secreto iberico. The slabs of secreto here were dense and moist, but also unevenly cooked with some parts notably rarer than others. The meat was therefore heavily dependent on its salty seasoning for flavour. Disappointing, given the superlative secreto iberico often available elsewhere. 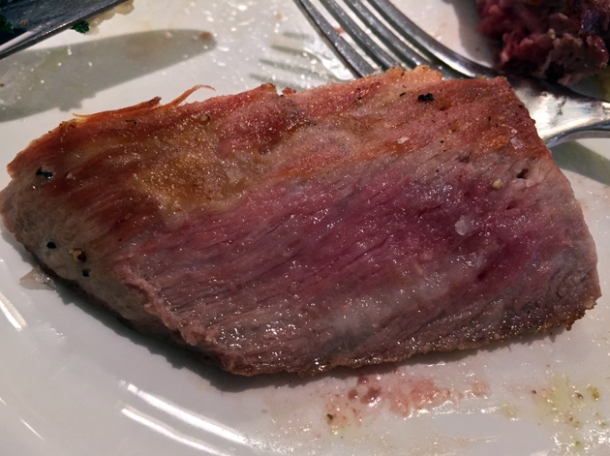 Although Morada’s lamb chops aren’t as sublime as those available at Blacklock, they’re still pretty good. Cooked medium rare, they were moist and surprisingly delicate. Although lacking in earthy depth of flavour, the classy addition of garlicky chickpeas and spinach made up for this.

Medium rare. As they should be.

While it’s possible to eat at Morada by yourself or with business associates, as I did during my first three visits, it’s really an experience best enjoyed with a gaggle of rambunctious miscreant mates such as Socialist Worker, Vicious Alabaster and Templeton Peck. You’ll need three ravenous friends to tackle the suckling pig ribs. This slab of meat isn’t for the squeamish who like their meat neatly packaged and divorced from its bloody reality. A bit of spine is clearly still attached, while glisteningly unctuous drapes of belly fat are present too. Although moist and taut, the pork was heavily dependent on fat for flavour and would therefore have greatly benefited from something to cut through all that richness. There’s a reason American and Korean barbecue often comes paired with sharp pickled vegetables.

The salad of orange, artichokes and raw cod could’ve been an apt pairing for the pork ribs, although it arrived far in advance of the suckling pig. In any case, it’s easily good enough to stand on its own. The firm, springy hunks of fish were dressed in a lightly grassy olive oil. Although the artichokes added little, the zestiness of the orange segments helped counterbalance the relative richness of the olive oil. 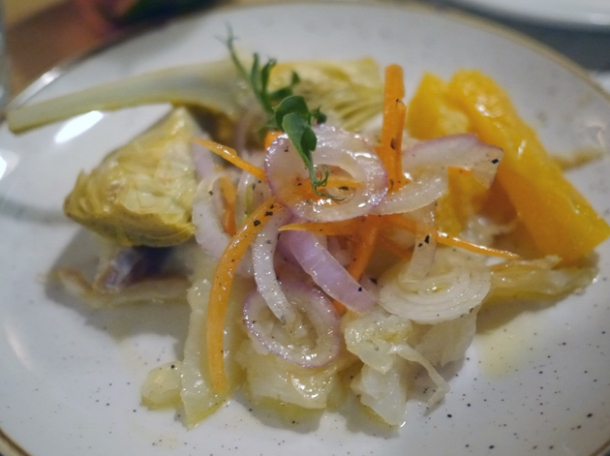 The taut, lightly crispy skin of the leg of lamb reminded me of the somewhat similarly textured skin on Cantonese roast duck. The moist, modestly milky meat underneath was rich in the earthiness missing from the lamb chops.

A stew of both rabbit and chicken is something of a cop out as rabbit, when cooked poorly, can be hard to tell apart from its poultry counterpart. That was sadly the case here as, while both bunny and chook were reasonably firm, they quickly meshed into one indistinguishable mass. This dish wasn’t a complete loss though. Scooping up the taut mushrooms and thin garlicky broth with the thin paratha-esque flat bread was messy, moreish fun.

Okay, so it’s not really like a paratha. It’s just a soft, occasionally crisp flat bread.

I wasn’t a fan of the skewered salmon served on top of halved avocados as they weren’t especially complimentary, but Vicious Alabaster disagreed and thought that the creaminess of fish and fruit meshed together well.

Still better than anything across the road at Bubba Gump.

Much more satisfying were the tender, taut rectangles of salted and lightly garlicky squid. Simple, but accomplished and satisfying. 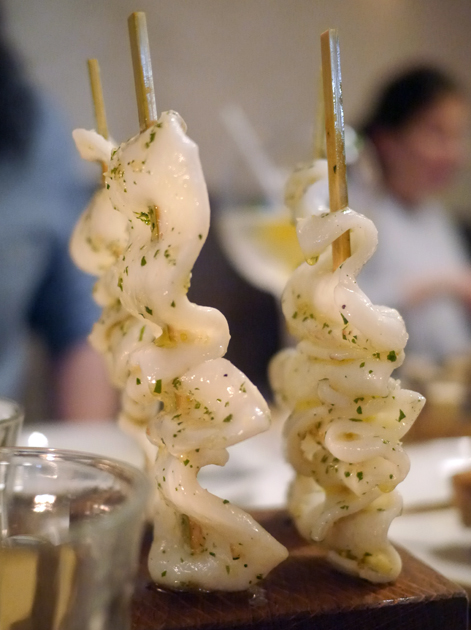 The tender charred chunks of chicken needed a touch more rosemary. The skewered poultry was at its very best when the herb was more heavily laid on and thus at its most fragrant.

The anchovies were much the same as the were before. The jamon iberico bellota had a touch more woodiness compared to last time, but this difference was slight.

Sorry folks, I somehow forgot to take another photo of the anchovies.

While Socialist Worker and Vicious Alabaster both opted for the cheesecake, which was just as pleasing as it was before, Templeton Peck got his dairy fix in another way. His portion of hard sheep’s cheese was lightly earthy and salty, but it was all a little too muted and one dimensional for my liking. When it comes to hard cheese, give me cow – like a slab of mature cheddar or comte any day of the week.

Well, apart from the days when I fancy a slice of something stinky and soft like roquefort or epoisses.

The almond tart was light and fluffy, almost certainly due to a liberal use of caster sugar. The modest almond flavour was very transient though. The dominant flavours instead were the overpowering sweetness of the icing sugar dusted on top and the tang of the blueberries served on the side. This ‘home made’ tarta de santiago should really have been left at home.

Scatty service aside, Morada’s biggest problem is that its food was, for the most part, merely satisfactory. It never quite reached the same dizzying heights displayed in the expertly crafted food at Ember Yard, its nearest comparable rival. Morada really is a second-rate fallback option – a reality that’s all the more disappointing given its illustrious Brindisa heritage.

What to skip: Chicken and rabbit stew; Sausage with potatoes

Reservations: highly recommended in the evenings and on weekends; otherwise not necessary