No-one likes being ill with the cold, but it’s especially inconvenient when you review restaurants. Having a bunged up nose wreaks havoc with your sense of smell, and small plays a big part in how we perceive taste. I therefore usually refrain from reviewing when I’m drowning in my own snot, but Happy Buddha, Porn Master, The Lensman, Templeton Peck and Vicious Alabaster convinced me to make an exception for Apollo Banana Leaf. I was assured that not only would I be able to fully appreciate the food at this small Sri Lankan restaurant, it would also empty my blocked sinuses faster, and with more style, than an explosive fart in a stuffy office on a hot summer’s day.

What’s definitely not stylish is Apollo Banana Leaf’s premises. The somewhat shabby decor feels like it’s been pieced together after multiple drunken visits to house clearances and pound shops. Just as amusing is the reservations process. As this BYOB restaurant is quite small and gets packed out with large beery groups getting very beery with cheap off-licence beer, it pays to book ahead. The barely comprehensible staff were surprisingly laid back though about when we should turn up – ‘Time? Just turn up on night. Is fine.’ 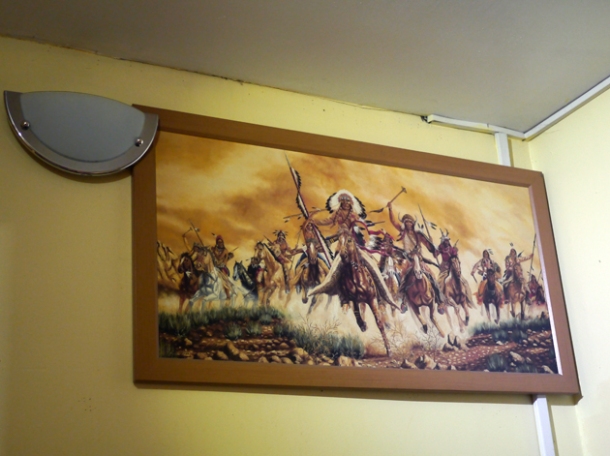 The menu is bulked out by a lot of curry house favourites to appease the beery post-pub crowds more interested in beering it up loudly with more beer, but it pays to steer clear of that chuff and stick to the more authentic Sri Lankan staples. Luckily for us, we had the guidance of Happy Buddha who has the bearing, heritage and wisdom of a Tamil philosopher-king. 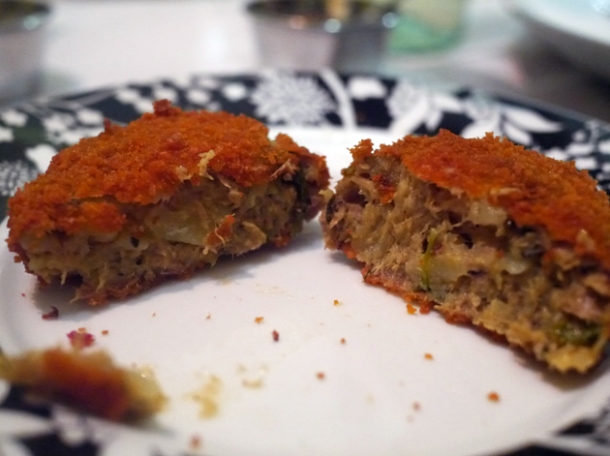 Happy Buddha insists on describing them as ‘like arancini but without the rice’. So that would be a fish cake then.

The mutton rolls were a far more interesting and far more delectable starter. While they had the same crisp, oil-free breadcrumb coating as the fish cakes, inside were dense, chunky strands of moist meat with a lightly fiery heat. 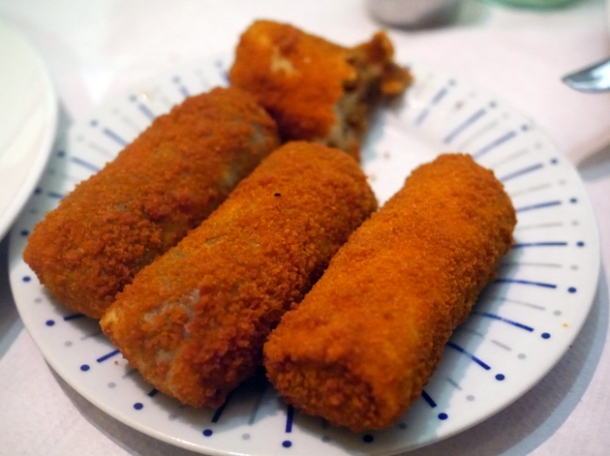 Far better than they look.

Today’s procrastination was brought to you by Röyksopp.

Vicious Alabaster was especially keen to order the thayir vadai. There was little of the promised lentil fritter, but the cool yoghurt and mild drizzling of spices and spicy sauces was reasonably pleasing. 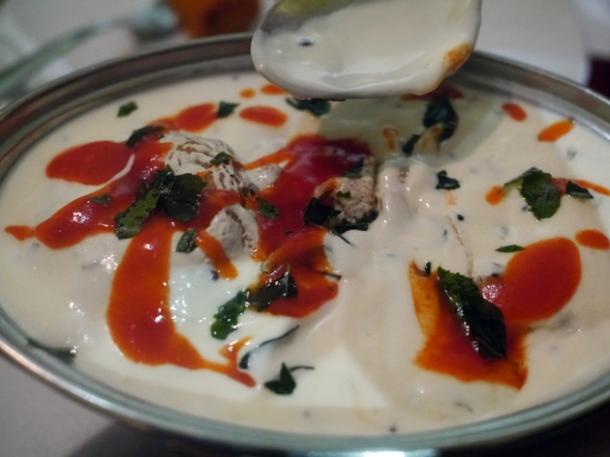 The thin and crisp dosas were pleasingly light and much the same as the ones you’d find in any good Keralan or Goan restaurant. The limp, watery okra sambal served on the side was a disappointment though, leaving it to the other, lightly spiced red-coloured sambal to pick up the slack. 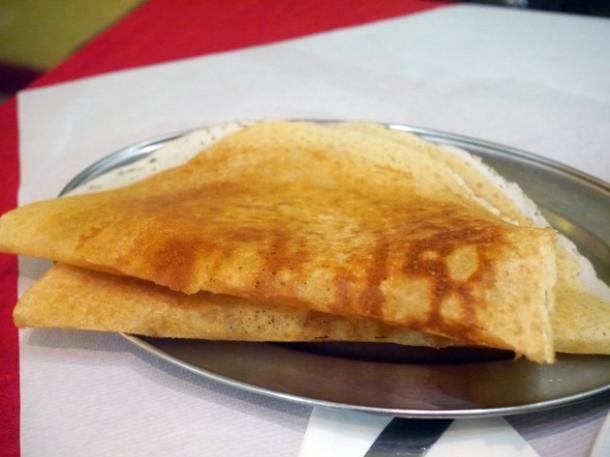 Sambals just out of shot.

Kottu is a dish of shredded roti bread stir fried with a selection of meat and/or vegetables. It’s simple but surprisingly tasty and satisfying. The Vegetable Kottu used a ragbag selection of supple veggies, while the most notable thing about the Special variant was the anonymous but dense and chewy meat that complimented the chewy pieces of roti exceedingly well.

The day is my enemy.

A variety of ‘devilled’ meat dishes are available – all of which are ‘dry’ or served without sauces. Judging from the devilled Special though, they still pack a tingly, prickly heat that starts out mild but quickly grows in piquancy until you start sweating like a farm animal in heat. The meats used in the Special was predominately chicken and mutton, which were both tender and earthy with a slight jerk-like quality to them. There was the occasional smattering of prawns which Happy Buddha and Templeton Peck briefly fought over in the manner of aristocrats at dawn. 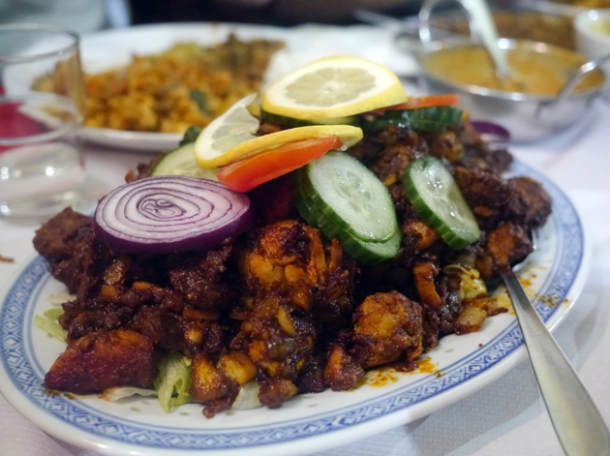 The devilled made me do it.

Apollo Banana Leaf has plenty for vegetarians too – it’s not all about the meat. Although the aubergine in the eggplant curry consisted of little more than fleshy rinds with slithers of skin still attached, the creamy sauce richly flavoured with coconut made up for this meagreness. The dhal curry was no afterthought – fluffy lentils with a bright, citrusy heat. 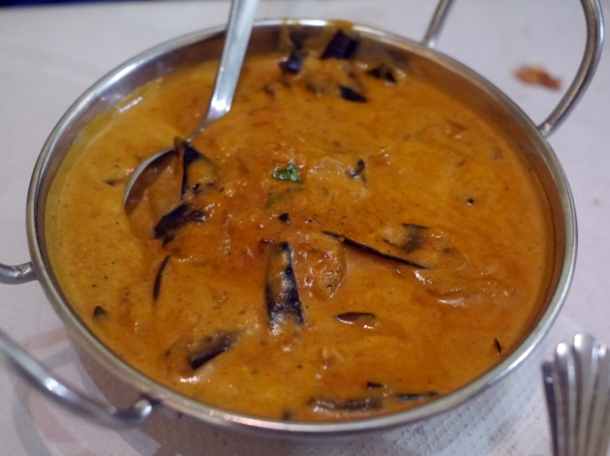 Sins of the flesh.

The string hoppers weren’t what I had been expecting. Rather than the patties crafted out of compressed rice noodles, what we got instead was a fluffy mass akin to cous cous or quinoa mixed together with an assortment of meat and veg. It was still pleasing though, due in large part to its cinnamon-like flavour but with a more rounded nuttiness and spicy heat. 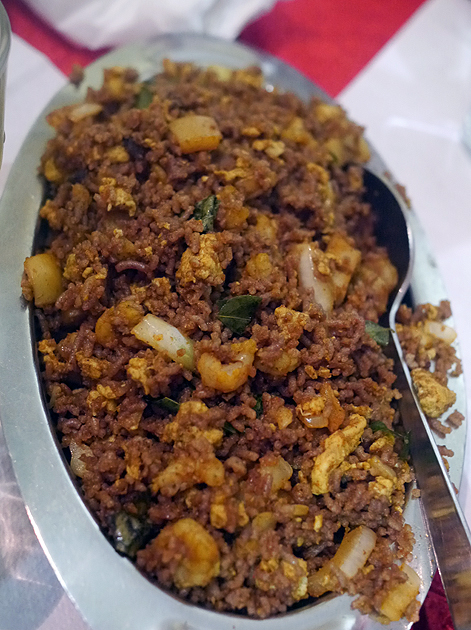 Happy Buddha has a strange fondness for the Sri Lankan cream soda which has an eery green colour to it. It’s as if someone melted down the filling of a thousand custard cream biscuits and then bottled the sickly sweet, lightly creamy, vaguely vanilla-flavoured result.

There’s no doubting that the food at Apollo Banana Leaf is, for the most part, boldly flavoured and heartily satisfying. A large part of its appeal also comes from the unbelievably low prices – our bill amounted to £13 each, excluding tips. But it’s important to remember that this is due in large part to the very cheap ingredients, the BYOB policy, the lack of service charge and the lack of investment in the charmingly ramshackle surroundings. Still, in the right circumstances, none of this really matters. Round up your best mates and treat yourselves. Plus, if you have blocked sinuses, they will be blissfully clear for a few merciful hours.

What to skip: Fish cakes; your usual curry house favourites

Average cost for one person excluding drinks and tips when shared between five: £13 approx.