Upmarket Indian aims for the masses. Sort of.

Selling upmarket Indian food is a tricky business. Given the cheap and cheerful nature of most high street curry houses, convincing most people to pay more than £6 for a main is akin to asking for moon rock in your lemonade. Even if you do convince people to cough up some extra cash, the experience can either be great but pricy, like the Cinnamon Kitchen, pricy and disappointingly inconsistent like Moti Mahal, or moderately pricy and infuriatingly inconsistent like Carom.

The brains behind the Cinnamon Kitchen reckon they’ve cracked it with their new venture, Cinnamon Soho which is, you guessed it, based in Soho. Unlike its more expensive City and Westminster-based siblings, Cinnamon Soho has a less starchy, more casual feel with a buzzy atmosphere, brightly coloured walls, arty prints and not a single white tablecloth in sight. There are roughly 64 covers split over two floors, although if you’re sitting on the ground floor, it’s worth bearing in mind that tables near the door can be subject to a stiff draught. Food comes out a rapid pace, but service on my first visit was somewhat haphazard. By the time of my second visit it was much more efficient if still a little cold.

Another thing that separates Cinnamon Soho from its forebears is its menu. Whereas the Cinnamon Club and Cinnamon Kitchen concentrate on high end, contemporary Indian cuisine, the Soho branch focuses on simpler classics with a British-Indian fusion twist. A selection of small bites is available all day with a broader choice of starters, mains and desserts available at lunch and dinner. I tried out a little bit of everything spread over two visits.

My first to Cinnamon Soho came a few weeks after opening and I had the rare pleasure of lunching with The Griddler, one of my more infrequent dining companions. Both The Griddler and I were big fans of the jazzy scotch eggs at The Draft House, which have sadly now gone downhill, so we had to try the Bangla scotch eggs available here.

The casing surrounding the egg is crisp yet fluffy spice-flecked garam flour, with sausage meat the next layer down. The soft egg has a slightly tart, beetroot-esque taste to it which is emphasised by the slight spiciness of the fruity sauce which is more reminiscent of jam than any savoury sauce. The various elements don’t quite come together, but it’s still one fine scotch egg and unlike any other I’ve had.

Are scotch eggs actually Scottish? These ones probably aren’t.

The small omelette, which has been folded over several times giving it a layered construction, tastes exactly as you’d expect. The only thing setting it apart from other omelettes is a tangy, refreshing coriander sauce. The toasted brioche-like bun on which it rests is studded with sesame seeds, but isn’t especially buttery. A rather ho-hum dish that would probably work better as a breakfast item.

Egg on my face.

We were also dissatisfied with the herring roe on toast. While soft and squidgy, it was quite bland and had also been detextured so, as The Griddler pointed out, if you closed your eyes you could almost have mistaken it for chicken liver. The only saving grace was the thick tomato paste – its tart sweetness added some much needed life to this dish.

Our sampling of the small plates and starters wasn’t an overwhelming success, but our main courses were far better. The most attention-grabbing dish on Cinnamon Soho’s menu is bound to be the rogan josh shepherd’s pie. The crisp crust is made up of soft, buttery, fluffy, slightly sweet mashed potatoes.

The meaty bottom half makes this far better than any shepherd’s pie I’ve had before – tender chunks of stewed lamb with a spicy heat provided by green chillis and a depth of flavour provided by other herbs and spices including bay leaf. It doesn’t have the same deep red colour as a traditional rogan josh, but it’s still tasty. 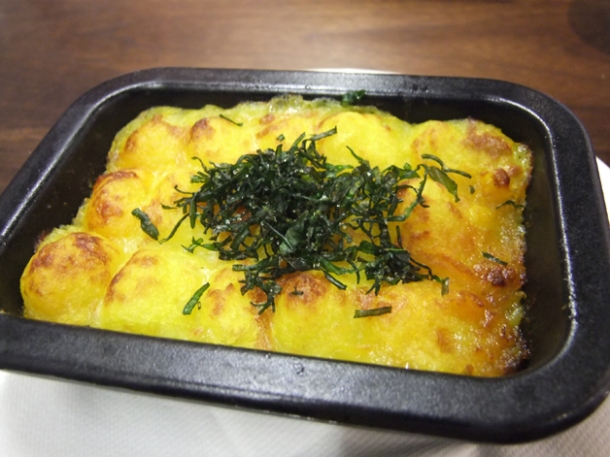 As pleasing as the rogan josh shepherd’s pie is, it pales into comparison to The Griddler’s choice of the Keralan seafood pie. The thin, crisp, soft puff pastry is very light so it doesn’t get in the way of the deliciously moreish filling. The firm chunks of white fish and prawns are accompanied by some chewy squid in a mildly spicy, slightly creamy sauce. The sauce resembles a cross between kedgeree and the sauce found in coronation chicken which doesn’t sound promising, but its gentle, creamy blend goes down very nicely.

No dodgy smells emanate from this fish pie. 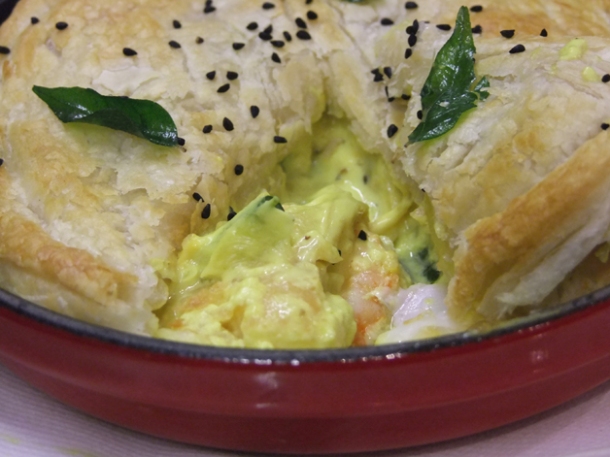 Pie in the sky.

The Griddler wasn’t in the mood for dessert, but I couldn’t resist the intriguing combination of lassi panna cotta served with tamarind-glazed figs. The panna cotta is thicker and denser than usual and, as expected from a version made using yogurt, is tart and a touch sour too. This is no bad thing though and it’s still pleasingly creamy, but the figs aren’t as delicious as I was led to believe from its tantalising menu description. The only way they differ from standard figs is that they’re tinged with a slightly sharp, aniseed/fennel-ish edge but it’s very sublte though. Still, the figs still provide a sweet, syrupy counterpart to the creamy panna cotta.

Although my first visit to Cinnamon Soho was something of a mixed bag, I was still eager to try the rest of the menu which contains plenty of other interesting dishes. On a follow-up solo visit I started off with a curried version of Cullen skink, a Scottish fish soup. Although I’ve never had a traditional Cullen skink, I’m already a firm fan of Cinnamon Soho’s Indianised version. The gently creamy soup is mildly spiced with (what I think are) kaffir leaves and cumin, while the flaky white fish is tinged with an addictive smoky flavour. A bit of stodge is provided by chunks of potatoes and even some pork rind. While this adds a slightly salty edge to the soup, it also makes it unsuitable for pescatarians.

Even better than the curried Cullen skink was the ox cheek vindaloo. Unlike garden variety curry house vindaloos, this curry isn’t blisteringly, mouth torchingly spicy, but is surprisingly fruity instead with a tingly, tangy spiciness that slowly accumulates. The sauce isn’t in anyway oily or uneven in its consistency. It’s a much more civilised way to get a hot, spicy kick out of a curry and it also allows one to appreciate the tender, meaty strands of ox cheek and slices of root vegetables. My only wish is that this elegant but hearty curry came in a slightly bigger portion.

Accompanying the ox cheek vindaloo is a portion of masala mash which is also available as a separate side dish. These fluffy mashed potatoes have a zesty, citrusy hit to them that not only makes them a well-judged accompaniment to the vindaloo, but also surprisingly refreshing for such a hearty dollop of carbohydrates (sorry folks, no photo of this one – it doesn’t look much different from traditional mashed potatoes anyway).

The cinnamon ice cream is distinctly flavoured and comes with four small rolls of carrot halwa. The crisp yet chewy pastry rolls are filled with a slightly sweet filling that only mildly tastes of carrot. It’s a rather underwhelming dessert that’s too subtle for its own good, especially when compared to the bolder flavours of the proceeding dishes.

Just roll with it.

The lassi, available in either sweetened or salted varieties, is a refreshing drink to clear the palate. Unlike lassis at lesser Indian restaurants, where they’ve essentially become excessively thick ersatz milkshakes, the sweetened version here is milky and mildly tart.

Although the two are quite different both in their style of cooking and their atmosphere, it’s hard not to compare Cinnamon Soho with the nearby Carom. Both are similarly priced and have patchy menus with some duff dishes among the good stuff, but Cinnamon Soho is still nonetheless far more enjoyable. When the kitchen gets things right, the simple but effective combinations of British and Indian cooking work deliciously well. Once it improves its service and refines its menu, Cinnamon Soho could well become my favourite modern Indian restaurant. For now, it’s worth visiting if you’re going to be in Soho, but it’s not a must-see. Not yet anyway.

Total cost for one person including soft drinks: £27-34 approx.