With some restaurants, the reasons behind the choice of décor can be inscrutable but that isn’t the case with East Street. East Street is a casual eatery located just off the north edge of Oxford Street and serves up a broad menu of street food from a large number of East Asian countries. The place has therefore been decked out to resemble a street food market, such as the ones you’d find in Bangkok or Hong Kong. It’s certainly different, but it wasn’t convincing enough for Wicket who declared it to be too sterile and polished. ‘It’s just not grubby enough’ was his comical refrain. 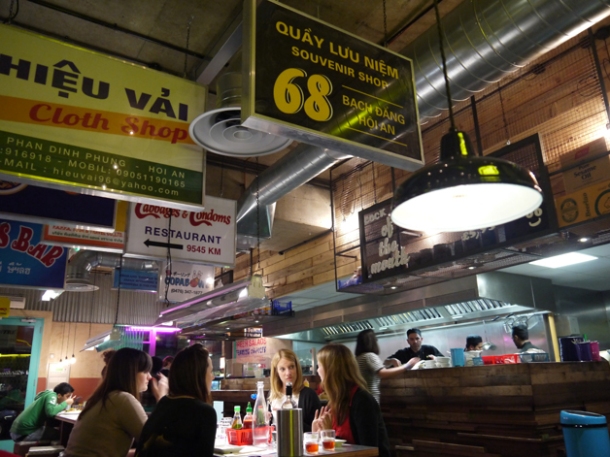 Cabbages and Condoms? Oh, if you insist.

Following my disappointing meals at The Banana Tree and Kin, I wasn’t keen to try out yet another restaurant serving up a rag bag collection of dishes from across Japan, China, and Indochina. However, the need for a filling, inexpensive post-pub feed led to a Friday evening visit with Wicket and Special K. Although the place was bustling, service was still nonetheless efficient.

It’s a if some mysterious force is compelling me to order a Penang curry.

Special K stuck with the classics for her savoury dishes and started off with some minced pork gyoza and appreciated the well-judged balance between the minced pork and bamboo shoot filling. The thin skins weren’t too stodgy and were crisp and golden brown on one side, while supple and smooth on the other. 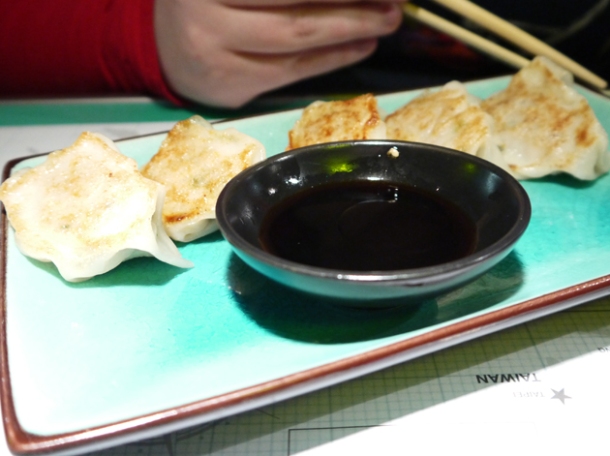 Wicket skipped starters, but I opted for the goi cuon or Vietnamese rice flour rolls filled with prawns, noodles and vegetables. The firm, thin noodle-like skins were filled with zesty carrots and leaves as well as mildly salty, fishy vermicelli but the prawns were too soft and overcooked for my liking.

The kimchee was also a little disappointing. The pickled cabbage was certainly sour, but not spicy in the slightest. 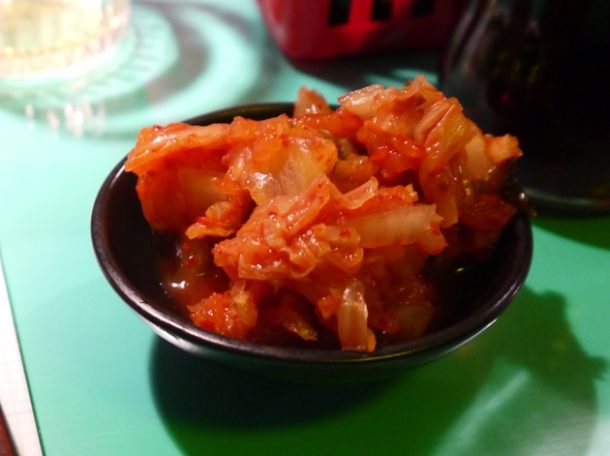 Wicket’s main course of pho xao bao is a Vietnamese stir fried beef noodle dish that bears more than a passing resemblance to beef ho fun. What’s supposed to distinguish pho xao bao from that Cantonese classic is the use of a lemongrass, mint and coriander based dressing/sauce rather than a black bean based one. Sadly, while the thick rice noodles were firm, the rest of the dish was just bland. 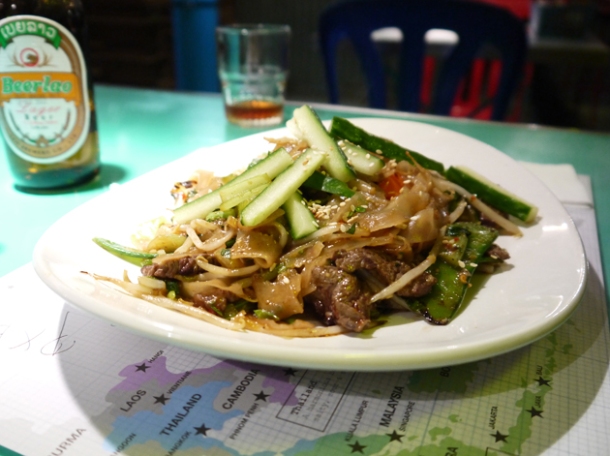 Beer can only improve matters.

I wasn’t impressed with my own main course of beef pho or Vietnamese beef noodle soup. While the murky soup was evocatively fragrant, the taste of star anise was far too strong and blotted out the other ingredients. I had to load it up with extra garnishes of coriander, chilli, fish sauce and beansprouts to bring some semblance of balance to it. While the thick rice noodles were firm, they weren’t accompanied by thin, tender slices of barely seasoned beef brisket as they should have been but by slices of beef that were far too thick, tough and peppery. East Street’s beef pho is one of the most poorly done examples of the dish that I’ve seen in quite some time.

I’m not saying I can do better, but seriously – what is this?

Special K was far more impressed with her pad thai. The firm noodles weren’t too greasy and had a zesty, salty tang to them. She also appreciated the copious amounts of chicken and crushed nuts.

Thai me up, thai me down.

Given the low success rate of our savoury dishes, I wasn’t expected much from our desserts but these turned out to be surprisingly pleasing. Special K’s passion fruit syllabub was a particular highlight. Although it may look like a meringue, it’s actually very fluffy and whispy yet creamy and tart with a distinct taste of passion fruit. The topping of crushed almond biscuits attempt to add some variation in taste and texture, but feel like a last minute addition designed to placate Western palates. 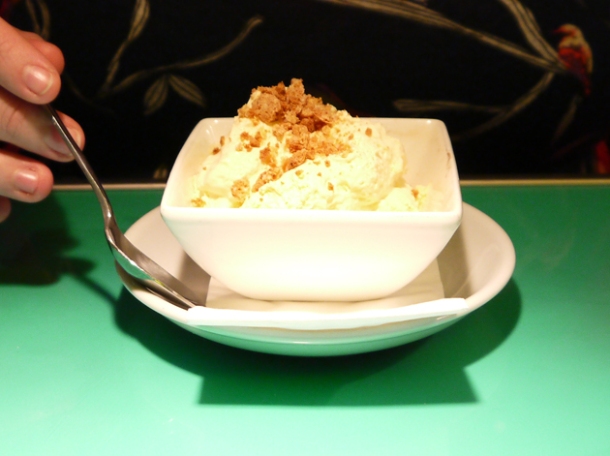 Syllabub is an inherently funny word.

Wicket usually won’t touch any dessert that isn’t sticky toffee pudding, but even that furry little fellow was impressed with his Malaysian dessert of sticky black rice pudding. The sticky, fluffy rice was milky and creamy thanks to the coconut milk while the addition of palm sugar gave the dish a certain sweet nuttiness. 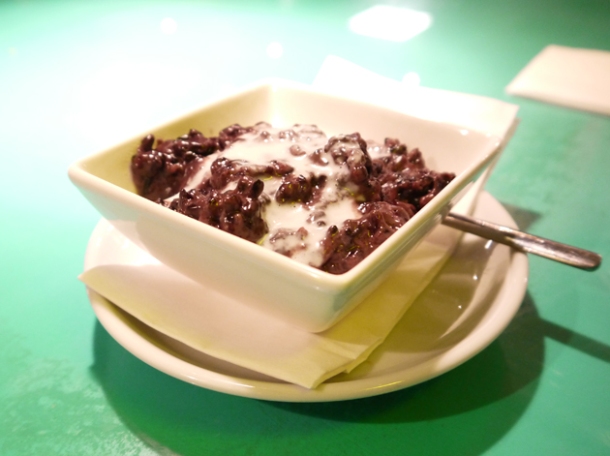 No, it’s not a bowl of cocoa pops.

My own pudding of sticky rice with mango, a Thai classic, wasn’t quite as successful. Although soft and fluffy, the sticky rice wasn’t quite as sweet or fragrant as I had hoped for, but the slices of mango were fresh, delicately sweet and tender with none of the stringiness or cloying sweetness that can blight some varieties of mango. The coconut cream dressing was addictive, but there wasn’t enough of it for my liking.

Stick this in your maw.

Wicket washed his food down with a bottle of Laotian beer, but he was unimpressed with the thin, watery, lifeless brew. 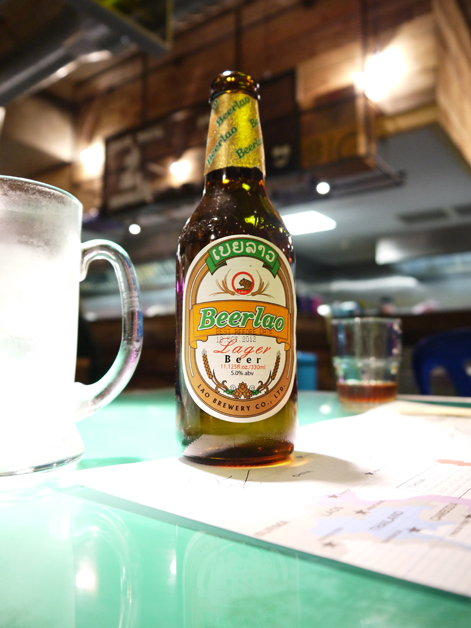 East Street’s drip brewed coffee can’t match the depth of flavour found in Kin’s version of this Vietnamese beverage, but it is reasonably strong and the condensed milk is suitably sweet and viscous.

The best thing that can be said about East Street is that the décor is mildly diverting. While our desserts were surprisingly good and Special K enjoyed her savoury dishes, the rest of our food seemed like pale, bland imitations of their true selves. There may well be other gems tucked away in the menu, but given the dizzying number of dishes you may well have trouble finding them without trying lots of depressingly mediocre and poor ones first.

Trying out dishes from across several different Asian countries in one place may be an appealing idea, but it’s an idea that just doesn’t work in the real world if my experiences at The Banana Tree, Kin and now East Street are anything to go by.

Total cost for one person including soft drinks: £15-23 approx.

One thought on “East Street review – full of Eastern promise or just full of it?”