If you’re the sort of reader who only reads the introduction and conclusion to a review and perhaps skims the photos, then let me save you the trouble right now. If you haven’t already guessed from the headline above, my dinner at Moments in Barcelona is the best meal I’ve had to date. If you want to know more, keep reading. If you don’t, then there are plenty of other Barcelona restaurant reviews for you to peruse. 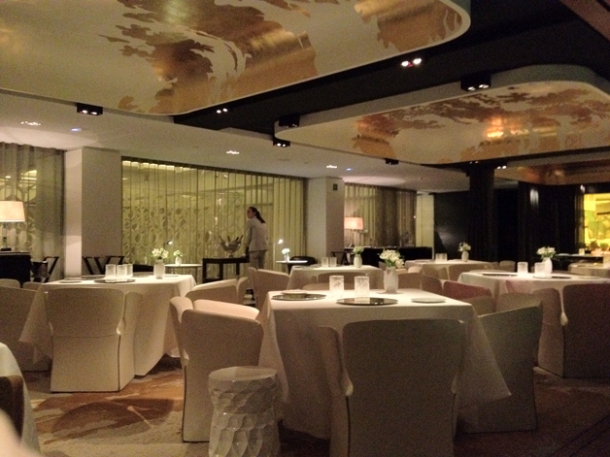 They need to turn the heating down a notch.

Moments is located inside Barcelona’s Mandarin Oriental hotel and has an understated and elegantly gilded decor. A small, but appreciated touch on each table is a small, dramatically lit flower. Service is warm, friendly, efficient and multilingual – at least Portuguese and English are spoken alongside Catalan and Castilian. 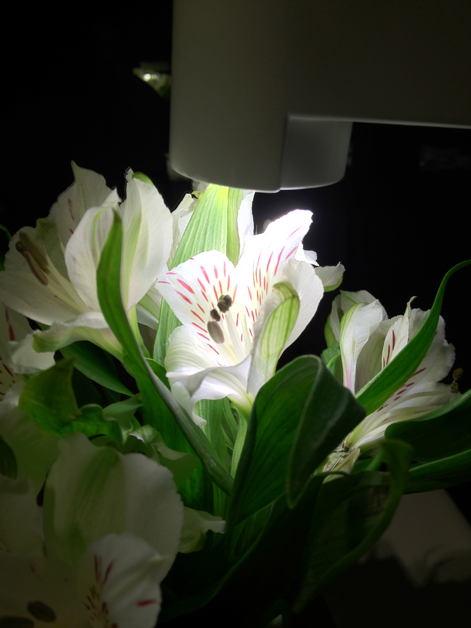 I wasn’t sure what to expect from the kitchen of Carme Ruscalleda and Raül Balam, a mother and son team. While snacking on the non-descript and bland pre-amuse bouche of cheese croquettes, which thankfully were unrepresentative of the rest of the evening, I briefly dallied with the idea of ordering a la carte, but decided to place my faith in the tasting menu and I was glad I did.

Was there a multibuy deal on these down at the supermarket?

Nothing was what it appeared with the amuse bouche which consisted of small bites which appeared to be one thing, but was actually another. What appeared to be a quail egg was actually carrot topped with mimolette cheese and served on brown bread. The sweet, milky and crusty bite didn’t taste much of mimolette, an edam-like French cheese, but it still went down a treat.

The lone scallop was actually a miniature patty of squid flavoured with seaweed and nuts. Firm, juicy, tangy and a little bit salty – it could almost have been a scallop anyway. 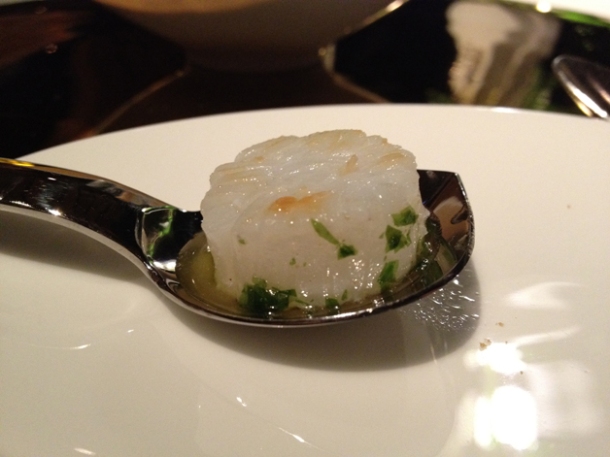 A hilariously small lamb chop no bigger than a Hot Wheels toy car turned out to be a small chunk of battered monkfish topped with spiced apple foam. The monkfish was firm and slightly crisp and its distinct flavour was complimented surprisingly well by the sharp, almost boozy taste of the wispy apple foam (sorry folks, no photo of this one – I wolfed it down too quickly).

A spoonful of cheese and quince turned out to be a small triangle of parsnip served with tomato jelly. If it wasn’t for its distinctly root veg texture, the parsnip could almost have been mistaken for a cheese anyway thanks to its sharp and creamy flavour which was complimented well by the sweet herby hints of the tomato jelly. 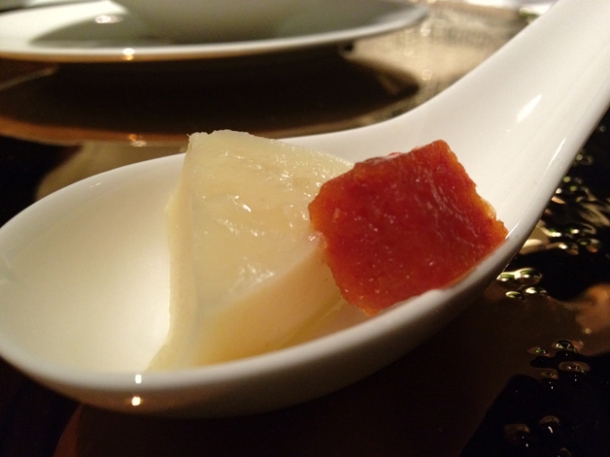 I was initially doubtful about the apparently pretentious presentation of the prawn tartar which had made up to look like a painting by the Catalan artist Josep Riera i Aragó – I should have had more faith as it turned out to be one of the standout dishes of the entire evening. The row of fresh, sweet and addictively moreish raw prawns was wrapped in a roll of gelatine and matched with a trail of tangy, lightly spiced mustard which enhanced the delicate flavour of the prawns rather than overwhelming them. A lip smacking finish was provided in the globule of delicate cherry jelly which somehow managed to be both delicately sweet and stridently sharp. Sheer, utter bliss. 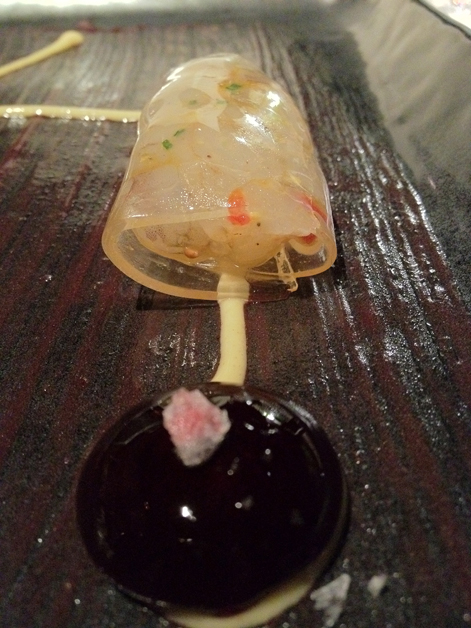 A work of art.

There are few things better in this world than foie gras and the serving here was delicate and fragile, but caressing it into my mouth was well worth the effort. The seared roll of goose liver was decadently creamy in its fattiness and had additional hints of saltiness and pepperiness. The foie gras was in danger of being overwhelmed by the sharp, distinctly flavoured quince purée, so it’s best used as a palate cleanser after the fact but I can overlook this given the sensational quality of the foie gras. 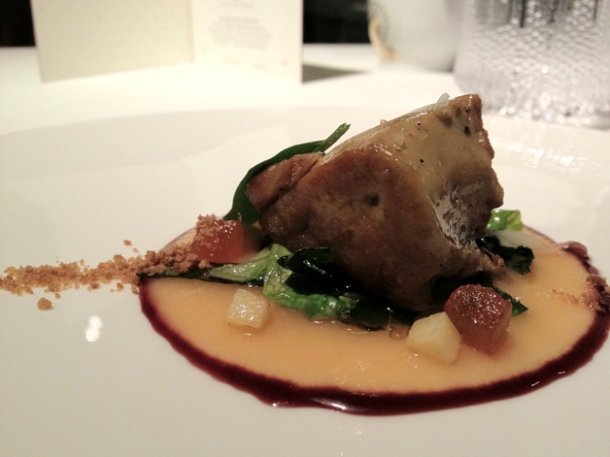 Hold me and never let go.

As much as I loved the foie gras, I was starting to miss the prawn tartar, but the little crustaceans turned up again in a different form. The juicy and delicate prawns were cooked ever so slightly so they were still mostly raw. The gentle sweetness of the prawns was complimented and enhanced by the incredibly tangy, salty moreishness of the wispy egg which was just as delicate as the prawns but had somehow been infused with hints of banana and bacon. A finishing touch were the crunchy prawn legs which had a bold flavour reminiscent of a prawn cracker, but with none of the excessive saltiness or cloying artificial tang of those mass produced snacks. An astonishingly beautiful dish.

Following the incredible prawn and foie gras dishes was going to be hard and while the sea bass was good in its own right, it felt a little anticlimactic following those three delightful creations. The fish was firm and juicy with a perfectly crisp, golden brown skin. The sweet fruitiness of the tomato jus was enhanced by the bitterness of the small head of Romanesco broccoli, but while this pairing was pleasing in its own right it added little to the fish and seemed out of place. 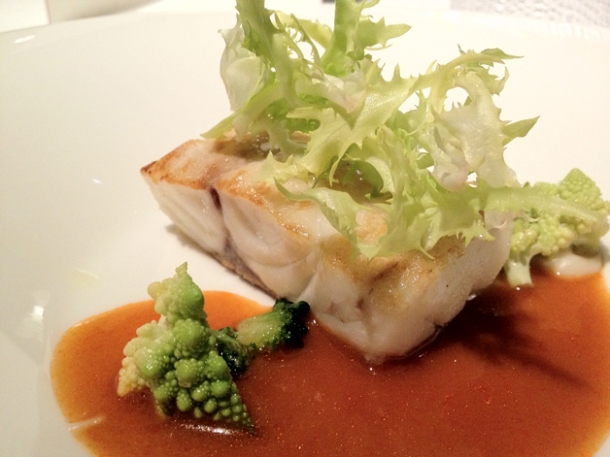 Is there a rule that says every Modern European restaurant has to have a sea bass dish?

The single large meatball had a crisp exterior giving way to a dense, meaty interior. I couldn’t quite identify what meat it was, but the bold heartiness of the jus suggests beef or venison. The three separate vegetable sauces of potato, carrot and zucchini were too subtle for their own good and were drowned out by the jus though (sorry folks, no photo of this one).

Following the excellent main courses was the cheese selection, but this wasn’t simply a few cheeses chucked onto a plate – each cheese was paired with an extra little something designed to compliment or enhance it. Vall de Meranges is a Spanish goat’s cheese and its creamy sweet earthiness was complimented by the incredibly soft and wonderfully citrusy clementine cake.

Ossau Fermier is a rather dry, but sharp and rich goat’s cheese. Complimenting it perfectly was an artichoke confit – its sharp and earthy taste was a perfect fit.

I’ve never had montsec before, so I was caught off guard by the musky richness of this unpasteurised goat’s cheese. The accompanying nut and raisin sponge cake looks odd but tastes exactly as you would expect. It was delicious in its own right, so it was a shame it was overpowered by the very bold flavour of the cheese.

I usually pass over gorgonzola in favour of other blue cheeses, such as stilton or roquefort, but I might have to reconsider this habit. The sharp, fruity, boozy, squidgy cube of pear and porto compote somehow both contrasted with and enhanced the sharp, soft richness of the cheese.

Brie needs no introduction and while it’s just as rich and creamy as one would hope, the accompanying endive leaves sandwiched between wafers of pine nuts not only added little to the cheese but was unimpressively tasteless in its own right.

Pajamas is an odd name of dessert, but even odder is the pineapple jelly that accompanies this dish. Initially a liquid in a jug, when poured onto the plate it almost instantly and magically solidifies into a jelly. It unsurprisingly enhances the taste of the pineapple cake which is itself a good pairing with the milky, sweet richness of the caramel bar upon which it sits. The refreshing ice cream has hints of both coconut and creme fraiche, but with a surprising aftertaste of pepper. This is cleansed away by the unmistakable taste of peach present in the form of a delicate globule. This dessert really needs to be eaten from left to right to appreciate the stunning quality of each of its component parts that come together to form a wonderful parade of flavours and textures.

Let me just slip in to my pajamas.

The second dessert had an equally odd name of Origins and while it wasn’t quite as showstopping as the Pajamas, it was still very accomplished and delightful in its own right. The rich dark chocolate ice cream was great, but couldn’t quite hold a candle to the corn ice cream which was unmistakably and boldly corn flavoured. It’s quite odd having the flavour of corn in ice cream, but the cold temperature really brings out the nutty taste and is enhanced even further when combined with the caramelised peanuts. Pulling everything together was the pool of yucca cream which had a creamy custard-like taste similar to soursop (or custard apples as they’re sometimes known). 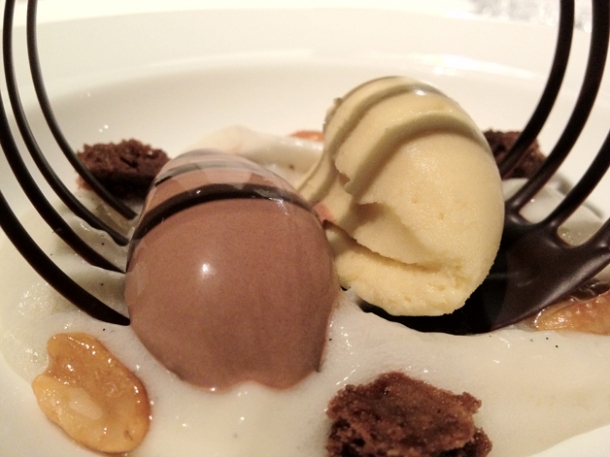 My belly was starting to groan under the weight of all the delicious food, but I still had to find room for the petit fours. At this point, I wouldn’t have been surprised if the kitchen had decided that their work was done and that it was safe to tread water when it came to the petit fours. Thankfully, that wasn’t the case.

British readers will no doubt be familiar with Bounty coconut chocolate bars and its ice cream spinoff – something that I wasn’t expecting to find recreated here on a stick!

A Bounty ice cream by any other name...

Honey was perhaps one of humanity’s first sweet foodstuffs and here a deliciously but not overpoweringly sweet variety is served inside a crisp, nutty wafer.

The ‘rock’ of crispy chocolate rice and almond bore a striking resemblance to Cocoa Pops cakes, but unlike that juvenile party favour the version here has an unmistakable taste of almonds and a nutty, ganache-like centre. 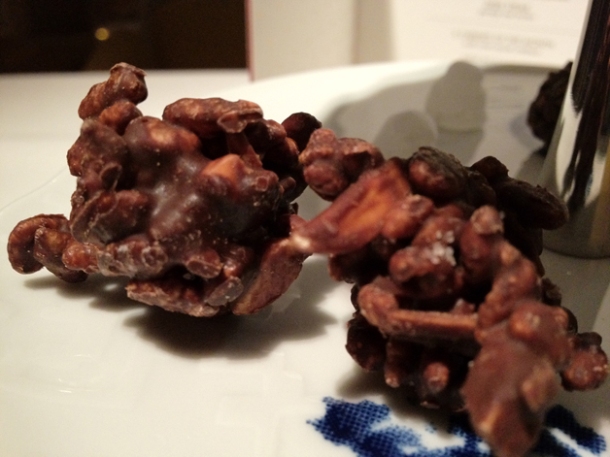 Yuzu is a East Asian citrus fruit and here it’s been distilled into a small sugary cube of jelly. It’s quite sweet and resembles lemon, but without the sharp, sour edge. 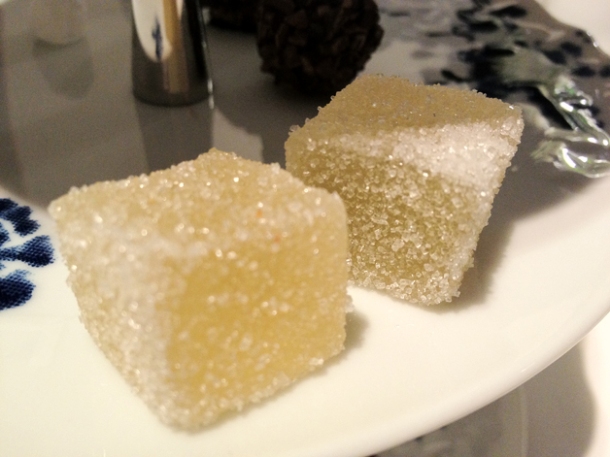 Yuzu is definitely not the same thing as Zazu. That was a character in The Lion King.

Wicket isn’t a fan of pumpkin, but I reckon the furry fellow would change his mind if presented with Moments’ candied pumpkin pastry which is sweet, flaky and nutty, although the buttery richness of the pastry drowns out the scattered topping of pine nuts. 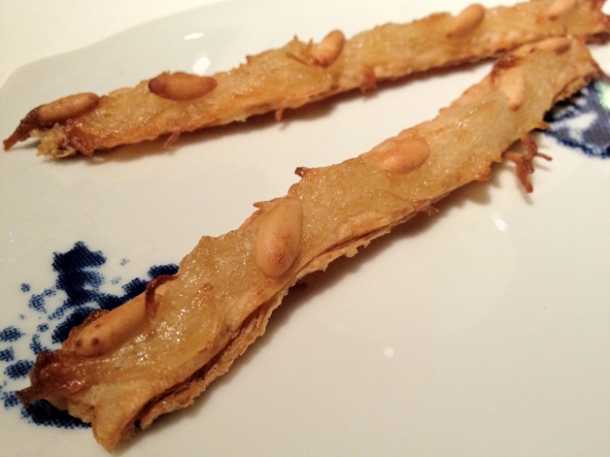 I wasn’t quite sure what to make of the crisp sugary white shells filled with an intensely herby, lemony liqour but it’s nothing if unforgettable.

The final petit fours of the evening was the disappointing runt of the litter. The thin swirls of filo pastry were surprisingly hard and crispy and their buttery taste overpowered the filling of sherbert and liqourice, although I’m not a fan of either anyway.

It’s hard to describe how much I loved my meal at Moments without sounding like I’m in their pocket, but it truly was the most astonishingly delicious meal I have had to date – and I’m not easy to please. For one brief moment, as I sat in the warm gilded dining room and caressed my gurgling belly, I considered regrading all the other five-star fine dining restaurants on this website but decided against it because it would just too much darn work. Of the London haute cuisine restaurants I’ve been to, only Tom Aikens and Gauthier (along with the desserts at Dinner by Heston Blumenthal) come close to matching Moments’ skilful sophistication. It’s not cheap by any measure, but if you’re in Barcelona you owe it to yourself to eat here.

Total cost for one person including mineral water but excluding tip: €133 approx. (£110 approx. at time of writing)

5 thoughts on “Moments review – the best meal of my life. And it wasn’t in London.”