This special events catering company outshines the competition in Tooting

Long before the rise of Hoppers, one of the standard bearers for Sri Lankan food in London were the cheap and cheerful restaurants of Tooting such as Apollo Banana Leaf. So much so, that the very idea of Sri Lankan food in London’s suburbs is almost synonymous with them. Some of their lustre has diminished as more centrally located restaurants, from Hoppers to Paradise Soho, have glommed up all the attention. But it would be a mistake to think that London’s southwestern suburbs have nothing worthwhile to offer – you just have to look slightly further afield.

Worcester Park isn’t far from Tooting (or from New Malden and its notable clutch of Korean restaurants for that matter), but it looks like a far bleaker prospect at first glance. Despite its leafiness, the local eating landscape looks wind-swept and desolate – there’s a shuttered Japanese restaurant, a ribs ‘n’ ice cream joint earnestly pretending it can cater to more than just children’s parties and the usual grease-stained takeaways.

All that means the gleaming sheen of Colombo Kitchen stands out even more. Many London restaurants these days owe their birth to a street food stall, a stage in a haute cuisine gastropalace or perhaps a gap year travelling and cooking in a little-visited part of the world. Colombo Kitchen’s origins couldn’t be more prosaically different. Before opening their doors in Worcester Park, the proprietors honed their craft with Sri L Catering which caters to special events such as weddings, birthdays and howlingly meaningless corporate back-slapping shindigs. 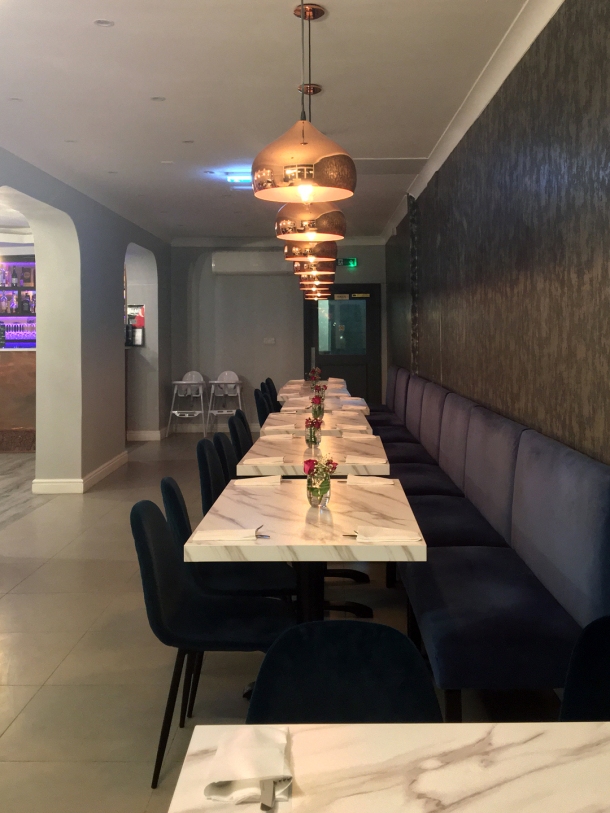 Colombo Kitchen’s menu is relatively short, covering all the usual suspects. The mutton rolls, while not as sumptuous as the version at Paradise Soho, were satisfactorily respectable with a reasonably crisp shell carrying a modestly earthy and meaty filling. While I wasn’t as fond of the vadai as Happy Buddha, my dining companion of Sri Lankan descent, I could see the appeal in the mouthfeel of these savoury doughnuts – dense and firm, then soft and fluffy. They’re best appreciated by dredging them through the sauce on side – the blend of coriander, mint and coconut tingled on the tongue.

The number of middle-aged couples at other tables not talking to each other was… suspicious. 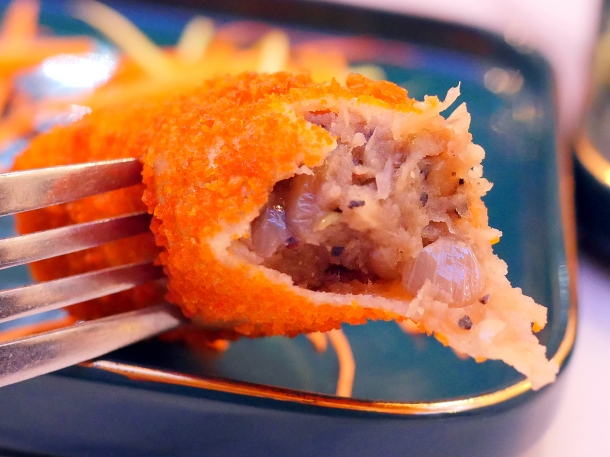 No, a mutton roll isn’t a hairstyle or type of facial hair arrangement.

The most eye-catching things about the hoppers is that they’re made within view of the dining room and come arrayed with a trio of titillating sambols. The most important thing about the hoppers is that they taste goddamn delicious. Crisp then chewy and brimming with a coconut-flecked moreishness, these are easily the best tasting hoppers I’ve had thus far in London.

The yolks gracing the egg hoppers weren’t as rich as I expected, but the rest of this delicate treat was otherwise immense.

The mammoth-sized helping of paneer and aubergine kotthu roti was impressively generous, but its appeal didn’t rest solely on its size. The feathery softness was remarkable and has only been matched, in my experience, by the kotthu roti at Hoppers. This contrasted neatly with the springy softness of the milky paneer. The meagreness of the included aubergine was disappointing, but the cumulative tingly heat of the spicing made up for its absence. 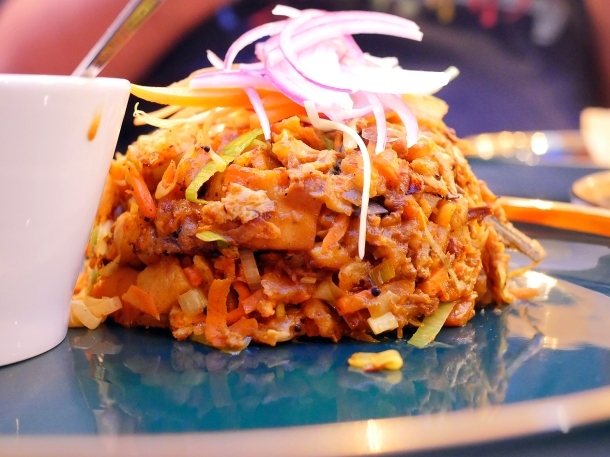 A special of devilled prawns proved to be disappointingly mild, but at least the crustaceans themselves were reasonably firm.

Not a patch on those at Paradise Soho.

The meat curries were, almost without exception, bold pairings of toothsome muscle and sassy sauces. Dense and hearty bits of mutton came in sour yet mellow sauce. Hefty hunks of kingfish-on-the-bone had their occasional oiliness neatly offset by a lightly creamy sauce. Although extracting the flakes of crab meat from the spindly legs was messy work, it was entirely worthwhile to savour their milkiness meshing with the sweetness of the expertly sweated onions coursing through the sauce. A red pork special saw fatty, tender dollops of pig served in sauce brimming with a fiery peppery heat that become ever more potent as we worked our way through it. 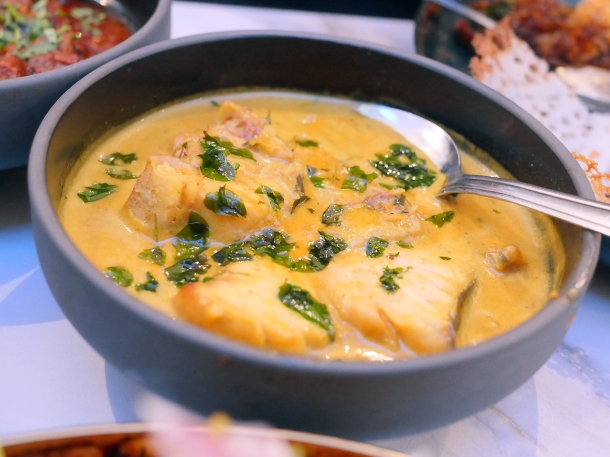 MIA: a finger bowl. Or perhaps some of those handy moist towelettes.

Worth having whenever it appears on the specials board.

The aubergine moju wasn’t what I expecting, a mix of thin aubergine strips with other bright, sharp vegetables served chilled for a refreshing counterpart to the heavier curries. The acharu was similarly bracing. Although this collection of pickles wasn’t quite as sour as Happy Buddha expected, they were still reasonably tart and tangy with the occasional pickled Hungarian wax pepper packing enough sweat-inducing, eye-watering heat to have me crying out for a bovine udder.

Don’t be fickle about pickles.

A special mention has to go to Colombo Kitchen’s soft drinks. Each one was highly distinctive and characterful – no mean feat when the soft drinks at so many restaurants fall into the unmentionably dull categories of fruit-based and/or carbonated. Although Happy Buddha was saddened to discover that the iced coffee wasn’t laced with brandy, this did mean that I could drink it worry-free. It proved to be a milky yet fairly strong brew pepped up with hints of cinnamon and cloves. Falooda had its mild taste of rosewater gently bolstered by rose water jelly, with a dollop of smooth ice cream providing some extra smoothness and milkiness. A thin, refreshing milkshake had malty hints courtesy of Milo followed by a clean aftertaste.

This review’s procrastination was brought to you, in part, by London Grammar.

While the just-set pudding of wattalappam tasted strongly of cardamom, ginger and cinnamon, it wasn’t at all heavy. A dessert hopper was similarly delicate and light. It had the same superlative textures of the savoury versions, but came graced with the musky sweetness of jaggery and the distinctive milkiness of coconut.

Colombo Kitchen’s thrillingly characterful cooking shows that suburban restaurants don’t always have to be humdrum or appeal to the lowest common denominator. Some will complain that Worcester Park is too difficult to get to. Putting aside the fact that it really isn’t, that’s also not really the point. Colombo Kitchen is as much for locals in and around this part of southwest London as it is for everyone else from across the capital. They no longer have to travel into the West End for mouth-popping Sri Lankan food (unless they really want to). A vibrant and skilful restaurant culture spread more evenly across the capital – rather than concentrated in just Soho, Shoreditch and all the other usual places – would do London a world of good.

It’s a shame that the service at Colombo Kitchen was slow and forgetful at first, with staff coagulating behind the bar rather than working the room. It did improve in fits and starts though, giving me some tentative hope that the initially amateurish service was the result of teething issues and not institutional ineptitude. After all, it would be a shame for the chefs at Colombo Kitchen to breathe so much life into this stretch of southwest London only for the waiting staff to extract it all out again.

What to skip: Devilled prawns special

Reservations? essential on and around weekends.

Average cost for one person including soft drinks when shared between two: £40-50 approx. (£70 approx. if you really push the boat out)