By any other name, this London Bridge railway arch treasure would still be as sweet

For a country so beloved by Britain’s middle-class holidaymakers, the food of Portugal has a surprisingly low profile in London. Unless you count the ubiquitous Nando’s (which I don’t), there are surprisingly few Portuguese restaurants in London with most seemingly concentrated in and around the Vauxhall-Kennington area. Perhaps Portuguese restaurants struggle against the perceived similarities of their cuisine with that of their more well-known Iberian neighbour. Perhaps it’s a struggle to sell a cuisine to disinterested Anglo-Saxons, unless it can be simplified into a gaggle of instantly marketable stereotypical dishes.

Whatever the reason, Bar Douro stands out not only for its Portuguese menu but for its location tucked away in a railway arch as part of the Flat Iron Square grouping of restaurants and street food traders. Despite being surrounded by so much competition for hungry mouths, Bar Douro was more than capable of holding its own.

Bar Douro’s most under-appreciated attractions is one almost certainly born out of necessity. Its lunch menu – £9.50 for two courses or £11.50 with dessert – is competitively priced, given that most of the neighbouring street food traders charge around £9 for a main dish. Low pricing isn’t automatically synonymous with good value, but any doubts were soon assuaged by Bar Douro’s kitchen.

The only thing more impressive than the thin yet sturdy, smooth, oil-free and taut skins of the salt cod fritters was the filling. The abundance of meaty, salty cod was smooth and satisfying, time after time.

Part of Bar Douro’s interior is handsomely tiled with azulejos.

Which I naturally failed to photograph.

Gaze upon these salt cod fritters instead.

Butter beans with egg yolk and kale sounds like a cheap and easy-to-make dish, but if you can make as good a version as Bar Douro’s then you can also have my money. Firm, creamy beans melded well with the bittersweet greens and moderately rich bits of yolk, with the whole caboodle bound together even further by an umami brine. 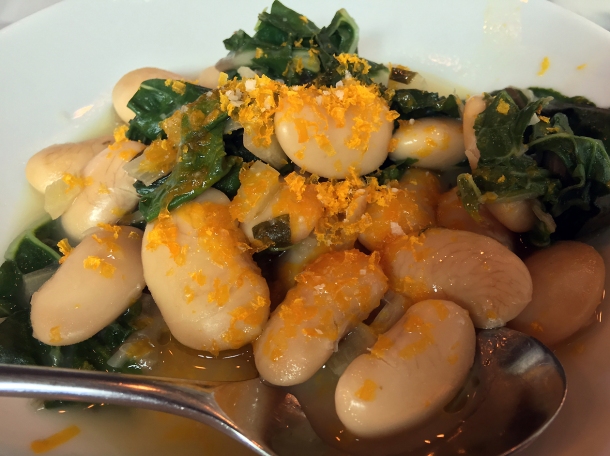 By no means a has bean.

Although cubes of crispy polenta did have indeed a firm and reasonably crisp exterior, they tasted of remarkably little and their mouth-scolding temperature screamed out for more resting time. In the end, these disappointing little cubes had to lean on the vegetal sweetness of the salsa.

The disappointment of the crispy polenta was washed away by the soul soothing qualities of the salt cod hash. Crisp sheafs of fried potato came interleaved with a medley of olives and meaty flakes of cod, the saltiness of one transitioning neatly into the other. This generously sized heap of carbs and protein was the comfort food dish that I never knew I needed. 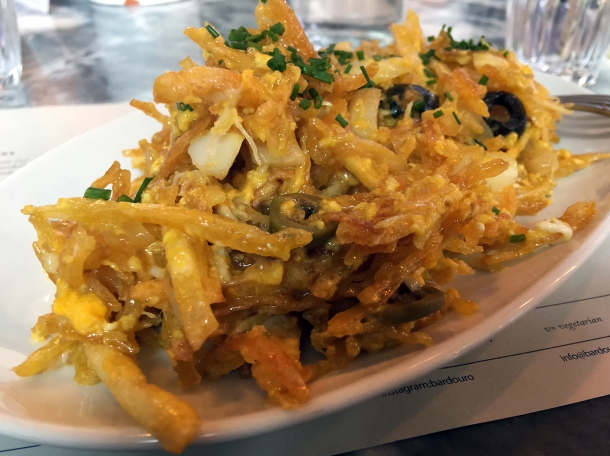 Interestingly, the kitchen uses woks to cook these bad boys.

The choice of sandwich on Bar Douro’s lunch menu changes every and now again. A crisp and fluffy ciabatta-style slab came filled with tender, but rather characterless pork. It was livened up immeasurably by the sprightly heat of chilli sauce and sharp, sweet pineapple. Perhaps a fattier cut of pork could’ve cured what ailed this sandwich. 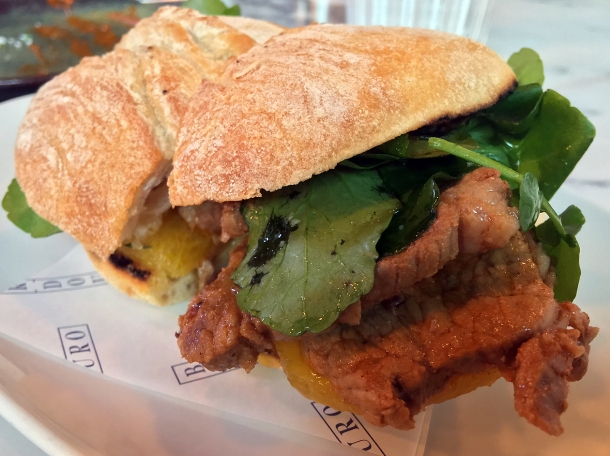 Bar Douro’s nata tart won’t set the world of egg custard pastries alight, but it was a nonetheless respectable rendition of this monastic classic. The golden filling was only modestly rich in its eggy custardness, but it was fluffy while the pastry had a gentle chew to it. 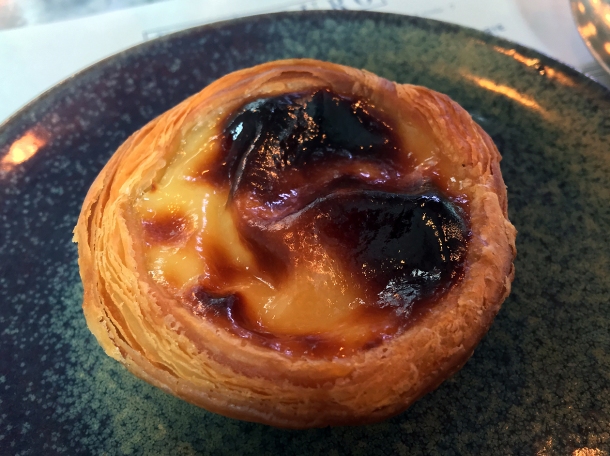 I suspect these pastéis de nata are brought-in given the small size of the kitchens at Bar Douro, but I could be wrong.

Bar Douro’s roasted suckling pig is only available if you order well in advance, but an occasionally available alternative is a sandwich filled with cuts of the squealing beast. While not quite as superlative as the Segovia-style roast suckling pig available at Sabor, it was still richly unctuous with the sweet, succulent swine flesh alternating with crisp, chewy crackling. The ciabatta-style bread stayed out of the way, letting this divine offering hog the limelight. 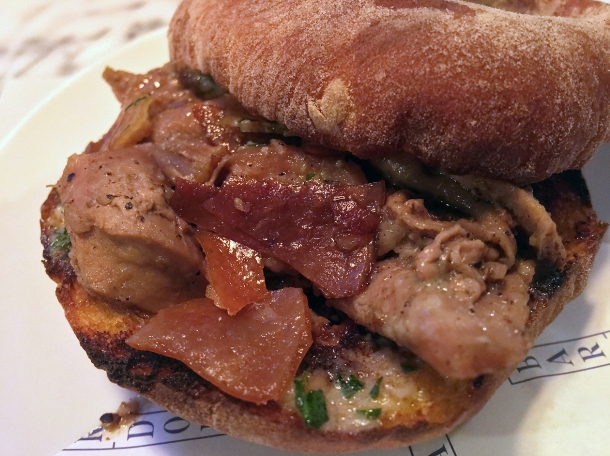 If only this pork sandwich was a regular fixture on the menu.

If you think this photo is a bit too yellow now, you should’ve seen it before I applied colour correction in Photoshop.

Smoked mackerel escabeche had an oddly off-putting bittersweet smokiness that wasn’t anywhere as pleasurable as one would think. The tart sourness of the pickled veg was very much needed as an antidote to the astringent fish. An alternate version that saw the mackerel replaced by small, fleshy mussels was merely inoffensive, indicating that this conceptually flawed version of escabeche is perhaps beyond saving. 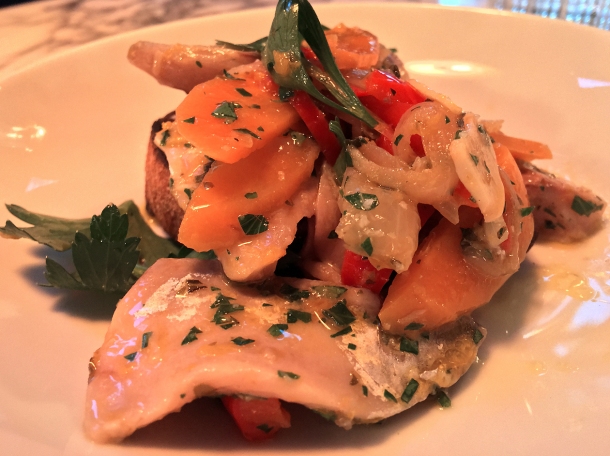 but coming up empty handed.

Bar Douro’s chorizo reminded me of Tyrolean-style speck with its dense, chewy, fatty texture imbued with a bold, unrelenting smokiness. It was almost too rich, making the crunchy bread and pickled cabbage compulsory rather than mere options. 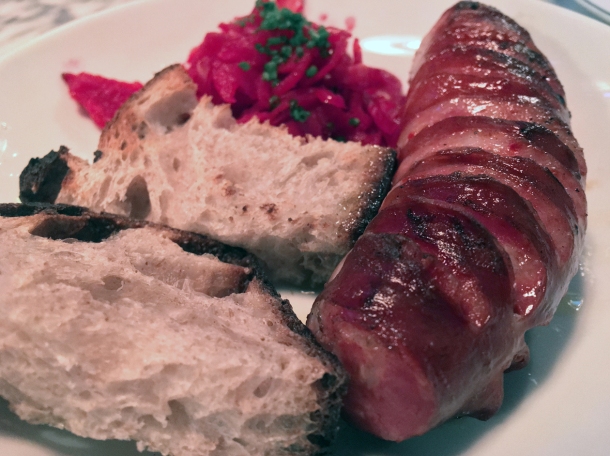 Treats like chorizo are one reason why I could never give up meat entirely.

Meaty, lightly chewy slices of Bisaro ham had a light soy-like umami to them. While they weren’t the most deeply nuanced cured meats I’ve ever had, they were enjoyable enough in their own right. 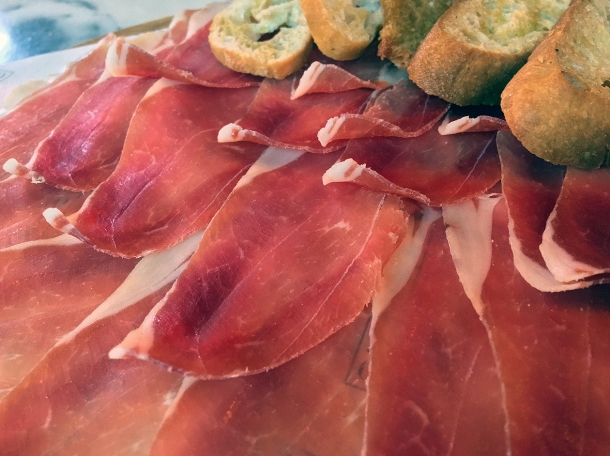 Although the range of fruit on the plate of sliced tomatoes was samey in its narrowness, what was present packed a pleasing umami. It melded reasonably well with the pleasing sourness of the parsley-dotted vinaigrette. 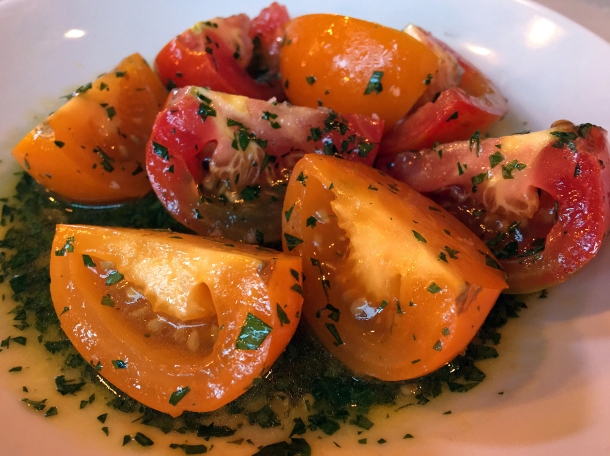 I wasn’t convinced that the earthy sweetness of sweet potato crisps and puree were the best accompaniments for a firm, meaty octopus tentacle. Even so, while this dish didn’t come together in the end, each element was pleasing in their own right. 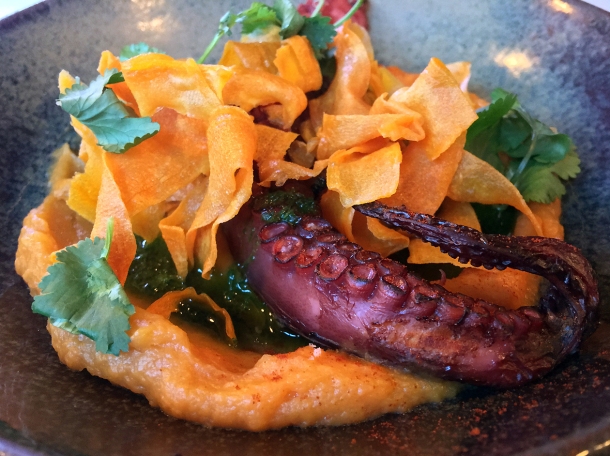 Grilled quail was a treat from start to finish. The crisp, supple skin glided off to reveal smoky, succulent meat, which was itself complimented surprisingly well by sweet, tart pickled onions and crunchy, distinctly flavoured pine nuts.

While the pastry shells of the crab rissoles were crisp and free from grease, the brown crab filling itself was an unconvincing fudge.

While advertised as ‘garlic punched’, the taste of the baby potatoes, crisp skinned and fluffy on the inside, was far more gentle – garlic tickled rather than anything more forceful and strident. The prawns, on the other hand, had not only been punched with garlic, but happy slapped and teabagged with the stuff. The garlic-powered sauce was ultimately the main attraction on that plate, with the modestly firm prawns merely acting as a delivery mechanism for it. 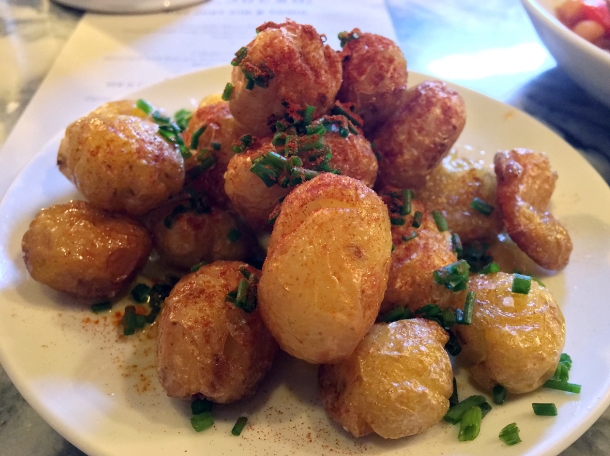 This, on the other hand, was potent enough to please Garlic and Shots-loving fanatics.

Although the chunks of iberico pork lacked the nuanced, subtle flavour that characterises the very best iberico, it was nonetheless mouth pleasing thanks to its firm bite and tender followthrough. The flavour stage was instead dominated by the sticky umami of the sauce, itself fuelled by chickpeas and fatty, smoky chorizo. A tad uneven, but a winner in the end.

Black eyed peas and cabbages are two of the most under-appreciated ingredients of our age, so it’s a shame that Bar Douro’s dish combining the two was such a let-down. Although the sticky sauce was lightly moreish and dotted with tangy onions, the addition of excessively hard and chewy breadcrumbs made eating everything else a laborious chore.

Braised pork cheeks were dense and earthy, almost to the point of resembling goat or perhaps venison. Although the cheeks’ dark and sticky charms were considerable, they would’ve been only half as charming without the lightly creamy, starchy sauce dotted with candied chestnuts that packed a deep nuttiness in every crunchy, chewy mouthful. I’d quite happily devour a bowlful of those little beauties.

Cooked medium rare, the onglet steak was expertly done. The neatly executed Malliard effect gave the crust a deep moreishness, a natural partner for the beefy tang of the quiveringly tender flesh underneath. The confit egg brought surprisingly little to the party, but the fried potato shavings were ample compensation due in large part to their moreish seasoning. The sticky, bittersweet reduction bound cow and potato together beautifully. All steak should be so sensually accomplished – I was left panting for more.

While thin and light, the caramel mousse nevertheless packed a rich caramel sweetness that was bolstered further by the nutty punch of the turrón-like nougat. Almost like ice cream in its coldness, the nougat was refreshing as well as flavoursome.

There’s a mousse-shaped hole in my life.

Egg yolk almond cake was almost the best dessert at Bar Douro. A delicately chewy crust encased a silky soft crumb that was richly egg and tinged with almond flavour. Sadly, this intense pairing of sublime taste and texture wasn’t matched in a second subsequent serving. A simpler, softer crust and muted flavours made for a far more pedestrian version of a previously sublime cake. 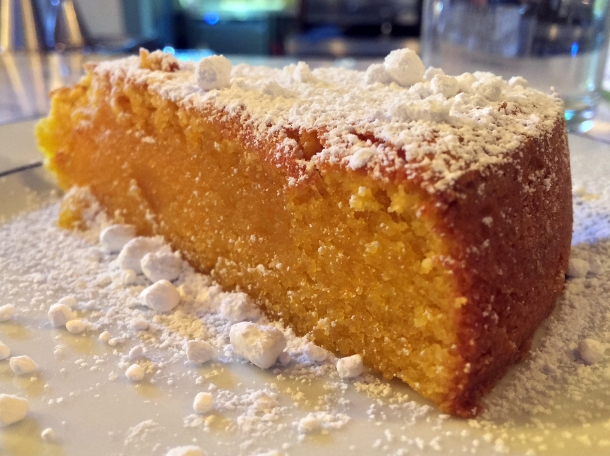 I thought I had found the dessert of my dreams. 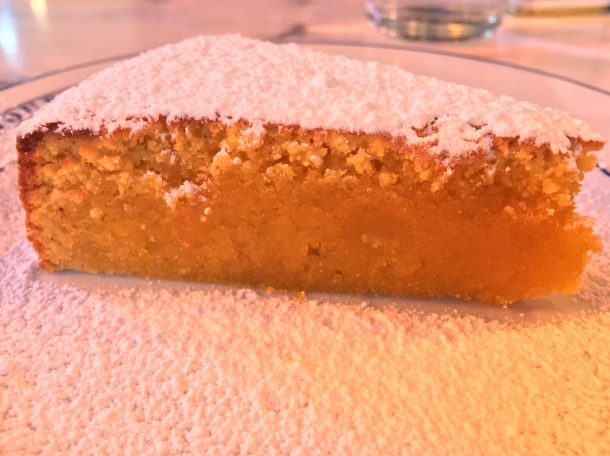 But the yolk was on me.

Bar Douro’s selection of ice creams and sorbets wasn’t the usual selection of vanilla and strawberry childhood chaff, but neither did it scale heady new heights of hyperborean deliciousness. Cinnamon ice cream was smooth and refreshing, but with the spice exerting only a modest presence. Chocolate ice cream not only tasted generic, but was far too crunchy with ice crystals everywhere. The sorbets were more successful. Lip-puckering lemon was refreshingly tangy, while blackcurrant captured the mellow tangy sweetness of the fruit in a smooth granita-like iciness.

Sweet dreams aren’t necessarily made of these.

Not every dish at Bar Douro was a roaring success, but the hits far outweighed the misses. Delights such as the salt cod hash, onglet steak, quail, chorizo and suckling pig are reminders that our neighbours – both in this city and farther afield – have much to offer that can enrich our lives and should not be taken for granted. The next time you’re tempted by a cheeky Nando’s, think about what you’re missing out on and be a little more adventurous, whether it’s at Bar Douro or elsewhere. Life is too short for anything less.

What to skip: Crispy polenta