Curry that makes you feel at home. Sort of.

I’ve never understood the compulsion for restaurants to describe dishes as ‘home made’. When eating out, I want professionally made dishes – culinary delights that I couldn’t make at home. That conceit is slightly different at Calcutta Street though.

Originally a supper club that has now traded living rooms for the homey premises of a former Italian restaurant, Calcutta Street presumably wants you to think of its food as the uniquely delectable products of a motherly bosom previously only available to a select few.

Like most London flats though, Calcutta Street’a menu is small which leaves less room for its flaws to hide. The cramped premises are perfectly comfortable if you’re seated at one of the cushy corner tables or in the semi-private dining basement – less so if you’re placed next to the drinks fridge on what feel like glorified garden furniture. That’s probably not the homey feel the proprietors were aiming for.

The Italian restaurant that used to occupy these premises was a weird, suspicious looking joint. 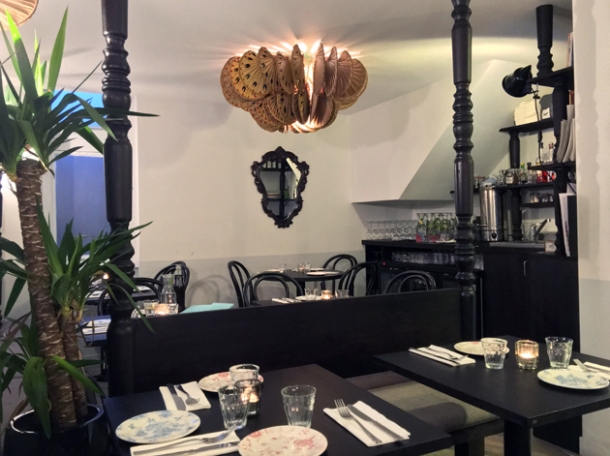 Where can I get that lamp shade? 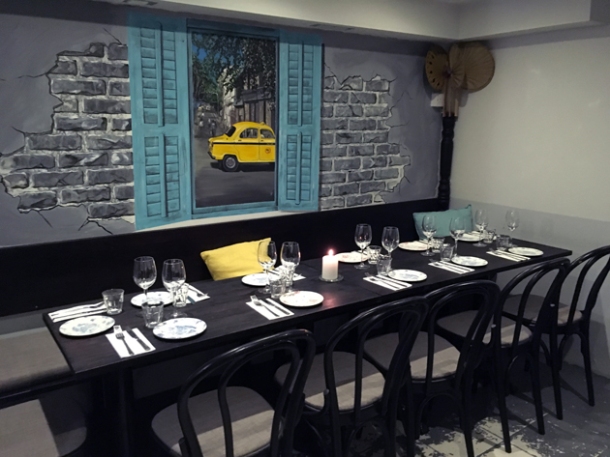 Why is there almost never any one down here?

Phuchka, or crisp semolina puff balls, reminded me of the chickpea-flour shells at Gunpowder but here they were served chilled/at room temperature. Filled with potato chunks and zingy sweet tamarind, they weren’t quite as delectable as their rough counterparts at Gunpowder but still make a fine alternative to poppadoms. 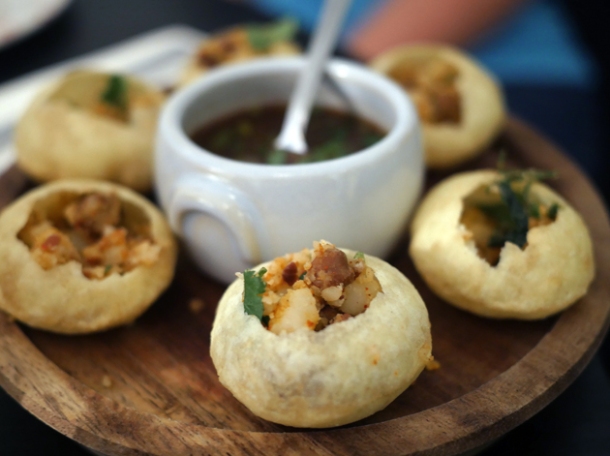 Apologies for the iffy photos, folks.

Although the sliced vegetables at the heart of the battered, deep-fried aubergine were unremarkable, it was an entirely different story for the chickpea-flour batter. Exquisitely crisp then soothingly fluffy, it was neatly complimented by the mild heat of the mustard sauce.

Snaggletooth and I had the whitebait all to ourselves as The Frowner’s pescatarian sensibilities didn’t extend to these little sardine-like fishes. Fleshy and downed in one, the rub of chilli and cumin was disappointingly timid with the recurring mustard sauce left to pick up the slack. 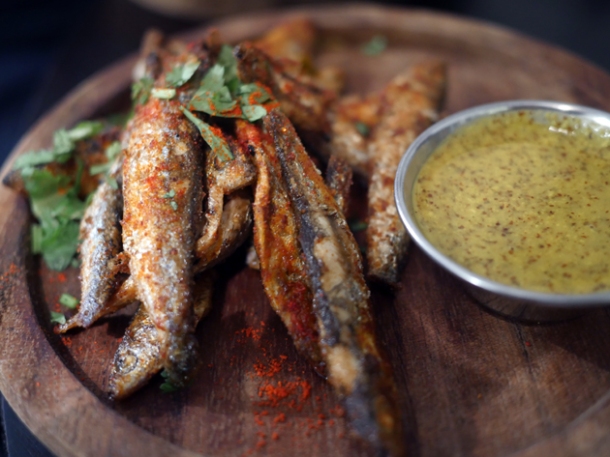 Watching Snaggletooth grapple messily with crab for the first time was a hilarious sight for both myself and The Frowner. The firm bouncy flesh had been expertly cooked, but I was less enamoured with the sauce. Thin yet chunky, it was surprisingly plain with only a mild tomato-ish sharpness and umaminess to its name. 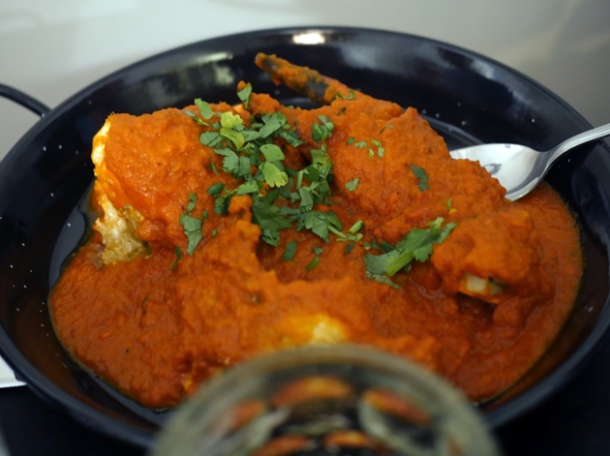 Described as ‘the best crab kari ever’ on the menu. I think not.

The Frowner is notoriously hard to please – especially for a vegetarian/pescatarian. We both enjoyed the firm, squidgy cubes of paneer served in a mild, creamy and nutty sauce. The sauce had a surprise in store though – an occasional burst of fiery heat courtesy of potent little green chillies. I loved it, even if it did make me lust for a lassi. The Frowner merely frowned.

I’m no expert, but should it not be Kolkata Street?

Snaggletooth once again demonstrated his toddler-levels of dexterity when manhandling the tiger prawns. The shells should be easily peelable for just about everyone else though. The firm, bouncy, meaty big-ass crustaceans were neatly complimented by the bright, sharp and flavoursome lemongrass-based sauce. It’s not quite the showcase for lemongrass compared to the brill dish sometimes available at Kiln, but it’s still wonderfully enjoyable in its own right. 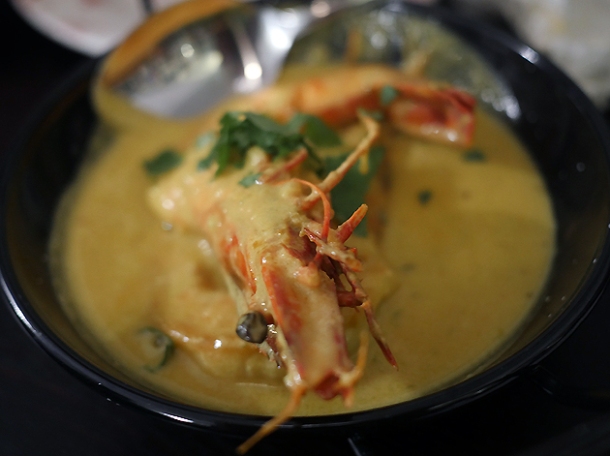 Given the ice age length of time that it took for the sea bass to reach our table, it was something of a disappointment. Steamed in banana leaf, the fillet was surprisingly small which made it difficult to share amongst three hungry diners. The blank slate of a fish was unremarkable in texture and dependent on the mustard sauce for flavour. Even if Snaggletooth didn’t find it a little too overpowering, our excessive familiarity with the sauce was starting to breed boredom if not contempt.

Fried, puffy and airy luchi flatbreads weren’t absorbent enough for mopping up sauce, but were more than enjoyable enough in their own right. Portion size was a bit meagre though, especially if you’re eating as part of a group. 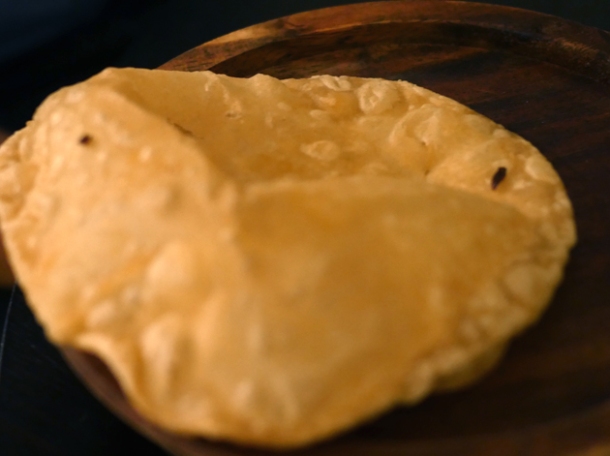 Snaggletooth and The Frowner skipped dessert, which was a real shame for them given the quality of the pithe. Slightly chewy rice flour pancakes, somewhat thicker than a crepe, had a mild coconut flavour to them. The runaway star was the supremely fluffy and sweet jaggery filling – I could’ve eaten a whole bowl of the stuff, tooth decay be damned. 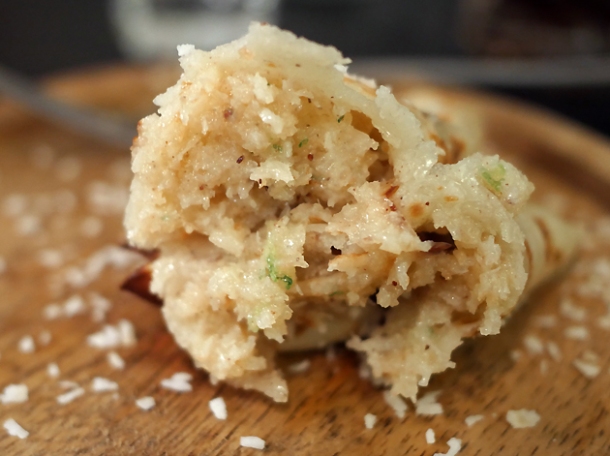 Put your pithe helmets away.

I had mixed feelings about my first meal at Calcutta Street, prompting a second and final meal – this time without the aid of Snaggletooth and The Frowner. The latter, as a pescatarian, wouldn’t have approved of the chicken kebab. It was a very well executed chicken kebab though – cooked just so, the flesh was moist yet tender and yielding. Its mild herby sweetness was easily overwhelmed by the lightly zingy dipping sauce, served on the side, but this shish-style kebab was a success nonetheless. 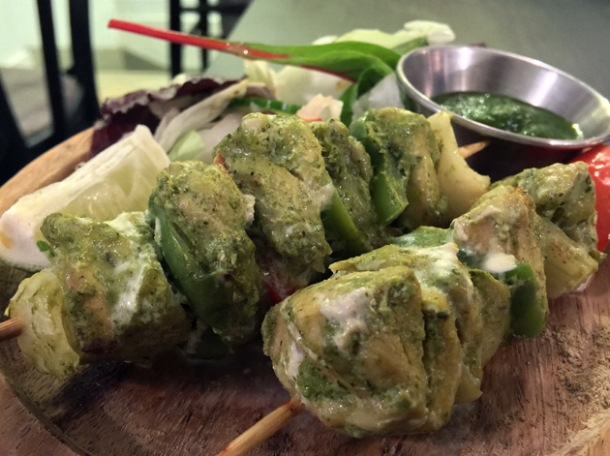 No, you can’t have chips with that.

The meat in a curry is usually the least interesting part of the entire dish, with the focus firmly on the sauce. While the lamb curry here didn’t overturn that formula entirely, it did show that a little care and attention showered on the meat can go a long way. The chunks of lamb were dense and reasonably earthy, but the best bit was easily the small strip closest to the bone. Resplendent with connective issue, it was made even better by the mildly zingy, gently moreish sauce.

I have abnormally strong opinions and feelings about rice, but that also means I inevitably opt for bread with my curries if only because it provides a welcome break from getting my rice knickers in a twist. A fried paratha bread was relatively thick, crisp and malty, but the star had to be the roti. While not as tissue-soft and pliant as the roti at Roti King, it crisp flakiness coursing with the taste of coconut was still a sublime example of the bread-making arts. 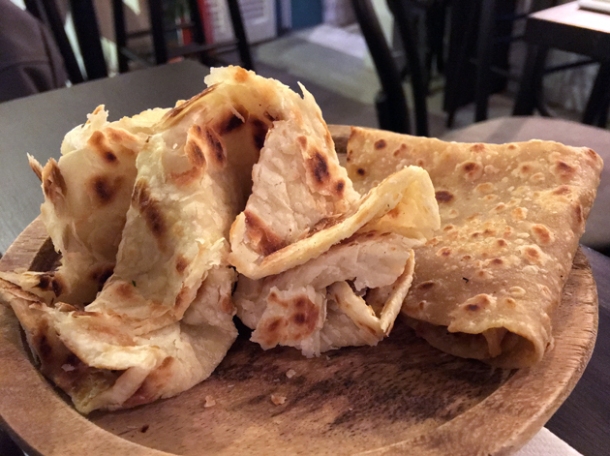 The ruti to my heart.

The lentils in the musurir daal were only intermittently earthy with a gentle mung bean-ish taste, but there was no faulting the bright, sharp and gently zingy yellow sauce. 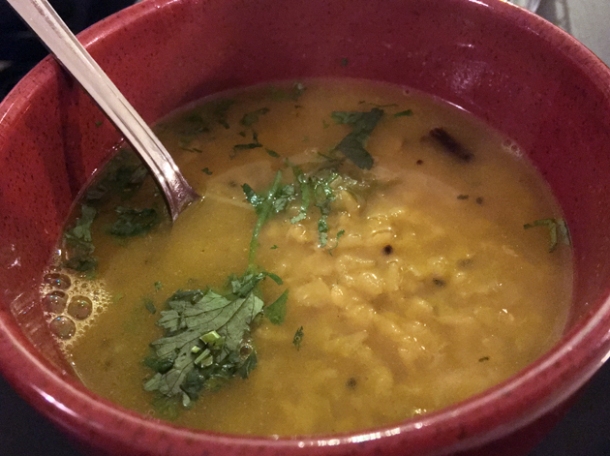 Reasonably thick and fluffy pancakes had the slight medicinal flavour of aniseed which won’t suit everyone, but it’s a taste profile worth savouring every now and again in my book. Sweet, sharp banana slices offset the aniseed-ishness and were themselves complimented by a hint of cardamom. While not quite as viscerally enjoyable as the pithe, it was nonetheless a very accomplished dessert. 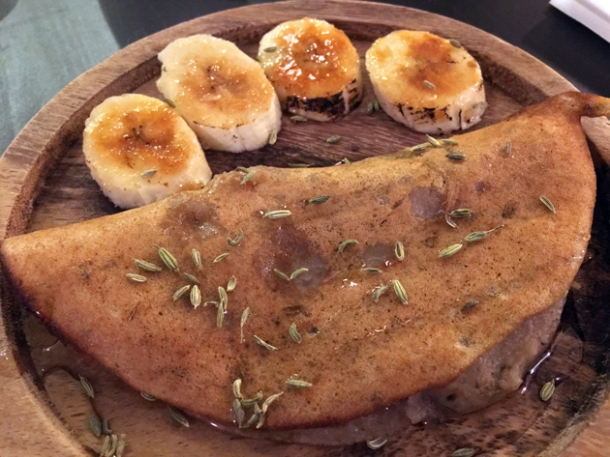 You can call these ‘Indian pancakes’, if that helps you.

Calcutta Street wasn’t an overwhelming success, but there’s more than enough class and finesse bouncing around in the kitchen to make this quirky Indian restaurant worth visiting. The eclectic décor does a reasonable job of evoking Mumbai’s exotic climbes (as long as you’re not sitting at the duff table), while the majority of the dishes on the short menu have unexpected depth and complexity.

The service could use a little more breaking-in though. Whether slow and ponderous or efficient if overly chatty, depending on some indiscernible whim, my servers always had the deer-in-headlights look. Like a Glee character just about to discover their inner confidence through a rousing chorus buster, they clearly need a little push to achieve excellence.

Calcutta Street is a quiet, informal place that’s not for the beer-and-poppadoms crowd or for the Cinnamon Kitchen/Trishna-esque tasting menu aficionado. And that suits me just fine.

What to skip: Seabass

Reservations: only taken for the semi-private group dining room in the basement

Average cost for one person including soft drinks: £35 approx.