Cheap as chips and almost as good

Trying to find a restaurant for a large group of people is a royal pain in the unmentionables. Cramming a baker’s dozen around a table can be a logistical feat akin to the Berlin Airlift, especially when everyone has competing, conflicting demands.

My own unruly posse of dining companions is a case in point. The Jolly Giant wants cheap beer or, failing that, a restaurant that allows you to BYOB. Snoop Dogg, whose personal retail price indices are stuck firmly in the late 90s, wants a meal for less than £20 a head – including booze. The Dark Lord always wants curry and preferably a curry that wouldn’t offend the sensibilities of a Raj-era veranda-loving colonialist. It has to be vegetarian to suit Suburban Sellout, who also doesn’t want to travel too far from the zone 1 railway terminus stations.

All of that brings us to Diwana Bhel Poori, one of a gaggle of vegetarian Indian restaurants on Drummond Street, a stone’s throw away from the architectural and culinary dead zone that is Euston Station. The dining rooms, split over two floors and lined with grungy 70s-era wood paneling, have all the charm of a Pulp Fiction-style gimp dungeon. Depending on waiter roulette, which I experienced across a pair of group meals, the service can be surprisingly chirpy and good-humoured or brusque and unwelcoming to the point of near-silence.

The eponymous bhel poori is a fine starter with crisp vermicelli, puffed rice and fried bread pieces pepped up with a sharp, tart and tangy oniony relish. It’s not quite as multilayered and nuanced as the admittedly more expensive bhel poori at Kricket Soho, but it’s a pleasing example of this classic dish nonetheless.

The light, puffy crisp topping of the sev poori both contrasted with and neatly complimented the creamy and refreshing yoghurty layer underneath. 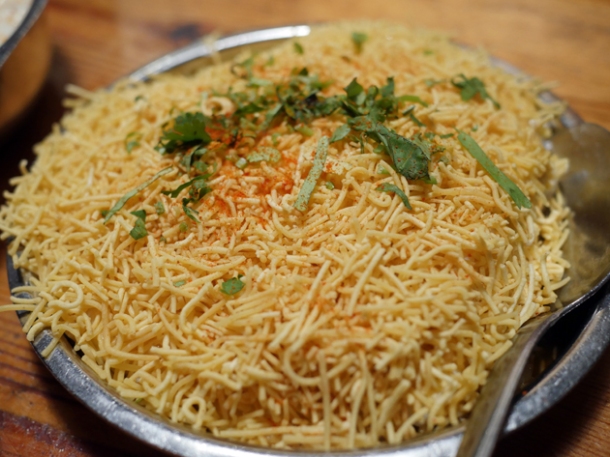 Reasonably nutty black pea fritters came doused in a creamy yoghurt. The side sauces were surprisingly tame which, combined with the textural inoffensiveness, made this a satisfactory if ultimately unmemorable starter. Dahi poori was more successful, with a sharper, tarter and more sour composition. 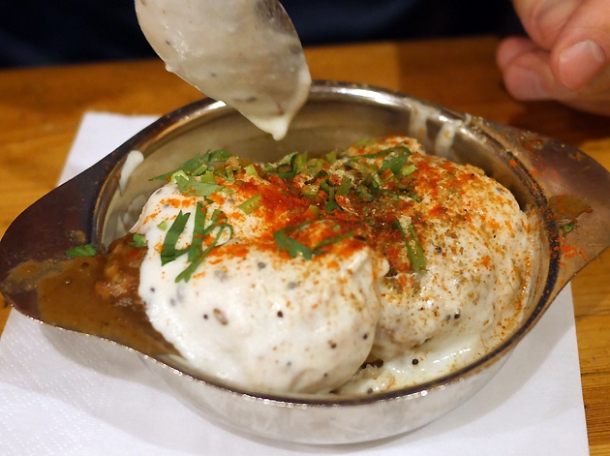 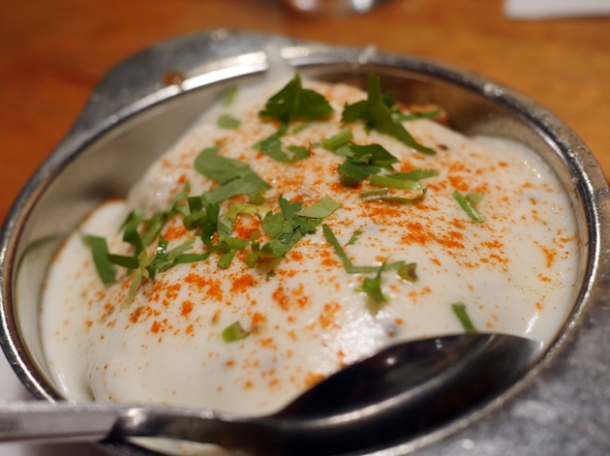 The crispy hollow pastry shells of the puchka were delicate yet firm and crunchy. Although not quite as crispy as the puchka at Calcutta Street, the flavour profile was much broader and more interesting given the spiky tamarind sauce laced with whole chickpeas. 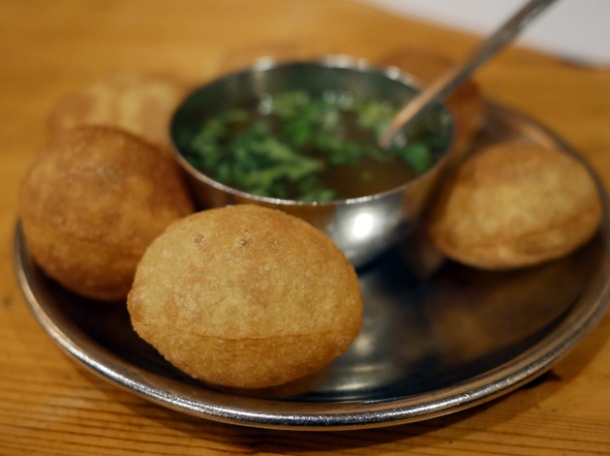 This review’s procrastination was brought to you, in part, by George Ezra. 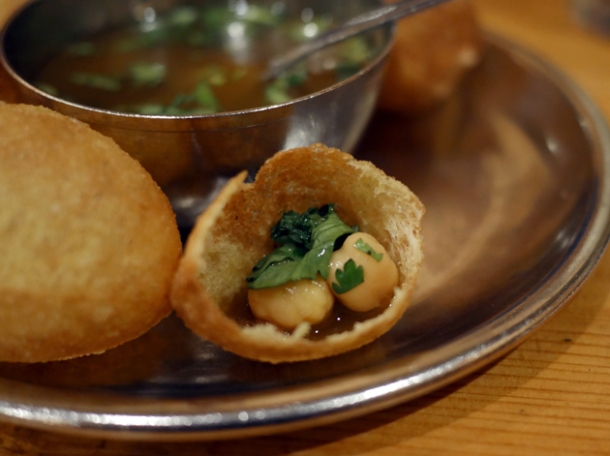 Inexplicably, I keep thinking about my romper suit every time I look at this photo.

Chickpeas turned up again in a creamy, cardamom-infused curry which is only available as a special on Mondays. The accompanying flatbread looked somewhat like Ethiopian/Eritrean injera on the inside, but was very different – thin, yet crispy and hearty with a soft, fluffy interior. A deliciously edible curry scoop, in other words. 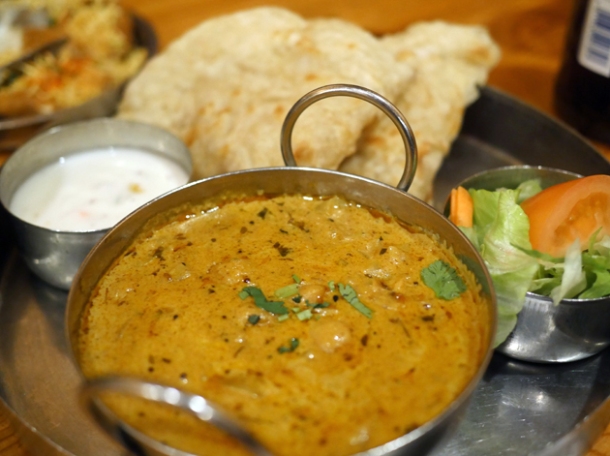 The soft, spongy bread seems to be served only with this dish. Which is odd, if true.

Aloo papri chat was a multilayered joy. Creamy yoghurt, umami and nutty chickpeas, crunchy oaty wafers and tingly, tangy fruit sounds like an unlikely combination. It all came together nicely, though. 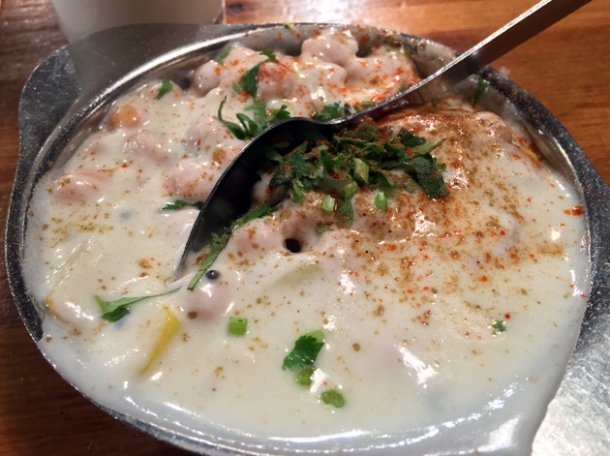 Dishes that are too ugly to be popular on Instagram. Which isn’t necessarily a bad thing.

The Jolly Giant’s amusingly large and conical rava deluxe dosa was surprisingly thick and stodgy, reminscient of some sourdough or injera that had gone off. The thin and mildly spiced sambhar made it much more enjoyable, as did the coarse coconut chutney – even if the latter was a little too dessert-ish in its sweetness.

It was like a rolled-up newspaper, but with thicker paper stock.

Oddly, the pancake used in the sag paneer dosa wasn’t identical, but was instead far better – crisper, lighter and with a fluffy and absorbent inner layer. The filling of intermittently creamy paneer and gently bitter spinach would’ve been a winner if it weren’t for the potato filler mixed into it, although the potato was at least fluffy and light. The tingly, cumulative heat of the spicy root vegetable sambhar on the side made up for this cost cutting, to an extent. 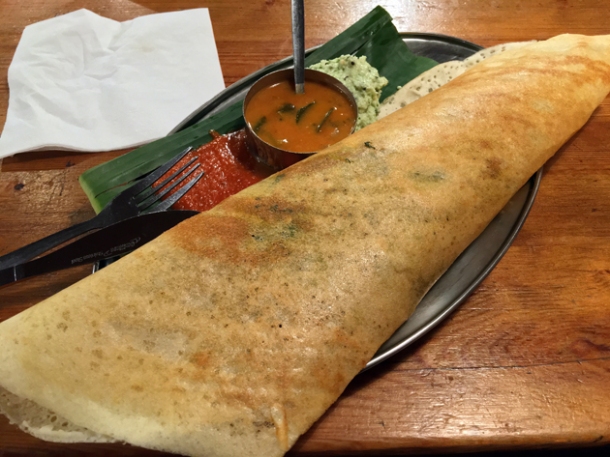 It’s a series of tubes. 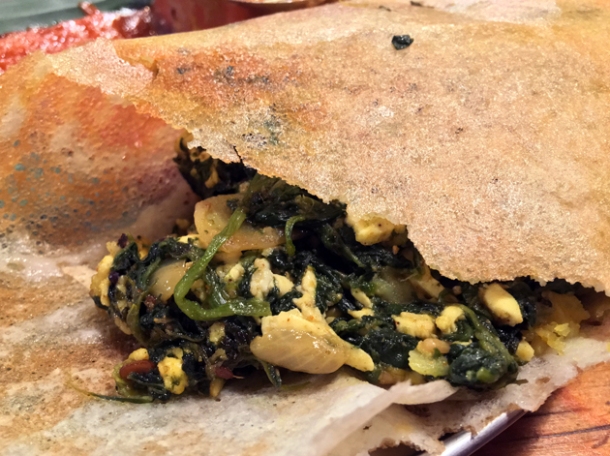 No, it’s not scrambled eggs.

The Dark Lord’s samosas were crisp and oil-free on the outside, while inside was a randomised vegetable filling tinged with maltiness, creaminess and a gentle, layered spice.

Okra fingers were not only tender and sweet, but properly cooked too with none of the gooey stickiness that are signs of a lesser kitchen. The sweet and peppery sauce was too mild and unsubstantive for its own good, but it wasn’t too bad.

Sorry for the iffy photo folks.

Assorted vegetables battered in gram flour and deep fried were free from excess oil. Which is just as well as there was precious little else to remember them by.

Fleshy but surprisingly bland chunks of aubergine were outnumbered by the bell pepper filler. It all came in a thin, mildly spiced and somewhat peppery sauce.

Eggplant on my face.

The pumpkin curry, a special available only on Wednesdays, consisted of reasonably tender and modestly sweet chunks of pumpkin. It was possible to discern their clean aftertaste due to the very modest spicing and rather flat flavour profile of the thin sauce.

Milky lassi was a winner with big hits of cream and the distinct sweetness of jaggery, while the pani poori pani had the unmistakable sweet and sour tang of tamarind.

The cottage cheese composition of the shrikhand dessert was creamy and very smooth with a light sweetness. The portion was titchy though, especially when compared to the generously sized savoury dishes. 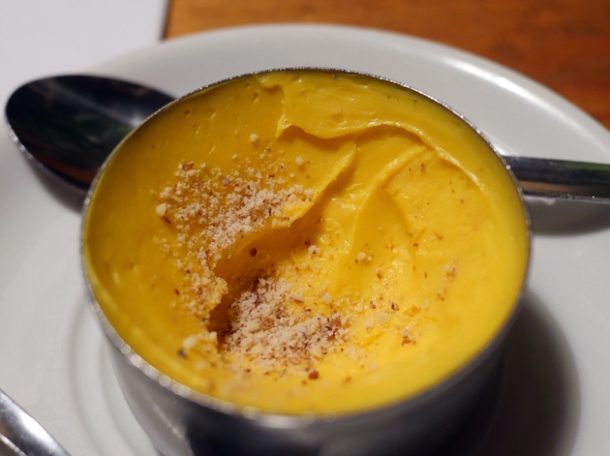 I keep wanting to type ‘Samarkand’.

Rasmalai was somewhat less meagre in size. The cheesy sponge was almost like a curd in its milkiness. A satisfying yet light dessert. 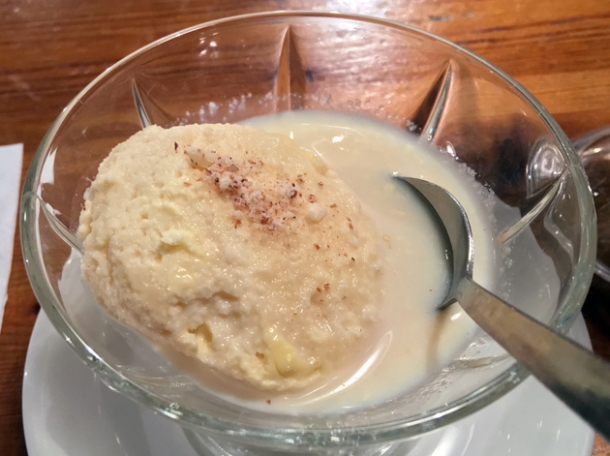 South Asian desserts are thankfully a lot more common in restaurants than they used to be.

The uninspired ice cream bobbing about in the falooda was hardly necessary, while the occasional bits of vermicelli were neither here nor there. Despite the refreshing milkiness and strong taste of rose syrup, this dessert-cum-drink was a bit too sundae-like and could’ve done with a little more finesse.

Or is it ‘Faluda’? Or ‘Faloodah’? I wish there were more standardised English spellings for all these dishes.

Diwana Bhel Poori’s charms lie in its low prices, vegetarian focus and ability to handle reasonably large groups with ease. The low prices not only makes the schizophrenic service easier to digest, but also likely explain the inconsistencies in the quality of the food. From tame sauces to cost-saving filler vegetables, the corner-cutting isn’t hard to spot. To be far, these flaws are easier to overlook when you’re sharing a hearty belly laugh with misbehaving scoundrels like The Jolly Giant and Snoop Dogg. It’s just a shame that you can’t fill that belly with consistently high quality veggie dishes at the same time.

What to order: Any of the pooris or chats; The desserts

What to skip: Nothing we tried was truly bad enough to be worth avoiding entirely

Average cost for one, including soft drinks: £20-25 approx. Adding dessert pushes it a little closer to £30.