Diamond in the rough

My dining companions aren’t just mouths to help me eat more dishes in a single setting than I could manage alone. My most trusted dining companions compliment and challenge my tastes, while the free range ones act as my eyes and ears bringing me news of new and interesting restaurants to try out.

Roti King may not be new, but it is certainly interesting. Brought to my attention by The Jolly Giant, this long-standing Malaysian sits on a small side street near the post-war eye-sore that is Euston station. Some of the signs outside still advertise the previous tenants – Euston Chinese. There are, quite aptly, several bog-standard Cantonese-esque dishes on the menu which you’d only order if you’re severely lacking in imagination.

It’s worth emphasising that if you’re looking for elegant surroundings and graceful service then Roti King isn’t the place for you. The cramped, shabby basement dining room and outdoor toilet feel like relics from another era. The mute service is only proactive when it comes to fetching your bill unbidden – you’ll have to beckon them to clear away old dishes or to order desserts.

All of this is worth putting up with though. The Flame Haired Squelchie and I devoured the roti canai in very short order. Soft, thin and lightly elastic roti were perfect for spooning or mopping up the thin, lightly spicy and coconutty curry sauce served on the side.

Trying not to emote over the roti.

A similar style of curry sauce turned up as a soup in the kari laksa. This noodle soup was very different to the laksas I’ve had before, with the curry-esque soup taking the place of the sour tamarind-based broth that I’m more familiar with. Although mild at first, its cumulative spiciness was enough to make me break out into a small sweat. There was little of the promised chicken, but the chook present was meaty and buttery. Plus there was plenty of fishballs and squidgy, malty tofu. There were even a couple of respectable prawns thrown in. The rather stodgy chop suey-style wheat noodles weren’t a patch on the vermicelli I usually have in laksa, but even with this blight the laksa was still a warming, hearty and flavoursome dish. 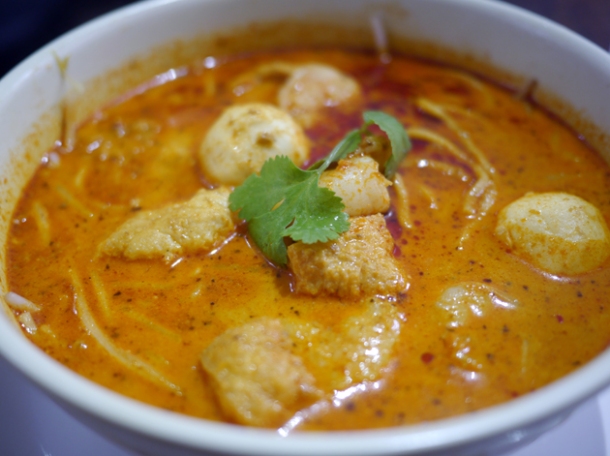 Curry plus noodles will blow some people’s minds.

Previous reviewers have not been kind about the beef rendang. While the tender chunks of stewed meat are indeed only barely identifiable as beef, this doesn’t really matter given the aromatic, boldly nutty and earthy dry rub of (what the Squelchie believes to be) bay leaf, cinnamon and cardamom. The accompanying rice shouldn’t be overlooked – small grained, fluffy, lightly sticky and sweet, it’s a choice carby companion.

It’s worth saving some room for dessert, all of which are sweet versions of roti. The roti kaya, sliced into child-friendly squares, was essentially a lightly crisp, sweet and buttery pancake, but it was a good pancake nonetheless.

But it was the roti planta that blew our socks off. Curled almost like a Danish, the dense yet still light and soft pastry was blessed with a musky sweetness and a light but unmistakable creaminess. It’s hard to believe that all of this apparently came from a filling of coconut jam. It may be simple, but it puts many more expensive and elaborate desserts to shame.

It’s good to be king.

Roti King isn’t a restaurant for all seasons. Its browbeaten service and general air of shabbiness means it’s not for special occasions, while the cramped tables means it’s not a good choice for any sort of large group. Still, its rock bottom prices and punchy food make it a real gem. To paraphrase The Flame Haired Squelchie, you could nothing but eat the roti here and still walk away happy. Throw in everything else and you have a recipe for mucky, happy, glorious fun.

What to order: Roti, roti and more roti; Beef rendang

What to skip: Any of the Cantonese fillers. You’re in a Malaysian restaurant for pete’s sake.

Average cost for one person including soft drinks and service: £15-20 approx.