The Hawksmoor that’s not a Hawksmoor

Foxlow is the latest restaurant from the guys behind the Hawksmoor mini-chain of steakhouses, but it tries to be different by concentrating on meats other than steak. I say ‘tries’ quite deliberately, as you can still order various cuts of steak at Foxlow. Even if this wasn’t the case, Foxlow’s non-Hawksmoor branding is still a little puzzling as the various Hawksmoor restaurants haven’t been afraid to serve dishes other than steak. The short menu is nothing if not straightforward though. The meats are divided up into two sections – smoked and grilled/roasted. If you want sides, salads, starters and desserts, there’s a choice of around half a dozen of each.

I first visited Foxlow with The Euro Hedgie during the soft launch period and, even with this in mind, both the service and the kitchen was already a well-oiled machine – we were in and out in just over one hour and 15 minutes. The Hawksmoors have a special place in my otherwise blackened, shrivelled heart due to their cornflake milkshake – a superlative non-alcoholic drink that’s a real pleasure for a non-pisshead like me. The cold-brewed iced coffee couldn’t live up to the same standard though. Although it was malty in places and had a clean after taste, it also seemed a little watered down.

Put the bunny back in the box.

The salads can also be ordered as sides, although my choice of roast acorn squash was underwhelming. Although soft and light, the usual sweet creaminess was surprisingly muted – a dash of pine nuts added a little crunch for contrast in texture. The squash skins were still attached too, which was unusual. 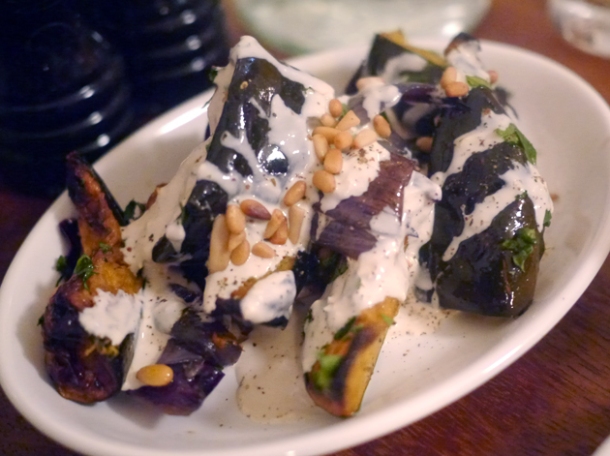 There’s little of note to be said about the tenderstem broccoli, while the roast potatoes were surprisingly light – the soft chunks had a zestiness to them that was unusual but pleasing. 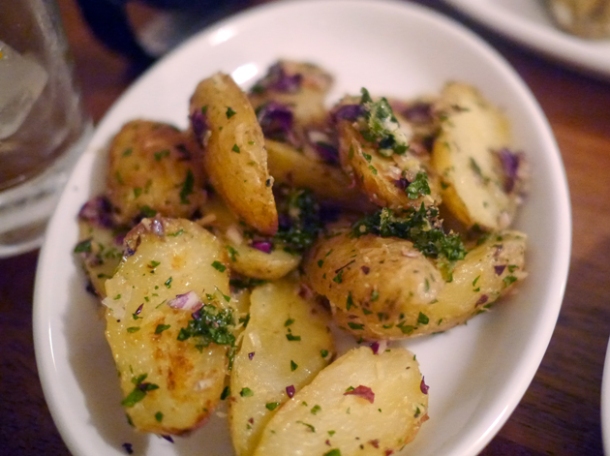 Barbecued baby back ribs from Iberian pigs sounds like a winning formula, but I was sceptical as I’ve always favoured meatier, fattier spare ribs over the comparatively lean and small baby back ribs. The uninteresting rub, with the exception of a mild tanginess, passed me by while the meat itself was tender and lightly smoky. Not bad, but I’ll stick with spare ribs. 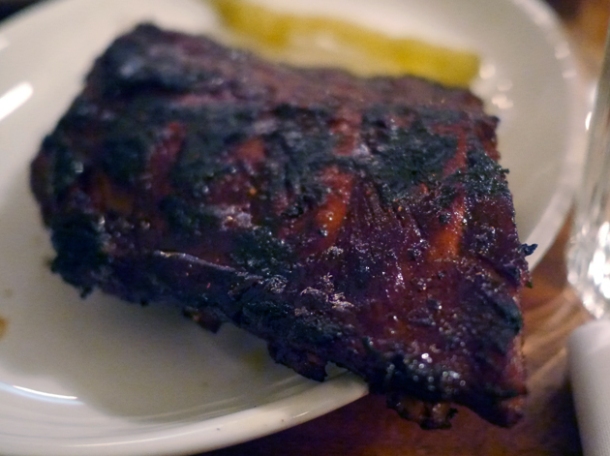 Nobody puts baby in the corner.

The barbecue theme continued with the bacon rib. Although not very smoky, the massive slab of moist, tender and fatty meat was still a delight. A more flavoursome rub would’ve made it even better, but nonetheless it’s still one of the better pork ribs you’ll find in London. 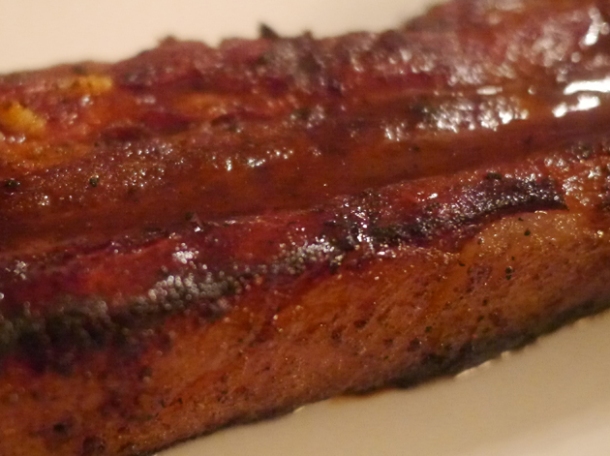 Fat of the land.

The Hedgie opted for the monkfish. He found it a tad overcooked and would’ve preferred it if the fish had been cooked a bit on the rarer side instead, but the light yet meaty fillet was still pleasing enough with its zesty, salty hits.

The Hedgie didn’t stay for dessert, but I had to have the intriguingly named peanutella toast. The treacly peanutella (presumably a nutella spread dervied from peanuts rather than hazelnuts) arrived in a jar dotted with whole peanuts. It wasn’t excessively sweet, nor was it too thick or viscous either. On the side were crisp soldiers with a very sweet taste reminiscent of almonds, although this was lost when the soldiers were slathered with the treacly peanutella. The two sides of the dessert didn’t really work together and I’d much rather have had more of the scrumptious soldiers. 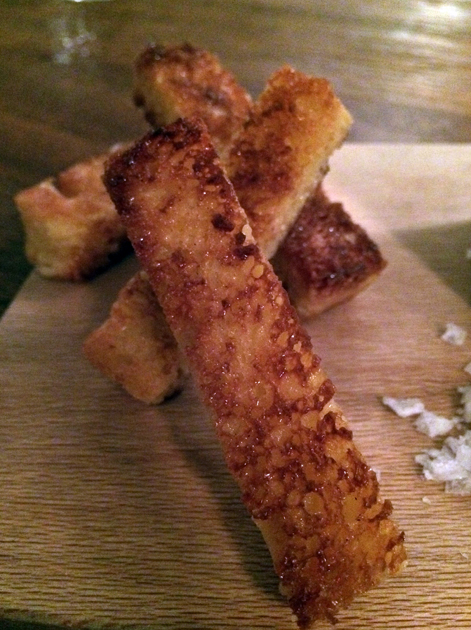 Nutella by any other name is just as sweet?

Since my first visit to Foxlow occurred during the soft launch, it was only fair that I returned when they were formally and fully up and running. The iced tea was a disappointing non-alcoholic tipple – watery and lemonish, I’d swear it was actually a glass of Lipton’s. The cherry soda was better with a very sweet, mildly fruity flavour reminiscent of Calpol, which is a good thing because I like Calpol, with a couple of boozy cherries providing some extra kick. 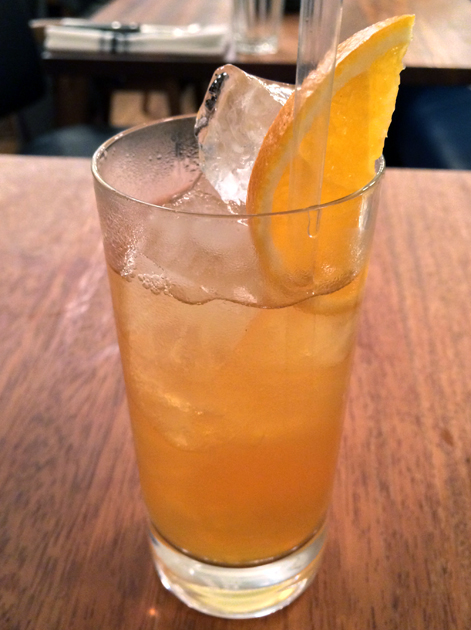 Am I the only person in the world that likes Calpol and Diet Cherry Coke? Not together of course – don’t be a heathen.

A starter of butternut squash and ricotta on toast wasn’t as satisfying as I had hoped. The soft and chewy bread hardly counts as toast, while the fluffy squash and ricotta were both drowned out by sharp onions, a light spicy heat and some fresh, zingy mint. 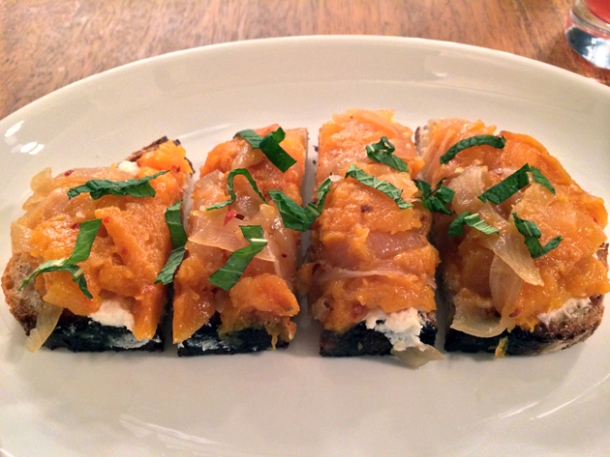 Was the toaster broken?

The side dish of baked beetroot with hazelnuts and horseradish sounds like a stodgy, overwhelming combination, but it was actually surprisingly light and subtle. The large, soft chunks of earthy beetroot were dressed in a surprisingly muted horseradish and a light dusting of fine grained, crushed hazelnuts. A slightly stronger horseradish would’ve complimented the earthiness of the beetroot even better though while a more generous dusting of hazelnuts would’ve emphasised the contrast in texture more. 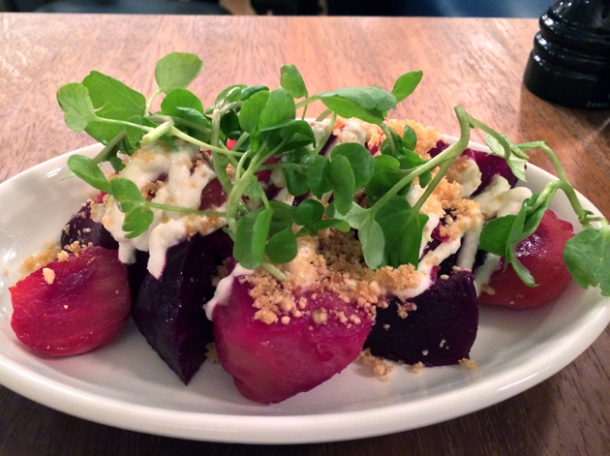 Foxlow may have been a bit shaky on the vegetables, but it was firing on all cylinders when it came to the iberico pork pluma, a cut of pork from the shoulder section of the loin (unless I’m mistaken). Cooked rare/medium rare, the tender and pink slices of pig were a little sweet and lightly seasoned with pepper and crunchy salt. Although it wasn’t quite as deeply flavoursome as the iberico pork cooked medium rare sometimes available at Pizarro, it was still a deliciously satisfying, yet simple dish.

I’ve never been a huge fan of sundaes, but I was lured into trying the chocolate and popcorn sundae by my friendly and informative waitress. The bottom layer of caramelised popcorn was topped by a mildly sweet layer of melted chocolate. On top of that was a massive seam of soft serve ice cream studded with even more popcorn, this time individually dipped in chocolate. Although initially pleasing, the massive portion meant that I quickly became bored – the excessive lashings of ice cold soft serve and so-so chocolate became monotonous very quickly. 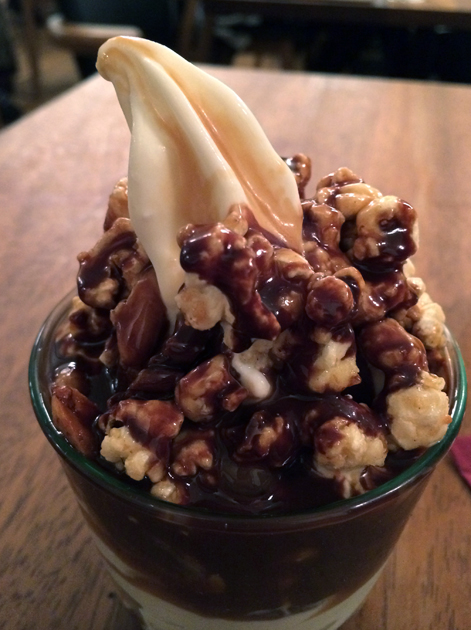 I returned to Foxlow for a third and final time, with the Euro Hedgie tagging along for the ride once again. Our seafood starters were an unimpressive duo.  The Hedgie’s salt and pepper squid was firm, but very lightly seasoned and battered in a rather uninteresting coating that was at least crisp. 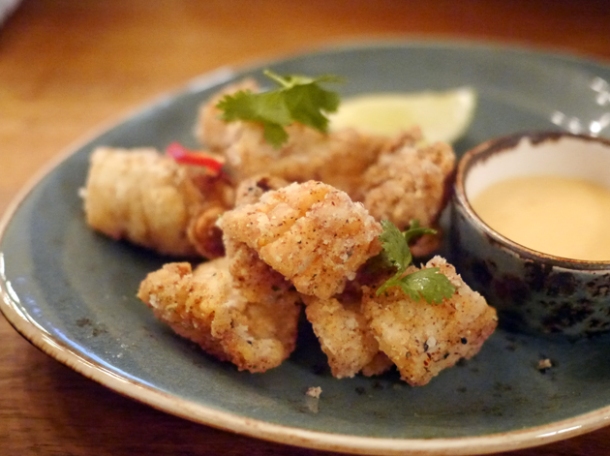 Bitty head meat was used in my crab with devilled mayo. I would’ve preferred a claw or two, but the head meat was at least pepped up by some coriander and chilli slices. This is just as well as the ‘devilled mayo’ seemed to be nothing more than the seafood sauce you’d find in a prawn cocktail.

Surprisingly, the Hedgie once again opted for a non-red meat dish as his main course. The imam bayidli, a Turkish dish, resembled ratatouille – a hearty heap of assorted vegetables, but it was difficult to make out the smoked aubergine that was supposed to be at the centre of it all.

The Euro Hedgie doesn’t like my naff puns. He can bite me.

Beef short rib with kimchi may sound like a bizarre combination, but Hawksmoor did pioneer the kimchi burger to great effect and success. This particular combination of barbecued Jacob’s Ladder and fermented Korean cabbage didn’t start well, but it quickly grew on me. The short rib could’ve done with a more flavoursome rub, but the charred bark was tender giving way to meat that was tender, lightly smoky and intensely beefy. It was also relatively dry due to the noticeable lack of fat, but the combination of tender beefy strands, collagen and tart kimchi that grew in spicy heat with every subsequent mouthful was ultimately an effective main course.

Another meaty success was the side dish of onion stuffed with sausage meat. The moist, hefty meatball, which the Hedgie confidently proclaimed to be a mixture of pork and beef, was very moreish. This was only enhanced by the thin, meaty, lightly tangy gravy and the thin, whole layer of onion used as a wrapper.

Foxlow must have a massive reservoir of soft serve ice cream as both my dessert and the Hedgie’s came with the stuff even though neither of us ordered a sundae. The Hedgie’s banoffee split came with the fruit sliced in half and arranged around the sides of a plate with a massive dollop of soft serve ice cream, melted chocolate and sweet, crunchy macadamia nuts in the middle. It was a rather middling dessert, with the caramel-ish ‘toffee’ effect most pronounced when the ice cream had melted a bit, mixing more easily with the chocolate and macadamias but even then it was pretty weak. 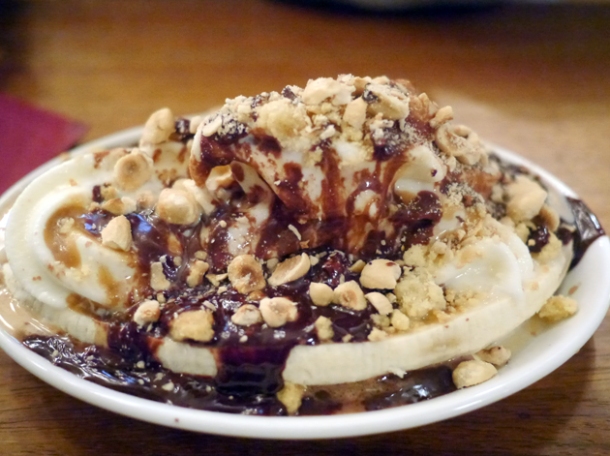 My cherry pie arrived in a small meat pie dish with a dollop of soft serve ice cream drizzled in cherry sauce on the side. Underneath the thin, crispy crust was a pool of tart, squidgy fruit that almost resembled cranberries. Ironically, the cherry sauce on the ice cream tasted far more cherry-like than the actual fruits themselves. Although disappointing, mixing the hot crust and fruit with the cool ice cream together into a creamy, crispy sweet gloop proved to be a reasonably satisfying consolation prize.

No cherry on top. 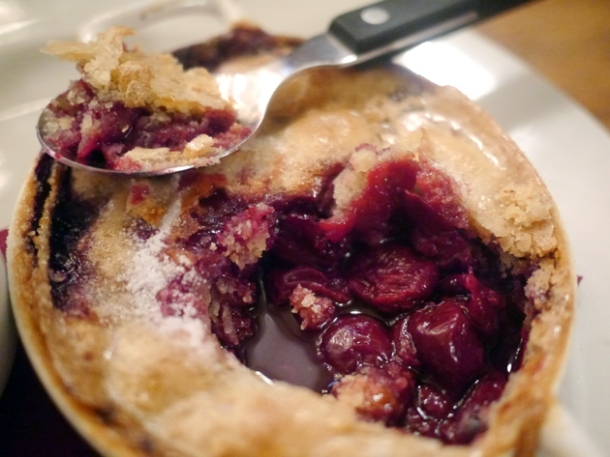 Foxlow was, overall, a disappointment. While far from bad, most of the dishes felt like half-finished experiments that needed a little more finesse or at least more development time in a test kitchen somewhere. The vegetable dishes in particular need more work, while the desserts felt oddly-retro as if they were designed to appeal to nostalgic adults hankering for the desserts of their youth, but slightly reimagined. There were a few highlights – namely the beef shortrib, bacon rib and iberico pork pluma – but equivalents that are just as good or even better are available elsewhere. Foxlow, like a good cut of beef, may get better with age but for now St. John, its competitor down the road, doesn’t have anything to worry about.

Average cost for one person including soft drinks and service: £40-50 approx.