Season, as its simple name suggests, tries to use only ingredients that are in season and can be sourced from within the United Kingdom so the small menu changes monthly. This rather compact restaurant is located on a rather unattractive road near Finsbury Park that’s otherwise only notable for its motley selection of Halal butchers and wig shops. Still, the decor is charming enough and the staff are disarmingly friendly and distractingly attractive.

Apparently there used to be a Stroud Green railway station.

Given Season’s name I thought I’d dabble in an experiment – a review of four meals, one for each season. One thing that doesn’t change, no matter the time of year, is the hearty, crusty chunks of soda bread for the table. I have a soft spot for soda bread, so they’re already off to a good start.

I love me some soda bread.

My first meal at Season started strangely with an odd starter of strawberry nachos with guacamole. Despite my fears of an Old Dairy-style abomination, the deep fried nachos were surprisingly inoffensive and proved to be a good way of shovelling the creamy guacamole and the sweet, flavoursome and surprisingly complimentary mixture of fresh tomatoes and strawberries into my mouth. The drizzling of peppery olive oil enhanced the sweetness of both, rather than obscuring them. This turned out to be a surprisingly good starter, although the nachos are just there to grab your attention – the strawberry-tomato mixture and the guacamole work just as well with the soda bread.

If you squint the nachos almost look like samosas.

Spring Hen may sound like some kind of poultry, but it’s actually a vegetable and here it’s been paired with lettuce in a risotto. This might sound like a stodgy, heavy dish but while it was creamy and warming, it was also surprisingly light. The small grained rice was soft and scented with saffron, while the musky, earthy green leaves and the slightly bitter, peppery radicchio added even more flavour. 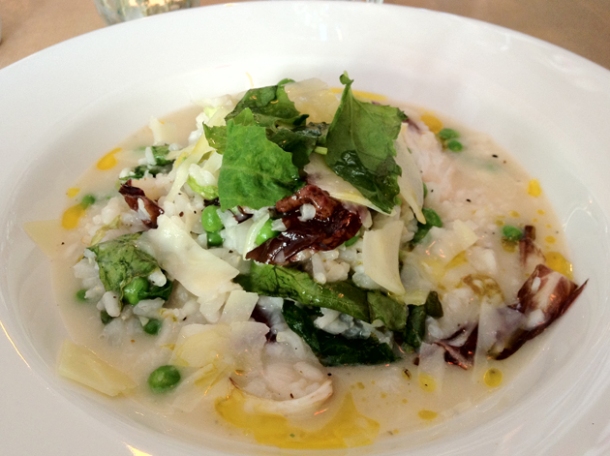 Putting a spring into my step.

The courgettes roasted in saffron oil was an ideal accompaniment – soft, buttery and fragrant.

At least one of my five a day.

Rhubarb can be difficult to poach well, but the fibrous slices here were expertly cooked so they were neither too soft nor too firm and tough. The frozen custard tasted predominately of vanilla with ginger hints – most of the ginger taste came instead from the crisp biscuit cup in which the dessert was served, but even this wasn’t especially flavoursome. It’s a shame that a dessert that started out so well ended up petering out. 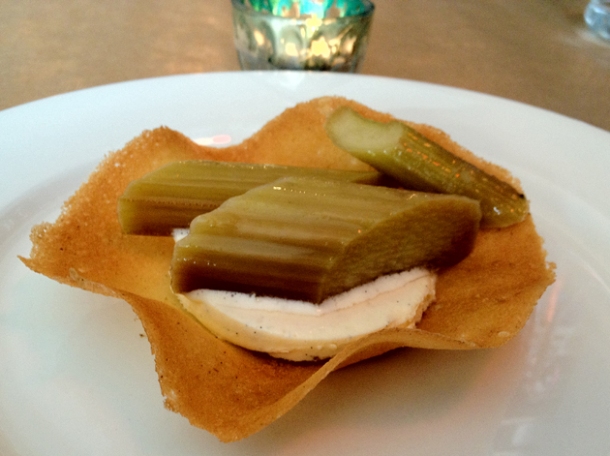 Rhubarb and custard, not Roobarb and Custard.

The kitchen at Season clearly has an inventive streak. Last time this streak manifested itself in the form of strawberry nachos; this time around it was a starter of chilled nettle soup with horseradish creme fraiche. A chilled soup is an ideal starter for the warmer summer months. It was not only refreshing, but also had a slightly sharp, bitter herbiness to it. A nice contrast to the chilled soup was provided by the mild heat of the horseradish creme fraiche although a little more of it wouldn’t have hurt.

In comparison to the starter, my main course of lamb casserole seems much more pedestrian, but this dish was just as deserving of praise. The tender medallions of lamb were tasty, but they almost played second fiddle to the lip-smacking broth of carrots, peas, baby potatoes, runner beans and mint. I could happily have slurped up two bowls worth of broth without the lamb.

Almost more of a vegetable soup with lamb then a lamb casserole, but that’s no bad thing.

The crispy, crinkle cut chips provided a good helping of starch, although they were too oily for my liking.

I’ve never been a fan of Eccles cake and Seasons’ rather stodgy, bland version isn’t going to turn me into one. The forgettable buttermilk and orange parfait didn’t leave much an impression either – this passive, uninteresting dessert proved to be brutally anticlimactic following the first two courses which had been so good. 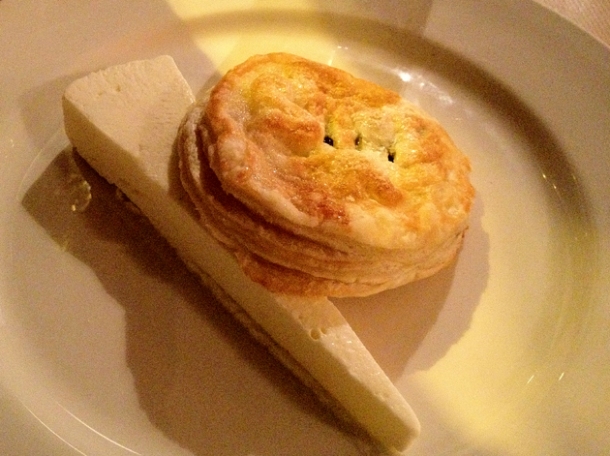 Truth be told, I much prefer Spring and Autumn to Summer if only because the weather is cooler and therefore doesn’t stifle my voracious appetite. Seasons’ pattern of quirky starters continued, although its effort this time wasn’t as successful as before – a pair of blowtorched sardine fillets served alongside its crispy skeleton. The crisp and brittle skeleton is edible, but there’s not much joy to be had from eating it – it’s more of an eye-catching gimmick. The squidgy, lukewarm fillets are interesting purely because of the citrusy sweet chilli sauce and the coarse sea salt. 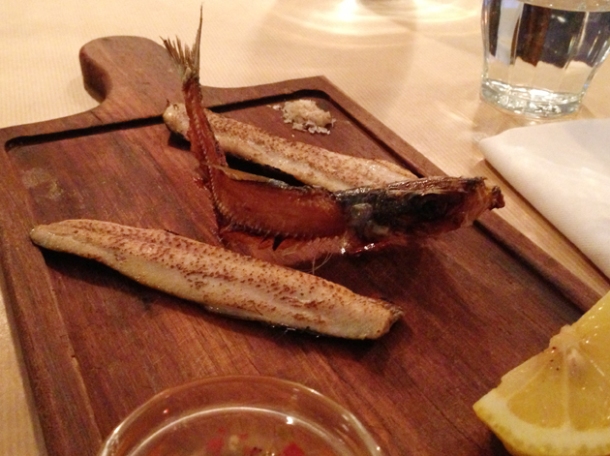 Put that skeleton back in your closet!

Pork neck served with butternut squash, kale and a cobnut brittle is just the sort of hearty fare I’d want on a breezy Autumn evening. Although the strands of meat were moist, tender, a little salty, a bit fatty and very porky (for the lack of a better term), the large slab of meat almost became a little monotonous after a while with little variation in taste and texture. The crackling broke apart easily on the first bite, but it was hard and chewy in places.

The sweet squash and the wrinkly kale more than made up for this though. The kale in particular had taken on some of the sweet honey and nut flavours of the brittle and proved to be incredibly addictive. The brittle itself wasn’t actually brittle – it was more chewy and a little viscous. I almost wished it was a little softer so I could rub its lip smacking flavours into the pork.

Thankfully not a pain in the neck.

The courgettes roasted in saffron oil were just as good as they were back in the Spring.

Sadly, like the Eccles cake back in the Summer, the blackberry Eton mess was rather forgettable. Although sweet and creamy enough, there weren’t enough meringue pieces. What pieces there were lacked the gentle chewy consistency that helps make the Eton mess such an enjoyable dessert. 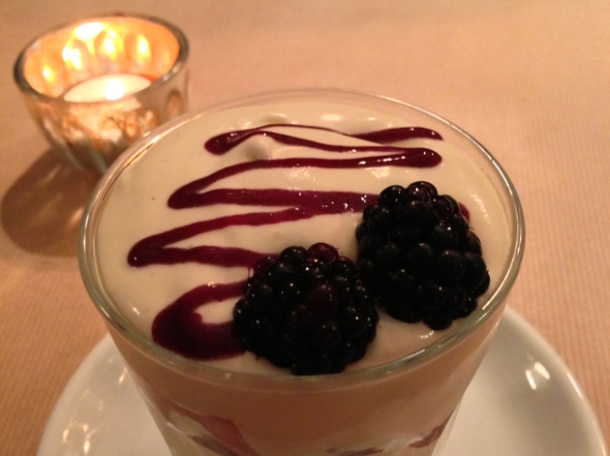 Do they serve Eton mess at Eton?

With the exception of the blowtorched sardines, I had yet to try any of Season’s seafood dishes so I dedicated my Winter dinner to the kitchen’s aquatic creations. My starter of chargrilled oysters were squidgy and very brine-ish which some will find unpleasant. Each oyster was doused in creamy buttermilk but this didn’t really suit the thin little molluscs. An unpromising start. 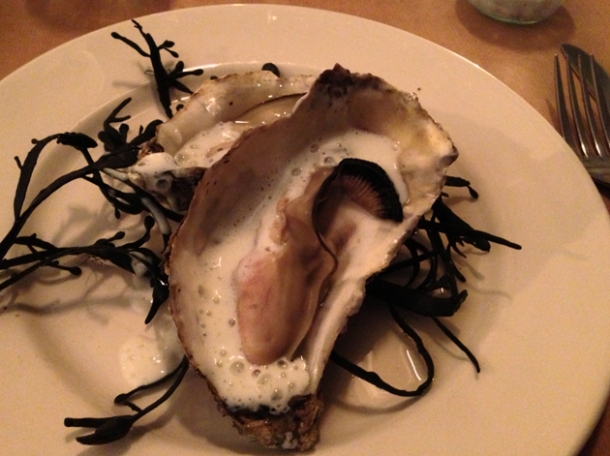 My fish broth main course wasn’t quite what I expected, but that didn’t make it bad. The thin, slightly opaque broth was a mildly moreish one dotted with chunks of root vegetables, cod, smoked haddock, mussels and sea bass – although some of the fish chunks were very bony which required a little caution when eating. What truly made the broth stand out though was the accompanying toast topped with squid ink mayonnaise. The creamy, bitter and slightly sweet spread almost resembled chocolate and proved to be both very addictive and a surprisingly complimentary accompaniment to the chunks of fish.

Just give me a jar of that squid ink mayo.

Of all my desserts at Season, the Winter one was easily the best. The parsnip tart tasted almost like raisins or carrots – hearty and sweet with a hint of nuttiness to it – while the pastry itself was dense and didn’t crumble under the slightest pressure. The ice cream served alongside it had apparently been flavoured with vodka which is an odd choice considering vodka is usually flavourless and odourless. The ice cream wasn’t even very boozy, but its thick milkiness almost resembled clotted cream and proved to be a refreshingly light counterpoint to the dense, sweet tart.

The food at Season is far from perfect – seafood and desserts in particular are not the kitchen’s strong points, while vegetables and meat appear to be its forte. Even so, I can’t help but be taken with many of the deceptively simple yet surprisingly tasty dishes. Some may be attracted by Season’s apparent dedication to sustainable, seasonal produce, but even if that wasn’t the case this restaurant would be still be well worth seeking out.

It’s no stretch to say that Season is one of the best restaurants in the neighbourhood and it’s justifiably popular so reservations are highly recommended.

Average cost for one person including soft drinks: £30-35 approx.