Meza is a long-standing bar in London’s Soho and it’s the last place I’d expect to find an Indian restaurant. Nestled in a corner of the bar itself, eating at Carom late in the week is a cacophonous experience – the loud, buzzy music, including a live sitar player on one night, won’t suit everyone and it put me in a seriously bad mood. Dining earlier in the week is similar to eating in an empty, garishly decorated community centre hall – the giant stuffed toy tiger is especially incongruous.

Speak up sonny, I can’t hear you!

Almost as irritating as the bar and atmosphere (or lack of it) is the staff. While the manager is helpful and friendly, the rest of the staff vary from brusque and silent to deeply annoying in their attempts to upsell me to more expensive dishes. One was border-line hostile. Dishes came out at a rapid fire pace, although service did slow down when it came to ordering dessert and getting old dishes cleared.

On my first visit to Carom I started off with the potato and corn cakes. Despite the visible corn kernels, the soft, fluffy and fragile cakes tasted more of potato than corn. The accompanying tomato chutney was a bit too thin and resembled more a ketchup or sauce than a chutney, but it added a touch of spicy sweetness to the otherwise uninteresting cakes.

The tiger prawns were fresh, but a little overcooked so they were too soft for my liking. They were very garlicky though and the accompanying sauce added another layer of flavour with its strong hints of coriander and tumeric.

Pork doesn’t turn up very often on Indian menus for obvious reasons, so I had to have Carom’s dry pork dish. I wasn’t expecting much, so I was pleasantly surprised by the smoky, peppery flavour and mild heat of the tender meat as well as the sweet, slightly sharp edge courtesy of tamarind and fennel.

A good accompaniment was the tandoor bread selection which consisted of a few chappatis and rotis which were fluffy and thankfully not greasy. 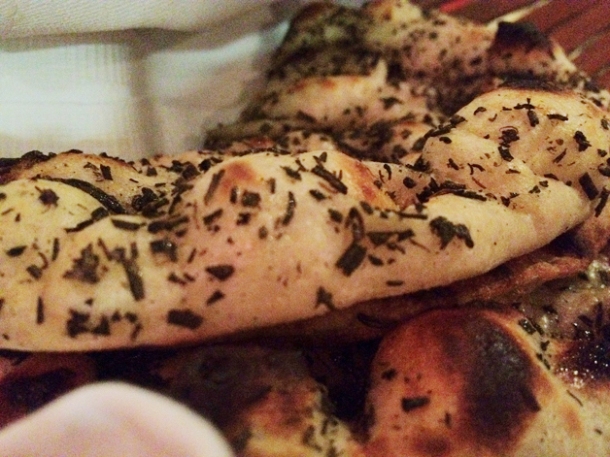 I wasn’t expecting to find a mango and cardamom creme brûlée on an Indian restaurant’s menu, especially one where the rest of the dishes were solidly traditional. The texture of the brûlée was gently wispy, but it tasted little of either mango or cardamom. This dessert was saved by the accompaniment of the smooth, boldly flavoured pistachio sorbet while the dusting of crunchy pistachio crumbs added a pleasing variation in texture.

Apart from the dry pork dish, I was unimpressed with my first meal at Carom, but I was willing to give the place a second try. On my second visit I started off with the fried tilapia. I wasn’t expecting the tilapia to turn up as a series of fish finger-like fillets. They were ungreasy and were light and fluffy, if somewhat lacking in character. I wasn’t impressed with the watery tomato chutney or the identikit mint yogurt sauce either.

The Lucknow lamb took the form of a kebab, although the taste of lamb was drowned out by an excessive amount of tumeric and garlic seasoning. A one-dimensional and ultimately unsatisfying dish.

Far more impressive than either of my starters was my main course. The beef sukha was a dry dish with little sauce, but it was by no means flavourless. The texture sat somewhere in between that of stewed beef and beef jerky and it had a dry, peppery heat. The most noticeable and enjoyable thing about this beef dish was its sweet tang courtesy of coconuts and dried banana chips. This sweetness may sound odd, but it wasn’t overpowering and complimented the dry, peppery heat surprisingly well.

The peshwari naan was just as satisfying. The fluffy bread was stuffed with a creamy and nutty filling of coconut and almonds that proved to be an ideal accompaniment to the beef sukha.

I’m a big fan of rice pudding and I wasn’t disappointed with Carom’s version of this classic Indian dessert. Following the northern Indian tradition, the rice pudding here is served cold but this shouldn’t put you off. It’s very creamy and nuttily flavoured with cardamom and pistachio and a strong, sweet undertone of rose water. This sweetness was enhanced by the presence of raisins which were so juicy, I suspect that they had been rehydrated. 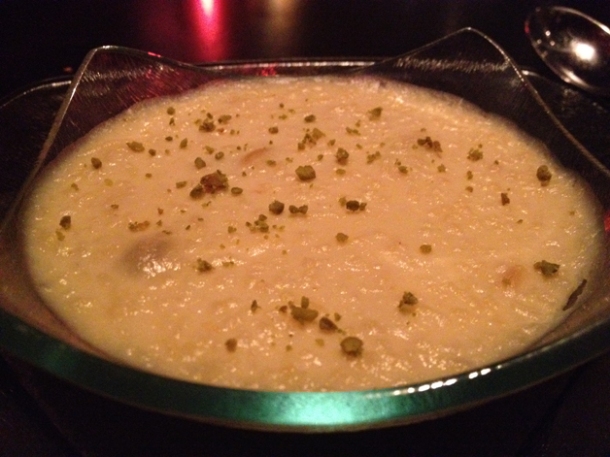 What is the matter with Mary Jane?

I didn’t intend to return to Carom for a third time, but a need for a filling feed after a late night at the day job prompted me to drop by the place once more. After two previous visits without having one, I thought it was about time I had a ‘proper’ curry with sauce rather than just a dry meat dish. I opted for the sea bass curry and although the fish was certainly fresh, the excessively soft, flaky texture was a little disappointing. Oddly, the sauce itself was surprisingly reminiscent of Thai curries with its lightness and tangy, zesty flavour indicative of kaffir leaves.

Now you sea it?

Instead of ordering bread as I had done on my previous two visits, I opted for rice in the form of the lamb biryiani. I’ve never seen the attraction of biryiani, but Carom’s version may well turn me around. The soft fluffy, zesty rice is dotted with moist, tender chunks of lamb and it’s all topped by a fluffy, buttery yet thin pie-like crust. 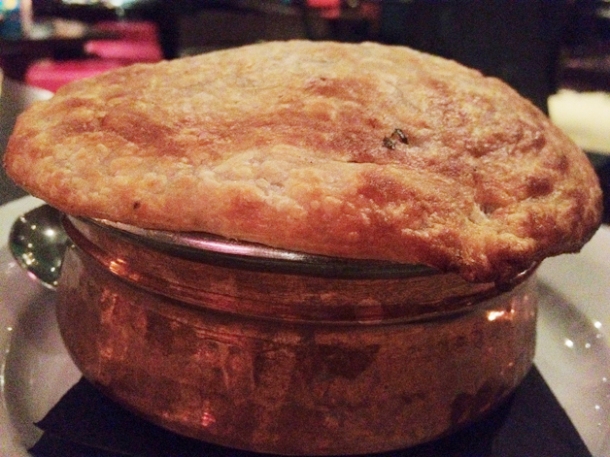 My side dish of vegetable dumplings were served in a nutty and mildly sweet sauce that had a mild and intermittent heat that nonetheless lingered on the tongue. The most notable thing about this dish was the dumplings’ similarity to samosa filling – the fluffy balls of carrot, pea, chickpea and potato were uncannily samosa-like.

I was pleasantly surprised by the bread and butter pudding which was so different, both in style and execution, that I secretly wondered if it had been smuggled in from another restaurant. The bulk of the pudding was incredibly soft and silky while the burnt, chewy, sweet, caramlised corners added a delightful variation in texture. The pudding wasn’t lacking in flavour either as it had been gently spiced with fennel, the taste of which was enhanced by the ginger zing of the custard which somehow managed to very creamy, despite its milky thinness. A startlingly good dessert.

Where did you come from? 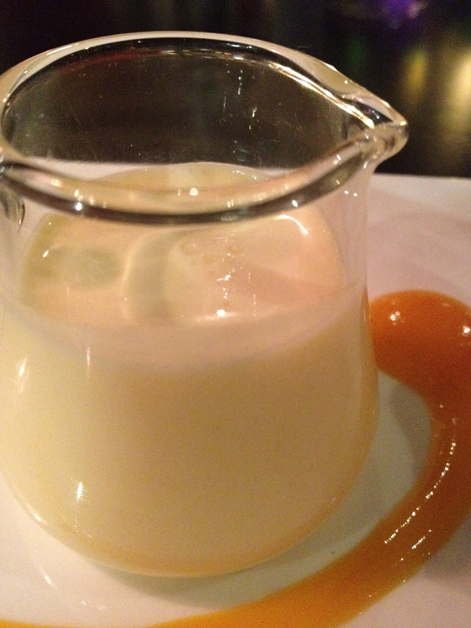 I’ve always had a thing for gingers.

Despite the relative brevity of the menu, the food at Carom can be surprisingly variable. Although some of the dishes, such as the dry meats and the bread and butter pudding, are very good, many others are mediocre or just poor. This inconsistent execution makes the price somewhat hard to stomach. Although far from unaffordable, it is pricier than a bog-standard curry house but without the quality service, pleasant surroundings and consistent execution to justify it.

Given the paucity of good Indian restaurants in Soho, Carom may be worth going to if you have a hankering for a reasonably-priced curry but can’t be arsed to venture further afield to get it, but be prepared to tread carefully through the menu.

Reservations: highly recommended on weekends and near the end of the week. Otherwise not necessary.

Total cost for one person including soft drinks: £35 approx.