Barcelona has more than its fair share of fine dining restaurants, but even in such a large city it’s possible to stumble upon some gems and Gelonch may well be one of them. It’s a small restaurant located on one of Barcelona’s less trafficked thoroughfares and would be easy to overlook. Judging from my weekend lunchtime visit, the clientele seems to consist almost entirely of locals.

Although none of the staff seem to speak much English, this is a good reason to brush up on your Spanish or Catalan and there is an English translation of the menu in any case. The décor isn’t anything to write home about, but it is colourful and airy despite the relatively small dimensions of the place. Oddly, dishes are passed through from the kitchen to the dining room through a small hatch – giving the kitchen a hidden, monastic air of secrecy.

Amuse bouche are supposed to tickle your taste buds as a sign of bigger things to come and Gelonch’s smorgasbord of palate teasers were certainly memorable. The lone oyster leaf topped with a drop of apple and sweet ginger sauce tasted mostly of apple, but it was nothing if not eye catching.

Barcelona is your oyster...

The words ‘mojito’ and ‘paper’ aren’t seen together in the same sentence very often. The fin-like sheaf of flavoured ‘paper’ didn’t taste much like a mojito, but the crisp texture was highly reminiscent of seaweed ‘nori’ sheets used in making sushi and its taste did remind me of buttery courgettes. The mojito paper was presented sticking out of a bowl of sesame seeds which was striking, but I ended up spilling seeds everywhere when attempting to spoon some into my mouth so it’s probably best enjoyed with one’s eyes.

The rose lychee button looked like a cross between a fried egg and a mutant oyster, but it tasted unmistakably of both lychees and rose water. Combined with the smooth, slightly squidgy texture, it was like a Turkish delight enhanced with lychee and could easily work as a petit fours.

Presses all the right buttons?

Although the fried onion paper bore a certain resemblance to a fried Chinese dumpling, it couldn’t have tasted more different. The smooth wafer thin pastry was delicately thin, giving way to an onion cream that wasn’t sharp as I was expecting, but mildly sweet instead. Think of it as refined crabless crab rangoon. 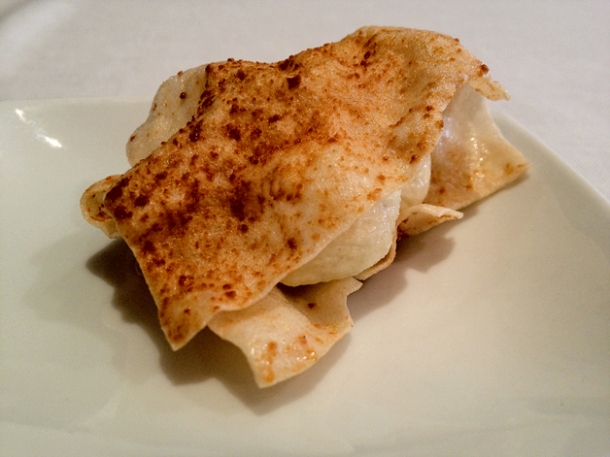 Foods flash frozen using liquid nitrogen are always fun and the liquid nitrogen carrot-flavoured popcorn here was no exception. The eye catchingly orange flakes tasted more of corn than they did of carrot, but the real pleasure lay in the smooth, cold, crisp, vaguely mergine-esque texture.

A small tuft of fluffy bread topped with a fried onion cream was surprisingly bland given the delicate and accomplished combination of onion and pastry in the earlier onion paper.

Burritos don’t often turn up on multi-course tasting menus. Rather than using a tortilla, the chefs at Gelonch decided to use a fluffy thick flatbread instead, which was wrapped around a filling of tender duck strips and tomato. It was all quite pleasant, but what really made this burrito come alive was the additional filling of rich and creamy foie gras slathered all over the duck strips.

Fusion cuisine has become so clichéd that it’s now something of a joke, but it shouldn’t be when it results in dishes such as Gelonch’s shiitake mushroom and jamon iberico soup. The meaty, earthy, salty soup was like a cross between miso and beef consommé. The plentiful slices of marbled, salty jamon added an extra layer of richness. Just underneath all the ham and silky mushrooms was a lone crab ravioli and I wish there had been more as it was not only stuffed with juicy, meaty crab but had an incredibly evocative salty seaside smell to it. A beautiful dish on so many levels.

The next course of bread topped with olive oil looked plain and perhaps even boring when compared to the preceding shiitake and jamon soup, but it had its own charms that became immediately apparent once I bit into it. The crisp, crumbless bread was more like a piece of savoury pastry than bread and the moreishness was enhanced by the fruity and mild olive oil. I could have quite happily eaten a whole basket of the stuff. 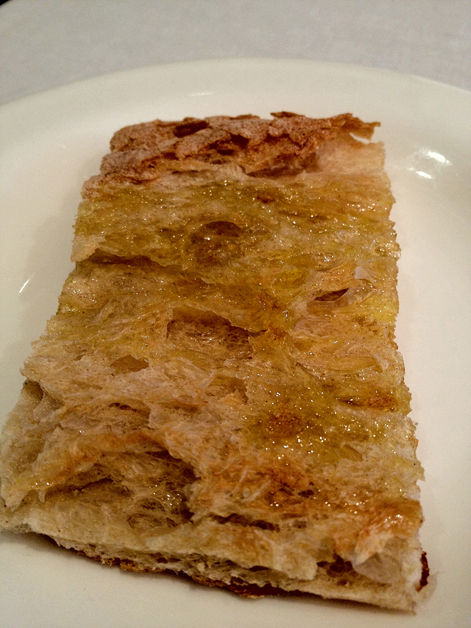 Given the startlingly exquisite quality of prawns available at some of Barcelona’s other high-end restaurants, the rather small, limp and lifeless crustaceans here were especially disappointing. They were livened up by the boozy, aniseed-like taste of pisco which was then counterbalanced by the sweet, herby, fruitiness of hibiscus.

Get your fokkin' tentacle out of my face!

Despite resting on a pair of delicately poached egg yolks and turnip cream, the veal marrow were surprisingly tasteless. The marrow was also a little too soft and formless, but the saving grace was the shavings of black truffle which added a wonderfully earthy fragrance that could only come from truffles.

Do the truffle shuffle!

For the Jolly Giant, Spanish food is all about pork – especially jamon hams – so I only wish he could have experienced the brilliance of Gelonch’s iberico pork. Cooked sous-vide for 24 hours, the pork was incredibly tender despite its firm appearance with delicate, quivering slivers of oozing fat and tendons that was made all the more sensual by the incredibly evocative smell of smoke that gently faded into the background as I tucked into this prime bit of pig.

The chunks of accompanying octopus tentacle had just the right amount of firmness so they were neither too hard nor too soft. Its neutral taste proved to be a far better vehicle than the already flavoursome pork for enjoying the gentle sweetness and spice of the honey vinaigrette and baked garlic sauce. A truly sublime dish that should be one of Gelonch’s trademarks if it isn’t already.

It was always going to be a hard act following the superb sous vide pork, but Gelonch some how managed it. The wonderfully coarse and offally veal sweetbreads was complimented by the smooth and salty cod innards. The flavour of both was enhanced by the earthiness of the small dollops of beetroot ‘gnocchi’, which was carefully balanced so it wasn’t overpowering. Excellent.

The final savoury dish of meal revisited sous vide pork one last time. Apparently cooked sous vide for 36 hours, the chunks of pig were certainly very tender and fibrous with a crusty, yet chewy skin. The pork was certainly enjoyable, but it lacked the flavoursome fat and intensely evocative smell that made the last sous vide dish so memorable. The earthiness of the accompanying mushrooms was enhanced by the rich, tangy gravy. It’s a good dish, but it nonetheless felt a little anticlimactic after the intense flavours, texture and smells of the preceding dishes.

Other restaurants may have separate sorbet and cheese courses, but Gelonch combines the two together and the results were intriguingly inventive if a little mixed in how satisfying they were. A baked aubergine sorbet tastes just as odd as it sounds. Its creamy texture was more like that of an ice cream than a sorbet and it tasted something like a cross between durian and olive oil. It was pleasing though, especially when paired with the delightfully sweet and tangy honey and banana cream and the coffee-flavoured crumble pieces.

The caramelised endive leaves were both sweet and a little bitter and seemed a little out of place with the ice cream, but was more at home with the cheeses. The intensely creamy and pungent French soft cow’s cheese, which was probably vacherin mont d’or, was much more satisfying than the rather limp and uninspiring Catalan soft cow’s cheese. Both proved to be quite delectable when eaten with the honey and banana cream though. 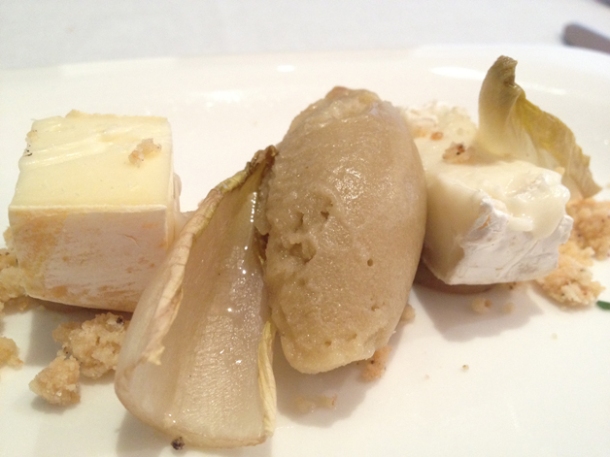 The first dessert had quite a lot going on and the second was only slightly less hectic. The odd combination of avocado and pistachio in the ice cream doesn’t sound like it should work, but it does. The combination of tangy, sharp avocado and nutty, salty pistachio was strangely addictive and was given an extra kick by the herby coriander crumble, sweet dried tomato and the mildly tart lemon custard.

The dessert chef clearly had a one-track mind as the third and final dessert was yet another ice cream. If you were expecting the ice cream’s toasted wheat flavour to taste like toast then you’ll be disappointed – it was more like cereal, an effect that was emphasised by the crushed oaty-tasting clusters.

This cereal-like taste was rather muted though and most of the flavour in this dessert came from the numerous citrus elements. The sugary sweetness of the candied blood orange was striking as was the tangy and sharp mandarin sorbet and the sourness of the grapefruit flecks. Without these citrus components, this dessert wouldn’t be nearly as tasty or as interesting.

The toast of the town?

A lesser restaurant might well have given up at this point and shoved the usual assortment of madeleines, truffles and macarons on a plate, but Gelonch still had one last flourish up its sleeve with the petit fours. This final course signalled a return to the fin-like presentation of the mojito paper with a dark chocolate fin protruding from a box of chilli and chocolate flakes. Accompanying the fin of chocolate is a fluffy and soft madeleine, but the taste really isn’t anything to write home about – it’s all about the eye-catching presentation. 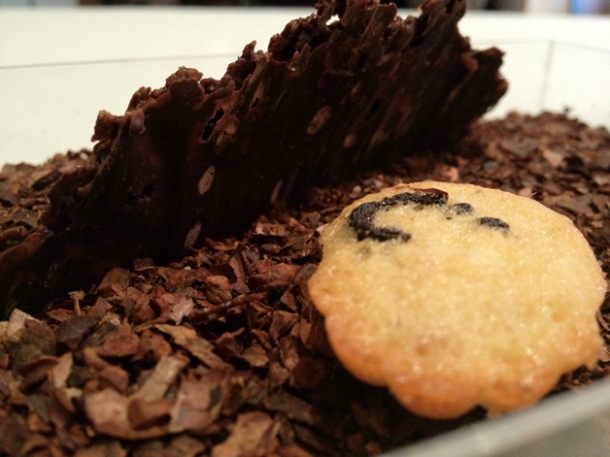 Despite a few missteps here and there, the food at Gelonch is impressive with some dishes truly bowling me over with their incredible combination of taste, texture and sometimes smell. It’s not quite as uniformly excellent as Moments, but eating at Gelonch is still a must on any food lover’s tour of Barcelona.

Total cost for one person including mineral water but excluding tip: €80 approx. (£66 approx. at time of writing)