There’s no shortage of fine dining restaurants in Barcelona and quite a few of the newer ones are opening or have opened inside plush hotels but Saüc is slightly different. Although now located inside the Ohla Hotel on Via Laietana, it used to be a freestanding restaurant situated on Passatge de Lluís Pellicer – a change yet to be shown on Google Maps (so be careful, smartphone navigators). The fine dining scene in Barcelona is fairly competitive though, so Saüc will need more than just a location change to distinguish itself.

This is especially true since, despite the shiny and plush surroundings of the hotel itself, Saüc’s own decor is rather plain and generic. The atmosphere is somewhat lacking too with loud groups of diners contributing to a comparatively cacophonous dining room. At least the service was friendly and efficient.

I expected something... more.

Saüc’s a la carte menu is rather haphazardly organised, so rather than navigate that mess I opted for the ten course tasting menu instead, although cheaper set menus with fewer courses are available. The pre-amuse bouche was nothing if not visually arresting with a green olive mounted on a metal stand – sadly the taste had been chilled out of it. The cube of black olive jelly sitting just beneath it on the hand was very strongly flavoured. This was just as well as the dollops of guacamole resting on a thin strip of fried potato left me cold.

Saüc seemed to have a bulk discount on crisps made out of root vegetables given the large, replenished bowl of the things resting on my table.

Does this count as one of my five-a-day?

It was hard tell where the amuse bouche ended and the starters began. The cauliflower cream was oddly reminiscent of crème caramel which wasn’t a bad thing as the smooth, firm texture was very pleasing – especially with its sweet, slightly sharp taste. The cauliflower cream was complimented well by the squidgy, slippery mushroom pieces which added a mild earthiness to the dish.

Sardines rarely appear on restaurant menus, never mind inverted sardines where the crispy skin is on the inside of the fish rather than the outside. It’s odd, but apart from a citrusy hint the fish doesn’t taste any different from the norm.

Kitchens in Barcelona clearly aren’t short of fresh, delicious prawns as my meals in Barcelona have shown. The lone raw prawn served here was sweet, plump and juicy. It’s served with some firm, buttery beans in a tangy, moreish, eggy sauce that compliments both the sweetness of the prawn and the butteriness of the beans. 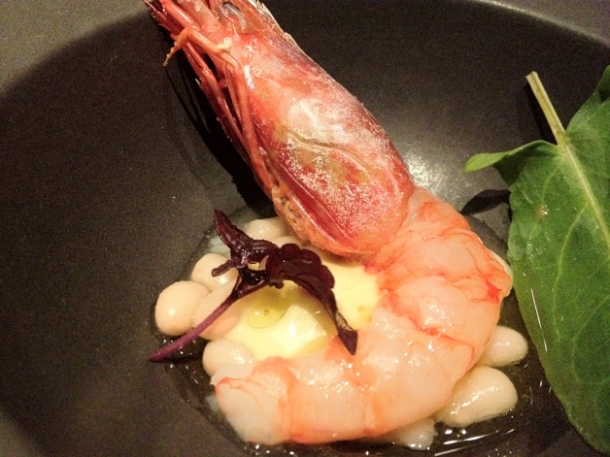 After eating in Barcelona, I may well become a prawn snob.

Savoury foods which have been chilled tend to lose their flavour, but this wasn’t the case with the icy cold, but sweet and juicy tomatoes. They’d been paired with a strawberry sauce which was very unexpected, but it worked surprisingly well with the sweet flavours of the tomatoes and strawberries playing off each other. The red fruits were complimented by the icy tang of a basil granita. The coldness of the dish was initially perplexing, but it quickly grew on me and is nothing if not very refreshing. 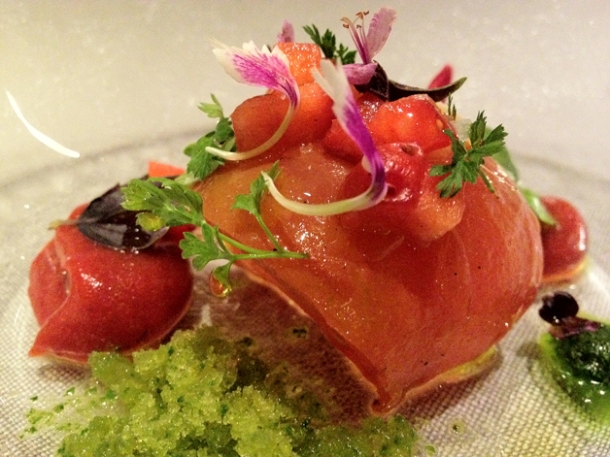 What must this look like to someone who's red-green colour blind?

The caviar dish didn’t really work. Both the small fish eggs and the dill were drowned out by the sharp tang of the apple dressing and the large heap of bitter leaves.

Apparently there's some caviar underneath all of that.

Squid and pork aren’t often served together, but here they compliment each other perfectly. The bold and tangy mildly caramelised chunks of pork blended seamlessly with the slightly salty scallop-like patty of squid. The puddle of artichoke purée added little though.

What is it with Spain and pork?

A single scallop might sound a little stingy, but it isn’t when it’s as plump and large as this one. The saffron butter added a tangy, rich edge to the firm scallop which is just as well as, despite being quite plump, it’d lost some of the flavour I would usually expect to find. The firm peas make up one of your five-a-day, but otherwise seem like last-minute additions.

As with most of the other Barcelona restaurants I’d visited, the dishes at Saüc had been coming out at a rapid fire pace barely giving me time to catch my breath. There was an odd lull between the starters and the main courses though – so long that I had wondered if something had gone horribly wrong in the kitche.

The fish paella did eventually arrive, but in a slightly unconventional stacked presentation. I couldn’t quite tell if the fish was turbot or another similar flat fish, but it was fresh, delicate and a little flaky. The real stars of the show, however, were the paella and the foam. The medium grained sticky rice was meaty and nutty, providing a perfect counterpoint to the fish. The foam didn’t actually taste of anything, but it added a wonderfully evocative salty seaside aroma.

Duck in mushroom sauce sounds like a rather dull dish, but that certainly wasn’t the case. The rich taste of the firm, fatty duck breasts was made even more decadent by the rich, tangy mushroom sauce while the shrivelled mushrooms themselves had a musky earthiness to them that was almost truffle-like.

After another unexpected lull, the final main course of pork with a smoked aubergine purée arrived. I wasn’t expecting another pork dish following the pork and squid starter, but this one proved to be quite different and especially enjoyable. The fatty, mildly nutty, slightly sweet fillets of pork were cooked rare so they were moist and incredibly flavoursome. Although the pork was served alongside burnt onions and a tomato purée, the only accompaniment that mattered was the aubergine purée. Its smoky flavour made the pork taste even more sensational.

After the stunning pork dish, the cheese selection proved to be anti-climactic and largely unmemorable aside from the small chunk of rich, creamy brie. The real highlight though was the accompanying slice of apricot and nut loaf which was sweet with oaty hints to it.

Despite its somewhat flamboyant appearance, the coconut ice cream was a surprisingly simple and straightforward dessert. The ice cream was suitably refreshing, while the slices of mango and passion fruit coulis added a tangy cloyingness, but the sharp edge of the dried pineapple cut through this sugary tang. A competent, if unmemorable dessert that should have perhaps come after some of the richer puddings that followed.

The rum baba was presented with the rum in a small jug separate from the small, light and fluffy sponge cake which turned out to be a very good thing as the rum was very potent. The sharp and refreshing strawberry sorbet and the red and black berries helped balance out this boozy richness, completing a fine version of this classic dessert. 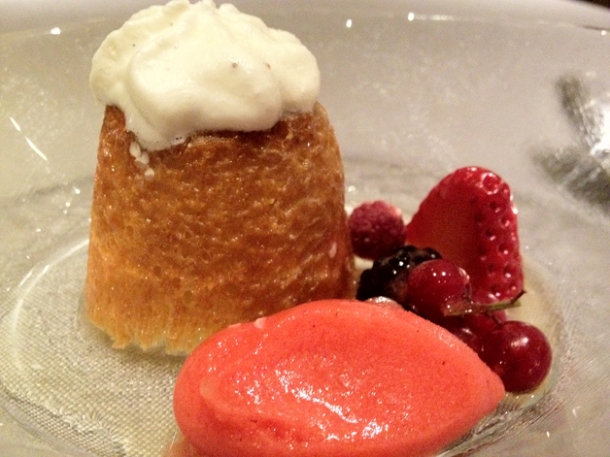 The desserts ended on a somewhat unadventurous note – a chocolate brownie with vanilla ice cream. The chocolate used in the brownie didn’t have much character, but the texture was about right sitting somewhere in between the fluffiness of a sponge cake and the smooth gooeyness of a ganache although it can’t quite match the silky decadence of a Paul A Young brownie back in London. The vanilla ice cream was, sadly, rather forgettable.

I was also non-plussed by the petit fours. Only the tart and sugary lemon marshmallow and the light and fluffy strawberry macaron were worthy of note.

Saüc is hard to judge. Odd pacing, plain decor and limp atmosphere aside, the food ranged from stunning to good to forgettably average. The stunning dishes are good enough to scrape in a four star rating, but in a city with competition like Moments, Cinc Sentits and Gelonch, the kitchen needs to stay on its toes and improve the consistency of its execution if it’s to remain a dining destination.

Total cost for one person including mineral water: €123 approx (£102 approx. at time of writing).