There’s an old cliché that second albums are more difficult for bands to produce than their debut disc. All sorts of factors are blamed, from newly inflated egos to overindulgent budgets. None of that appears to have affected Daddy Bao, the follow-up to the rather splendid Mr Bao in Peckham.

Although several times larger than the cramped original, the people behind Daddy Bao seem to have resisted the urge to spunk money up the wall and have instead concentrated on the things that matter. The menu is a tad larger, but still focussed on Taiwanese-style gua bao.

The larger premises not only have a personality of their own, while managing to stay on the right side of kitsch, but also have comfier seating. This might not have been possible had the proprietors been tempted by premises in more traditionally restaurant-filled parts of town, but Daddy Bao is instead located in Tooting. While Tooting isn’t short of good places to eat, most of those noteworthy restaurants owe their menus to the Indian subcontinent. Daddy Bao adds some much needed variation. 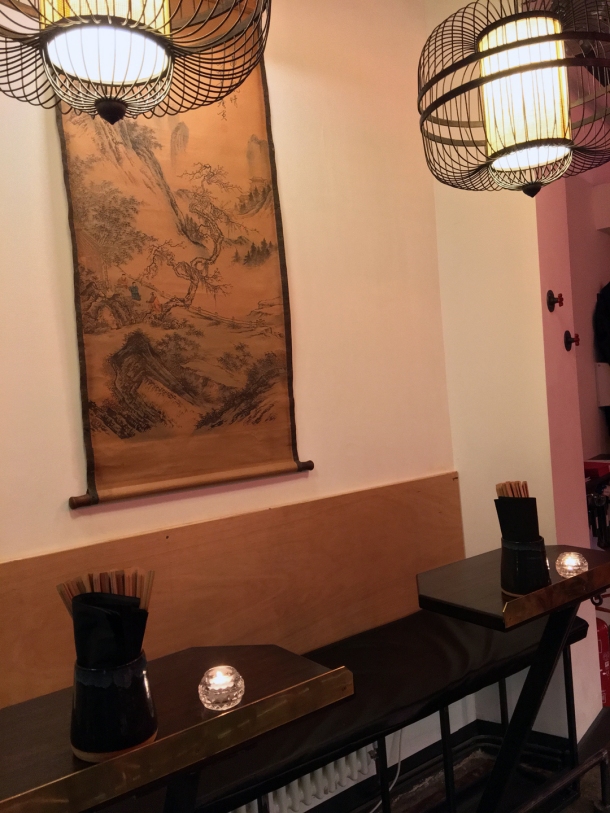 These are some of the single-seater perches. A bar with counter seating and other, more conventional tables are also available.

Taiwan has its own pickling tradition, not unlike that of neighbouring Japan. The smashed cucumbers could have been bolder and the accompanying chillies more potent, but I was still a fan of their light briney vinegariness.

Pork dumplings weren’t quite gyoza, but they weren’t quite jiaozi either – perhaps an unintentional reflection of Taiwan’s colonial history. Regardless, they were rather ineffectual and forgettable, which wasn’t helped by the tame chilli sauce on the side. 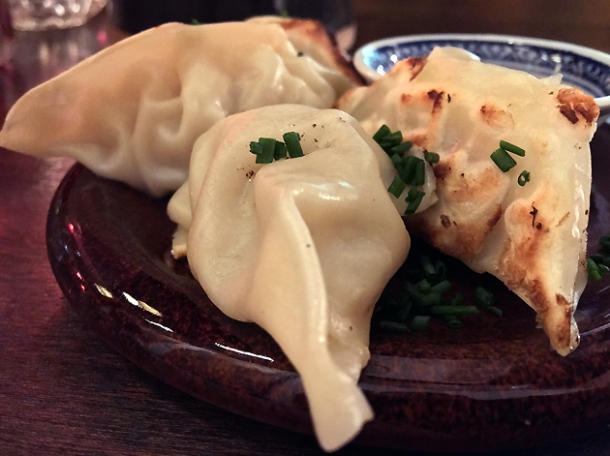 You’d be better off with a bag of frozen jiaozi from a Chinese supermarket or cash and carry.

Slices of fleshy, smoky and nutty sesame aubergine were far better. There’s still room for improvement though – the sesame sauce was a tad too thick and cloying. Sesame seed oil and paste may have worked better. 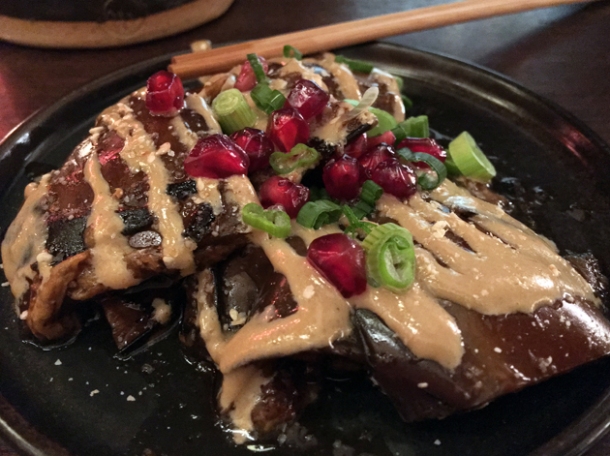 A special of eryngi mushrooms were suitably splendid. The meaty hoods and stems had a salty sour tanginess tinged with nutty hints.

A lack of contrast makes this already unappealing photo even more unphotogenic. Thankfully, you’re not that shallow.

All of the gua bao used fluffy and pillowy buns that were neither too flat and limp, nor too bulbous and squidgy. The plump mushrooms in the shiitake bao had been prepared quite similarly to the eryngi special – tangy and sour, but with a mild sweetness all their own. Sharp pickled onions ensured none of the shiitake’s boldly flavoursome qualities became too overwhelming.

Daddy Bao doesn’t serve dessert at the time of writing, which makes the neighbouring Polish off-licence with its unexpected bakery counting all the more intriguing.

Tofu bao came filled with lightly gingerish, tart and sour strips of lightly chewy, bready tofu. All of that was neatly complimented by chewy caramelised onions. The tofu was not only satisfying in its own right, but avoided the stereotypical tofu wispy, crumbly blandness that puts off so many Western diners.

A vegetarian dish that doesn’t imitate or ape meat. Who’d have thought.

Daddy Bao’s flagship pork belly bao was a thing of beauty. Thick slices of tender, unctuous meat ringed with quivering fat were a joy in of themselves. They were made even better by a tangy and sweet hoi sin-style sauce, mustardy greens and a nutty dusting. If you’re a carnivore visiting Daddy Bao, then this is a must have. 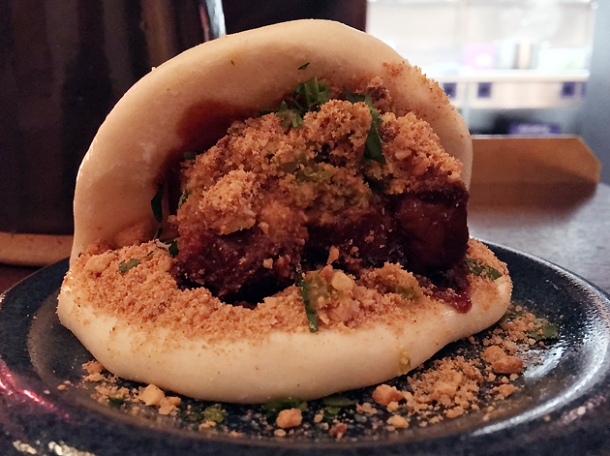 As with any Taiwanese restaurant worth its salt, Daddy Bao’s selection of Chinese and Taiwanese teas is definitely worth sampling. The warming Jin Xuan tea was so boldly flavoured, I almost suspected that its flavour had been boosted artificially. Buttery and malty with a caramelish, raisin-like undertone, it was as if someone had distilled a garibaldi biscuit into a cup.

Put the kettle on.

Kimchi was oddly textured – finely shredded in places, almost like a pounded paste in others. Even if it didn’t have a peculiar mouthfeel, it tasted mostly of sharp ginger rather than anything else. I would say that I’m disappointed, but I wasn’t expecting much to begin with from this starter.

Piping hot fried chicken needed more resting time. Although the chook meat was nothing to write home about, the batter was an altogether different matter. Crunchy, bubbly and moreish, it was truly superb and was neatly complimented by the lightly spiced bean sauce.

I suspect some rice flour was used in the batter.

Inevitably, the chicken poppers couldn’t live up to the standard set by the fried chicken. Effectively chive and chicken Swedish-style meatballs, they were far from bad – especially when taken with the tangy hoi sin-like sauce. I’d just much rather have another helping of the fried chicken. 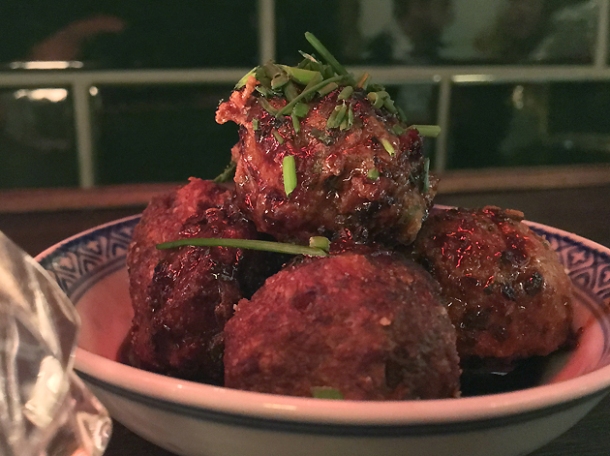 Once you pop, you can stop.

Pak choi was a bit too soft, as if it been cooked in the wok for a tad too long at too high a temperature. The delightfully nutty and moreish yellow bean sauce went some way to making up for this textural deficiency though.

The quality of the buns used in the gua bao was just as good as it was before. Prawn bao saw the crustaceans coated in a lightly crunchy batter. The prawns themselves had an odd sweet saltiness reminiscent of Quavers though. While these tempura-ish prawns were far from unpleasant (I’m quite partial to a bag of Quavers), a taste truer to the animal would’ve been preferred.

Bao filled with ‘three cups chicken’ bore little resemblance to that classic Taiwanese dish. The meat tasted more like pork floss, but with a generic meatiness that was quickly forgotten. 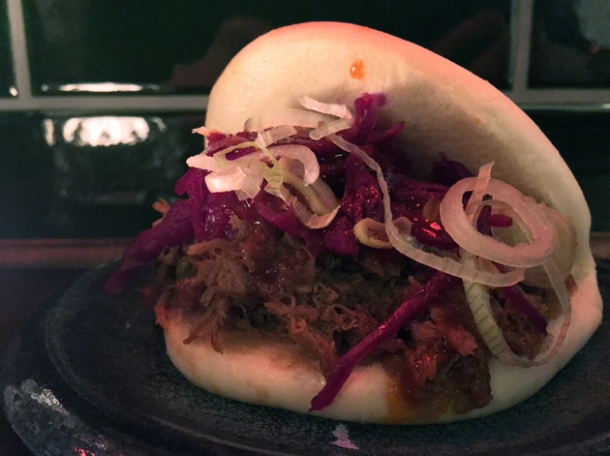 At least there was also some tart pickled veg inside this bao.

Brisket bao managed the neat trick of evoking Taiwanese beef noodle soup without a drop of soup or a strand of noodle in sight. Imbuing the sinewy, tender hunks of brisket with a tomato-ish umami, a slight spicy hit and then pairing it with some crisp, clean-tasting slaw was a deft sleight of hand. I heartily approve.

In lieu of some actual Taiwanese beef noodle soup, this will certainly do instead.

Comparisons between Daddy Bao and the JKS-backed Bao empire are inevitable. Both are superb. While the latter takes a modish approach with the precise use of some relatively pricey ingredients, Daddy Bao tacks more closely to tradition in attempting, with mixed results, to evoke other classic Taiwanese dishes and flavours in its gua bao and other dishes. Daddy Bao doesn’t always get it right though – it isn’t quite as meticulous or as deft as its more well-known counterpart. When it hits the spot though, the results are glorious to behold.

Thankfully, there’s more than enough room in this town for two gua bao flag bearers – especially with the Daddy Bao/Mr Bao duology located in the capital’s southern marches. Daddy Bao is a gem; Tooting-ites should consider themselves very fortunate indeed.

What to skip: Kimchi

Reservations? Probably a good idea. Highly recommended if there are more than one or two of you.

Average cost for one person including soft drinks and service charge: £35 approx.